*These authors equally contributed to this work

A comprehensive understanding of the oncogenic mechanisms associated with colorectal carcinogenesis is critical for the development of innovative therapeutic strategies to treat this disease. Colorectal cancer (CRC) is the third most commonly diagnosed cancer in males and the second in females, with an estimated 1.4 million cases and 693,900 deaths in 2012 [1]. The specific genes and molecular mechanisms triggering CRC remain largely unknown.

Human homeobox (HOX) genes belong to the homeoprotein family of transcription factors, which play critical roles in embryonic development, cell morphogenesis and differentiation [2, 3]. Humans harbor 39 different HOX genes from four groups (HOXA, HOXB, HOXC, and HOXD). Deregulated HOX gene expression has been reported in many cancers, including lung, breast and ovarian tumors, sarcoma and leukemia. Many HOX genes are involved in tumor cell proliferation, metastasis and angiogenesis, and levels of these genes are correlated with patient outcome [4]. Thus, HOX genes are emerging as key players in a variety of cancers and are potential markers for disease diagnosis and targets for novel therapies. However, the specific mechanisms by which HOX genes contribute to the tumorigenic phenotype are incompletely described.

Homeobox C6 (HOXC6) is reportedly overexpressed in breast [5, 6], lung [7] and prostate tumors [8], along with leukemia [9], osteosarcomas [10] and medulloblastomas [11]. HOXC6 is a candidate gene for early prostate cancer diagnosis [12], and upregulated HOXC6 has been associated with poor survival in gastric cancer patients [13]. Inprostate cancer cells, HOXC6 knockdown reduced proliferation by inducing apoptosis [8]. HOXC6 activated Ap-1 binding to JunD and promoted cell proliferation in pancreatic cancer cells [14]. HOXC6 is also deregulated in human head and neck squamous cell carcinoma and modulates Bcl-2 expression [15]. In addition to its functions in cell proliferation and survival, HOXC6 regulated MDR-1 transcription to govern multidrug resistance [16]. Although HOXC6 is differentially expressed in metastatic CRC [17], its expression profile, function and relationship to prognosis in CRC are largely unknown.

Autophagy, a process of self-digestion in mammalian cells, occurs at low basal levels for the purpose of homeostatic functions such as protein and organelle turnover. However, autophagy is rapidly upregulated when cells need to generate intracellular nutrients and energy, such as during starvation, growth factor withdrawal or times of high bioenergetic demand [18, 19]. The target of rapamycin, TOR kinase, is a key autophagy regulator and the major inhibitory signal that shuts off autophagy in the presence of growth factors and abundant nutrients. Downstream of TOR kinase, a series of autophagy-related genes (ATG genes) are essential for the execution of autophagy [20]. Recent discoveries have pointed to autophagy deregulation as a novel feature central to the pathogenesis of human malignancy, and the role of autophagy in cancer is both dynamic and highly complex [21]. 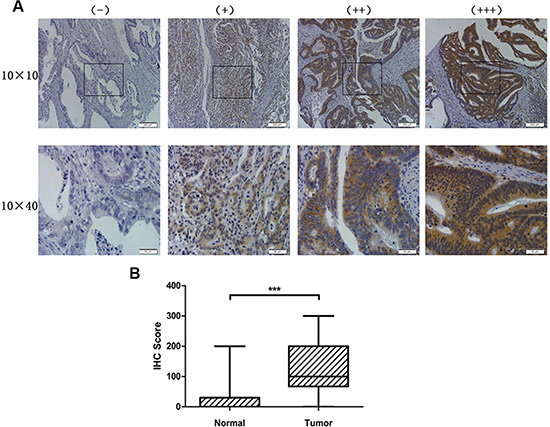 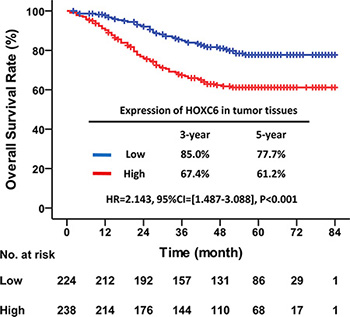 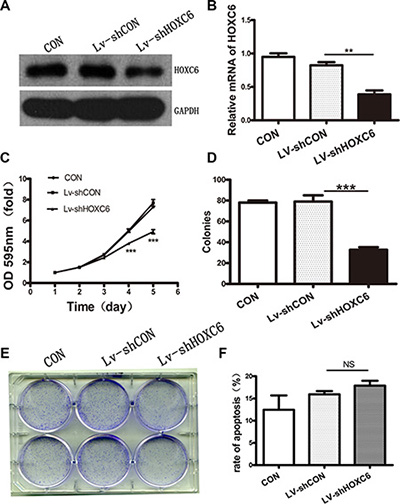 HCT116 cells stably expressing control or HOXC6 shRNA were injected subcutaneously into nude mice to form xenograft tumors. Eighteen days after injection, mice were sacrificed and tumor size was measured. HOXC6 downregulation reduced tumor growth rate (Figure 4A–4C). In addition, ki-67 expression, a marker of proliferation, was weaker in tumors infected with Lv-shHOXC6 as detected by IHC (Figure 4D). Taken together, these results suggest that HOXC6 may be a tumor growth-promoting oncogene. 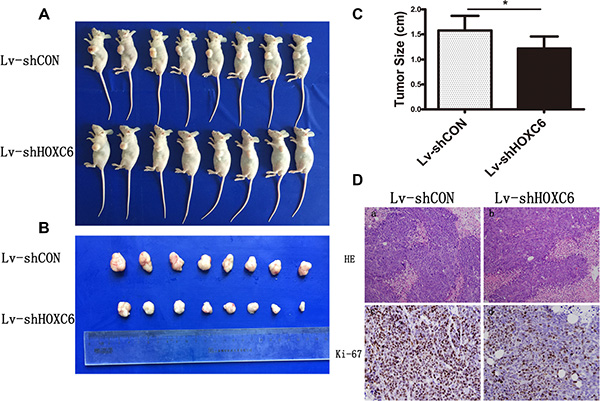 Figure 4: HOXC6 downregulation inhibited tumor growth in vivo. Representative photos of mice (A) and tumors (B) were taken after sacrifice on day 18, and tumor size was measured (C) *P < 0.05 compared with control group. Ki-67 expression in Lv-shHOXC6-infected tumors was less than in controls as shown by H&E and IHC staining (D).

Levels of the autophagy marker, LC3II/I, were decreased in shHOXC6-treated cells compared to controls, along with the autophagy-related molecules Atg5 and Atg7 (Figure 5A). A fluorescence assay using of a tandem monomeric mRFP- GFP-tagged LC3 is utilized to monitor flux, colocalization of both GFP and mRFP fluorescence indicates a compartment that has not fused with a lysosome, such as the phagophore or an autophagosome. In contrast, an mRFP signal without GPF corresponds to an autolysosome [23]. In our experiment, we found less red punta(mRFP signal only) in Lv-shHOXC6 than in control. The conversion process from autophagosme to autolysosome is suppressed which meant decreased autophagic flux (Figure 5C). In addition, defects in autophagy can cause accumulation of the autophagy receptor and substrate, STQSM1/P62. In our experiment, STQSM1/P62 was elevated. These findings agreed with mRNA levels measured by real-time PCR. Finally, the upstream mTOR pathway is a negative regulator of autophagy, and activation of mTOR suppresses autophagy [24]. We found significant upregulation of p-mTOR in cells infected with Lv-shHOXC6 (Figure 5B). Following treatment with rapamycin, an autophagy activator, reductions in cell proliferation were largely reversed. HOXC6 downregulation promoted mTOR activity, which in turn inhibited autophagy. 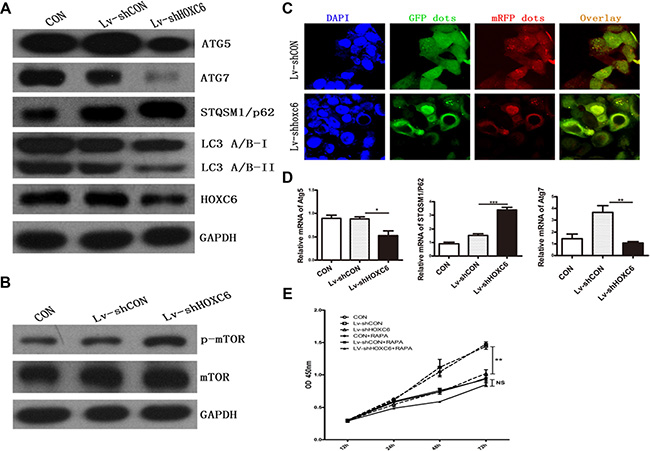 HOXC6 is crucial to epithelial cell development and proliferation in response to hormonal signals. Moreover, HOXC6 deregulation has been detected in several cancer types. Although HOXC6 is reportedly differentially expressed in metastatic CRC [17], the exact role of HOXC6 in CRC initiation and progression remains unclear.

To explore the function of HOXC6 in CRC, we knocked down HOXC6 in HCT116 cells via shRNA. Both MTT and colony formation assays showed that HOXC6 downregulation decreased HCT116 cell proliferation. In addition, HOXC6 knockdown suppressed CRC cell growth in nude mouse xenografts.

Previous studies show that the PI3K/Akt pro-proliferative pathway is regulated by the direct HOXC6 targets BMP7, IGFBP3 and PDGFRA [25–28], suggesting that HOXC6 may enhance cell survival through PI3K/Akt signaling. HOXC6 may also promote cell survival through regulation of androgen receptor (AR) signaling and repressed expression of filamin A (FLNA), a cytoplasmic actin filament crosslinker [8]. We hypothesized that HOXC6 knockdown-mediated CRC cell proliferation inhibition may be regulated by the autophagy pathway. Western blotting and RT-PCR results showed that autophagy flux decreased along with expression of autophagy-associated genes, such as Atg5 and Atg7. In contrast, P62/SQSTM1 increased. Autophagy is responsible for p62 degradation; therefore, autophagy impairment is usually accompanied by p62 accumulation followed by the formation of p62- and ubiquitin-positive aggregate structures [29–31]. Moreover, the mTOR pathway, which negatively regulates autophagy, was activated as evidenced by elevated phosphorylated mTOR relative to total mTOR. These findings together suggest that HOXC6 may promote CRC progression via regulation of autophagy.

Autophagy is thought to play a dual role in cancer: it can prevent tumor initiation by suppressing chronic tissue damage, inflammation and genome instability via its quality control function or can sustain tumor metabolism, growth and survival via nutrient recycling. Current evidence indicates that these roles depend on cancer subtype, tumor stage and other factors [21, 32]. In our study, HOXC6 downregulation decreased CRC cell proliferation and tumorigenicity, and both of these effects correlated with autophagy pathway inhibition. HOXC6 may induce autophagy, which then promotes CRC progression. Whether HOXC6 directly or indirectly regulates autophagy should be further explored. Our results also suggested that HOXC6 could be a potential therapeutic marker. In conclusion, HOXC6 was abundantly expressed in CRC tissues compared to adjacent normal tissues from a large clinical cohort, and was negatively associated with OS. In addition, HOXC6 downregulation decreased CRC cell growth and this effect was mediated by the inhibition of autophagy.

A human CRC tissue microarray (TMA) was constructed containing 462 paired tumor and normal mucosa tissues from patients recruited between June 2008 and October 2012 from Zhongshan Hospital of Fudan University (Shanghai, China). Clinicopathologic data were retrieved from our prospectively constructed CRC database. Prospective data collection and quality management were performed by an independent full-time research assistant. All patients received radical primary tumor resections. Tumor stage was determined according to the seventh edition of the International Union Against Cancer (UICC)/American Joint Committee on Cancer (AJCC) TNM classification. For patients without synchronous distant metastases, postoperative adjuvant chemotherapy was given according to the Chinese and NCCN colorectal guidelines. For patients with resectable synchronous distant metastases, radical resections were also conducted on the metastases. For patients with unresectable distant metastases, chemotherapy was given as treatment. No anti-EGFR, anti-VEGF or other targeted agents were used. Ethical approval was obtained from the Clinical Research Ethics Committee of Zhongshan Hospital of Fudan University. Signed informed consent was obtained from all patients for the acquisition and use of tissue samples and clinical data. OS was calculated from the day of surgery to the date of death due to CRC or last follow-up.

HOXC6 expression was measured in tumor samples using a Histostain®-Plus 3rd Gen IHC Detection Kit (Invitrogen, USA #85–9073) following the manufacturer’s instructions. The tissue microarray (TMA) slide was dried overnight at 37°C, deparaffinized in xylene, rehydrated through graded alcohol, immersed in 3% hydrogen peroxide for 20 min to block endogenous peroxidase activity, and then antigen-retrieved by microwave heating in 0.01 M sodium citrate buffer (pH = 6.0) at 100°C for 30 min. Subsequently, slides were pre-incubated with 10% normal goat serum at room temperature (RT) for 30 min to reduce nonspecific reaction. The primary rabbit anti-HOXC6 polyclonal antibody (ab41587, Abcam) was diluted (1:50) in phosphate-buffered saline (PBS) with 3% bovine serum albumin (BSA) and applied overnight in a humidity chamber at 4°C. Slides were incubated with a polymer peroxidase-labeled secondary antibody for 30 min at RT and then stained with DAB. Finally, sections were counterstained with hematoxylin.

Both shRNAs were inserted into the vector pFH-L (Shanghai Hollybio, China) between restriction enzyme sites for BamHI and EcoRI. The shRNA-harboring plasmid and two helper plasmids, pVSVG-I and pCMVΔR8.92 (Shanghai Hollybio, China), were transfected into HEK293T cells using Lipofectamine 2000 (Life Technologies, USA). Two days after transfection, cell culture media was collected and concentrated. The recombinant lentivirus was stored at −80°C.

HCT116 cells (200 cells/well) were seeded in 6-well plates 6 days after lentivirus infection. The medium was changed at 3-day intervals. After 8 days at 37°C with 5% CO2, cells were fixed with 4% paraformaldehyde and stained with freshly prepared diluted Giemsa stain for 20 min. Excess dye was washed off with double-distilled water.

All animal experiments were performed in accordance with NIH guidelines for the use of experimental animals. Male Nu/Nu mice, obtained from the Shanghai Laboratory Animal Center (SLAC), were injected left forelimb subcutaneously with 8 × 106 stable monoclonal HCT116 cells infected with lentivirus harboring either shHOXC6 or a control shRNA to establish a CRC tumorigenicity model. After 18 days, eight mice were sacrificed, and subcutaneous tumors were collected for analysis. Tumor size was estimated from the maximum diameter (cm) of the tumor.

Lentivirus-infected HCT116 were seeded on coverslips preprocessed in 40 μg/ml poly-lysine solution. mRFP-GFP-LC3 adenoviral vectors (HanBio, China) infection was performed according to the manufacturer’s instructions. After 48 h, cells were fixed with 4% paraformaldehyde and stained by DAPI. Autophagy was observed under a fluorescence microscope (Olympus fv1200, Japan). Autophagic flux was determined by evaluating the number of GFP and mRFP puncta.

Lentivirus-infected HCT116 were seeded in 96-well plates at a density of 3000 cells per well, then exposed to rapamycin(1 μM) and its control reagents. After treatment, 10 ul of CCK-8 agent (Dojindo CK04, Japan) was added to each well and incubated at 37°C for another 2 h. The optical density of the solution was acquired at 450 nm with a miroplate spectrophotometer (Bio-Tek Epoch, USA).

This work was supported by grants from the National Natural Science Foundation of China (81272390, 81372315) and the National High Technology Research and Development Program (2012AA02A506).

11. Bodey B, Bodey B Jr, Siegel SE, Kaiser HE. Immunocytochemical detection of the homeobox B3, B4, and C6 gene products in childhood medulloblastomas/primitive neuroectodermal tumors. Anticancer Res. 2000; 20:1769–1780.