Epidermal growth factor receptor (EGFR) is a receptor tyrosine kinase (TK). EGFR mutations lead to constitutive activation of downstream signaling pathways that promote cell proliferation [3]. EGFR mutations are present in 10% of NSCLC cases in North America and Europe, and more common (> 50%) among non-smokers, adenocarcinomas, and Asian patients [4]. The most commonly found mutations are in-frame deletions of amino acids 747–750 in exon 19 (exon 19 deletion), accounting for 45% of mutations, and exon 21 mutations resulting in the single-point substitution mutation L858R, which accounts for 40%–45% of such mutations [4]. Both exon 19 deletions and the L858R point mutation result in activation of the TK domain, and both are correlated with sensitivity to small molecule TK inhibitors (TKIs), such as erlotinib, gefitinib, and afatinib. Treatment with TKIs is correlated with a statistically significant and clinically meaningful response rate and prognosis [5]. Among wild-type EGFR patients, survival was superior in those who received first-line chemotherapy than those who received erlotinib first followed by subsequent chemotherapy (11.6 vs. 8.7 months, respectively), while the point mutation T790M in exon 20 is associated with poorer response and shorter survival [6, 7]. Thus, detection of EGFR mutation status is critical to determine an appropriate treatment strategy, especially for the administration of EGFR-TKIs as a first-line therapy. Additional studies have shown that different mutations are associated with varying clinical outcomes. For example, NSCLC harboring the EGFR exon 19 deletion may be more susceptible to TKIs as compared with tumors with the L858R mutation [8–10]. So, detection of EGFR mutation type is important to predict the effect of TKI treatment.

Currently, tumor tissue, which is usually obtained by biopsy or surgery, is the gold standard for detection of EGFR mutations. Unfortunately, most NSCLC patients are diagnosed at an advanced stage; thus, it is difficult to obtain tumor samples from non-operated patients. Additionally, sample preservation and tumor heterogeneity also hamper the use of tumor tissue for cancer sequencing, with different areas of the same tumor showing different genetic profiles (intratumor heterogeneity) [11]. So, genomic analysis from single tumor biopsy may underestimate the mutational burden of heterogeneous tumors [12]. Thus, development of new methods is needed for the detection of EGFR mutations in patients with little or no available tumor sample.

Therefore, we conducted this meta-analysis to investigate the diagnostic accuracy of cfDNA for detection of the two main EGFR mutations in tumor tissues in lung cancer. 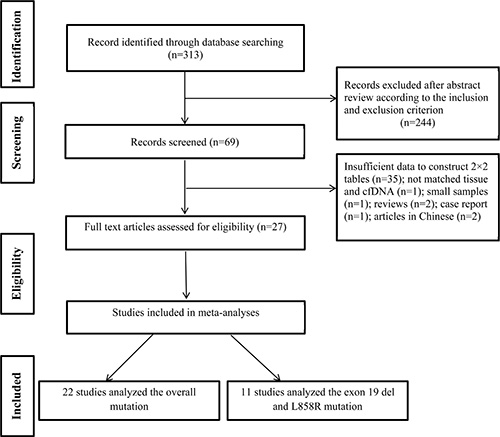 Deek’s funnel plots and p values were used to estimate publication bias. As shown in Figure 2, the p values for all mutations and the L858R point mutation were 0.46 and 0.86, suggesting no significant publication bias, while the p value of the exon 19 deletion was 0.03, indicating the likelihood of publication bias. Thus, we conducted sensitivity analysis and found that the pooled results were not affected by individual studies (Figure 2). 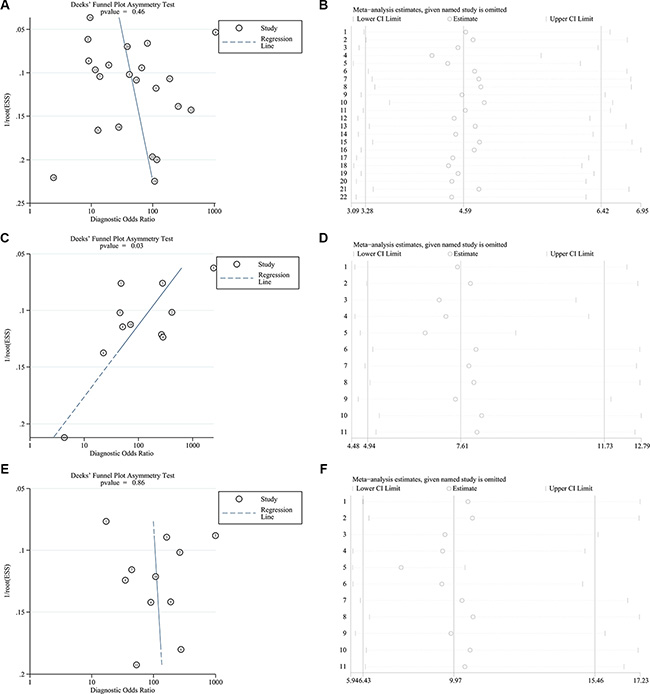 Figure 2: Deek’s funnel plots and sensitivity analyses of all EGFR mutations (A, B), the exon 19 deletion (C, D), and the L858R point mutation (E, F) in the pooled studies. 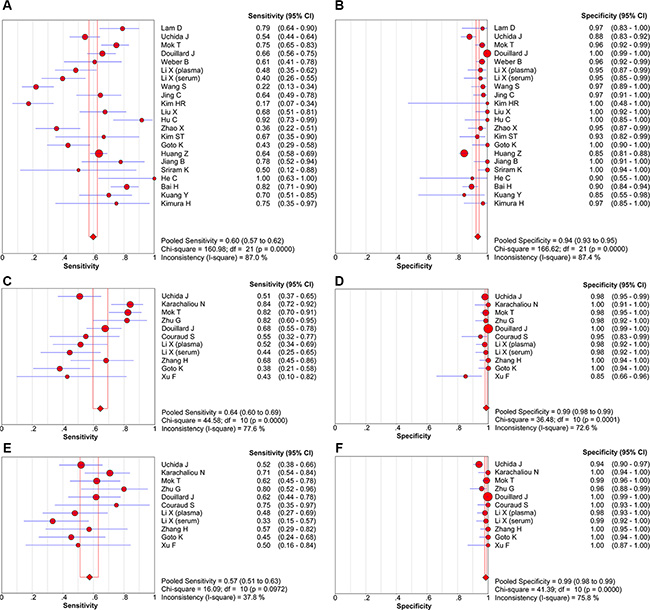 Figure 3: Forest plots of sensitivity and specificity of cfDNA for detection of all EGFR mutations (A, B), the exon 19 deletion (C, D), and the L858R point mutation (E, F).

Figure 4: SROC curves of cfDNA for detection of all EGFR mutations (A), the exon 19 deletion (B), and the L858R point mutation (C).

Spearman correlation coefficients and p values were calculated to assess the threshold effect using Meta-DiSc meta-analysis software [40]. The Spearman correlation coefficients for all EGFR mutations, the exon 19 deletion, and the L858R point mutation were –0.018, –0.255, and –0.055, respectively, and the p values were 0.938, 0.450, and 0.873, respectively, indicating that the threshold effect was not significant. As shown in Figure 3, the heterogeneity caused by the non-threshold effect was high, so we conducted meta-regression analysis to detect the source of heterogeneity. However, the results showed that the country, study size, detection method, and blood type did not contribute to heterogeneity (Table 4).

Table 4. Meta-regression with the covariates

cfDNA analysis is a noninvasive technique to predict patient response to EGFR-TKI treatment, dynamically assess treatment outcome, and facilitate early detection of resistance mutations. Que D et al. [41] reported that EGFR-TKI treatment significantly improved mOS in patients harboring the EGFR mutation in cfDNA than those that did not exhibit EGFR mutation (25.7 vs 13.5 months, respectively). Additionally, for EGFR mutations at baseline patients, Lee et al. [42] reported that the mOS was improved among patient with undetectable EGFR, as compared to detectable EGFR mutations in cfDNA (23.7 vs. 11.2 months) after TKI treatment for 2 months, in accordance with the findings of Mok et al. [15] who reported that the mOS for patients who continued to have detectable EGFR mutations at cycle 3 was 18.2 months and 31.9 months for patients without detectable mutations. The T790M point mutation is associated with acquired resistance to TKI therapy and reportedly occurs in about 50% of patients with disease progression after initial response to gefitinib or erlotinib [35]. As cfDNA had a high specificity to detect EGFR mutations, cfDNA might be a suitable noninvasive screening test to monitor T790M mutations during TKI treatment [35]. Lee et al. [42] found that 14 (28.6%) of 49 patients harbored the resistance mutation T790M in cfDNA during EGFR TKIs treatment, which is similar to the studies by Sakai et al. [43] and Sorensen et al. [44], in which the T790M mutation was detected in 21 (30%) of 75 and 9 (39%) of 23 blood samples from patients with clinical progressive disease. Most interestingly, several studies demonstrated that monitoring the EGFR mutations in cfDNA allows for the detection of the T790M mutation up to 344 days (range, 15–344 days) before radiographic documentation of disease progression [42, 44]. Additionally, Patients whose EGFR mutations switched from positive to negative after chemotherapy achieved a better partial response than patients with a reversal in mutation status [45], indicating that the high specificity of cfDNA could serve as an effective test to estimate the effect of chemotherapy.

Various methods can be used to detect EGFR mutations in cfDNA, such us allele-specific PCR (AS-PCR) [15], peptide nucleic acid-locked nucleic acid polymerase chain reaction (PNA-LNA-PCR) [18], amplification refractory mutation system (ARMS) [20], high resolution melting (HRM) [22], mutant-enriched (ME)-PCR [26], and denaturing high-performance liquid chromatography (DHPLC) [29]. Our results showed that the sensitivities of PNA-LNA PCR, AS-PCR, and HRM were higher than those of ARMS and ME-PCR, but the specificity of ARMS was the highest among the other tests. Analysis of methods for detection of EGFR mutations in plasma demonstrated that ARMS had highest specificity, as compared with the other methods [38]. Although cfDNA can be extracted from either plasma or serum, our results showed that cfDNA extracted from serum had higher diagnostic accuracy than that extracted from plasma (Table 3).

There were some limitations to this study that should be addressed. First, chemotherapy can change the EGFR status [45], which could lead to analytical inconsistencies between tissues and cfDNA in blood collected after treatment. Second, although we accessed the threshold effect and performed meta-regression analysis, high heterogeneity was detected, but none of the analyzed factors was found to be the source of the heterogeneity. Therefore, other factors, such as sex, smoking status, or tumor size may have been the cause of the observed heterogeneity. Third, publication bias was detected when the performance of cfDNA to detect the exon 19 deletion was analyzed; therefore, we conducted sensitivity analysis and found that the pooled results were not affected by the inclusion of individual studies.

In conclusion, cfDNA offers an effective and noninvasive method to detect EGFR mutation status in NSCLC. Due to its high specificity and noninvasive characteristics, cfDNA analysis presents a promising method to screen for mutations in NSCLC and predict patient response to EGFR-TKI treatment, dynamically assess treatment outcome, and facilitate early detection of resistance mutations.

A comprehensive search of the PubMed (http://www.ncbi.nlm.nih.gov/pubmed) and Google Scholar (http://www.scholar.google.com/) databases using the keywords “cell free DNA OR circulating DNA OR circulating tumor DNA OR serum DNA OR plasma DNA” AND “lung cancer OR non-small cell lung cancer” AND “EGFR OR Epidermal Growth Factor Receptor OR erbB1” was conducted to identify relevant studies published before September 28, 2015. In addition, the references from the retrieved articles that matched our inclusion criteria were manually searched.

The inclusion criteria for studies were as follows: (a) a histopathological diagnosis of NSCLC; (b) matched tissue and cfDNA sample; (c) identification of EGFR mutation status both in tissue and cfDNA; (d) sufficient data to construct a diagnostic 2 × 2 table; and (e) enrollment of at least 15 patients. Studies were excluded if they were: (a) not written in English; (b) tumor tissue and blood samples were not paired; or (c) case reports or reviews. Two of the authors (X.Q. and J.L.) read the titles and abstracts independently, and excluded studies that did not meet the inclusion criteria. Then, the full texts were screened to determine if they met the inclusion criteria.

The threshold effect was estimated with Meta-DiSc meta-analysis software [40]. A probability (p) value < 0.05 was considered to reflect a significant threshold effect. Heterogeneity due to a non-threshold effect was determined using the Q test and the inconsistency index (I2) test with p ≤ 0.05 and I2 ≥ 50% indicating significant heterogeneity. Meta-regression analysis was conducted to detect the source of heterogeneity. According to the heterogeneity test results, a random or fixed model was used to pool the sensitivity/specificity rates, PLR, NLR, DOR, and corresponding 95% CI. SROC and AUC were also calculated. Publication bias and sensitivity analyses were performed using STATA software (version 11.0; StataCorp LP, College Station, TX, USA), while all other analyses were performed using Meta-DiSc (version 1.4) meta-analysis software [40].

This study was supported by the National Natural Science Foundation of China (Grant no. 81270092).