Background: Neuregulins (NRG) are a family of epidermal growth factor ligands which act through binding to HER3 and HER4 receptors. NRGs are widely expressed in solid tumors. Their prognostic significance or their role as predictors of benefit from anti-HER3 therapy is not known.

Methods: A search of electronically available databases identified studies exploring clinical outcomes based on NRG expression, as well as placebo-controlled trials of HER3-directed therapy reporting results based on NRG expression status. Data were combined in a meta-analysis using generic inverse variance and random effects modeling for studies reporting the hazard ratio (HR) for overall (OS) or progression-free survival (PFS). Mantel-Haenszel random-effect modeling was used for odds ratio (OR) for 3-year and 5-year OS and PFS.

Conclusions: NRG expression is not associated with either OS or PFS, but is a predictor of benefit from anti-HER3 antibodies.

Neuregulins or Heregulins (NRG) are a family of the Epidermal Growth Factor (EGF) ligands that are widely expressed in solid tumors [1–3]. Four different genes named NRG-1, NRG-2, NRG-3 and NRG-4 code for more than to 32 different NRG isoforms [2]. The NRGs act by binding to the ErbB/HER family of receptor tyrosine kinases. Four different ErbB/HER receptors have been described in mammals: ErbB1/HER1/EGFR, ErbB2/HER2/neu, ErbB3/HER3 and ErbB4/HER4 [4, 5]. HER3 is the major NRG receptor [3, 5–7].

ErbB/HER receptors and their ligands have been widely studied in cancer and linked to oncogenic transformation [4]. They have also been the target for directed therapies, including monoclonal antibodies such as trastuzumab or pertuzumab against HER2, or cetuximab against EGFR; or tyrosine kinase inhibitors such as lapatinib against EGFR and HER2 [8]. Of note, therapeutic inhibition of these receptors has been linked to clinical antitumor activity confirming the oncogenic role of these receptors in cancer [8]. HER3 expression has been associated with worse clinical outcome, and agents trying to neutralize its activity are in clinical development [9]. The fact that NRGs are the main activating ligands of HER3 suggests that tumors with high levels of NRG could be those that respond better to anti-HER3 therapies [10, 11].

Expression of NRG in solid tumors

A total of 29 studies reported data on expression of NRG in solid tumors [12–40]. Characteristics of included studies are shown in Table 1. NRG was more studied in breast cancer (9 studies) and prostate cancer (4 studies) followed by colon and bladder cancer (3 studies for each tumor).

Association of NRG with clinical outcome 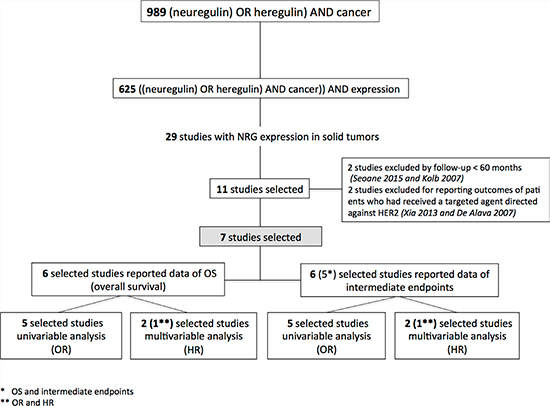 Figure 1: Flow chart for the selection of studies.

Figure 2: Forest plots showing association between NRG expression and overall survival. (A) Odd of survival at 5 years. (B) Hazard ratio for survival.

NRG and benefit from anti-HER3 therapies 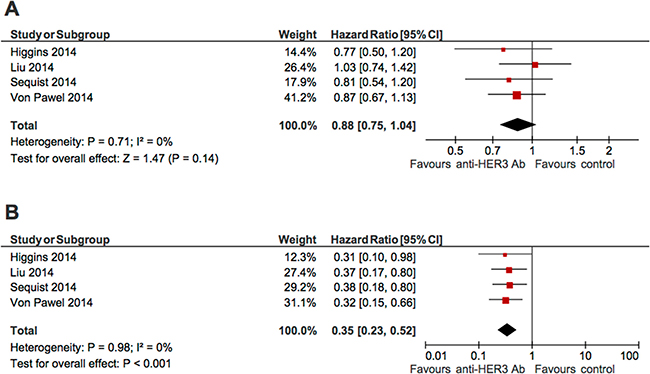 Figure 4: Forest plots showing effect of anti-HER3 antibodies on progression-free survival among unselected patients (A), or patients with NRG expression (B).

Anti-HER3 antibodies were associated with significantly increased odds of diarrhea, nausea and vomiting, and rash as shown in Table 3.

Finally, we analyzed the different approaches used to evaluate the expression of NRG in solid tumors. In our retrospective analyses we observed that in the majority of studies the methods used were immunohistochemical assessment or polymerase chain reaction (PCR). Of note in those clinical studies in which the expression of NRG was used as a biomarker to select responsive patients, NRG was evaluated exclusively using mRNA by PCR (Table 2).

In the present article we describe the prognostic role of NRG expression, and the predictive accuracy of NRG expression as a biomarker of benefit from anti-HER3 therapies. With respect to the first aspect, no clear association was found between NRG expression and clinical outcome when analyzing all the studies globally. However, patients with tumors that expressed high levels of NRG had significantly delayed progression of the disease when treated with anti-HER3 antibodies, compared with those without such expression.

Through binding to ErbB/HER receptors, particularly HER3, the NRGs control several biological responses linked to the malignant phenotype, including proliferation or metastatic dissemination [15, 45]. In this context, it was expected that tumors with high expression of this ligand were associated with poor outcome. In fact, for some tumor subtypes such as breast cancer, expression of specific isoforms of NRG have been linked with worse outcome [46]. However, when analyzing the overall relevance of NRG expression in several tumor types, this hypothesis was not verified suggesting that the role of NRG in cancer probably depends on other biological characteristics including tumor subtype. Moreover, since the actions of NRGs depend on the presence of their cognate receptors, the mere expression of NRGs may not be biologically fruitful unless expression of those receptors is present in the tumoral tissue. In fact, the link among patient outcome and expression of HER3 points in that direction. It is therefore likely that tumors expressing such receptor may be fed by NRGs produced by either the tumoral cells or their microenvironment. This biological situation may therefore be highly sensitive to agents, such as anti-HER3 antibodies, that disrupt the NRG-HER3 interaction and signaling axis. In line with this hypothesis is the fact that activation of HER3 by NRG in cellular models predicts response to anti-HER3 therapies or antibodies against HER2 [10, 17, 45]. This situation represented the basis for the selection of NRG as a biomarker of response to anti-HER3 strategies. Our pooled analyses validate results from individual studies, confirming its potential use as a biomarker of benefit from therapies using anti-HER3 antibodies.

Use of NRG as a biomarker for the selection of patients that may benefit from therapies based on anti-HER3 antibodies requires the development of a reliable test to measure NRG expression in tumoral samples. While in all ongoing studies testing anti-HER3 antibodies NRG has been evaluated by PCR, in the retrospective series this ligand was also studied using immunohistochemistry. A limitation of this approach is the existence of different isoforms of NRG, so it is mandatory to establish the isoforms present in the samples to be analyzed using clinically-friendly methods for their identification and measurement. Finally, the optimal cut-offs for defining positive expression in different tumors also require standardization.

This study has limitations. It is a study based on published data, so it could have a potential bias for the identification of only positive published studies. Secondly, as mentioned, the methods for identification of NRG expression were variable with some studies using antibodies and others selecting patients based on the expression of NRG mRNA by PCR. Finally the combination of different tumour types adds heterogeneity which may mask a true effect in a specific tumour type. This is a major limitation of the actual study. It will be desirable to reevaluate the relevance of NRG expression in the different tumors when more studies will be available.

In conclusion, this study suggests that assessment of NRG expression, despite showing no significant prognostic association with OS or PFS, is a predictor of benefit from anti-HER3 antibodies.

Preferred Reporting Items for Systematic Reviews and Meta-Analyses guidelines was used to guide this analyses [47].

Medline (Host: PubMed) was searched for studies published between September 1995 and October 2015, which evaluated the expression of neuregulin/heregulin in solid tumors by immunohistochemistry (IHC) or quantitative real-time RT-PCR. Studies using other assays were excluded to maintain homogeneity. We used the MeSHterms “neuregulin” or “heregulin” and “cancer”, adding the limitation of publications in English. Additional studies were identified through citation lists.

Two independent searches were conducted. First, we explored the association of NRG with clinical outcome. Eligible studies reported hazard ratios (HR) and 95% confidence interval (CI) and/or p-value for overall survival (OS) from multivariable analyses; or provided Kaplan-Meier curves for OS at 3 and 5 years based on the expression of NRG. Studies reporting outcome of patients who had received a targeted agent directed against HER2 were excluded as well as studies not reported as a final publication. Data for OS were preferred but if not available, studies reporting data on intermediate endpoints such as progression-free survival (PFS) or time to relapse were included and analyzed separately. For the purpose of this analysis, PFS and time to relapse were considered to be interchangeable. Second, we explored if the expression of NRG was a predictor of benefit of treatment with anti-HER3 antibodies. Eligible studies reported HR and 95% CI and/or p-value for PFS from multivariable analyses in placebo-controlled randomized trials of anti-HER3 agents. In this cohort of studies we also explored toxicities of anti-HER3 therapies.

Two reviewers (LD, AO) evaluated independently all the titles identified by the search strategy. The results were then pooled and all potentially relevant publications retrieved in full and assessed for eligibility. Disagreement was resolved by consensus.

The following information was captured using data abstraction forms: Name of first author, year of publication, type of tumor, NRG studied, methods used for the evaluation of NRG, proportion of patients with NRG expression and the number of patients treated with anti-HER3 therapies. Survival data were estimated from multivariable analyses independently by two authors (EA, LD) and disagreement was resolved by consensus.

If HRs were not reported we extracted the odds of survival at three and five years from Kaplan-Meier curves and calculated odds ratios (OR) with 95% CI. For studies reporting both HR and Kaplan-Meier curves, we preferentially used the multivariable HR. Finally, we extracted data of the most commonly reported toxicities and calculated OR with 95% CI for these toxicities, comparing anti-HER3 therapies to placebo.

Study characteristics were reported descriptively using means and proportions. Studies reporting HR for OS or PFS were weighted and pooled using the generic inverse variance and random-effect model [48]. Studies reporting the odds of death or progression at 3 or 5 years or the odds of commonly reported toxicities were weighted and pooled using the Mantel-Haenszel random-effect model. All meta-analyses were conducted using RevMan 5.3 analysis software (Cochrane Collaboration, Copenhagen, Denmark).

Statistical heterogeneity was assessed using the Cochran’s Q and I2 statistics. Subgroup analyses were conducted as described by Deeks et al. [49]. All statistical tests were two-sided, and statistical significance was defined as p < 0.05. No corrections were made for multiple testing.

45. Yuste L, Montero JC, Esparis-Ogando A, Pandiella A. Activation of ErbB2 by overexpression or by transmembrane neuregulin results in differential signaling and sensitivity to herceptin. Cancer Res. 2005; 65:6801–6810.