There is as yet no consensus as to the best choice among the three treatment options (maintenance, complete chemotherapy-free intervals [CFIs], and continuous) for metastatic colorectal cancer (CRC). We performed a meta-analysis of six trials (N = 2, 454 patients) to compare the safety and efficacy of those three treatment strategies. Maintenance appeared to offer an advantage over CFI with respect to progression-free survival (PFS) (hazard ratio [HR]: 0.53, 95% confidence interval [CI], 0.40–0.69). PFS and overall survival (OS) were comparable between the maintenance and continuous strategies (HR: 1.18, 95% CI, 0.96–1.46; HR: 1.05, 95% CI, 0.98–1.27, respectively), as was OS between the maintenance and CFI strategies (HR: 0.84; 95% CI, 0.70–1.00). The incidence of grade 3/4 toxicity, including neutropenia, neuropathy, hand-foot syndrome and fatigue, was lower with maintenance than with continuous therapy. A maintenance regimen utilizing bevacizumab-based doublets appeared to confer a slight advantage over bevacizumab monotherapy with respect to PFS (P = 0.011). Maintenance appeared to reduce cumulative grade 3/4 toxicity as compared to the continuous strategy, while showing comparable efficacy. Bevacizumab-based doublets appeared to be of particular value in patients with metastatic CRC.

Colorectal cancer (CRC) is a common malignancy that accounts for approximately 1.2 million new cases and 600,000 deaths worldwide every year [1]. Approximately 40–50% of CRC patients develop metastatic disease. While surgery is the cornerstone treatment for early-stage CRC (stage I–III), chemotherapy is often the first resort in patients with metastatic disease (stage IV), when the lesions are often not fully resectable. During the past few decades, the treatment of metastatic (m)CRC has undergone significant advances, resulting in improved outcomes and prolonged survival [2]. The introduction of newer drugs such as irinotecan (CPT-11) and oxaliplatin (OHP), and biological agents such as bevacizumab (Bev) and cetuximab (Cet), has increased the response rates up to 50–60% alongside increased median progression-free survival (PFS) and overall survival (OS) (9 to 11 months and up to 30 months, respectively) [3–5].

Despite this significant progress, however, the optimal duration of treatment remains a controversial issue. For patients benefiting from standard induction chemotherapy, continuous long-term chemotherapy is inevitably associated with side effects and carries a risk of development of drug resistance. On the other hand, intermittent treatment is likely to adversely impact the chemotherapeutic efficacy and treatment outcomes. Amelioration of treatment toxicity and determination of the optimal treatment duration are thus active areas of cancer research. One of the strategies to reduce side effects is the stop-and-go strategy, which involves stopping all agents after a predefined number of cycles (3–6 months) (complete chemotherapy-free interval [CFI]) and restarting on progression. However, studies do not support CFI due to significantly reduced response rates, suggesting complete CFI may not be an optimal option for patients with mCRC [6, 7]. This issue and the status and prospects of maintenance therapies in mCRC were focuses of deliberation at the European Society for Medical Oncology, 2014. During that meeting, Professor Dirk Arnold proposed a maintenance strategy akin to that usually considered for the treatment of lung cancer.

The concept of maintenance treatment envisages a period of high-intensity chemotherapy, after which those agents that are mainly responsible for cumulative toxicity are stopped. A comparative assessment of the maintenance, complete CFI and continuous strategies may help identify the optimal chemotherapeutic regimen for sequential treatment of mCRC.

A total of 1,096 articles were retrieved on initial search query. Of these, 1084 studies were excluded after a review of the study titles and abstracts. After a full-text review of 11 potentially eligible articles, six studies [8–13] with a combined study population of 2454 patients with mCRC were included in the meta-analysis (Figure 1). None of the patients had a history of treatment for metastatic disease. The baseline characteristics of the six trials are summarized in Table 1. Note that the study by Hegewisch et al. [10] had three treatment arms and that armA vs. armC and armB vs. armC were treated as two separate trials. In addition to the six articles included in the meta-analysis, data from five other trials of maintenance therapies were included in the pooled analysis [14–18]. The baseline characteristics of the five trials included in the pooled analysis are summarized in Table 2. PFS was defined as the time from maintenance randomization to progression or death (not including induction therapy time). To standardize the data, PFS values from several studies [8, 9, 12, 15, 18] were adjusted from maintenance treatment to progression or death to first disease progression or death. 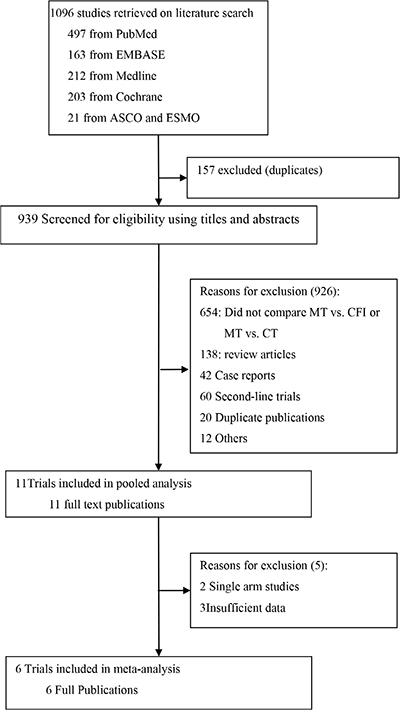 2From randomization to disease progression or death (not including induction time).

3PFS, or, if induction therapy was reintroduced, addition of the initial PFS and the PFS of the reintroduction.

Table 2: Characteristics of other relevant studies included in the pooled-analysis

Three trials [9, 12, 13] (N = 1,223) were retained for the maintenance vs. continuous treatment groups. Three trials reported PFS, though data on OS were available only from two trials [9, 12] (Note: the 95% confidence intervals [CI] for OS reported by Yalcin et al. were calculated using the imputation method [19]). The three trials were superiority trials. 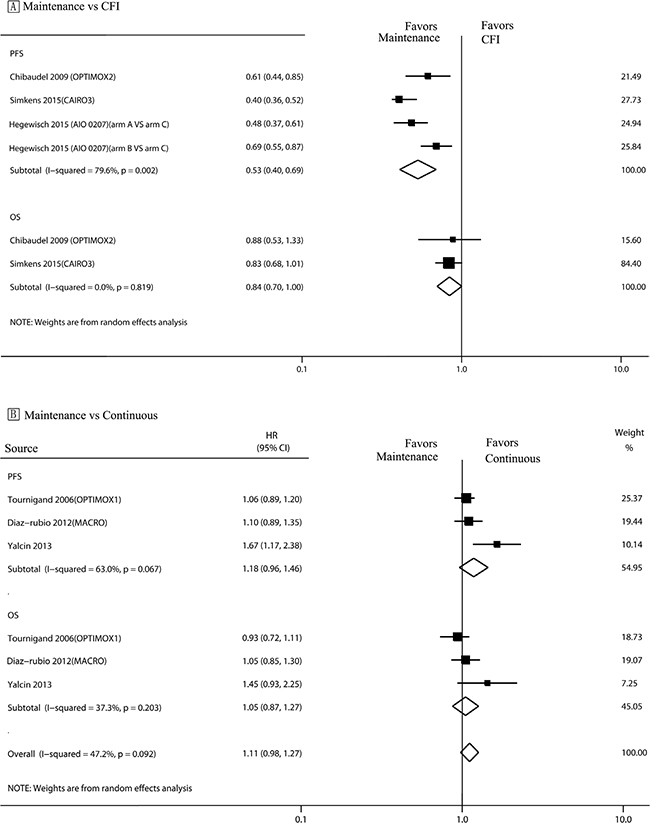 Figure 2: PFS and OS in trials comparing maintenance strategies with CFIs/continuous treatment strategies. The size of each data marker correlates with the weighting factor (1/SE2) assigned to the study. For the combined results, the length of the diamond represents the 95% confidence interval of the summary. PFS, Progression free survival; OS, overall survival; HR, hazard ratio; CFI, complete chemotherapy-free interval. 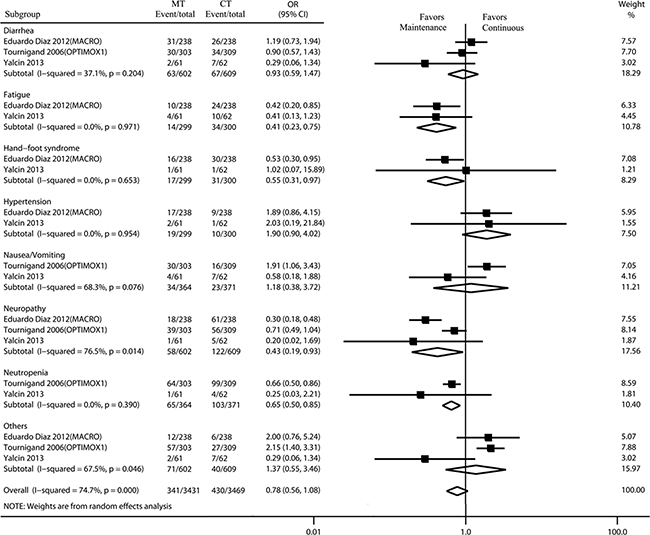 Pooled analysis of PFS and OS 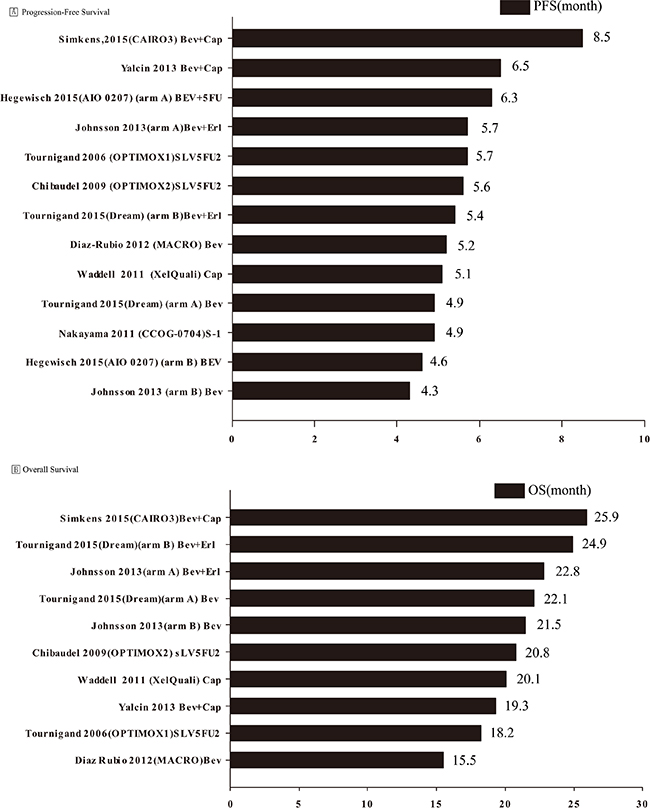 Compared to the complete CFI treatment strategy, the maintenance strategy had a significant impact on PFS. Moreover, no significant difference was observed between the maintenance and continuous therapies with respect to PFS and OS. However, the incidence of grade 3/4 adverse events tended to be higher with the continuous treatment strategy. In a pooled analysis of data on maintenance treatment, the bevacizumab-based doublets regimen was slightly superior to bevacizumab monotherapy with respect to PFS.

Two systematic reviews have compared the intermittent and continuous chemotherapeutic strategies for mCRC patients [20, 21]. However, the complete CFI and maintenance strategies have basic differences from those approaches. The results of the two OPTIMOX trials [8, 12] indicate that complete CFI is not appropriate, and that non-progressive patients should receive some form of maintenance therapy [22]. The results of our analysis of PFS revealed a statistically significant benefit associated with maintenance over CFI therapy. Furthermore, the data on PFS and the incidence of grade 3/4 adverse events were not factored into the pooled analysis, which precluded assessment of the effect on the patients’ quality of life. Consequently, the scope of those reviews does not allow for comprehensive comparison of maintenance and continuous treatment strategies.

The pooled analysis of PFS demonstrated that maintenance therapy with bevacizumab-based doublets significantly prolonged the time to progression over that associated with bevacizumab monotherapy. There was no significant difference between the two maintenance groups with respect to OS. In the present study, the delay in disease progression did not translate into a statistically significant OS benefit. This may reflect the subsequent strategies as well as the variability in individual characteristics. Following such a strategy, patients unwilling to continue treatment can opt out. However, we believe that most patients are likely to benefit from an active maintenance strategy.

Some notable limitations of our study are worth mentioning. Our meta-analysis was not based on individual patient data. Further, the variability in baseline patient characteristics could not be controlled for. The definition of PFS in some trials was different from the one employed for this meta-analysis. This necessitated adjusting the data according to the study design, which may have been affected by subjective bias.

In conclusion, the efficacy of a maintenance treatment strategy with first-line systemic therapies appears to be comparable to that of continuous treatment. The benefits of a maintenance strategy included reduced incidence of cumulative grade 3/4 toxicity, particularly neutropenia, neuropathy, and hand-foot syndrome. In comparison, maintenance bevacizumab monotherapy appeared to prolong the time to progression.

Potentially relevant studies from inception to March 2015 were identified through a structured literature search by two authors independently using Medline, Pubmed (pubmed is a search motor using Medline), EMBASE, Cochrane databases and the meeting abstracts of ASCO and ESMO. The key words employed for the literature search were advanced, metastatic, colorectal cancer, colorectal neoplasms, colorectal tumor, maintenance chemotherapy/strategies/strategy/therapy, stop-and-go, intermittent chemotherapy/strategies/strategy/therapy, continuous chemotherapy/strategies/strategy/therapy and clinical trial. The online abstracts of the retrieved studies were screened for eligibility. The reference lists from the retained articles were manually reviewed to identify any relevant studies missed in the original search. The abstract reports and virtual presentations at the American Society of Clinical Oncology annual meetings and European Society of Medical Oncology congresses from inception to 2014 were searched for relevant studies. Studies were evaluated using the Jadad scoring scale, and articles that scored ≥ 3 points were included in our study.

The eligibility criteria for inclusion of studies were: (1) phase II or III randomized controlled trials involving patients with CRC confirmed by histopathology; (2) studies comparing a maintenance with an intermittent chemotherapeutic strategy or those comparing a maintenance with a continuous chemotherapeutic strategy; (3) one or more of the primary or secondary outcomes were reported. Exclusion criteria were: (1) studies that had only a single treatment arm; (2) data on primary or secondary outcomes not available; or (3) only compared a continuous with an intermittent chemotherapeutic strategy. If more than one study evaluated the same data set, only the most recent publication was included in the meta-analysis. In cases where only the meeting abstract was available, and the article was as yet unpublished, data in the abstracts was supplemented by information from associated materials, including posters and presentation slides.

Data extraction was performed independently by two authors and entered in a standard data sheet. Data on the following variables were extracted: first author’s name, year of publication (acronym of the trial), journal, affiliated institution, country, study phase, format (full text or abstract), interventional and control treatments, hazard ratio (HR) with 95% confidence intervals (CIs) for PFS or OS, median PFS and OS, randomization method, analysis tool, number of patients randomized, demographic and clinical data (age, sex, ethnicity, histology), duration of follow up and toxicity (grade 3/4). Any disagreements were resolved by consensus, if necessary, after involvement of the third author when additional information was required, the corresponding authors were contacted via email.

All statistical analyses were performed using Stata version 11.2 SE (Stata Corp., College Station, TX, USA) and in compliance to the recommendations of the Cochrane Collaboration). As the outcome proportions were expected to be high, a random effects model was employed to estimate the HR from the pooled data. Meta-analyses were performed for OS and PFS to explore the robustness of the findings across the maintenance and continuous/complete CFI strategies. Two-sided P < 0.05 was considered statistically significant. A HR < 1.0 indicated a lower probability of attaining an event in patients receiving maintenance chemotherapy. We used the X2 test and the I2 measure for heterogeneity. A probability level for the X2 statistic < 10% (P ≤ 0.10) and/or I2 > 50% were considered indicative of statistically significant heterogeneity amongst the included trials. In addition, sensitivity analysis was performed to rule out any undue influence of larger studies on the observed associations. This was done by analyzing the results after sequential exclusion of individual larger studies from the meta- analysis.

Finally, we summarized the outcomes of 11 trials through a descriptive statistical analysis. Microsoft Excel was used to generate the graphs (histograms) with horizontal bars for PFS and OS. One-way ANOVA was performed to compare PFS and OS among groups of bevacizumab-based doublets, bevacizumab monotherapy and without bevacizumab.

The authors declare there is no conflicts of interest.