2Department of Laboratory Medicine and Pathobiology, University of Toronto, Toronto, ON, Canada

5Department of Medical Biophysics, University of Toronto, Toronto, ON Canada

6Department of Pharmacology & Toxicology, University of Toronto, Toronto, ON Canada

Recent evidence demonstrated CIN4 as a predictive marker of anthracycline benefit in early breast cancer. An analysis of the NCIC CTG MA.21 clinical trial was performed to test the role of existing CIN gene expression signatures as prognostic and predictive markers in the context of taxane based chemotherapy.

RNA was extracted from patients in cyclophosphamide, epirubicin and fluorouracil (CEF) and epirubicin, cyclophosphamide and paclitaxel (EC/T) arms of the NCIC CTG MA.21 trial and analysed using NanoString technology.

In conclusion we have demonstrated CIN25 and CIN70 as prognostic markers in breast cancer and that CIN4 is a potential predictive maker of benefit from taxane treatment.

Taxanes and anthracyclines are widely used for the treatment of breast cancer yet highly toxic to patients [1–4]. At present there is no biological marker or assay available to identify which subset of patients will benefit from chemotherapy although numerous molecules have been investigated with limited success [4–12]. Research from our group [8] linked the predictive effect of CEP17 in vivo to chromosome instability (CIN), which itself is predictive of anthracycline benefit in the BR9601 trial [8]. We recently derived a four gene signature that was predictive of anthracycline benefit and demonstrated that patients with low tumour CIN4 scores benefited from anthracycline treatment significantly more than those with high CIN4 scores (HR 0.37, 95% CI 0.20-0.56, p=0.001) [13]. Given that most patients now receive taxane based chemotherapy we sought to extend the validation of this marker into trials including taxanes.

Our present study, we evaluated the predictive effect of the CIN signatures in patients in the NCIC CTG MA.21 trial and hypothesized that CIN signatures are associated with clinical outcome and resistance to taxane therapy.

Table 1 shows the baseline characteristics of the MA.21 CIN study population, whereas Figure 1 illustrates the total number of cases available for analysis; 342 RNA samples from CEF arm and 336 RNA samples from the ECT arm were successfully analysed on the NanoString platform. High CIN4, CIN25 and CIN70 scores were defined as above the median and were previously described [15–13].

Table 1: Baseline patient and tumour characteristics from the MA.21 study 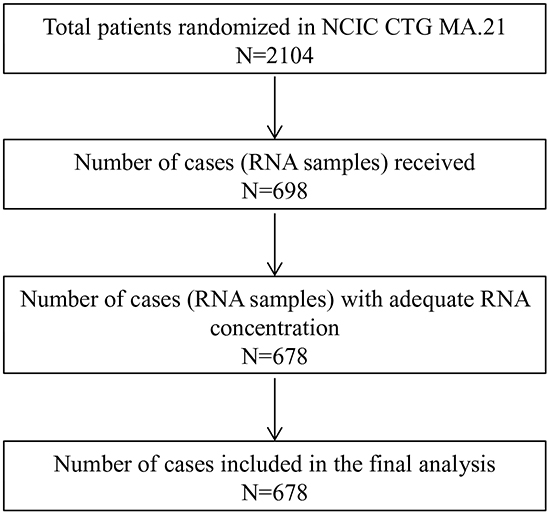 Correlation of CIN signatures and clinicopathological parameters with clinical outcomes

CIN signatures as a prognostic marker for RFS

CIN is associated with poor prognosis in patients with solid tumours [16–15]. We have previously shown that CIN is associated with sensitivity to anthracycline treatments [8–13] while others have demonstrated that CIN is associated with taxane resistance [17]. Since modern chemotherapy treatment of breast cancer includes the addition of a taxane, we examined the role of three CIN gene signatures in the NCIC CTG MA.21 breast cancer trial that compares taxane versus no-taxane containing arms. Our study has demonstrated that patients with low expression of the CIN4 gene signature exhibited greater benefit from the EC/T treatment regimen versus the CEF regimen. This is in contradiction to previous work in ovarian cancer suggesting a CIN70 gene expression signature was predictive of resistance to taxanes and sensitivity to carboplatin treatment [17]. However, it is unclear if our current result reflects the addition of a taxane to the treatment regimen or simply extending the duration of the chemotherapy regimen. Both arms included a cumulative dose of 720mg/m2 of epirubicin however; the EC/T arm had an additional four cycles of paclitaxel [14]. Therefore, our result could reflect either the addition of paclitaxel or the need for extended chemotherapy. However, there is accumulating evidence to support the former. For example, the UK TACT study investigated whether sequential docetaxel after anthracycline chemotherapy would improve patient outcome compared to standard chemotherapy of a similar duration. This study demonstrated no difference in disease free survival between the FEC-D group and the control group (HR 0.95, 95% CI 0.85-1.08, p=0.44) [18]. Meta-analyses performed by the EBCTCG group demonstrated the incorporation of taxanes into an anthracycline regimen resulted in the reduction of the risk of recurrence and survival at 8 years [19]. This analysis recognised there was variation in trial designs when comparing the effects of additional cycles of just a taxane to a constant background chemotherapy regimen. However, in the taxane trials with different number of cycles the 8-years breast cancer mortality was 21.1% for the taxane groups versus 23.9% for the control groups. In contrast in trials examining the effects of a taxane regimen with the same number of cycles non-taxane chemotherapy demonstrated the 5-year a small but significant reduction in breast cancer mortality [19]. These results would indicate that the addition of a taxane to the chemotherapy regimen improves survival and the CIN4 is predictive of taxane benefit.

In agreement with other studies, we have demonstrated that the CIN25 and CIN70 signature is an independent prognostic biomarker in breast cancer [15–20]. We performed our analysis on the NanoString platform, which has been shown to be a robust and reproducible platform that can easily be incorporated into the pathology laboratory setting [21]. The identification of methods that predict breast cancer clinical outcome is being studied in numerous labs around the world. There are a number of prognostic expression arrays available such as Oncotype DX [22], Mammaprint [23] and Prosigna [21] that predict patient outcome in estrogen receptor (ER) positive patients; however, none of them are tailored towards the ER negative population. The CIN25 and CIN70 gene expression signatures were derived irrespective of ER status and contain genes, such as TPX2, TOP2A, MAD2L1, CCNB1, CDC20 and PTTG1 that are involved in spindle assembly checkpoint (SAC) as well as DNA damage checkpoint genes [15]. Therefore, the CIN25 and CIN70 signatures are credible candidates for use in the prognostic setting.

Ultimately, although there are a number of prognostic markers available, but there are no predictive signatures associated with specific chemotherapies to level I evidence. We had previously demonstrated the CIN4 signature to be predictive of anthracycline benefit [13], in this study we demonstrate that CIN4 has potential to be predictive for benefit from the addition of a taxane to chemotherapy treatment.

The MA.21 (ClinicalTrials.gov (NCT00014222)) trial recruited 2104 pre- and post-menopausal women with histologically confirmed node positive or high risk node negative adenocarcinoma of the breast treated with either total or partial mastectomy. Patients were randomised to one of three regimens to receive: 1) 6 cycles of CEF (epirubicin (60mg/m2) and fluorouracil (500mg/m2) given intravenously on days 1 and 8 and oral cyclophosphamide (75mg/m2) on days 1-14) every 28 days, 2) 6 cycles of EC/T (epirubicin (120mg/m2) and cyclophosphamide (830mg/m2) on day 1 and filgrastim (G-CSF) subcutaneously (SC) on days 2-13 followed by 4 cycles of paclitaxel (175mg/m2)) every 21 days, 3) 4 cycles of AC/T (doxorubicin (60mg/m2) and cyclophosphamide (600mg/m2) on day 1 every 21 days followed by 4 cycles of paclitaxel (175mg/m2)) every 21 days. Treatment in all arms continued in the absence of disease progression or unacceptable toxicity; patient characteristics are shown in Table 1. The primary end point for the MA.21 trial was relapse-free survival (RFS) defined as the time from randomization to the time of recurrence of the primary disease. The protocol was approved by central and local ethics committees, and each patient provided written informed consent prior to randomization. For the current analysis, tissue blocks were retrieved for RNA extraction.

RNA (200ng) was used with the nCounter system, according to the manufacturer’s protocol (NanoString ® Technologies, Seattle, WA, USA). In brief, 5µl of RNA was hybridized at 96°C overnight with the NanoString Codeset. Probes for the analysis were synthesized by NanoString technologies and included probes for the 93 genes of interest and 6 normalising genes (Supplementary Table S1); all 99 genes were assayed simultaneously in multiplexed reactions. After probe hybridizations and NanoString nCounter digital reading, counts for each RNA species analyzed. The nCounter CodeSet contains two types of built-in controls: positive controls (spiked RNA at various concentrations to assess the overall assay performance) and negative controls (probes for background calculation). Raw mRNA abundance count data were pre-processed using the NanoStringNorm R package (v1.1.19) using normalization factors derived from the geometric mean of housekeeping genes, mean of negative controls and geometric mean of positive controls [24]. The CIN4/25/70 scores were developed and analysed as described in [13].

The SAS (SAS Institute Inc., Cary, NC, USA, version 9.2) statistical package was used for statistical analysis. Kaplan-Meier curves of survival were used for estimation of relapse free survival (RFS), whereas log-rank test was used to compare RFS among different groups of patients. The Cox proportional hazards model was used to estimate hazard ratios for relapse. When comparing outcomes between the treatment arms within the groups of patients identified by biomarker expression, p-values were not calculated for sub-groups to avoid multiple testing and bias where one group was much smaller than the other. The Cox model was instead used to identify statistically significant interactions (p<0.05) between biomarkers and outcome on the different treatments (treatment by marker interaction), in models that also included biomarker status (marker effect) and treatment, as covariates. In exploratory analyses a value of p<0.05 was considered statistically significant as the Bonferroni correction was not applied.

This work was supported by the funding from OICR. We thank the government of Ontario for funding, which is provided through the Ontario Ministry of Research and Innovation.

All authors state that they have no financial conflicts of interest.