Recent reports show that long non-coding RNAs (lncRNAs) are emerging as significant functional regulators in the development of tumors, including bladder cancer. Here, we found that CCAT2 was upregulated in bladder cancer tissues and cell lines. Through the statistical analyses, we also found that the high expression level of CCAT2 was positively correlated with histological grade and TNM stage of bladder cancer. Further experimental results revealed that knockdown of CCAT2 could decrease cell proliferation and migration as well as induce apoptosis in bladder cancer cells. Besides, using the post-transcriptional device of synthetic biology, we create the tetracycline-inducible double small hairpin RNAs (shRNAs) vector to control the expression level of CCAT2 which was induced by doxycycline in a dosage-dependent manner. In summary, our data indicated that CCAT2 may be an oncogene and a therapeutic target in bladder cancer. The expression of CCAT2 can be quantitatively controlled by the synthetic “tetracycline-on” switch system in bladder cancer in response to different concentrations of doxycycline to inhibit the development of bladder cancer cells.

Bladder cancer is one of the major common causes of global cancer mortality all over the world [1, 2]. Radiation therapy, chemotherapy and surgery are current important treatments for bladder cancer. However, the patients’ 5 year survival rate is still low [3, 4]. Lacking of integrated understanding of development of bladder cancer is one of the crucial reasons. Recent studies show that some dysregulated long non-coding RNAs (lncRNAs) such as GHET1, HOTAIR, MDC1-AS may be used as therapeutic targets for patients diagnosed with bladder cancer [5–7]. It indicates that lncRNAs may act as novel indicators to cure bladder cancer.

Long non-coding RNAs (lncRNAs) participate in the development of many human diseases including cancer [8–11]. Long non-coding RNA, CCAT2, is overexpressed and promotes progression of colorectal cancer [12]. CCAT2 activates proliferation of breast tumor by regulating the Wnt signaling pathway [13]. In esophageal squamous cell carcinoma, CCAT2 is overexpressed and may be a diagnostic biomarker [14]. However, the role of CCAT2 in the development of bladder cancer is unclear and is needed to be studied.

CCAT2 was upregulated in bladder cancer tissues and cell lines 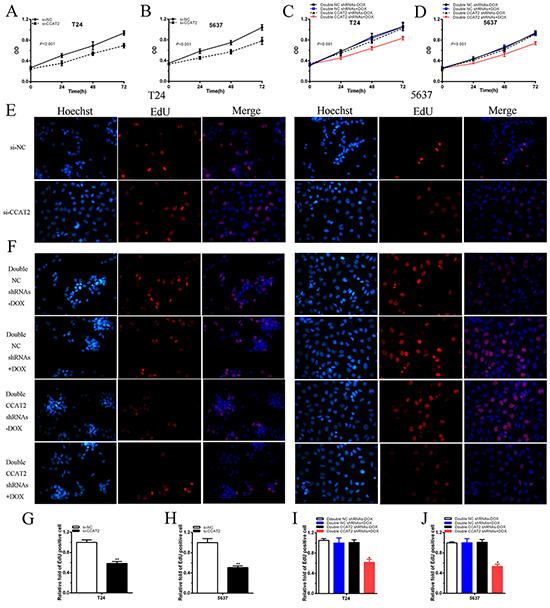 Then EdU assay was carried out to further detect function of CCAT2 in promoting cell proliferation. As shown in Figure 2E, compared with si-NC group, the rate of EdU positive T24 or 5637 cells were significantly decreased in si-CCAT2 group. As shown in Figure 2F, less EdU positive T24 or 5637 cells were observed in group transfected with 2 ug/ml tetracycline-inducible CCAT2 shRNA.

The quantitative results proved that the number of EdU positive cells in si-CCAT2 group was significantly reduced in T24 (P < 0.01) and 5637 (P < 0.01) (Figure 2G and 2H). The quantitative results also suggested that, compared with the negative control group, the rate of EdU positive cells in group transfected with 2 ug/ml tetracycline-inducible CCAT2 shRNA was significantly decreased in T24 (P < 0.01) and 5637 (P < 0.01) (Figures 2I and 2J).

These data indicated that CCAT2 may promote cell proliferation in bladder cancer. 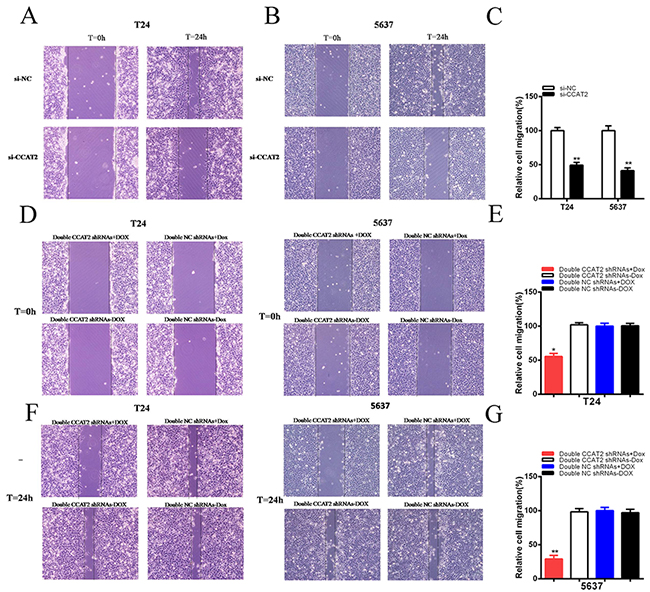 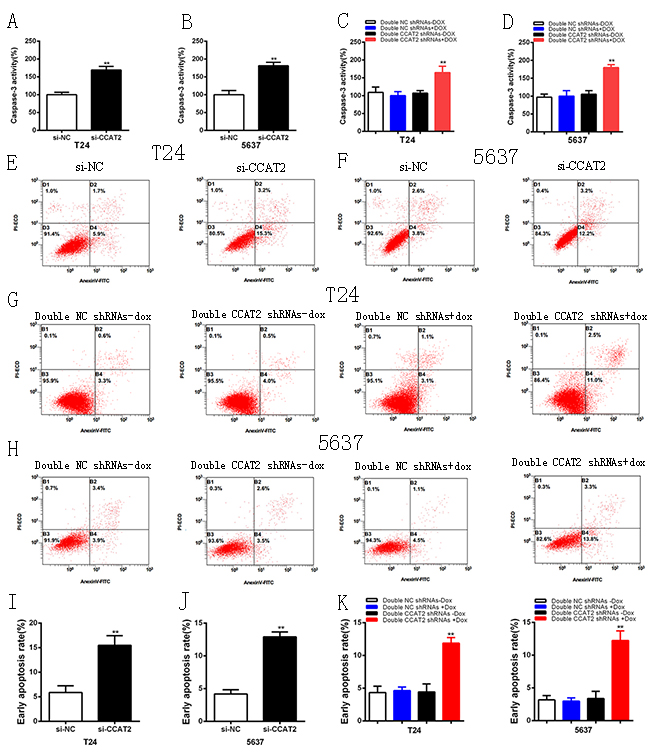 Previous studies show that lncRNAs participate in gene regulation and promote our understanding of the mechanism of disease development, including cancers [20, 21]. CCAT2 is located in chromosome 8q24 [12]. CCAT2 is overexpressed and increases cell proliferation through the Wnt signaling [13, 22]. In gastric cancer, CCAT2 was upregulated and used as a potential indicator of prognosis [23]. Besides, CCAT2 promotes invasion of non-small cell lung cancer [24]. However, the relationship between CCAT2 and bladder cancer is unclear.

Synthetic biology is now emerging as a novel field in gene therapy. Through the biological devices, such as transcriptional switches, post-transcriptional switches, promoters and logic gates, complex synthetic gene networks and genetic circuits were conducted to mediate signal transduction, genome editing and chromatin modification [15–17]. These devices are employed in the emerging era of medical synthetic biology. What’s more, recent studies show that we can use medical synthetic biology to treat bladder cancer. Through the CRISPR-Cas9 system, a new device of synthetic biology, Liu et al [25] constructed modular AND gate circuits to inhibit bladder cancer cell growth. Tetracycline-inducible system, another important biological component, was widely used in gene regulation. Our group has employed the tetracycline-inducible system to control the expression of PVT1 [26]. In addition, the Tetracycline-inducible system can effectively regulate the tet-inducible artificial microRNAs to silence the oncogene in bladder cancer [27].

In this study, we reported the construction of tet-inducible system of CCAT2 and detected its anti-cancer effects in bladder cancer. Our data showed that the tet-inducible system could control two identical shRNAs targeting CCAT2 in a dosage-dependent manner and effectively inhibited the development of bladder cancer cells. These observations also suggested that the anticancer efficiency could be further increased if more different shRNAs and more cancer-related genes were controlled.

In conclusion, CCAT2 promotes progression of bladder cancer cells. Furthermore, we use the one of the synthetic devices, tetracycline-inducible switch, to control the expression of shRNA targeting CCAT2, thus providing a novel method in medical synthetic biology. Utilization of this synthetic biology device to construct tet-inducible shRNA is a simple and cheap approach which has presented a good prospect to treat cancer. Future therapeutic schemes about gene therapy and medical synthetic biology can take this research into consideration. At last, CCAT2 may become a novel molecular target for bladder cancer treatment and this device may be widely used in the cancer therapy in the future.

SV-HUC-1 cells and human bladder cancer cells (T24, 5637) were purchased from the Institute of Cell Research, Chinese Academic of Sciences, Shanghai, China. The SV-HUC-1 cells were cultured in F12K medium (Invirtogen, Carlsbad, CA, USA) plus 1% antibiotics (100U/ml penicillin and100 μg/ml streptomycin sulfates) and 10% fetal bovine serum (FBS) at 37°C with an atmosphere of 5% CO2 in incubator. T24 and 5637 were cultured as suggested by American Type Culture Collection (ATCC, Manassas, VA).

In this research, 48 patients diagnosed with bladder cancer were included. Matched para-cancer tissues and bladder cancer tissues were cut and then snap-frozen in liquid nitrogen immediately. Written formal approval was also gotten from all the patients. This research was approved by the Institutional Review Board of Shenzhen Second People’s Hospital.

Total RNAs from tissues or cells after transfection were extracted using the TRIzol reagent (Invitrogen, Grand Island, NY, USA) according to the manufacturer’s instructions. PrimeScript RT Reagent Kit with gDNA Eraser (Takara, Japan) was used to transform RNA to cDNA. The mRNA expression levels of CCAT2 were measured by using SYBR® Premix Ex TaqTM (TaKaRa, Japan) according to the user’s manuals on the Roche lightcycler 480 Real-Time PCR System. GAPDH was utilized as the control to normalize the data. The primer sequences were shown: CCAT2 primers [22] forward: 5’-CCCTGGTCAAATTGCTTAACCT-3’, reverse: 5’-TTATTCGTCCCTCTGTTTTATGGAT-3’; GAPDH primers forward: 5’-CGCTCTCTGCTCCTCCTGTTC-3’, reverse: 5’-ATCCGTTGACTCCGACCTTCAC-3’. The comparative ΔCt method was used to analyze the results by calculating the relative amount of CCAT2. All experiments were carried out at least three repetitions.

Cell Counting Kit-8, CCK-8 (Beyotime Institute of Biotechnology, Shanghai, China) and 5-ethynyl-20-deoxyuridine (EdU) assay kit (Ribobio, Guangzhou, China), respectively, were used to measure cell proliferation according to the manufacturer’s instructions. 4×103 cells per well were seeded in a 96-well plate and pre-incubated for 24 hours, and then transiently transfected with siRNAs or plasmids. At 24, 48 or 72 h post-transfection, 10 μl CCK-8 was added to each well and cultured for 1 h. Absorbance at a wavelength of 450 nm was measured by an ELISA microplate reader (Bio-Rad, Hercules, CA, USA). EdU incorporation assay was carried out according to previous studies [26, 27]. The experiments were performed in triplicate.

Cell migration was measured by scratch assay. Cells were seeded in 6-well plates and cultured for 24 hours before transfection. The cells were transfected with specific siRNA oligonucleotides or vectors. Clear lines in the wells were generated using a sterile 200 μl pipette tip. A digital camera system was used to take pictures from each well quickly. 24 hours later, pictures were taken again. Migration distance was measured at the time of 0h and 24h. Each test was carried out at least three times.

ELISA assay and flow cytometry assay were used to detect cell apoptosis. Bladder cancer cells were transiently transfected with siRNAs or plasmids in 12-well plates. After 48 hours, the caspase 3 enzyme-linked immunosorbent assay (ELISA) assay kit (Hcusabio, Wuhan, China) was used to detect the activity of caspase 3 according to the manufacturer’s protocol. For flow cytometry assay, cells were cultivated in 6-well plates before transfection. 48 hours after transfection, cells were collected and washed with PBS. The annexin V-fluorescein isothiocyanate (FITC)/PI detection kit (Invitrogen, Carlsbad, CA, USA) was used to stain cells with Annexin V-FITC (AV, 5μl) and propidium iodide (PI, 3μl) according to the manufacturer’s manuals. Flow cytometry (EPICS, Xl-4, Beckman, CA, USA) was employed to detect the percentage of apoptotic cells. In the graphs, four quadrants were shown and cells were discriminated into dead cells (upper left), living cells (lower left), early apoptotic cells (lower right) and late apoptotic cells (upper right). The ratio of early apoptotic cells was regarded as an observation index to compare the experimental group and negative control group. All experiments were repeated at least three times.