Background: We investigated the epidemiologic characteristics and prognostic significance of PIK3CA mutations/amplifications in curative resected liposarcoma.

Patients and methods: A total of 125 liposarcoma tissue samples were collected over a 12-year period. PIK3CA mutations and gene copy number amplifications were analyzed by pyrosequencing and fluorescence in situ hybridization (FISH).

Soft tissue sarcoma (STS) is a heterogeneous disease with over 50 histologic subtypes, with various biological behaviors and genetic features [1]. In adults, liposarcoma is the most common type STS, representing 17–25% of the total cases [2]. Although surgical resection is the primary treatment for localized disease, many liposarcomas eventually progress to advanced disease that is either unresectable, metastatic, or both. For patients with those tumors, the mortality is high, and local and/or systemic tumor burden also results in significant morbidity [3].

The phosphatidylinositol-3-kinase (PI3K)-Akt-mTOR signaling pathway plays a central role in regulating tumor cell metabolism and survival [5]. Activation of the PI3K pathway occurs upon engagement with mutated or amplified phosphatidylinositol-4,5-bisphosphate 3-Kinase, catalytic subunit Alpha (PIK3CA) gene It increases p110α expression, PI3K activation, and phosphorylation of downstream signaling molecules. Akt-PIK3CA gene amplification was found in 10–30% of non-small cell lung cancer, breast cancer, and colon cancer [6–8]. Activating somatic mutations were also identified in various solid tumors [9, 10]. Recently, PIK3CA mutation was reported in 12% and 18% of myxoid/round-cell liposarcoma, and it was associated with Akt activation and poor clinical outcome [11, 12]. Despite accumulating evidence of biological role, there have been few studies reporting the frequency of PIK3CA aberration (including mutations and amplifications) for all liposarcoma subtypes.

In this study, we evaluated the frequency of PIK3CA amplification and mutation in surgically resected liposarcoma. Furthermore, we also determined the prognostic impact of PIK3CA genetic aberration for liposarcoma patients.

*PIK3CA amplification was defined as if one of the following criteria is fulfilled: (1) PIK3CA/CEN3 ratio is ≥ 2.0, (2) average number of PIK3CA signal per nucleus > 4.0

Of the 125 cases, 101 tumor samples were evaluable for PIK3CA FISH analysis. Based on PIK3CA gene expression values, tumors were categorized into three groups: (I) normal copy number, tumors with ≤2 copies per cell with a PIK3CA/CEN3 ratio < 2.0; (II) polysomy, tumors with an average PIK3CA signal per nucleus 4.0 ≥ to > 2.0; and (III) amplification, tumors with >4 copies per cell and/or a PIK3CA/CEN3 ratio ≥ 2.0. By these criteria, of the 101 cases, 14 tumors (13.9%) demonstrated copy number gain, 11 (10.9%) had polysomy, and 3 (3.0%) had gene amplification (Table 2, Figure 1). The median PIK3CA gene copy numbers were 2.3 (range, 2.1–2.6) and 6.5 (range, 5.0–10.3) in PIK3CA the polysomy and amplification groups, respectively. We also analyzed the association between PIK3CA amplification status and clinical parameters. PIK3CA copy number gain was significantly associated with older age and larger tumor size (Table 1, P=0.023 and P=0.040, respectively). There were no significant differences in PIK3CA copy number change with respect to sex, histology, and primary tumor site.

Figure 1: Representative fluorescent in situ hybridization of tumors with A. normal copy numbers, B. polysomy, C. and PIK3CA amplification.

Figure 2: Survival analysis based on PIK3CA status. A. The median disease-free survival (DFS) was 22.0 months in patients with PIK3CA copy number gain and 107.6 months in the normal group. B. The median overall survival (OS) was not significantly different between the two groups. 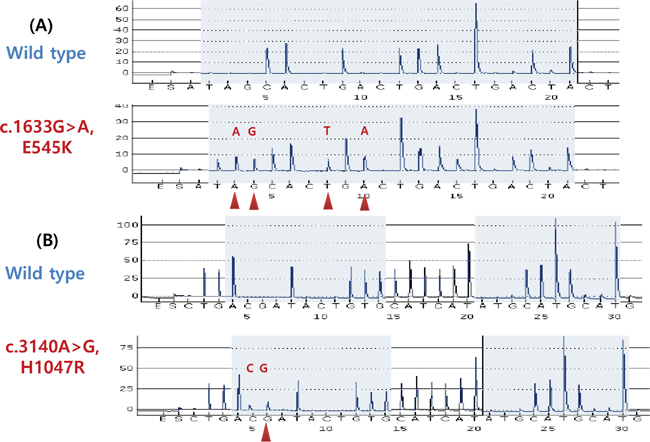 With respect to histologic subtype, PIK3CA mutations were more frequent in well-differentiated/dedifferentiated tumors compared with myxoid/round cell/pleomorphic tumors (Table 4, 13.3% vs. 2.2%, P=0.043). Of all mutated tumors, 6 tumors (66.7%) were myxoid/round cell, 2 tumors (22.2%) were pleomorphic, and 1 tumor (11.1%) was well-differentiated (Table 4, Supplementary Table 1). There were no statistically significant differences in PIK3CA mutation based on sex, age, tumor size, and primary tumor sites (Supplementary Table 1). We also performed analyses to examine the association between PIK3CA mutations and survival outcome. PIK3CA mutation was not associated with a significant difference in DFS or OS (data not shown, p=0.739 and p=0.376, respectively)

Accumulating evidence has suggested different outcomes for the major histologic subtypes of liposarcoma. Therefore, histologic classification is known as a most strong prognostic factor for survival [13–16]. Among the 5 subtypes of liposarcoma, well-differentiated and myxoid liposarcoma had the most favorable prognoses, while dedifferentiated, round cell, and pleomorphic liposarcomas often manifest with clinically aggressive behavior and distant metastasis. Overall, with use of conventional doxorubicin-based chemotherapy, median survival remains less than 12 months for patients with metastatic/unresectable tumors [17]. The limited improvement after conventional therapy treatment prompts us to explore the molecular biology and identify prognostic and druggable biomarkers.

To evaluate PIK3CA copy number gain, we used FISH. Previous studies defined PIK3CA/CEP3≥2 [22–24] as PIK3CA amplification, and some studies used PIK3CA>4 [18, 25]. In our large cohort study, we used a combination of these criteria and demonstrated that amplification and polysomy have significant prognostic impacts on liposarcoma patients. FISH is an easy and useful method by which one can visualize individual cancer cells in routine clinical practice. Our criteria need further validation in future clinical trials with targeted agents.

Mutations in the PIK3CA gene are mostly located within hotspots in exons 9 and 20 and lead to PI3K pathway activation [26]. Regarding the prognostic significance of PIK3CA mutation, previous reports yielded controversial results [6, 26–29]. PIK3CA mutation has been reported 14–18.3% of myxoid/round-cell liposarcoma and associated with shorter DFS with mass spectrometry-based genotyping [11, 12]. Here, we report PIK3CA mutations in 8.6% of liposarcoma by employing a pyrosequencing approach and not associated with prognostic outcome. Although the majority of mutant tumors (66.6%) were of the myxoid/round-cell subtype, additional mutant cases were also detected in well-differentiated, dedifferentiated, and pleomorphic liposarcoma. The limited sensitivity of sequencing method may result in low frequency or clinical outcome and further studies are warranted.

Despite first-line standard treatment with doxorubicin, median survival remains dismal. gemcitabine and docetaxel are frequently used as second-line treatment for STS [30]. While the total response rate for all patients is 16%, only 2 out of 20 liposarcoma patients had stable disease at 6 months. Pazopanib was another potential breakthrough as a salvage treatment for STS [31]. However, pazopanib showed favorable efficacy in patients with leiomyosarcoma and synovial sarcoma, but not in adipocytic sarcoma [32]. Similar outcomes were observed in our Asian STS patients who received pazopanib treatment [33]. Therefore, exploration of therapeutically tractable target based on molecular biology is strongly warranted. Recently, local amplification of the 12q13-15 regions, which contain copies of CDK4, was reported in well-differentiated liposarcoma [34]. However, because that subtype is relatively indolent and easily curable with surgical resection, CDK4 inhibitors are not necessary for treatment of well differentiated liposarcoma [16]. In our study, we found frequent aberrations of the PIK3CA gene mainly in the aggressive subtypes (round cell and pleomorphic), and it is worth considering as a therapeutic target.

PIK3CA amplification and/or mutation are associated with increased activity of the PI3K effector pAkt, suggesting that amplified or mutated tumors may be sensitive to PI3K inhibitors [22, 35]. In lung cancer cell lines, 37% of squamous cell harbored PIK3CA amplification and they were sensitive to PI3K inhibitor GDC-0941 with less than 1μmol/L of IC50 [35]. In a preclinical platform from Cancer Cell Line Encyclopedia, PIK3CA-amplified tumors were sensitive to BYL719, a PI3K α-selective inhibitor [36]. Cell lines with PIK3CA amplification was positively associated with BYL719 sensitivity (P=0.0037) and tumor-bearing mice with PIK3CA amplification responded to BYL719, leading to a response rate of -18% (lung cancer) and -80% (gastric cancer). Despite preliminary data, recent phase I trials have explored the potential predictive role of the PIK3CA gene. In a phase I trial with GDC-0941, a heavily treated ovarian cancer patient with PIK3CA amplification experienced disease stabilization for 4 months with significant pharmacodynamic changes [37]. While previous trials with PI3K inhibitors have been conducted in non-selected patients, recent clinical trials with PI3K inhibitors are ongoing for those with PIK3CA gene alterations (ClinicalTrials.gov number NCT01928459 and NCT01608022). As shown in our study, liposarcoma may be a promising potential candidate for use of PI3K inhibitors. Further study with preclinical model is warranted to validate the therapeutic role in sarcoma.

Here, we report PIK3CA aberration as an independent poor prognostic factor for curatively resected liposarcoma. Our findings also indicate that PIK3CA inhibitor is a promising therapeutic target for liposarcoma.

This study was conducted in a cohort of patients with liposarcoma who underwent curative resection at Severance Hospital, Busan Paik Hospital, and Ilsan Paik Hospital. A total of 125 formalin-fixed, paraffin-embedded primary liposarcoma specimens were available for examination of PIK3CA aberrations. All diagnoses were reviewed by two experienced pathologists (LJS and HSK) in conjunction with immunohistochemical staining data. Only those cases of confirmed liposarcoma containing tissue adequate for analytic purposes were included. Liposarcoma was classified into 5 histologic subgroups based on Evans Classification [38]: well-differentiated, myxoid, dedifferentiated, round, and pleomorphic.

Patient information was collected by reviewing the medical records for evaluations of clinicopathologic characteristics and survival outcomes. Primary tumors were located in the extremity, retroperitoneum/intra-abdominal region, inguinal area/genital organs, and other.

To assess the presence of PIK3CA gene amplifications, fluorescent in situ hybridization (FISH) assays were performed using a PIK3CA probe that hybridizes to the band 3q26.32 with a Texas Red tag (red) and centromere3 (CEN3) with a FITC tag (green) (Abbott Molecular, Abbott Park, IL), according to routine methods. At least 60 nuclei were evaluated per sample. Twenty contiguous tumor cell nuclei were analyzed from three representative foci. PIK3CA amplification was defined based on previous studies [22, 23, 25, 39]. PIK3CA amplification was defined as if one of the following criteria is fulfilled: (1) PIK3CA/CEN3 ratio was ≥2.0 or (2) the average PIK3CA signal per nucleus >4.0. Polysomy was defined as an average PIK3CA signal per nucleus 4.0 ≥ to > 2.0.

Genomic DNA was extracted from 125 formalin-fixed paraffin-embedded (FFPE) tissue specimens using a QIAamp DNA FFPE Tissue Kit (Qiagen, Hilden, Germany), according to the manufacturer’s instructions. We used a pyrosequencing assay covering the mutational hotspots of interest to sequence exons 9 and 20 of PIK3CA [40]. The exon 9 polymerase chain reaction (PCR) primers were PIK3CA 9-F, 5′-biotin-AACAGCTCAAAGCAATTTCTACACG-3′, and PIK3CA 9-R, 5′-ACCTGTGACTCCATAGAAAATCTTT-3′. The exon 20 PCR primers were PIK3CA 20-F, 5′-biotin-CAAGAGGCTTTGGAGTATTTCA-3′, and PIK3CA 20-R, 5′-CAATCCATTTTTGTTGTCCA-3′. Each PCR mix contained the forward and reverse primers (10 μM each), 12.5 mM dNTP mix, 3 mM MgCl2, 1× PCR buffer, 1 U of AmpliTaq Gold, and 100 ng of sample genomic DNA in a total volume of 25 μL. PCR conditions were as follows: initial denaturation at 95°C for 5 minutes; 50 cycles of 94°C for 30 seconds, 58°C for 30 seconds, and 72°C for 40 seconds; and final extension at 72°C for 10 minutes. The PCR products were electrophoresed in an agarose gel to confirm successful amplification. The PCR products were sequenced using the PyroMark Q24 system (QIAGEN, Germantown, MD, USA), according to the manufacturer’s instructions. Sequencing analysis was performed using PyroMark Q24 software version 1.0.10 in the allele quantification analysis mode.

Associations between histologic features and clinical significance were examined using the χ2 test or Fisher’s exact test where appropriate. Differences were statistically significant when the P-value was <0.05. Disease-free survival (DFS) was defined as the time from surgery to recurrence or last contact. Overall survival (OS) was defined as the time from surgery to death or last contact. Patients who were alive and had no recurrence at the last follow-up were censored. DFS and OS distributions were estimated using the Kaplan-Meier method. The log-rank test was used to determine survival differences between groups. Regression analyses of survival data, based on the Cox proportional hazards model, were conducted on DFS and OS. All data were analyzed using the Statistical Package for the Social Sciences Version 20.0 Software (SPSS Inc., Chicago, IL).