Oncogenic protein SALL4 and ZNF217 as prognostic indicators in solid cancers: a meta‑analysis of individual studies

Background: SALL4 and ZNF217 have been widely acknowledged as pivotal effectors stimulating embryonic immortalization as well as oncogenicity. Nevertheless, their prognostic worthiness towards solid tumors remains obscure. Hence we performed this comprehensive meta-analysis aiming to unveil the survival significance of both aberrantly expressed proteins.

Results: Overall we included 22 eligible entries comprising of 3093 participants. Over-expression of SALL4 and ZNF217 were negatively correlated with clinical prognosis of 3-year, 5-year, 10-year and disease-free survival in solid malignancies, irrespective of cancer types, source regions, mean-age and sex predominance. Results of sensitivity analysis additionally verified the stability of the pooled outcomes. No publication bias was observed on the basis of Egger’s test and Begg’s test.

Methods: Studies were eventually included via database searching and rigorous eligibility appraisal. Data extraction and methodological assessment were implemented under a standard manner. Review Manager 5.3 and STATA 12.0 were utilized as statistical platforms following the recommendations by Cochrane Collaboration protocols.

Over the past decade, the global healthcare system has been heavily burdened by soaring amount of solid malignancies [1]. Including surgical intervention and chemotherapy administration, resistance to current modalities primarily accounts for the growing mortality among cancer patients. Currently, targeted strategy has been regarded as a revolutionary breakthrough for cancer pharmacotherapies and refractory patients. However, partially due to inadequate prognostic evidences, targeted proteins involving in oncogenesis are not well characterized [2]. Therefore, discovery of novel spots for solid malignancies remains essential.

SALL4, expressively silenced in mature entities, is constitutively enriched in embryonic tissue and serves to maintain self-renewal capability [3, 4]. Aberrantly reemerging both in vivo and in vitro, SALL4 was first described as an oncoprotein in leukemia carcinogenesis [5]. Similarly, the oncogenic role of SALL4 has been subsequently confirmed among multiple types of solid malignancies [6]. Nevertheless, its predictive value in prognostication is limitedly reported, which significantly restrains its pharmaceutical prospects.

As a novel zinc finger transcription factor, ZNF217 was initially identified as a tumorigenic stimulator in breast carcinoma and was frequently amplified in diverse malignancies [7]. Accumulating evidences have linked its overexpression to increased chemoresistance and enhanced metastatic capability [8]. However, there is currently no direct evidence concerning the prognostic efficacy of ZNF217 in solid cancers, which has obstructed its clinical applications.

Therefore, as representatives of zinc-finger transcriptional factors with independent performances, we performed this comprehensive meta-analysis aiming to clarify the prognostic roles of SALL4 and ZNF217 in solid malignancies and provide promising targeted spots.

Deriving from 742 preliminarily retrieved entries, 22 observational cohorts were eventually selected (13 for SALL4 and 9 for ZNF217), with a total sample-size of 3093 participants (2111 for SALL4 and 982 for ZNF217). The selection flow chart was depicted in Figure 1. 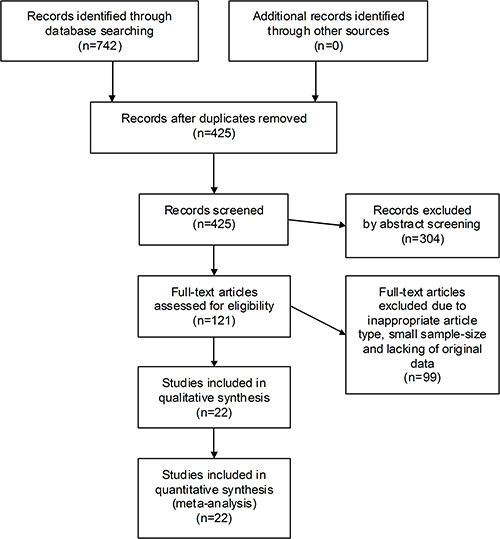 Among the studies featuring SALL4 expression, the chief source region and cancer type were Japan (n = 5) and liver cancer (n = 9) respectively. The wide spectrum of sample-size ranged from 38 to 337, with a median value of 144. Baseline parameters were statistically comparable between both contrastive groups. Additional details were demonstrated in Table 1. 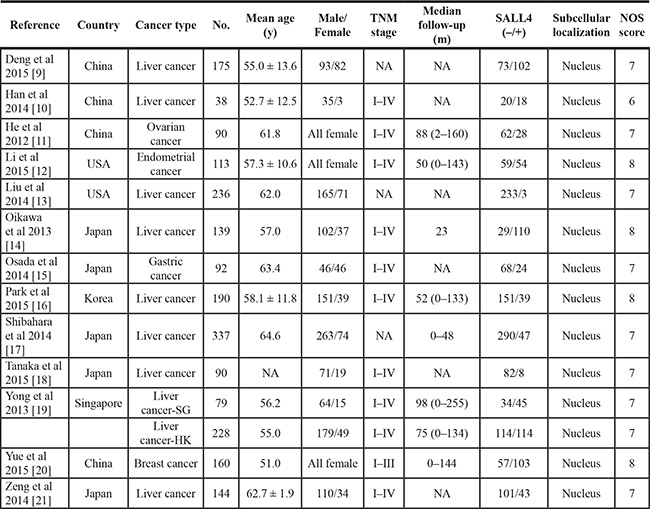 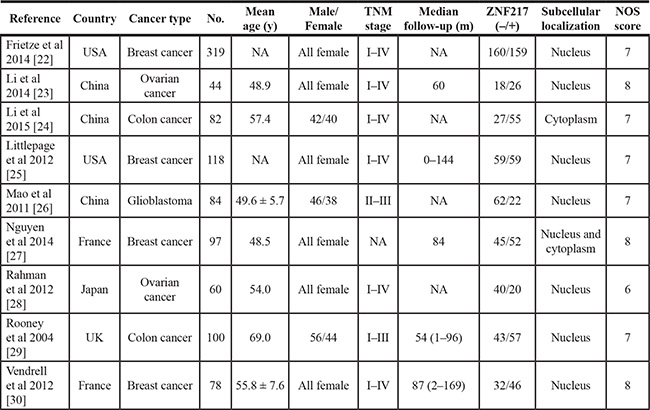 The merged outcome indicated that a worse 3-year overall survival was obtained among patients with overexpression of SALL4 (P < 0.0001) (Figure 2). 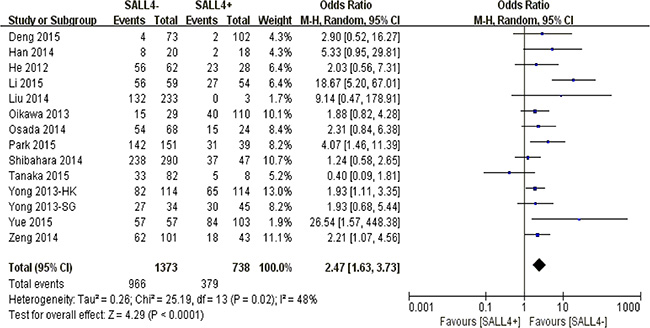 Figure 2: The correlation between SALL4 expression and 3-year overall survival in solid malignancies.

Figure 3: The correlation between SALL4 expression and 5-year overall survival in solid malignancies.

Figure 4: The correlation between SALL4 expression and 10-year overall survival in solid malignancies. 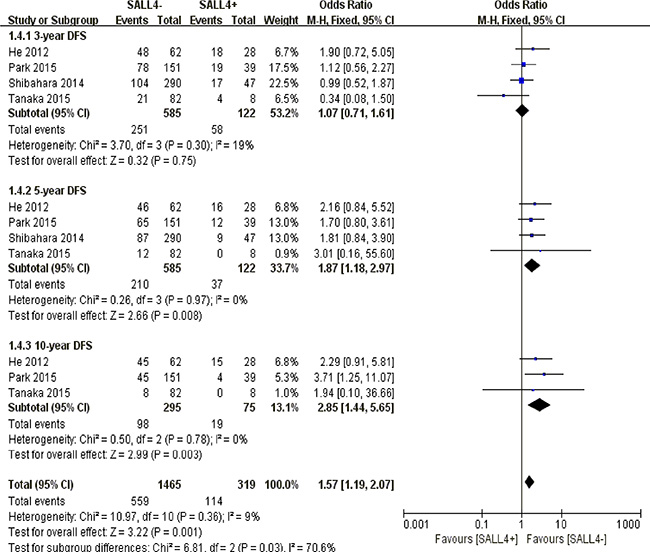 Figure 5: The correlation between SALL4 expression and disease-free survival in solid malignancies.

Figure 6: The correlation between ZNF217 expression and 3-year overall survival in solid malignancies.

Figure 7: The correlation between ZNF217 expression and 5-year overall survival in solid malignancies.

Figure 8: The correlation between ZNF217 expression and 10-year overall survival in solid malignancies. 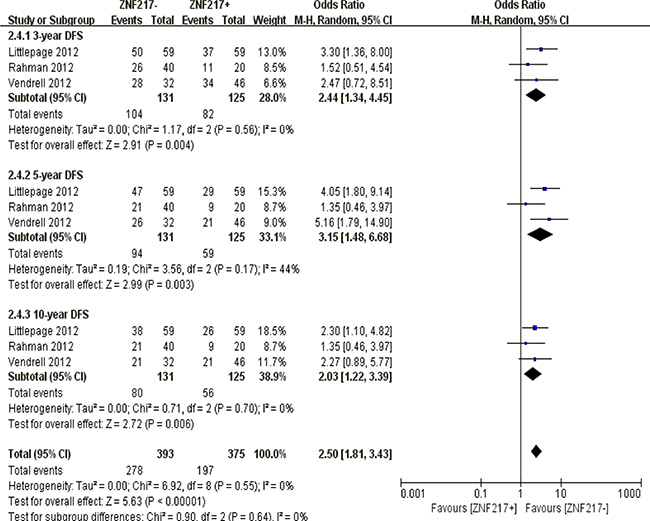 Figure 9: The correlation between ZNF217 expression and disease-free survival in solid malignancies.

Secondly, we implemented another sensitivity analysis by excluding studies with cytoplasmic staining. Nguyen et al. [27] and Li et al. [24] were accordingly eliminated from the meta-analysis of ZNF217. Stable results were confirmed in terms of 3-year (P = 0.0002) or 5-year overall survival (P < 0.00001). 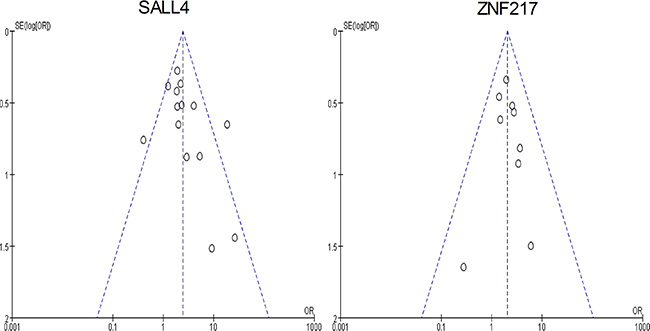 Figure 10: The funnel plots of this meta-analysis.

SALL4 encodes a zinc-finger transcription factor which functionally interacts with cellular effectors to activate the early-stage embryogenesis [32, 33]. Researchers have experimentally confirmed the carcinogenic role of SALL4 in a variety of malignancies. Normally, its expression is dramatically shrunk within mature tissues. The abnormal reemergence of SALL4 has been closely linked to neoplastic transformation in susceptible crowds [34]. Individual cohorts have sporadically revealed the unfavorably prognostic role of SALL4 in certain types of cancer. However, a comprehensive conclusion remains in scarcity. Our study is the first meta-analysis to conclude that SALL4 redundancy is a negative indicator towards long-term survival expectancy in solid malignancies, irrespective of cancer types or source regions. It is academically acknowledged that metastatic dissemination contributes to more than 90 percent of cancer mortality [35]. In-depth investigations have molecularly demonstrated that SALL4 serves as a core activator to elevate the expression of downstream target genes such as Bmi-1 and c-Myc, which subsequently trigger epithelial mesenchymal transition or angiogenesis [36, 37]. This is a probable explanation of the worse prognosis with SALL4 overexpression. Additionally, chemo-resistance is another challenge for therapeutic efficacies. It is already known that upregulation of c-Myc and ABCG2 exacerbates the severity of chemical resistance in multiple cancers. Overexpression of SALL4 is able to enhance the phenotypic positivity of both molecules, therefore its prognostic role is fairly comprehensible [12, 14]. On the other hand, it seems that Li et al. and Tanaka et al. are responsible for the majority of internal heterogeneity across studies, since the removal of both trials thoroughly wipe off the I2 value from 48% to 0%. Contradictory to his own hypothesis, Tanaka et al. [18] (accounting for 13% of heterogeneity) attributed the opposite outcome in SALL4 positive group to the unbalanced patient distribution (SALL4-negative group consists of more intrahepatic cholangiocarcinoma patients who feature a lower SALL4 staining percentage but a poorer prognosis). Nevertheless, Deng et al. [9] described a comparable SALL4 phenotypic pattern in intrahepatic cholangiocarcinoma against hepatocellular carcinoma participants, as well as the similar prognostic expectancy. On this account, more relevant studies are still necessary for further subgroup analysis. Moreover, the partial contribution of Li et al. [12] (accounting for 35% of heterogeneity) in heterogeneity mainly blames on the broader gap between different SALL4 expression levels regarding survival prognosis.

ZNF217 is a newly cloned gene with oncogenic properties. It encodes a Kruppel-like zinc-finger transcription factor which takes effect by nuclear interplay with associated molecules. This transcriptional activator was initially correlated to breast cancer in 1998, capable of promoting immortalization and restoring embryonic phenotypes [38]. It is well characterized that ZNF217-HER3-AKT pathway is frequently activated in invasive ductal breast cancer, which secondarily induces a more aggressive behavior and drug insensitivity through phenotypic alteration [25]. Meanwhile, following overexpression of ZNF217, oncogene PyMT is abnormally amplified and switches the epithelial phenotype towards myomesenchymal-like cell differentiation in murine models, indicating a higher risk of dissemination. C-Myc, a neoplastic effector, functions as a downstream target of ZNF217. A considerable amount of malignant spreads as well as chemical refractoriness arises from the overexpression of c-Myc. As a consequence, it seems theoretically rational that ZNF217 is a predicator of shorter survival in solid malignancies [25, 39]. In agreement with previous individual studies, we meta-analyzed all relevant cohorts and made a globally first statement that ZNF217 amplification had an implication of worse prognosis in solid malignancies, despite of cancer subtypes or sex predominance. Interestingly, apart from the regular staining in nuclei, the discovery by Li et al. [24] suggests a comparably indicative role of ZNF217 cytoplasmic immunoreactivity. This exception of subcellular localization reminds us that further incisive evidence is still required.

There are some limitations in our meta-analysis that should be considered in interpreting the outcomes. Firstly, our pooled analysis is fully on the strength of observational cohorts, which may partially lead to selection bias despite the baseline characteristics are comparable. Secondly, in spite of a thorough database searching, the total amount of included participants may still be insufficient to draw a consolidated result.

Taken together, we made a statistical evidence of unfavorable role of SALL4 and ZNF217 overexpression on survival expectancy. Their pharmaceutical blockage may benefit distant recurrence or chemical resistance.

We carried out the literature retrieval by searching databases of PubMed and Web of Science until October 2015. The search terms “SALL4 or ZNF217” was utilized to amplify the searching range. In order to guarantee the accuracy and completeness, both full-texts and citation list of potential studies were examined, apart from the abstract screening.

Studies that accorded with the following criteria were included: 1. English written articles; 2. Human studies regarding correlation between SALL4 (or ZNF217) expression and clinical prognosis in solid malignancies; 3. The expression of SALL4 or ZNF217 was detected by immunohistochemistry (IHC).

Studies were ruled out due to the following reasons: 1. Inadequate survival data for further quantification or the follow-up duration was shorter than 3 years; 2. Overlapped or duplicated studies; 3. Inappropriate article types such as reviews and case-reports; 4. Studies involving less than 10 participants as its sample-size.

Two investigators independently implemented the selection process and any disagreement was settled by mutual discussion.

Standardized extraction forms were applied for data extraction. Concerning the classification standards of SALL4 and ZNF217 expression, we generally recognized low-expression as < 25% of cell positivity while high-expression as > 25% of cell positivity. However, this criterion was adaptively adjusted if necessary, mainly based on original subgroups within individual trials. Two authors collaboratively extracted prognostic materials from main texts or Kaplan-Meier curves.

Owing to the observational properties of included studies, a Newcastle-Ottawa Scale (NOS) was employed for methodological evaluation. The scale consisted of three categories including selection, comparability and outcome, with a maximum score of nine. Studies graded with more than six scores were identified as high quality trials in methodology. Each study was appraised by two evaluators in an independent way. Any disapproval was resolved by mutual discussion.

Our quantitative calculation was performed on Review Manager 5.3 under Cochrane Collaboration protocols. Odds ratio (OR) along with Mantel-Haenszel model were adopted for dichotomous variables. We acknowledged I2 as a heterogeneity indicator with its value < 25%, 25%–50% and > 50% defined as low, moderate and significant heterogeneity respectively. A moderate or significant heterogeneity was adjusted by a random-effects model, otherwise a fix-effects model was preferred. The statistical significance within all comparisons was mathematically signified as P < 0.05. Moreover, sensitivity analysis was applied to examine the stability of pooled outcomes. Publication bias was statistically analyzed via Egger’s test and Begg’s test, based on the results from STATA 12.0.

We sincerely thank our lab members for offering methodological assistances.

This study was only supported by Research Fund of Public Welfare in Health Industry, Health and Family Plan Committee of China (No.201402015), not including National Natural Science Foundation of China (No.81372559).

We declare that there is no conflicts of interest among all authors.