Purpose: The main aim of this study is to analyze the prognostic differences in nasopharyngeal carcinoma (NPC) patients who are positive and negative for Epstein-Barr virus (EBV).

Conclusions: EBV status was an independent prognostic factor for patients with stage III–IVB NPC. Neoadjuvant chemotherapy (NCT) plus concurrent chemoradiotherapy (CCRT) should be better treatment regimen for EBV-positive patients since distant metastasis was the main failure pattern, and CCRT may be enough for EBV-negative patients.

Worldwide, there are an estimated 84,400 new cases of nasopharyngeal carcinoma (NPC) and 51,600 NPC-related deaths in 2011 [1]. NPC has an obviously skewed geographical distribution, with an age-standardized incidence rate of 20–50 per 100 000 males in South China and a rate of 0.5 per 100 000 males in Caucasian populations [1]. Due to the anatomic constraints and its high degree of radiosensitivity, radiotherapy is the primary and only curative treatment for NPC. Despite its known limitations, TNM staging remains the most important prognostic factor in NPC currently [2]. Many new prognostic factors have also been reported, including plasma Epstein-Barr virus (EBV) DNA [3-5], primary tumor volume [6, 7], pre-treatment serum lactate dehydrogenase [8] and presence of comorbidities [9].

On the basis of this premise, we conducted this retrospective study to evaluate the impact of tumor EBV status on survival outcomes in advanced-stage NPC patients in the era of intensity-modulated radiation therapy (IMRT).

Table 1: Baseline Characteristics of the 1106 patients with Advanced-Stage NPC

bAccording to the 7th edition of the AJCC/UICC staging system.

Table 2: Failure Patterns in EBV-negative and EBV-positive Patients with NPC 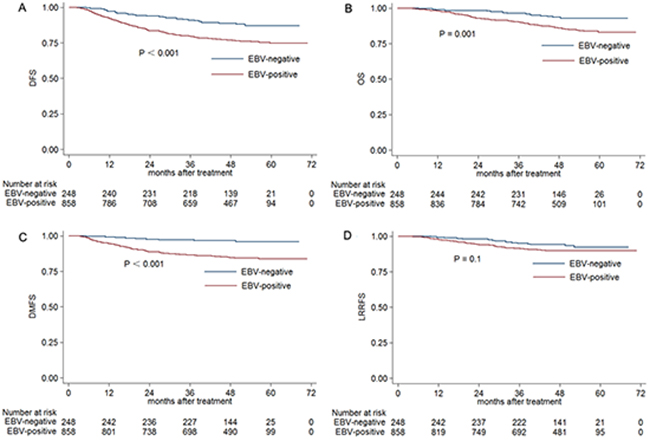 The following variables were included in the Cox proportional hazards model with backward elimination: gender (male vs. female), age (≥50 y vs. <50 y), pathology (type I vs. type II/III), family history (yes vs. no), smoking (yes vs. no), drinking (yes vs. no), overall stage (III vs. IV), treatment regimen (IMRT vs. IMRT + NCT/ACT vs. CCRT +/- NCT/ACT), EBV status (negative vs. positive).

Subgroup analysis according to the clinical stage

Table 4: Subgroup Analysis of the EBV-negative and EBV-positive Groups According to the Clinical Stage

To the best of our knowledge, this current study is the first large-scale study to report the impact of EBV status on the prognosis of patients with stage III–IVB NPC in a population with a high prevalence of EBV infection and NPC. Distant metastasis had been the main treatment failure pattern for EBV-positive patients. The results of univariate analysis may be less meaning because of the unbalanced distribution of tumor stage and treatment intensity. However, the outcomes of multivariate analysis showed that patients with positive EBV have an obviously poorer prognosis than EBV-negative patients, and overall stage still remained the most important prognostic factor. Moreover, subgroup analysis revealed that this difference was mainly observed in patients with T3, N1 disease and overall stage III.

Previous study had discussed the different pathogenesis in EBV-negative and EBV-positive NPC [13]. EBV-associated NPC follows a stepwise malignant transformation consists of latent EBV infection, evasion of host immune surveillance, loss of heterogeneity at specific chromosomal regions, genetic mutations and activation of oncogenic signaling pathways, and epigenetic silencing of tumor suppressor genes [15, 16]. However, human papilloma virus (HPV) has been considered as a contributing factor in EBV-negative NPC in non-endemic regions [17-21] and is correlated to poor prognosis [21]. However, patients with negative EBV in our study had obviously better prognosis than EBV-positive patients, which was inconsistent with the results of the study by Stenmark et al. [21]. This indicated that EBV-negative patients in the endemic region did not have HPV infection.

The current study revealed that patients who are negative for EBV have a better prognosis than those who are positive for EBV. However, two main limitations may exist in this current study. First, our study was a retrospective one for which the follow-up time was insufficient, so DFS was chosen as the major endpoint to address this shortcoming. Moreover, the judgement of EBV status was only based on plasma EBV DNA level and more accurate diagnosed criteria should be used in future studies. Future prospective clinical studies should be warranted to confirm the results of this current study.

We retrospectively analysed 1811 patients with previously untreated, biopsy-proven NPC with no evidence of distant metastasis, who were treated between November 2009 and February 2012 at Sun Yat-sen University Cancer Center. Patients with advanced-stage NPC (III–IVB) and pre-treatment plasma EBV DNA data were recruited, so only 1106 patients were analysed further. This study was conducted in compliance with the institutional policy regarding the protection of patients’ private information and was approved by the Research Ethics Committee of Sun Yat-sen University Cancer Center. Informed consent was obtained from all the patients.

All patients were restaged according to the 7th edition of the International Union against Cancer/American Joint Committee on Cancer (UICC/AJCC) system [25]. All MRI materials and clinical records were reviewed to minimize heterogeneity in the restaging. Two radiologists (L.Z.L. and L.T.) employed at our hospital separately evaluated all the scans, and disagreements were resolved by consensus.

Before treatment, peripheral blood (3 ml) was collected from each patient, placed in an ethylene diamine tetra acetic-coated tube, and centrifuged at 1600 g for 15 min to isolate plasma and peripheral blood cells (PBCs). The plasma samples were stored at −80°C until further processing. DNA was extracted from plasma using the QIAamp Blood Kit (Qiagen, Hilden, Germany) and the blood and body fluid protocol recommended by the manufacturer. A total of 500 μl of each plasma sample was used for DNA extraction per column, and the final elution volume was 50 μl per column.

All patients underwent IMRT at Sun Yat-sen University Cancer Center. Immobilization was carried out using a custom-made head-to neck-thermoplastic cast with the patient’s neck resting on a support. A high-resolution planning CT scan with contrast was taken from the vertex to 2 cm below the sternoclavicular joint at a slice thickness of 3 mm. Target volumes were delineated slice-by-slice on treatment planning CT scans using an individualized delineation protocol that complies with the guidelines of the International Commission on Radiation Units and Measurements reports 50 and 62. The prescribed doses were 66–72 Gy at 2.12–2.43 Gy/fraction to the planning target volume (PTV) of the primary gross tumour volume (GTVnx), 64–70 Gy to the PTV of the GTV of the involved lymph nodes (GTVnd), 60–63 Gy to the PTV of the high-risk clinical target volume (CTV1), and 54–56 Gy to the PTV of the low-risk clinical target volume (CTV2). All targets were treated simultaneously using the simultaneous integrated boost technique.

Patient follow-up was conducted from the first day of therapy to the day of last examination or death. Patients were examined at least every 3 months during the first 2 years, with follow-up examinations conducted every 6 months thereafter until death. DFS was set as the first endpoint, and secondary endpoints included OS, DMFS and LRRFS.

In summary, our current study confirmed that the EBV status was found to be an independent prognostic factor for patients with stage III–IVB NPC. NCT plus CCRT should be better treatment regimen for patients with positive EBV since distant metastasis was the main failure pattern, and CCRT may be enough for EBV-negative patients since distant metastasis was not the main failure pattern.