Patients and methods: We conducted a retrospective study of all patients tested for mutations of these three genes at a single institute in Korea between 2006 and 2014. Study data were extracted from electronic medical records. Univariate and multivariate logistic regression analyses were used to measure associations between clinicopathologic features and alterations of EGFR, KRAS, and ALK.

Conclusions: This is the largest three gene molecular epidemiology study in East Asian NSCLC patients. Each genetic alteration was associated with distinct clinicopathologic characteristics. Furthermore, different age and sex are associated with different subtypes of EGFR and KRAS mutations.

EGFR, KRAS, and ALK alterations are the major genetic changes in lung adenocarcinoma[1]. Drugs targeting EGFR and ALK have improved clinical outcomes in patients with mutations in those genes[2, 3]. Since targeted therapy was discovered, mutation testing has increased[4, 5]. Molecular testing of EGFR and ALK in lung adenocarcinoma is recommended by the guidelines from College of American Pathologists, the International Association for the Study of Lung Cancer, and the Association for Molecular Pathology[6].

Genetic alterations of EGFR, KRAS, and ALK typically are mutually exclusive[35]. However, exceptional cases may have concurrent mutations of those genes[36–39]. Sometimes, mutations of other genes can occur after chemotherapy, which can cause resistance to targeted therapy[40–43].

In this study, we characterized the clinicopathologic features and genetic changes associated with EGFR, KRAS, and ALK in lung cancer.

A total of 7,463 EGFR mutation tests were performed on samples from 6,878 patients. There were 55 failed tests due to insufficient biopsy materials. Test materials from 254 cases were not from lung cancer. Thus 7,154 tests and 6,583 patients remained (Figure S1). Of these, 545 patients were tested for EGFR mutation more than once. Among those patients, 11 had second primary tumors and 1 had a third primary tumor. Among the 6,595 tumors, 2,387 had EGFR mutations, and 60 had more than 2 EGFR mutations other than T790M.

Differences between types of EGFR mutations 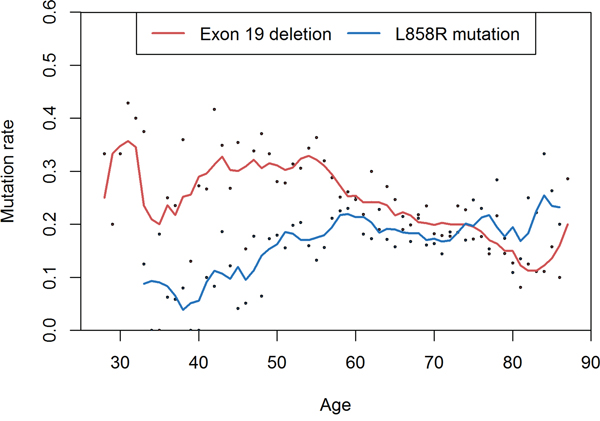 a: p-value is less than 0.001 in univariate analysis 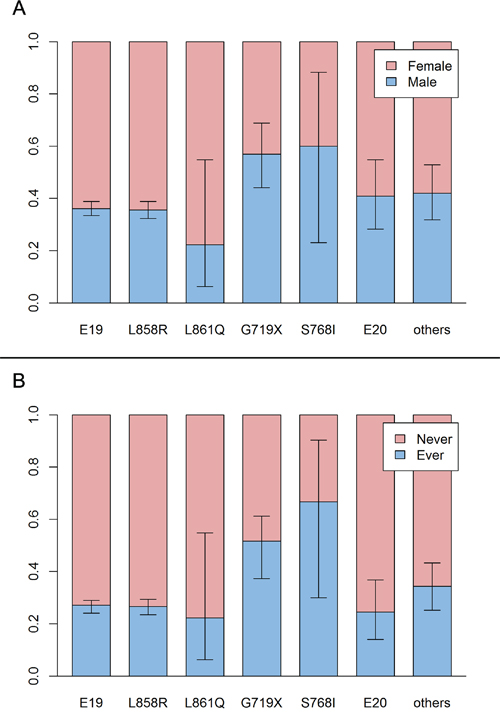 PD: progressed disease, NA: not accessible due to short follow up time 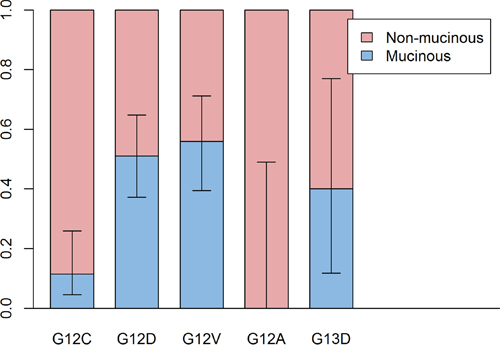 a: p-value is less than 0.01 in univariate analysis

Among tumors with EGFR mutations, 12 had additional mutations in KRAS (N= 6) or ALK (N=6) (Figure S6). Three of these EGFR mutations were detected only by PNA clamping and not by Sanger sequencing. Nine of these EGFR mutations were confirmed by Sanger sequencing, seven of which were major subtypes of EGFR mutation (deletion in exon 19 and L858R point mutation). Four were G719X point mutations, comprising 33% of the double mutants, which is a higher proportion than that observed in tumors having only EGFR mutations. The other EGFR mutation was an R803W point mutation, a very rare subtype. In five tumors, KRAS mutations presented at codon 12 or 13, and one tumor had two KRAS mutations, at codons 21 and 34. Among the six ALK alterations tested by immunohistochemistry, two were confirmed by FISH. The mean age of patients having both EGFR and ALK mutations was higher than that of patients having ALK rearrangements (P=0.012). Except for one tumor, tumors having both EGFR and KRAS mutations were moderately differentiated. Tumors having both EGFR and ALK mutation tended to be poorly differentiated. Nine of 15 patients had stages higher than III. One patient had a history of EGFR targeted therapy and ALK targeted therapy prior to mutation testing. The remaining patients had no history of targeted therapy prior to mutation tests. Six patients were treated with EGFR tyrosine kinase inhibitors and three were treated with ALK inhibitors. The follow-up period was insufficient to measure response (Table 4).

Table 4: Patients having EGFR mutation plus KRAS or ALK mutations

We analyzed data from a large number of lung cancer patients from a single institution, assessing genetic alterations of EGFR, KRAS, and ALK. Most results were consistent with previous reports[7, 10, 16, 48]. However, contrary to previous reports[18, 19], EGFR mutations were more frequent in tumors from patients between 40 and 64 years of age than from other age groups. The relationship between age and EGFR mutation frequency was different with different mutation type. Exon 19 deletions occurred frequently in patients under 65, while L858R point mutations occurred frequently in patients over 40. Summing these data, the EGFR mutation frequency was highest in middle-aged patients. One report describes similar comparison of age between EGFR mutation subtypes[7]. Although it did not reach statistical significance in multivariate analysis, the G719X point mutation was frequent in men and smokers than other mutation subtypes. Of the 81 patients with G719X mutations, 44 (54%) were men and 39 (48%) smoked. This finding is similar to a previous report[39].

KRAS mutations were frequent in men, older patients, smokers, adenocarcinomas, mucinous tumor types, large-sized tumors, poorly differentiated tumors, and tumors with a solid pattern, consistent with previous reports[23, 24]. ALK rearrangements were frequent in younger patients, those who never smoked, adenocarcinomas, poorly differentiated tumors, signet ring cell types, and tumors with cribriform or solid patterns, also consistent with previous reports[33, 47]. All KRAS mutations were point mutations. Like the L858R point mutation of EGFR, the KRAS mutation rate increased as patient age increased. All ALK mutations were chromosomal rearrangements. Like ALK rearrangements in other tumors[52, 53], ALK rearrangements in lung cancer frequently occur in younger patients. G13C mutations were infrequent in mucinous types compared with G12D and G12V point mutations. According to another report, G12C is associated with smokers and G12D is associated with never smoking[7]. However, in our data, smoking was not an independent factor in multivariate analysis.

Since our data were extracted from past medical records, some data were missing, and the data may contain inaccuracies. The number of cases was large enough to measure detailed trends of association between clinicopathologic features and genetic alterations of EGFR, KRAS, and ALK. EGFR exon 19 deletions and L858R point mutations tend to occur at different ages. The EGFR G719X point mutation differs from other subtypes in that age and sex are equal, and G719X commonly coexists with another gene mutation. The KRAS G12C point mutation was less frequently associated with mucinous type. However, more cases are required to characterize other rare subtypes of EGFR and KRAS mutations.

We conducted a retrospective study of all patients whose tumors were tested for EGFR, KRAS, and ALK mutation at the Samsung Medical Center (Seoul, Korea) from 2006 to 2014. The study was approved by the Institutional Review Board of the Samsung Medical Center. The requirement for informed consent was waived, as the study was based on existing data.

Study data were automatically or manually extracted from electronic medical records. Clinical data included sex, age when testing was performed, smoking history, origin of cancer, and EGFR, KRAS and ALK mutation status. Data regarding EGFR testing methods included biopsy methods, organs biopsied, tumor proportion of material sampled, test methods, report date, ΔCT-1(the difference in CT value between the negative control and test sample[44]) and test results including the type of EGFR mutation. Pathologic data included tumor type, histologic pattern, tumor size, pathologic stage, and the presence of lymphatic, vascular, or pleural invasion. All pathologic data except type of tumor refers only to resected tumors. Histologic pattern was assessed only for adenocarcinoma. When an EGFR mutation was identified together with a KRAS or ALK mutation, the tissue slide and chromatogram of Sanger sequencing were reviewed.

Detection of alterations of EGFR, KRAS and ALK

ALK gene alteration was detected by immunohistochemistry or fluorescence in situ hybridization(FISH)[47].

We used means and standard deviations to summarize continuous variables and counts and numbers with percentages to summarize categorical variables. Age was categorized into three groups: group 1, younger than 40 years; group 2, between 40 and 64 years; group 3, older than 64 years. Univariate and multivariate logistic regression analyses were used to determine the association between each variable and EGFR, KRAS and ALK mutations. Differences between subtypes of EGFR and KRAS mutations were tested using multinomial logistic regression. P-values of less than 0.01 were considered statistically significant.

The authors declare no conflicts of interest with regard to the present paper.