SNP-SNP interactions of three new pri-miRNAs with the target gene PGC and multidimensional analysis of H. pylori in the gastric cancer/atrophic gastritis risk in a Chinese population

Although single nucleotide polymorphisms (SNPs) are potential predicting biomarkers of cancer risk, they have limited use for multistage complex diseases involving multiple genes [1–3]. Several studies have reported that gene–gene interactions are more important than single genes in promoting cancer susceptibility [3–5]. For example, polymorphisms that individually have a weak effect can have a strong effect when acting together [6]. Similarly, in epistasis, which is a phenomenon that consists of the effect of complex interactions, is greater than the main effects of any single susceptibility gene [5, 7].

MiRNAs bind to the 3′-untranslated regions of coding genes to suppress or downregulate gene expression. Translational regulation is performed by a network of miRNAs and target genes such that one miRNA can regulate multiple different genes, or one target gene can be regulated by several miRNAs [8]. In recent years, several studies have simultaneously screened miRNA SNPs and target gene SNPs, and interactions between specific pairs to promote carcinogenic effect have been identified [9].

We previously screened miRNAs targeting a single gene, and identified three different miRNA polymorphisms (pri-let-7e rs8111742, pri-miR-365b rs121224 and pri-miR-4795 rs1002765) that had no or only weak effects on gastric cancer (GC) and atrophic gastritis (AG) risk (unpublished data). However, these three miRNA SNPs were all located in the promoter region of miRNA genes (rs8111742 at −565 bp of the let-7e gene, rs121224 at −430 bp of the miR-365b gene, and rs1002765 at −1635 bp of the miR-4795 gene), suggesting that they may be functional polymorphisms. All miRNAs were predicted to stimulate/inhibit pepsinogen C (PGC) gene, which is expressed by terminally differentiated gastric mucosa cells. PGC is a diagnostic biomarker for GC and AG (precancerous disease) [10]. Our colleagues investigated the association between each of the seven PGC SNPs and GC and/or AG, and found that five PGC SNPs were linked to GC or AG risk, while two (PGC rs6912200 and rs6941539) had no significant association with cancer risk [11, 12]. We therefore hypothesized that the former may be optimal candidates for investigating potential SNP–SNP interactions for miRNA SNPs-PGC SNPs at two or more genetic loci. It was unclear whether there were interactions among these SNPs and whether detecting combinations of them could enhance the risk prediction for GC or AG.

This study was based on previous a case–control study in a Chinese population (unpublished data) and investigated two- and three-dimensional interactions between miRNA SNPs, SNPs in its predicted target gene PGC, and H. pylori infection status. It may identify combination biomarkers for early GC.

The demographic and geographic characteristics of study participants are shown in Supplementary Table S1 (including age, sex, and H. pylori infection status). There was no significant difference in the age and sex distribution among the GC, AG, and control groups.

Table 2: Epistatic effect of pair-wise interacting factors on the risks of gastric cancer and atrophic gastritis

We also investigated interactions between different miRNA SNPs but found no significant interaction with either the GC or AG risk (P > 0.05; Supplementary Table S2).

Multidimensional analysis of SNP–SNP interactions between miRNA and PGC with H. pylori status

Table 3: The interaction of miRNA SNP-PGC SNP stratified by H. pylori infection in the risk of atrophic gastritisa

Table 4: The interaction of three miRNA polymorphisms with H. pylori infection status in the risk of gastric cancer/atrophic gastritisa 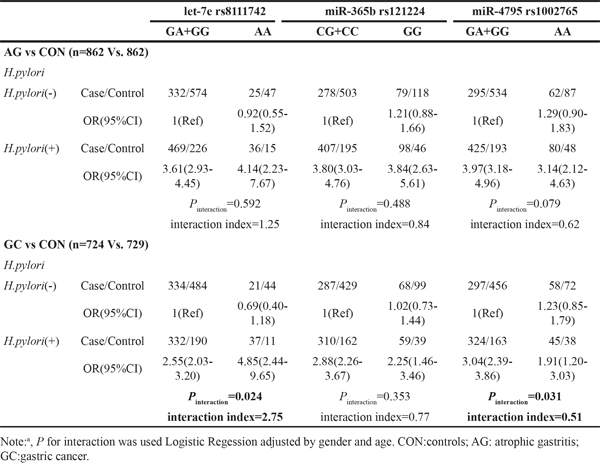 Table 5: The three dimensions interactions of the miRNA SNP-PGC SNP-H. pylori infection status with the risk of atrophic gastritis/gastric cancera

Note: a, adjusted by sex and age.

We further verified all the three-way interaction models composed of the miRNA SNPs, PGC SNPs and H. pylori, and found they were all verified by MDR (all: significant test P = 0.0010, and P for permutation test = 0.0000–0.0005, Supplemental Table S3).

Recently, several association studies about miRNA SNPs in gastric cancer risk have been published, including SNPs for miR-146a, miR-196a-2, miR-499, miR-149, miR-27a and miR-34b/c [16, 17]. But there is still no report about other miRNA SNPs, especially the interaction with its targeted gene SNPs. In this study, we reported for the first time about the interaction of three new miRNA SNPs and their target gene SNPs. A series of miRNA SNPs (let-7e rs8111742, miR-365b rs121224, and miR-4795 rs1002765), PGC target gene SNPs (rs4711690, rs6458238, rs9471643, rs3789210, rs6912200, rs6939861 and rs6941539), and H. pylori infection were candidate factors in first a two-way interaction and then a three-way interaction analysis. The analysis showed that two pairwise miRNA SNP – PGC SNP combinations contribute to AG risk. miR-365b rs121224 and PGC rs6912200 polymorphisms had no effect individually but an epistatic interaction for AG risk was noted when they were present together. Furthermore, two-way interactions and the addition of H. pylori infection as a risk factor demonstrated three-way interaction contributing to the GC and AG risks. This result suggests that the combined detection of miRNA SNPs, PGC SNPs, and H. pylori positivity is a significantly better method of detecting GC and AG risk compared with a single factor.

So far, several studies have shown an association between epistatic effects and cancer risk [20–22]. We also found individual SNPs at single loci that had previously shown no effect on disease risk caused epistasis when combined [23]. In this study, the strongest epistatic interaction was the pairwise miR-365b rs121224 – PGC rs6912200 combination. Both the rs121224 GG genotype and the rs6912200 TT genotype were associated with an increased risk of AG, but only in combination. Another two pairs of factors with epistatic effects were identified: the miR-4795 rs1002765 AA genotype was associated with a decreased risk of AG, but only in the presence of the PGC rs9471643 GC+CC genotype; and PGC rs6941539 CT+TT genotype was associated with a decreased risk of GC, but only in the presence of the let-7e rs8111742 AA genotype. These epistatic effects demonstrate that miR-365b rs121224, miR-4795 rs1002765, and the PGC rs6912200 and rs6941539 polymorphisms contribute to gastric carcinogenesis in a pairwise pattern. In all, this evidence suggests that the combination of miRNA SNPs and PGC SNPs could have a synergistic effect on gastric carcinogenesis. Concerning the possible mechanism for this SNP-SNP interaction, as miRNA could combine the 3’-untranslated region of the targeted gene, PGC protein could protect the mucosal epithelial cell [10], thus, individuals carrying the dual variation in miRNA and PGC gene might cause the decreasing protection function to gastric mucosa and thus increase the risk of gastric cancer. Anyway, the molecular mechanism was not clear now and further functional study would be required.

Our study has several limitations. First, although this research already contained a relative large sample, the sample size still needs to be enlarged to confirm the interaction effect results, especially for rare genotypes. And also an independent replication is urgently encouraged for verification of our present study in the further. Second, other environmental factors and clinical pathological parameters should be included so that potential interactions between SNPs and other factors such as smoking and drinking can be analyzed.

In summary, this study found that two pairwise interacting miRNA SNP – PGC SNP combinations were associated with increased AG risk (let-7e rs8111742 – PGC rs6458238 and miR-4795 rs1002765 – PGC rs9471643), which were consistently identified by two different statistical approaches: multi-logistic regression and MDR analyses. In addition, the miR-365b rs121224 and PGC rs6912200 polymorphisms had no effect but demonstrated an epistatic effect when present together on the AG risk. Three-way interaction analysis showed that miR-4795 rs1002765 – PGC rs9471643 – H. pylori (+) had a positive interaction in AG risk and let-7e rs8111742 – PGC rs6458238 – H. pylori (+) had positive interaction in GC risk. These three-way interactions both had dose–effect correspondence. In conclusion, the miRNAs SNPs (let-7e rs8111742 and miR-4795 rs1002765) might have more superior efficiency when combined with PGC SNPs and/or H. pylori for GC or AG risk than a single SNP on its own.

This study was approved by the Ethics Committee of the First Affiliated Hospital of China Medical University, Shenyang, Liaoning. The demographic and geographic characteristics of study participants are shown in Supplementary Table S1, which relates previously published data [12]. A total of 2448 individuals were recruited in this case–control study: 862 AG patients and 862 healthy individuals matched by age and sex (control group); and 724 GC patients. For GC risk analysis, 729 individuals in the control group matched by age and sex were selected to compare with the GC group. Healthy control and AG tissue samples were selected from a GC screening program that took place in the Zhuanghe area of Liaoning Province between 1997 and 2008. GC patients were recruited individuals who underwent surgery at the First Affiliated Hospital of China Medical University. Informed consent was obtained from all participants and medical information (included age, sex) was collected by questionnaire survey or interview. Peripheral venous blood samples were taken from all participants, and all underwent gastroscopic examination and biopsy collection; disease was confirmed by a histopathological diagnosis by two independent pathologists. The diagnosis for the control group was normal or slight superficial gastritis and AG was diagnosed used the Sydney classification [26, 27]. The inclusion criterion for the AG group was histologically confirmed medium or severe AG [28].

Genomic DNA was extracted from venous blood as previously described [29]. The DNA concentration was adjusted to 20 ng/μl. SNP genotyping was performed using Matrix assisted laser desorption/ionization time of flight mass spectrometry, as previously described [12]. Ten percent of all samples were re-analyzed to verify the result: the consistency rate was higher than 99%.

This study defined the heterozygote plus rare homozygote compared with the wild-type genotype as the dominant model, the mutant genotype compared with the wild-type genotype plus the heterozygote as the recessive model, and the heterozygote compared with the wild-type plus the mutant genotype as the complete overdominant model [15]. The distribution of demographic characteristics and the genotype in case and control groups was tested using χ2 test. Multivariate logistic regression analysis adjusted by age, sex, and H. pylori status was used to assess the OR and 95% confidence interval for the GC and AG risks. The log likelihood ratio test was used for the interaction analysis between miRNA SNP, PGC SNP, and H. pylori status. The Cochrane–Armitage test for linear trends was used to judge the dose–effect relationship between GC/AG risk and an increasing number of risk genotypes. All the risk factors including miRNA SNPs, PGC SNPs and H. pylori identified in the best models of gene–gene interactions were calculated using MDR software (version 3.0.2) and MDR permutation testing software (version 1.0 beta 2) [32] in order to confirm the multivariate logistic regression results. All statistical tests were performed using PASW Statistics for Windows, Version 18.0 (SPSS Inc., Chicago, IL, USA) and Stata version 11.0 (StataCorp, College Station, TX, USA). All tests were two sided and statistical significance was set at P < 0.05.

27. Stolte M, Meining A. The updated Sydney system: classification and grading of gastritis as the basis of diagnosis and treatment. Canadian journal of gastroenterology. 2001; 15:591-8.