Autophagy, the cell process that degrades unused cytoplasmic components and damaged organelles, relieves cells from stress and represent an important catabolic process that maintains cellular energy level during starvation [1]. In rheumatoid arthritis (RA), autophagy is deregulated and can favor synovial fibroblast cell survival or synovial fibroblast cell death [2]. Furthermore, autophagy is found to be more prominent in synovial fibroblasts from RA patients than in synovial fibroblasts from osteoarthritis (OA) patients and represents one of the markers for OA to RA transition in vitro [3]. However, autophagy has a dual role in rheumatic diseases [2] because of its protective effect on cartilage [4, 5]. Enhanced autophagy, through inhibition of mTOR has been proposed as an effective treatment in OA [4, 6, 7]. Furthermore, glucocorticoids, one of the most powerful anti-inflammatory drugs used in rheumatic diseases, have been shown as autophagic inducers in chondrocytes, although their prolonged application led to autophagy inhibition [8].

Autophagy mediates cell fate through the cross-talk with apoptosis [9]. In some cases autophagy can protect cells from apoptosis [8], while autophagy can also act as agonist of apoptosis [10]. Our previous work showed that BAY 11-7085, a potent NF-κB inhibitor, induces apoptosis in human synovial fibroblasts, through inactivation of PPAR-γ [11, 12]. PPAR-γ, a transcription factor involved in adipocyte differentiation, fatty acid storage and glucose metabolism, is involved in metabolic diseases such as obesity and diabetes [13]. However, PPAR-γ is also involved in cell survival and apoptosis [10-12], as well as in autophagy [10]. Thus, in this work we have studied possible involvement of autophagy in BAY 11-7085-induced human synovial fibroblasts apoptosis.

BAY 11-7085 induces the increase of LC3B-II, GR phosphorylation on Serine 211, as well as GR down regulation in human synovial fibroblasts

Glucocorticoids are known inducers of autophagy in several cell types [14, 15]. To study possible involvement of autophagy in BAY 11-7085-induced apoptosis, we have monitored the expression of LC3B, a marker of autophagy, in BAY 11-7085- or prednisolone-treated synovial fibroblasts, from 10-120 minutes (Figure 1). Western blot have shown that BAY 11-7085 induced an increase of autophagosomal marker LC3B-II, a lipidated form of LC3B, from 10-60 minutes, that ceased and that was down regulated from 90-120 min of cell treatment (Figure 1). Prednisolone induced increase of LC3B-II from 20-120 minutes, suggesting autophagy. Prednisolone also markedly induced GR phosphorylation on Serine 211 as well as GR down regulation (Figure 1). Of interest, similarly to prednisolone, BAY 11-7085 induced GR phosphorylation of Serine 211 (Figure 1). Furthermore, as prednisolone, BAY 11-7085 markedly down regulated GR expression (Figure 1). These results suggested GR activation and GR autoregulation that was shown earlier [16]. Furthermore, these results suggested that BAY 11-7085-induced autophagy and GR activation might be interconnected. 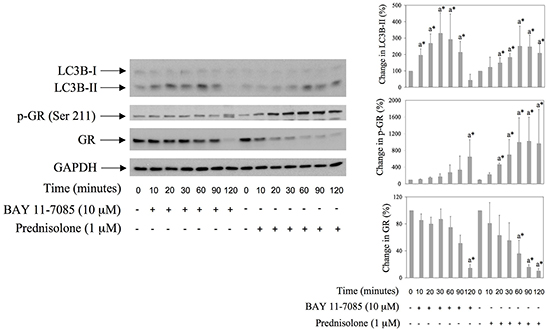 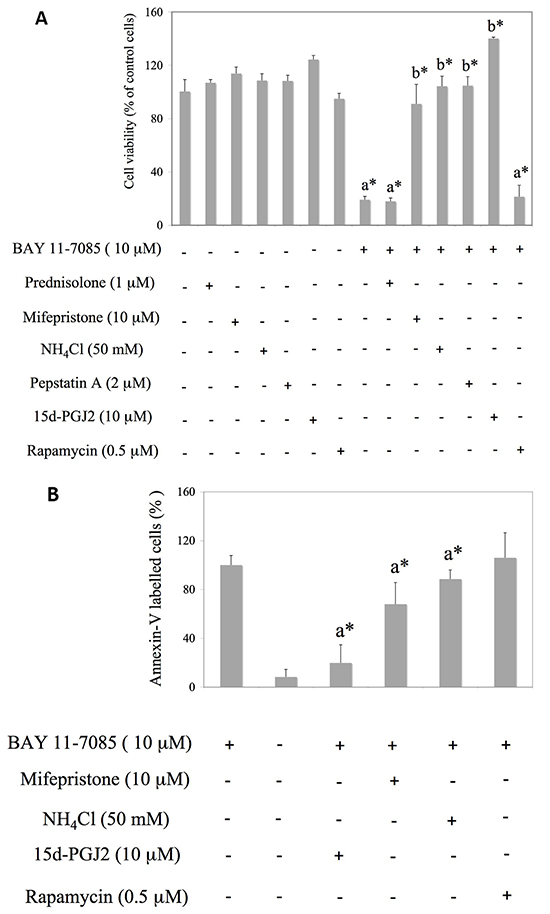 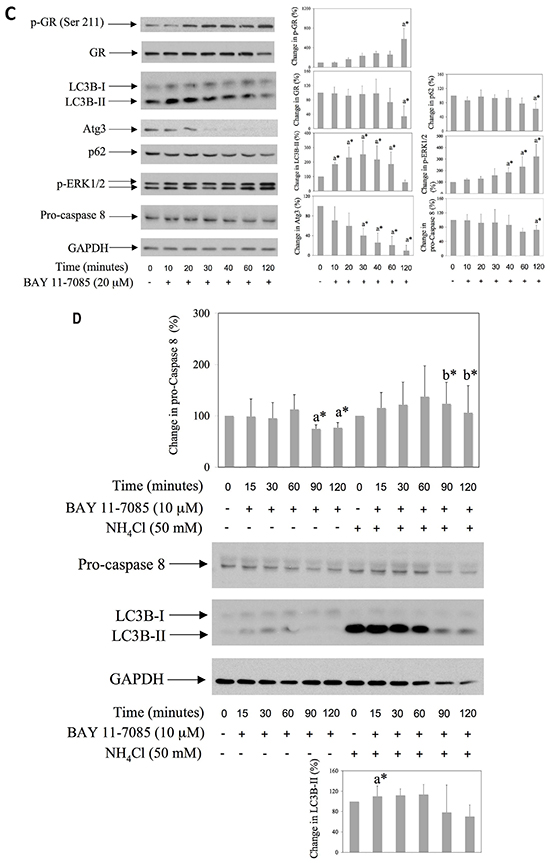 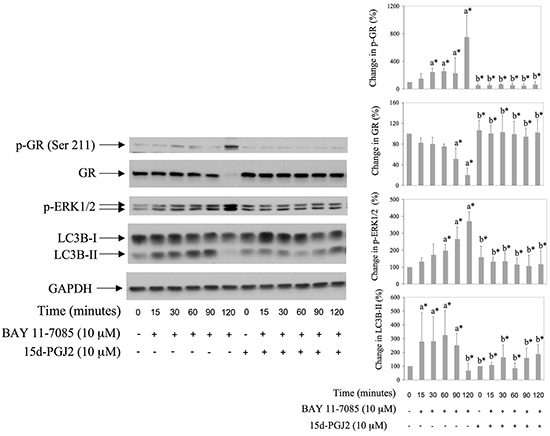 Figure 3: BAY 11-7085 induced autophagy, GR phosphorylation on Serine 211 and GR degradation are inhibited with PPARγ agonist 15d-PGJ2. Synovial fibroblasts were pretreated with 15d-PGJ2 for 24 hours and then BAY 11-7985 was added for the time indicated. Western blots show expression of p-GR (Ser 211), GR, p-ERK1/2, LC3B and GAPDH in synovial fibroblast cell extracts. Graphs represent average of protein expression from three different experiments done with synovial fibroblasts from three different OA patients, expressed as a percentage of control. a* statistically different from control cells; b* statistically different from a*. 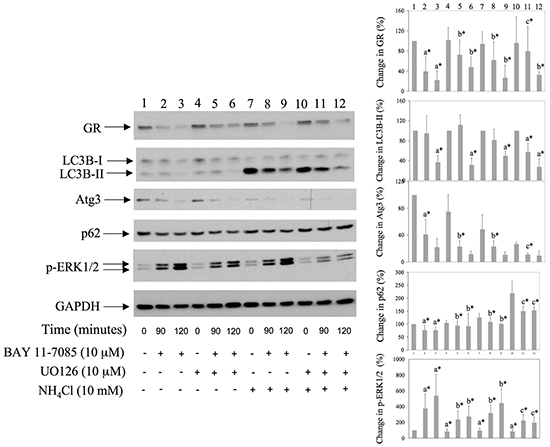 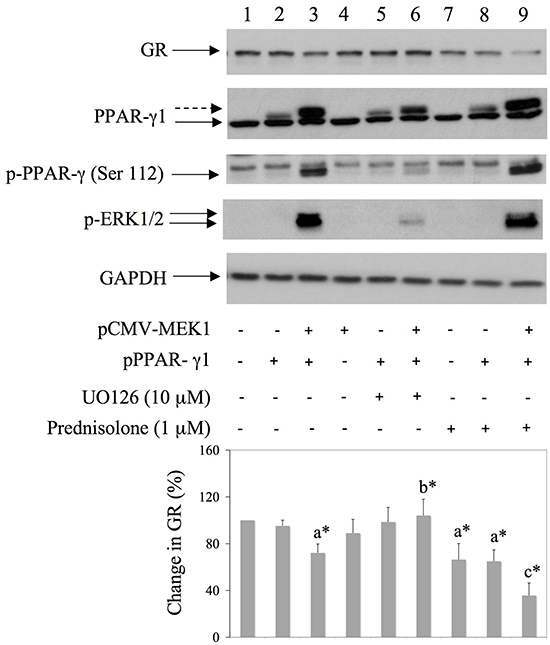 To test further the possible role of GR activation and down regulation in autophagy, we induced autophagy in human synovial fibroblasts by 5-60 minutes starvation (Figure 6). Results showed that, in parallel with autophagosomal marker LC3B-II, starvation also induced GR phosphorylation on Serine 211 as well as GR down regulation (Figure 6). These results further suggested the involvement of GR in synovial fibroblast autophagy. 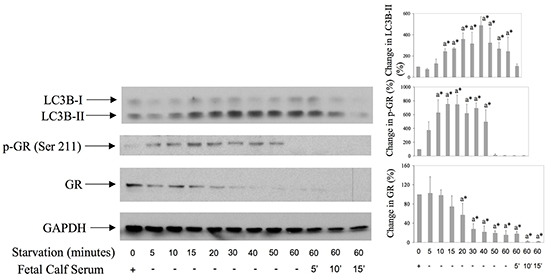 Figure 6: GR is both phosphorylated on Serine 211 and down regulated during starvation-induced autophagy in synovial fibroblsts. Cells were first starved by serum deprivation from the culture medium for 5-60 minutes, and then serum (10%) was replaced or not for additional 5-15 minutes. Western blots show expression of p-GR (Ser 211), GR, LC3B and GAPDH in synovial fibroblast cell extracts. Graphs represent average of protein expression from three different experiments done with synovial fibroblasts from three different OA patients, expressed as a percentage of control. a* statistically different from control cells.

In our experimental system 15d-PGJ2 efficiently protected synovial fibroblasts from BAY 11-7085- induced cell death in both MTS (a proliferation assay based on mitochondria activity) and Annexin V labelling (an apoptosis assay that measure phosphatidyl-serine externalization) assays. However, cell protection with both mifepristone and NH4Cl, although significant in both assays, was more efficient in MTS assay. These results suggest that inhibition of autophagy protected synovial fibroblasts more from BAY 11-7085-induced mitochondrial dysfunction and/or mitochondrial injury than from BAY 11-7085-induced apoptosis. We have detected autophagy markers earlier in the timing experiments then apoptosis markers, and inhibitor of autophagy partially prevented apoptosis. In mammary carcinoma cells, it has been shown that doxorubicin causes mitochondrial injury that precedes phosphatidyl-serine externalization [50]. Taken together, our results suggested that BAY 11-7085-induced autophagy and apoptosis in human synovial fibroblasts partially overlap, i.e. that apoptosis is partially the consequence of autophagy and that both autophagy and apoptosis are participating in BAY 11-7085-induced cell death. The difference between 15d-PGJ2 effect and NH4Cl and mifepristone effects may lay in the ability of 15d-PGJ2 that, in addition to autophagy inhibition, also inhibits apoptosis by another PPAR-γ signalling pathway. Thus, while NH4Cl and mifepristone are suggested to act through autophagy inhibition, PPAR-γ may be also one of the common regulators of both autophagy and apoptosis, as it was very recently proposed for Gadd45b (Growth arrest and DNA damage response 45b gene) [51].

Starvation was done by serum deprivation for 5-60 minutes.

pPPAR-γ1 [12], pCMV-MEK1 [17] (a kind gift from Dr Kun-Liang Guan, University of Michigan) and pEGFP (Clontech Laboratories Inc., Mountain View, CA) were over expressed in HEK293 cells. For transfection, 28 X 104 cells were seeded in 6 well plates (BD Biosciences), within 2ml of culturing medium. Cells contained in each well were transfected with 3 mg of DNA by the use of linear polyethylenimine (MW 25,000) (Polysciences, Inc., Warrington, PA).

p values were obtained using the Mann-Whitney test and Student’s t-test. A value of p < 0.05 was considered as statistically significant.

We would like to thank to Prof. Kun-Liang Guan, University of Michigan, for MEK1 containing plasmid pCMV-MEK1 and Raafat Stephan from GIGA-Research Flow Cytometry Platform for FACS analysis.

The authors declare that they have no conflicts of interest with the contents of this article.