PU.1 is a tumor suppressor for B cell malignancies

PU.1 is a critical transcription factor for differentiation of both myeloid and lymphoid cells. PU.1 knockout mice are embryonic lethal or die soon after birth, and those mice do not have granulocytes, monocytes/macrophages, or B cells [1, 2]. PU.1 is expressed in granulocytes, monocytes/macrophages, and B cells, but not in erythrocytes, megakaryocytes, or T cells. It was recently shown that PU.1 is an essential transcription factor for TH9 cell differentiation using a conditional mouse knockout model [3]. Collectively, these data show that PU.1 is essential for the differentiation of most hematopoietic lineages. In contrast, PU.1 expression in conditional knockout mice of a 14 kb upstream enhancer element (URE) of PU.1 gene reduced to 20% of wild type, and those mice developed acute myeloid leukemia (AML) and B-CLL-like disease [4]. These data show that PU.1 expression is tightly regulated in specific lineage cells and the decreased PU.1 expression results in various hematological malignancies. 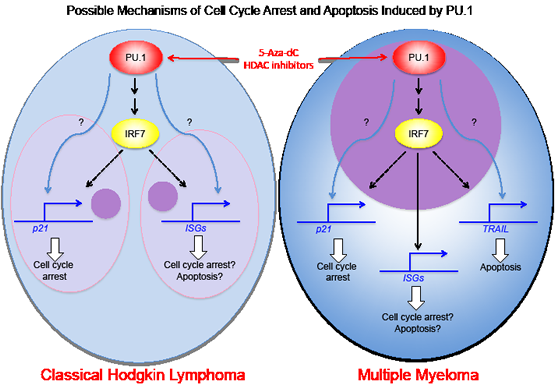