P53 is one of the most well-characterized proteins in cancer cell biology and is widely recognized as a tumor suppressor [1]. The functions of p53 include regulation of substrate metabolism, DNA repair, autophagy, cell senescence, angiogenesis, and oxidative stress [2]. Although most p53-dependent cellular processes are nuclear-based [3, 4], mitochondrial translocation of p53 has recently been detected raising the possibility of organelle-based effects [5, 6]. Mitochondrial translocation of p53 can suppress manganese superoxide dismutase (MnSOD), an antioxidant defense enzyme, and induce intracellular accumulation of reactive oxygen species (ROS) [7]. P53 can also activate several mitochondrial apoptosis-related proteinsF such as Bcl-xL to promote caspase activation and cytochrome C release [8]. 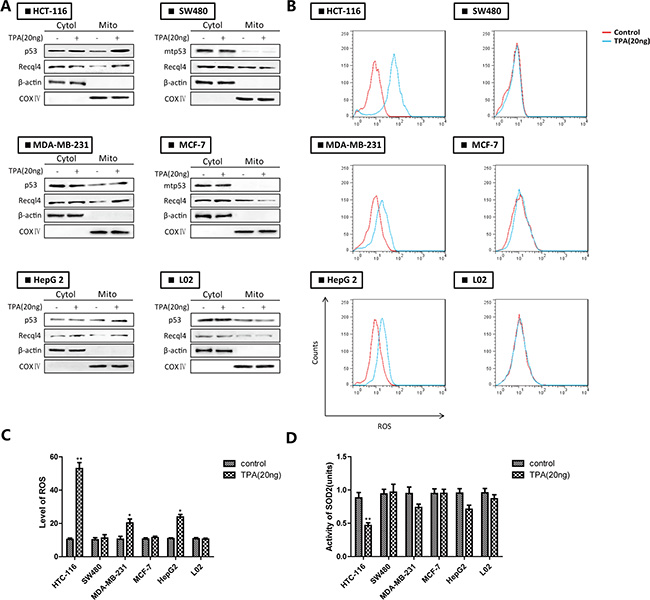 Figure 1: The accumulation of p53 in mitochondria leads to inhibition of SOD2 and increased ROS generation in wt-p53 cancer cells. (A) Western blotting analysis of mitochondrial p53. (B) ROS production was monitored using 10 μM DCFH-DA and detected by flow cytometry. (C) Quantification of ROS levels. (D) Evaluation of SOD2 activity. Bar, SD. *P < 0.05 or **P < 0.01 versus the untreated control. 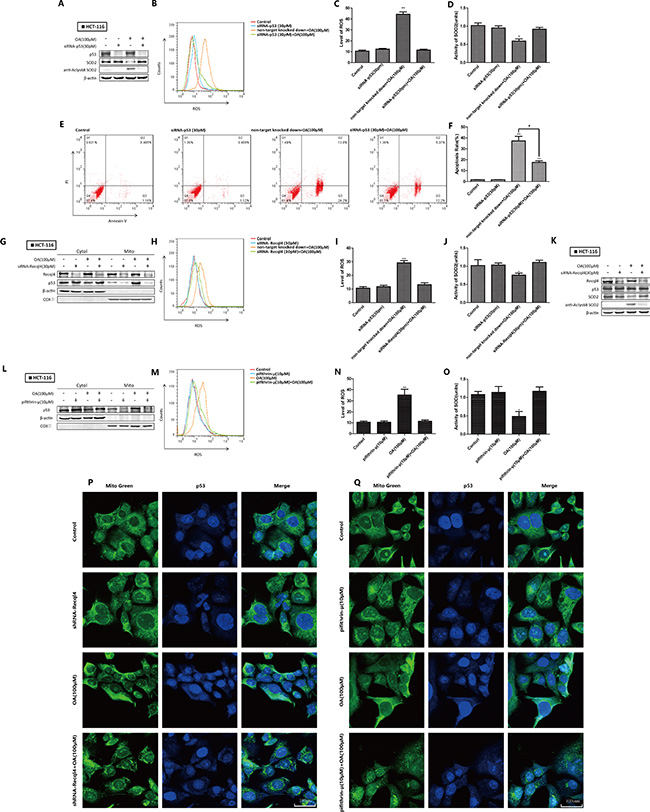 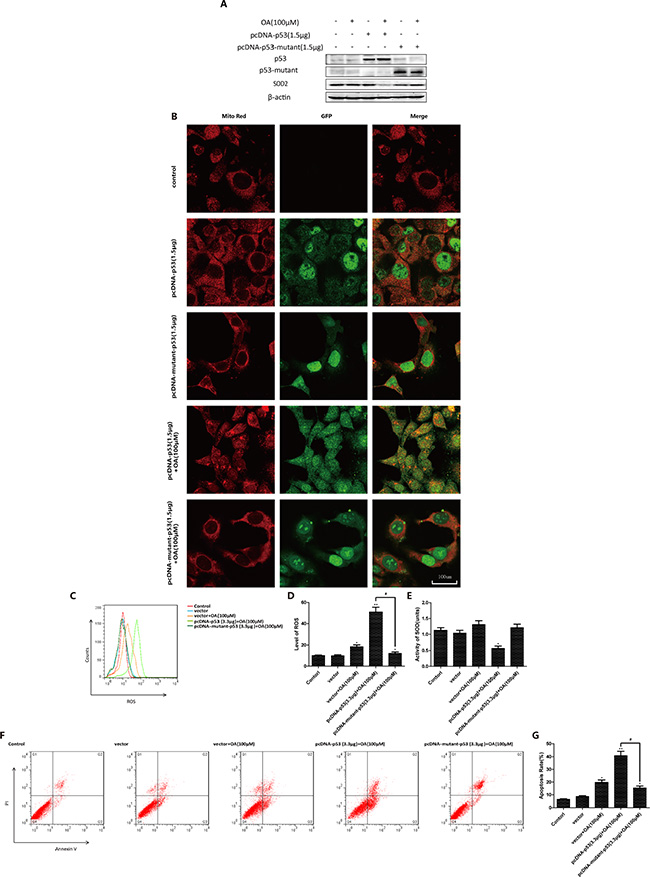 As shown in Figure 5A, mitochondrial translocation of the p53-Recql4 complex was observed in response to oroxylin A treatment. Previous studies have indicated that cytosolic p53 can be captured by Bcl-xL and sequestered into an inactive complex in unstressed cells [16]. Therefore, we investigated complex formation between p53 and Bcl-xL in HCT-116 cells using immunoprecipitation. The binding capacity of p53 and Bcl-xL increased in TPA-treated cells but decreased in oroxylin A-treated cells (Figure 5B–5C). Bcl-2 can interact with p53 and neutralize its proapoptotic effects on Bax and Bak, which oligomerize and form lipid pores in the outer mitochondrial membrane [16]. Mitochondrial Bcl-2 increased significantly in TPA-treated cells but decreased in oroxylin A-treated cells (Figure 5D). These results demonstrated that oroxylin A induced p53 cytosolic activation and mitochondrial translocation in the presence of Bcl-xL and Bcl-2. 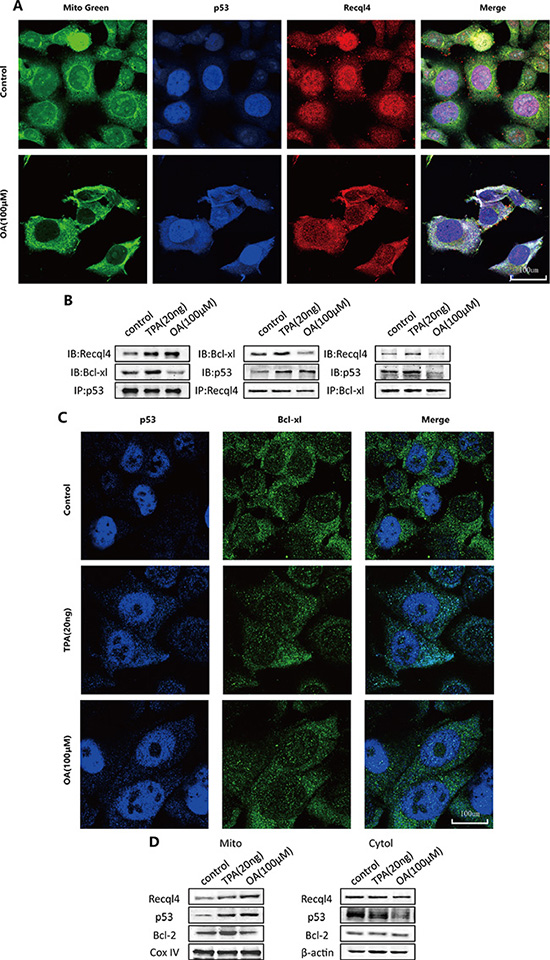 Oroxylin A induces mitochondrial translocation of p53 in vivo

To verify the oroxylin A-induced mitochondrial translocation of p53 in vivo, we used an HCT-116 transplanted tumor model established in BALB/C nude mice. We injected 100 mg/kg oroxylin A intraperitoneally and sections of human tumor tissue were obtained and analyzed by immunohistochemistry after 21 days. The results indicated that both the volumes and weights of the transplanted tumors decreased after oroxylin A treatment, while the weights of the nude mice did not change (Figure 6A–6D). The inhibitory rate of tumor growth in the oroxylin A-treated group reached 50.80%. Finally, wider distribution of p53 in the cytoplasm was observed by confocal microscopy compared to the control group (Figure 6E). 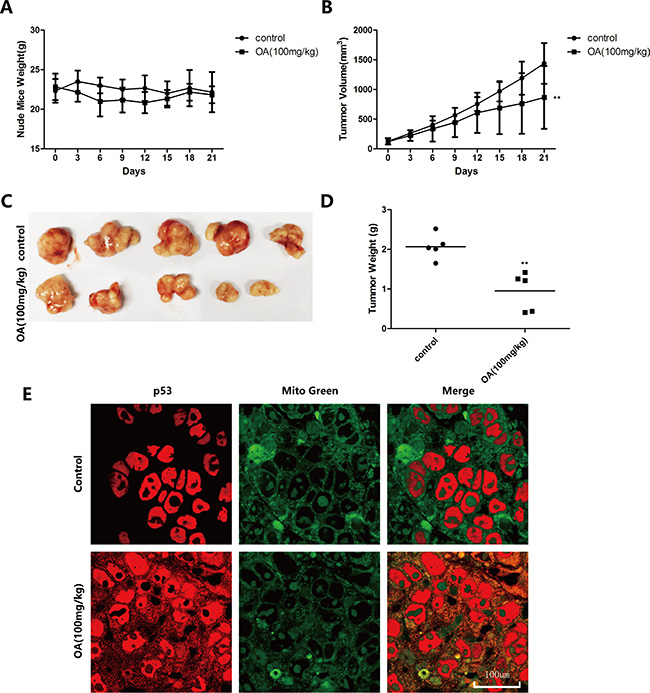 Figure 6: Oroxylin A induces Recql4-dependent mitochondrial translocation of p53 in vivo. (A–D) HCT-116 tumors were transplanted into BALB/C nude mice and 100 mg/kg of oroxylin A administrated by intraperitoneal injection. (E) Confocal images of the cells show the fluorescence of p53 in red, Mito in green, and the merged images in Column 3.

We achieved the same results in the absence of Recql4 and after treatment with an inhibitor of p53 mitochondrial translocation, indicating that p53 exerts its pro-apoptotic effects in the mitochondria rather than in the cytoplasm after oroxylin A treatment. These results were validated in p53-null HCT-116 cell model and p53-null Caco-2 cells (Supplementary Figure 1). Confocal microscopy revealed that wt-p53 was released from the nucleus. Thus, the first step of p53 translocation was confirmed in oroxylin A-treated cells. The other two essential elements for the process of p53 mitochondrial translocation are cytosolic transport and activation [25]. Dual fluorescence staining demonstrated p53 and Recql4 colocalization in mitochondria, indicating that transport was activated normally in response to oroxylin A. TPA has the ability to drive these two processes. However, it triggered invasion while oroxylin A induced apoptosis [26]. There might be some differences in p53 activation in oroxylin A-treated cells compared to TPA-treated cells. Cytosolic p53 activity can be captured and neutralized by cytosolic Bcl-xL through formation of an inactive complex [27]. After TPA treatment, complex formation between Bcl-xL-p53 and p53-Recq14 increased, indicating initiation of a protective mechanism. After oroxylin A treatment, binding of p53-Recq14 increased while Bcl-xL was liberated from the complex, allowing activated p53 to be transported. Finally, we verified oroxylin A-induced p53 translocation in vivo. As shown in Figure 5E, p53 exhibited a wider distribution in mitochondria.

Male athymic BALB/c nude mice (35–40 days old) with body weights ranging from 18–22 g were supplied by the Academy of Military Medical Sciences of the Chinese People’s Liberation Army (Certificate No. SCXK-[Army] 2007–004). Animals were maintained at 22 ± 2°C with 55–65% humidity in stainless steel cages under controlled light (12 h light/day) and were fed with standard laboratory food and water. Animal care was provided in accordance with the Guide for the Care and Use of Laboratory Animals published by the United State National Institute of Health.

Twenty nude mice were inoculated subcutaneously with 1 × 107 HCT-116 cells into the right axilla. After 12 days of growth, tumor size was measured using micrometer calipers. Mice that were inoculated with HCT-116 cells and had similar tumor volumes were randomly divided into the following two groups (five mice/group): saline control and oroxylin A (100 mg/kg intravenously every 2 days). Tumor size was measured every 3 days using micrometer calipers and tumor volume was calculated using the following formula: Tumor volume (mm3) = d2 × D/2, in which d and D were the shortest and the longest diameters, respectively. Mice were sacrificed on day 21 and tumor tissues analyzed by immunohistochemistry.

HCT-116 and CaCo-2 cells were seeded in 96-well plates, incubated overnight, and the treated with 100 μM oroxylin A. Alamar blue assays (Invitrogen) were then performed according to the manufacturer’s instructions. Fluorescence was analyzed once an hour for 9 h at an excitation wavelength of 530–560 nm and an emission wavelength of 590 nm using a fluorospectrophotometer (Olympus, Japan). The Alamar blue assay incorporates a fluorometric/colorimetric growth indicator based on detection of metabolic activity. Specifically, the system incorporates an oxidation-reduction indicator that both fluoresces and changes color in response to chemical reduction of the growth medium that results from cell growth.

Intracellular ROS was detected by DCFH-DA (Beyotime Institute of Biotechnology, Haimen, China). Cells were harvested from 6-well plates, washed with PBS, resuspended in serum-free medium, and then incubated with 10 μM DCFH-DA for 30 min at 37°C in the dark. The fluorescence intensity (488 nm excitation and 525 nm emission) was measured immediately using FACSCalibur flow cytometry (Becton Dickinson).

SOD2 activity was assayed using the Cu/Zn-SOD and Mn-SOD Assay Kit (KeyGen) using the manufacturer’s protocols. Briefly, cells were first collected and lysed, and then 3 mM potassium cyanide was added to the lysate to inhibit both Cu/Zn-SOD and extracellular SOD, which allowed detection of Mn-SOD activity. Samples were assayed in the absence of xanthine oxidase to generate a background sample. After the samples and SOD standards were prepared and added to a 96-well plate, the reaction was initiated by adding 20 μL of diluted xanthine oxidase to all wells. The plate was then incubated on a shaker for 30 min at room temperature. Optical density values were detected using a spectrophotometer (Thermo Fisher Scientific) at 450 nm.

SOD activity was quantified using the following equation obtained from the linear regression of the standard curve substituting the linearized rate (LR, LR = (Ablank1-Ablank2-Asample)/(Ablank1-Ablank2) × 100%) for each sample. One unit was defined as the amount of enzyme that exhibited 50% dismutation of the superoxide radical. Thus, SOD activity sample(U) = LR sample /(1-LR sample) units.

Transient transfection of plasmids and siRNA

The pcDNA3-p53-GFP and pcDNA3-p53-mutant-GFP plasmids were obtained from Addgene (Addgene 11770; Addgene 24859, Addgene Cambridge, MA, USA). The siRNAs for p53 and Recql4 were purchased from Santa Cruz Biotechnology. For transfection, HCT-116 cells were seeded in 6-well plates at 70% confluency, and then siRNA-p53 (30 pM)/siRNA-Recql4 (30 pM) were introduced into the cells using Lipofectamine 2000 (Invitrogen) according to the manufacturer’s instructions. P53 null HCT-116 cells and Caco-2 cells were incubated with pcDNA-p53-GFP/pcDNA-p53-mutant-GFP and transfected using the same method. The cells were then exposed to oroxylin A or vehicle and harvested for further analysis.

The Recql4 shRNA plasmid (TL309882) was obtained from Origene (Rockville, MA, USA). HEK293 cells were seeded at a density of 3 × 105 cells in 2 mL into one well of a 6-well plate. The cells were then transfected with the Recql4 shRNA plasmid using Lipofectamine 2000 (Invitrogen) according to the manufacturer’s recommendations Selection pressure was maintained by the presence of approximately 0.5–1.0 μg/mL puromycin. After the packaged cells reached approximately 70–80% confluency, the culture media was collected and passed through a 0.45 μm filter. The virus stock and 4 μg/mL polybrene in growth medium were then added directly to the target cells.

Cells were rinsed with PBS and fixed with 4% paraformaldehyde in phosphate buffer (pH 7.4) for 20 min at room temperature. After washing with PBST, the cells were blocked with 3% bovine serum albumin in PBST for 1 h, incubated with anti-p53 antibody/anti-Recql4 antibody (Santa Cruz Biotechnology) overnight at 4°C, and then washed with PBST. Tetramethylrhodamine-labeled anti-mouse/anti-rabbit IgG antibody (Rockland, Limerick, PA, USA) was then added and the cells incubated for 1 h. Mitochondria were identified by Mito Red (KeyGen) according to the manufacturer’s instructions. Finally, the cells were rinsed with PBST and exposed to DAPI for 15 min to stain the nuclei. After washing with PBS, the cells were examined under a laser scanning confocal microscope FV10-ASW [Ver 2.1] (Olympus Corp, MPE FV1000) for co-localization analysis.

Tissue sections (4 mm thick) were dewaxed and rehydrated through graded washes of alcohol in distilled water (100, 95, 85, 75%). The sections were then boiled in citrate buffer at 98°C for antigen retrieval and treated with 3% hydrogen peroxide to block endogenous peroxidase activity. Finally, the sections were incubated with a protein-blocking agent (kit 9710 MAIXIN, Maixin-Bio Co., Fuzhou, Fujian) prior to the application of the primary antibody. Slides were incubated with the anti-p53 antibody (Santa Cruz Biotechnology) overnight at 4°C and then washed with PBST. Mitochondria were identified using Mito Red (KeyGen) according to the manufacturer’s protocol. After washing with PBS, tissues were examined under a laser scanning confocal microscope FV10-ASW [Ver 2.1] (Olympus Corp, MPE FV1000).

Recaql4, Bcl-xL, and p53 were immunoprecipitated from the total protein using polyclonal antibodies crosslinked to protein G-agarose beads (Santa Cruz Biotechnology). The immune complexes were analyzed by Western blotting and probed with antibodies against Bcl-xL, p53 of interest.

Preparation of mitochondria- and cytosol-enriched extracts

Following the 48 h incubation of the cells with oroxylin A, mitochondria/cytosolic fractionation was then performed using the Mitochondria/Cytosol Fractionation Kit (BioViso, VA, USA) according to the manufacturer’s protocol.