Recently, the conserved intracellular digestion mechanism ‘autophagy’ has been considered to be involved in early tumorigenesis and its blockade proposed as an alternative treatment approach. However, there is an ongoing debate about whether blocking autophagy has positive or negative effects in tumor cells. Since there is only poor data about the clinico-pathological relevance of autophagy in gliomas in vivo, we first established a cell culture based platform for the in vivo detection of the autophago-lysosomal components. We then investigated key autophagosomal (LC3B, p62, BAG3, Beclin1) and lysosomal (CTSB, LAMP2) molecules in 350 gliomas using immunohistochemistry, immunofluorescence, immunoblotting and qPCR. Autophagy was induced pharmacologically or by altering oxygen and nutrient levels. Our results show that autophagy is enhanced in astrocytomas as compared to normal CNS tissue, but largely independent from the WHO grade and patient survival. A strong upregulation of LC3B, p62, LAMP2 and CTSB was detected in perinecrotic areas in glioblastomas suggesting micro-environmental changes as a driver of autophagy induction in gliomas. Furthermore, glucose restriction induced autophagy in a concentration-dependent manner while hypoxia or amino acid starvation had considerably lesser effects. Apoptosis and autophagy were separately induced in glioma cells both in vitro and in vivo. In conclusion, our findings indicate that autophagy in gliomas is rather driven by micro-environmental changes than by primary glioma-intrinsic features thus challenging the concept of exploitation of the autophago-lysosomal network (ALN) as a treatment approach in gliomas.

Glioblastoma (GBM) WHO grade IV is the most common primary brain tumor exhibiting mean overall survival of approximately 12 months despite aggressive treatment [1–3]. GBM often harbor TP53 mutations leading to impaired apoptosis [4, 5] or alterations of the AKT/mTOR pathway as a consequence of PTEN mutation [6]. Autophagy is suppressed by the AKT/mTOR pathway activation constituting a highly conserved digestion mechanism for protein aggregates and dysfunctional organelles to regain energy by recycling amino acids in malnutritive conditions like starvation or hypoxia [7, 8]. Autophagy is also considered a cancer-promoting mechanism conferring therapy- and starvation-resistance to tumor cells including gliomas [9, 10, 11, 12]. Previously, autophagy was proposed as an alternative cell death mechanism (type-II cell death) to apoptosis (cell death type I) [13]. There is an ongoing controversial discussion on whether the inhibition or the induction of autophagy could be exploited as a new anti-cancer treatment and how autophagy-targeting drugs might be applied within the standard radio-chemotherapeutic therapy regimens in cancer patients [14]. Even though there are already ongoing phase I/II clinical trials investigating autophagy-targeting drugs in glioma patients [15], the definite role of autophagy and the question whether autophagy is a promising adjuvant therapeutic target in gliomas remains unclear. A major problem in monitoring autophagy is that alterations of the markers LC3B and p62 can result from either autophagy induction or blockade of the autophagic flux [16]. To elucidate this cellular digestion process in gliomas in vivo, we established a cell culture based platform for the morphological on-slide detection of autophagy. Previously, autophagy activation was almost exclusively assessed by LC3B-I to -II conversion in immunoblotting [17]. We analyzed 350 astrocytomas for autophagy-associated markers LC3B, p62, BAG3, Beclin1 and the lysosomal markers LAMP2 and Cathepsin B (CTSB) to investigate whether also the lysosomal machinery is altered. We aimed at defining the patterns of autophagy induction in human astrocytomas WHO grade I to IV and to re-assess autophagy and its clinico-pathological relevance in glioma biology. This data should contribute to a better understanding of the autophago-lysosomal system in gliomas and provide a reference point for following studies discussing autophagy as a tumor promoting or suppressing mechanism and potential glioma therapy target.

Methodological platform to monitor the autophago-lysosomal network in vivo 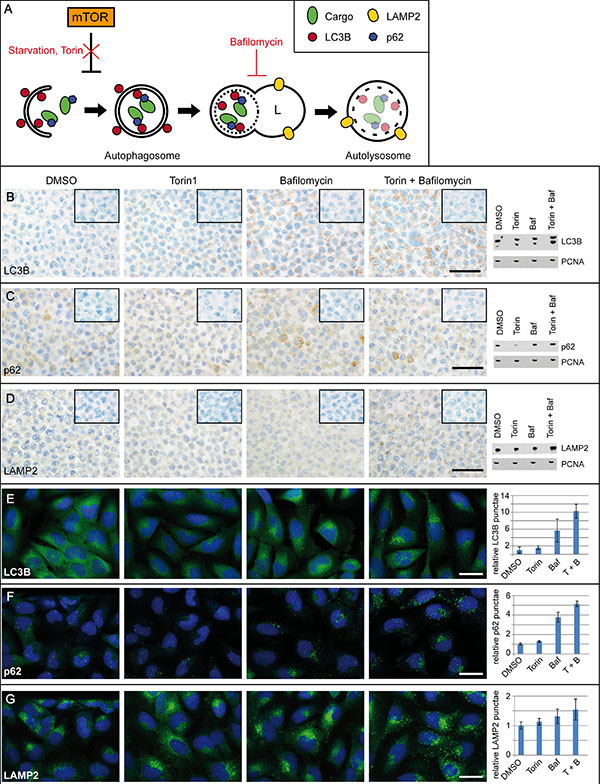 Figure 1: Platform for the immunocytochemical analyses of key autophago-lysosomal markers. (A) Schematic overview of the autophago-lysosomal pathway including modulators of the induction of autophagy as well as inhibitors of the autophagic flux used in Figure 1B–1G. (B–D) Immunohistochemistry with antibodies against (B) LC3B, (C) p62 and (D) LAMP2 in LNT-229 glioma cells treated with DMSO as control condition, the activators of autophagosome formation Torin1 (250 nM) or BafA1 (100 nM) as well as the combination of both Torin1 and BafA1 (treatment time 2 h in each condition). Negative controls of the immunocytochemical stainings are shown in the right upper corner of each picture. Scale bars: 50 μm. Corresponding immunoblots were performed from each treatment condition. (E–G) LNT-229 glioma cells were treated with Torin1 (2 h, 250 nM) and/or BafA1 (2 h, 100 nM), fixed and labeled with (E) anti-LC3B, (F) anti-p62 or (G) anti-LAMP2 antibodies, respectively. DRAQ5 was used to stain nuclei. Scale bars: 10 μm. Images were acquired with Opera High Content Screening System and antibody-labeled spots were automatically counted using Acapella software. Data represent mean of quadruplicates ± standard deviation, normalized to DMSO control. 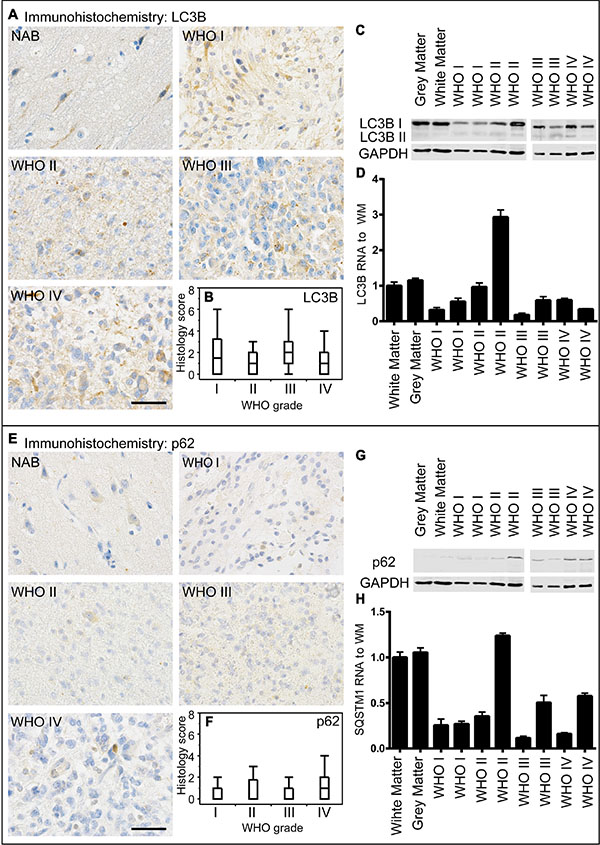 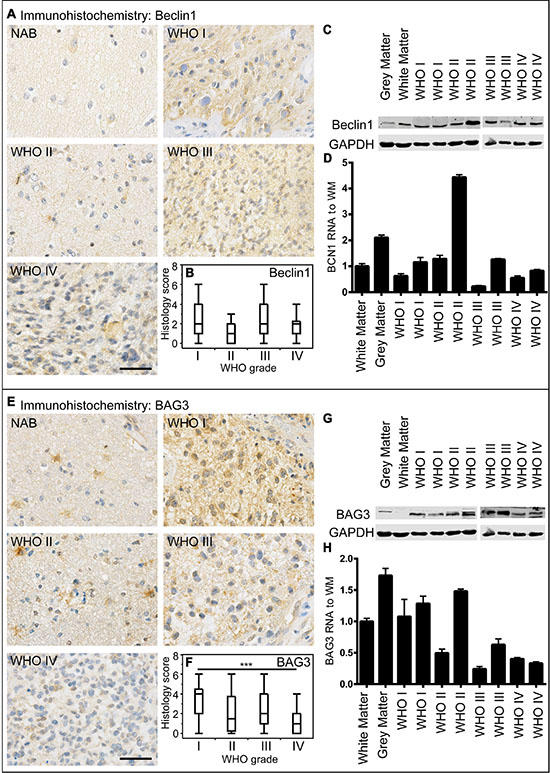 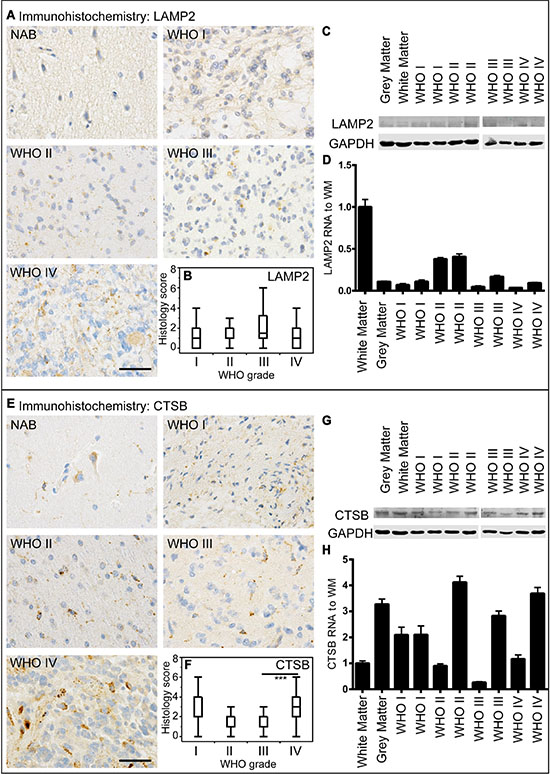 LC3B, p62, LAMP2 and CTSB are loco-regionally upregulated in glioblastomas in oxygen- and nutrient-deprived areas

Since, in general, no considerable differences were detected in ALP activation, we investigated tumor areas with prominent activation of the ALP in more detail. Highest LC3B (Figure 5A, 5A*), p62 (Figure 5B, 5B*), LAMP2 (Figure 5C, 5C*) and CTSB (Figure 5D, 5D*) levels were seen in close vicinity of pseudopalisading necrosis in human glioblastomas, frequently decreasing within a 100–500 μm distance from the border of the pseudopalisading cells. This could indicate a secondary, oxygen- and/or nutrient-dependent upregulation of these proteins rather than an a priori tumor phenotype. Double immunofluorescent stainings deciphered GFAP-positive glioma cells as major source of LC3B punctae formation next to necrotic foci (Figure 5E), whereas Iba1-positive microglia/glioma-associated macrophages were mainly devoid of LC3B expression (Figure 5F). To address the question if LC3B is associated with glioma cells suffering from hypoxia and glucose deprivation, we used the glucose transporter Glut1 as a reliable sensor for both conditions [19]. The strong co-localization of LC3B with Glut1 (Figure 5G) presumably indicates that the detection of LC3B in GBM in vivo is mainly related to a cellular state of hypoxia and malnutrition. Cells undergoing apoptosis as indicated by cleaved caspase 3 (cCasp3) staining did not overlap with cells that displayed strong LC3B punctae formation (Figure 5H). Similar co-localization results were obtained for the autophagic cargo receptor and adapter protein p62 (Supplementary Figure S9). Between the cell layers with prominent ALP activation and necrotic foci, prominent levels of cleaved caspase 3 (cCasp3), an indicator of apoptosis, were detectable (Figure 5I, 5I*). The distinct distribution pattern of activated ALP and apoptotic pathways related to hypoxia and malnutrition are schematically summarized in Figure 5J. 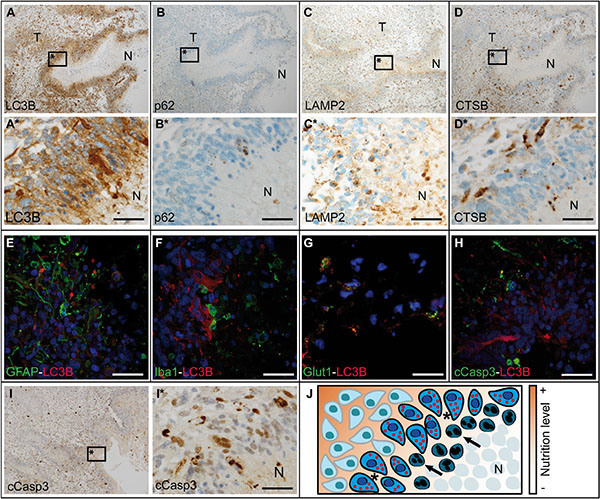 Apoptosis and autophagy are independently induced in glioma cells

There is an ongoing discussion about whether autophagy is induced in glioblastoma cells to promote survival and escape malnutrition or if it might also exert primarily alternative cell-death (type-II cell death) functions. By producing large tumor spheres from primary glioblastoma cells, we mimicked malnutrition and decreasing oxygen levels found in in-vivo in gliomas. The highest frequency of LC3B-positive punctae was detected in the center of primary glioma spheres reaching a diameter of up to 500 μm, whereas the sphere borders with direct contact to cell culture medium were almost completely devoid of LC3B (Figure 7A). The weakest p62 expression was also seen at the sphere surface, however central p62-positivity showed a slightly inverse gradient as compared to LC3B with lower expression levels in the most inner areas (Figure 7B). In contrast, the distribution of cCasp3-positive cells was more heterogeneous, with a trend towards the center of glioma spheres. In our cytopellet micro array analysis LC3B punctae formation, but not p62 expression positively correlated with cCasp3 (Figure 7D, 7E), while LC3B and p62 correlated positively (Figure 7F). This suggests that apoptotic cell death and autophagy induction in glioma cells are largely independent from each other. To further analyze in more detail if proteins of the ALP are activated simultaneously or independently from (apoptotic) cell death induction in general, we induced autophagy in LNT-229 glioma cells to observe whether apoptosis is activated or vice versa (Figure 7G). Induction of autophagy by Torin2 showed the expected LC3B-I to -II conversion but no caspase 3 cleavage as an indicator of apoptosis in immunoblotting analysis. Treating LNT-229 with TRAIL, a specific apoptosis inductor led to increased caspase cleavage - as expected - but not to LC3B-I to -II conversion. The proteasome inhibitor Epoxomicin served as enhancer of TRAIL (Figure 7G). These results corroborate the independent regulation of autophagy and apoptosis in glioma cells. 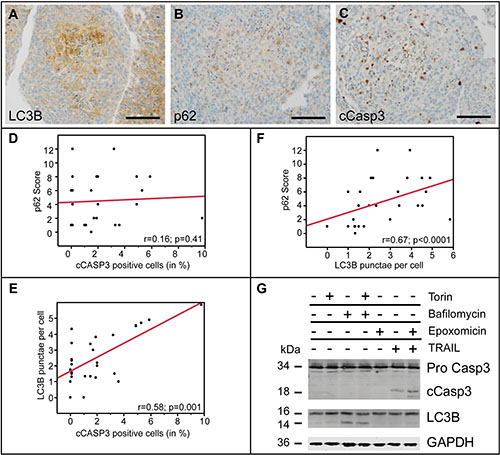 In summary, our study provides a reliable platform for the assessment of ALP activation in vivo in human tissue specimens at the cellular level. The central ALP axis including p62-LC3B-CTSB-LAMP2 was generally activated in a similar manner while Beclin1 levels, an alternative inducer of autophagy, did not considerbly differ upon ALP induction in human gliomas. Furthermore, the non-canonical ALP stimulator BAG3 was mainly restricted to areas showing reactive gliosis in both normal appearing brain tissue as well as glioma tissues. We could also demonstrate that ALP activation locates to peri-necrotic, glucose-restricted areas in GBM. When taking the whole tumor section into account, no considerable association with patient outcome or grade of malignancy was detectable. In conclusion, our data may at least partly explain why first clinical phase I/II studies in glioblastomas showed rather disappointing results [15] with regard to both the specific success of autophagy inhibition and in general the impact on patient survival. Our findings further highlight a strong impact of the glioma microenvironment on the extent of ALP activation in these tumors.

We investigated 350 brain tumor samples collected at the University Hospital Frankfurt am Main, Germany. Our cohort comprised pilocytic astrocytomas WHO grade I (n = 47), diffuse astrocytomas WHO grade II (n = 16), anaplastic astrocytomas WHO grade III (n = 35) and glioblastomas WHO grade IV (n = 252) (for summary see Table 1). Normal appearing CNS tissue specimens remote to the tumor core and autopsy cases without clinical or neuropathological evidence for CNS pathologies were used as controls. The use of patient material was approved by the ethical committee of the Goethe University Frankfurt, Germany (GS 04/09 and SNO-06-2014). Neuropathological diagnostics was performed by at least 2 experienced neuropathologists (KHP, PNH, MM) according to the current WHO classification for tumors of the central nervous system [40]. Immunohistochemical analyses of patients material was performed on tissue micro arrays as previously published [41].

As the human malignant glioma cell line LN-229 is p53 wild-type which is in contrast to was has been previously published, the cells used in our experiments were renamed LNT-229 for clarification (T stands for Tuebingen) [42]. In addition, we used cell lines (MZ-18, T98G and U87) with different p53 status to show a potential association of this mutation with ALN factors. Cells were cultured in 75 cm² cellstar plastic flasks using Dulbeccos’s modified Eagle’s medium (DMEM) supplemented with 25 mM Glucose, 1% glutamine (Gibco DMEM Glutamax, Invitrogen, Carlsbad, CA, USA), 10% FCS (Biochrom, Berlin, Germany), penicillin/streptomycin (each 100 μg/ml, Sigma, Deisenhofen, Germany) and 1 mM pyruvate (Sigma). Cell culture supplements such as glutamine or pyruvate content were adapted to the appropriate experiment.

Cytopellets were generated by centrifuging the cells or spheres after treatment at 350 g for 3 min. Supernatants were discarded and pellets fixed in 4% buffered formalin (pH 7.4) for 48 hours and afterwards embedded in paraffin.

In order to assess the immunohistochemical stainings, a semi-quantitative score was applied taking into account both staining frequency and intensity. The staining frequency scores 0 (0–1%), 1 (1–10%), 2 (10–25%), 3 (25–50%) and 4 (> 50%) were multiplied with the intensity scores, the latter ranging from weak (1) over moderate (2) to strong (3) as previously described [43]. Tissue sections and cytopellets were analysed using an Olympus BX50 light microscope (Olympus, Hamburg, Germany).

Pharmacologic regulation of autophagy and apoptosis

There are no conflicts of interest influencing this study.