Exploration of the recurrence in radiation brain necrosis after bevacizumab discontinuation

This study was approved and completed with oversight by the Ethics Committee of Tianjin Tumor Hospital. The study complied with all ethics regulations. All patients signed an informed consent form. The inclusion criteria were primary or metastatic brain lesions; a history of CyberKnife stereotactic radiotherapy for brain lesions; and radiation brain necrosis confirmed by imaging or pathology. We studied 14 patients with radiation brain necrosis after stereotactic radiotherapy for a primary or metastatic brain tumor and who received bevacizumab treatment from June 2011 and December 2014. The patients included 6 males and 8 females, 31-70 years old (median: 53 years old).None of the cases presented a primary brain tumor, but the 14 cases presented metastatic brain tumors (11 cases of brain metastasis from lung cancer, 1 case of brain metastasis from breast cancer, 1 case of brain metastasis from gastric cancer and 1 case of brain metastasis from lymphoma).Four patients had previously undergone whole-brain radiotherapy. The stereotactic radiotherapy was provided as follows:50-82% of the dose limit (median:75%),1,400-4,000cGy(median:2,600cGy), and bioequivalent dose of 5,980-9,880cGy(median:7,590cGy) provided in 1-5 treatments (median: 2 treatments).The patients received 3-10 bevacizumab treatment cycles (median:3cycles) (Table 1).

Table 1: Base line of patients

A pathological diagnosis remains the gold standard for diagnosing radiation brain necrosis; however, many issues arise in clinical practice. First, with stereotactic radiotherapy, many brain tumors are close to the base of the skull or in important functional areas, which eliminates surgical resection as well as stereotactic biopsy and, thus, a potential pathological diagnosis. Second, few patients are willing to undergo a biopsy after stereotactic radiotherapy. Third, a stereotactic biopsy may not provide a full pathological picture of the tumor tissue. Moreover, it is difficult to ask patients with multiple intracranial metastases and who receive palliative treatment to undergo a craniotomy to confirm a diagnosis if brain necrosis is suspected. And in such patients, a craniotomy is inconsistent with the treatment goal of prolonging survival and improving quality of life. Hence, although a post-operative pathological diagnosis is the gold standard for diagnosing radiation brain necrosis, it is difficult to implement in clinical practice. Thus, a comprehensive imaging modality is the most practical and common diagnostic method for radiation brain necrosis in clinical practice [12]. In this study, the patients were diagnosed based on a comprehensive medical history, symptoms, signs, MRI, spectroscopy and positron emission tomography-computed tomography (PET-CT) [13-20]. MRI or spectroscopy was performed first, and then, PET-CT was performed as needed for ambivalent diagnoses. Moreover, the tests were repeated to monitor for changes. Most brain necrosis cases exhibited irregular low T1WI and irregular high T2WIsignals in the MRI scans. Brain necrosis manifested as low T1WIand high T2WI signals. For the enhanced scans, the lesion center showed irregular enhancement without enhanced nodules. Further, the T1 and T2 signals indicated a large edema area surrounding the lesion with no enhancement. MRS showed low Cho, Cr and NAA levels as well as markedly lower NAA/Cho and NAA/Cr ratios in the radiation brain necrosis lesions. PET showed a lower metabolic rate in the radiation brain necrosis lesions than in the normal brain tissue and a lower glucose uptake rate in the corresponding lesion area. An imaging-based brain necrosis diagnosis must be confirmed by radiologists.

A routine brain MRI scan was performed one month after 3 cycles of bevacizumab treatment, which was followed by scans every 2-3months during the next year and then as needed based on the patient’s condition, but the interval did not exceed six months. Moreover, an MRI scan was promptly performed where the patient presented intracranial symptoms.T1-weighted signal changes in the brain necrosis area of an enhanced MRI scan were used to evaluate the treatment results and brain necrosis recurrence. Three areas from the enhanced brain necrosis area were used to measure the signal intensity and calculate the mean value, which was then compared with the white matter signal intensity for the same MRI scan to eliminate the effects from the enhancement. The adjusted value was then used to measure the signal intensity changes for the brain necrosis area before and after treatment [21]. 5. Statistical analysis

SPSS17.0 software was used for statistical analyses. P < 0.05 was considered statistically significant. A t test was performed to analyze the brain MRIsignal intensity changes before and after the first course of bevacizumab treatment. A rank sum test was performed to analyze difference factors in patients with and without brain necrosis recurrence. Logistic regression analysis was used to analyze the factors related to brain necrosis recurrence after bevacizumab treatment.

Table 2: The effect of bevacizumab and the characters of patients’ recurrence after bevacizumab discontinuation

a: The increase or decrease of enhanced MRI signal was used to evaluate the remission and relapse of radiation necrosis.

Table 3: The rank sum test results of related factors in recurrence and no recurrence patients

Table 4: The logistics regression analysis of the factors associated with brain necrosis recurrence

Data for 1 patient was used to further develop an in-depth understanding of radiation brain necrosis recurrence following bevacizumab discontinuation. A 58-year-old male patient visited the hospital due to cerebellar metastasis of lung cancer and underwent CyberKnife stereotactic radiotherapy (dose: 23 Gy/1f) for brain metastasis in June 2011.A follow-up visit in October 2011 showed a significantly smaller cerebellar lesion. However, a follow-up visit in August 2012showed significant enhancement at the original treatment site with a large edema area in the surrounding tissue. The patient was diagnosed with radiation brain necrosis based on imaging. In 2012, the patient received bevacizumab at 5 mg/kg, q3w× 3cycles.A brain MRI scan performed in October 2012 showed significant improvement in the radiation brain necrosis (nearly disappeared).However, a brain MRI scan performed in April 2013 showed a large area with enhancement and edema at the original treatment site, and a postoperative pathological examination confirmed radiation brain necrosis (Figure 1). 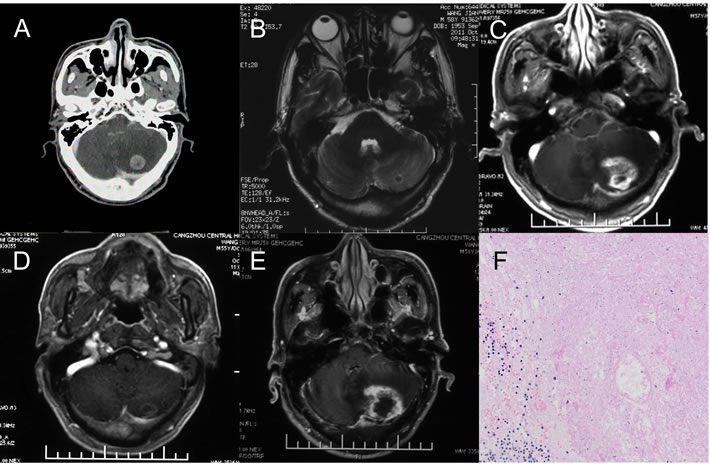