Intensity-modulated radiation therapy (IMRT) provides the protection of the normal organs and a precise treatment plan through its optimization process. However, the final dose-volume histogram (DVH) obtained by this technique differs from the optimal DVH, owing to optimization convergence errors. Herein, intermediate dose calculation was applied to IMRT plans during the optimization process to solve these issues.

Homogeneous and heterogeneous targets were delineated on a virtual phantom, and the final DVH for the target volume was assessed on the target coverage. The IMRT plans of 30 patients were established to evaluate the usefulness of intermediate dose calculation.

In conclusion, intermediate dose calculation in IMRT plans improves the target coverage in the target volume around heterogeneous materials. Moreover, the optimization time can be reduced.

The development of intensity-modulated radiation therapy (IMRT) has led to significant improvements in dose conformity; however, this technique increases the time needed for the dose calculation and plan optimization. On the contrary, volumetric modulated arc therapy (VMAT) technique developed by Otto reduces the beam delivery time and inter-fractional error by using fewer monitor units than IMRT [1], moreover, VMAT technique improves the target coverage and reduces systematic error in normal organ [2]. Recent progress made in treatment planning technology has led to improvements in the treatment efficiency, as well as to reduced side effects. However, in the radiation treatment planning process, the final dose-volume histogram (DVH) acquired by IMRT or VMAT differs from the optimal DVH obtained via the optimization process. This is caused by inherent errors in the dose calculation algorithm, such as dose calculation for lateral scatter or buildup region errors due to modeling modulator transmission. This issue arises from optimization convergence error, especially in cases of tissue heterogeneity [3, 4].

In recent years, several studies have been conducted on the optimization of convergence error. In one previous study, an improved final DVH was achieved by using the base dose that was acquired from the initial plan to solve the optimization convergence error [5]. Meanwhile, innovative method, named intermediate dose calculation, has been previously applied to the VMAT technique with the jaw tracking option in Progressive resolution optimizer (PRO3) algorithm [6], it was applied to IMRT plans in Eclipse version 11 (Varian Medical Systems, Palo Alto, CA) for the first time in 2009 by Zacarias and Mills [4].

This study aimed to investigate the dosimetric impact of intermediate dose calculation by DVHs, and we moreover briefly examine the dosimetric differences between AAA and AXB algorithms.

Table 1: Comparisons of the target coverage in each phantom 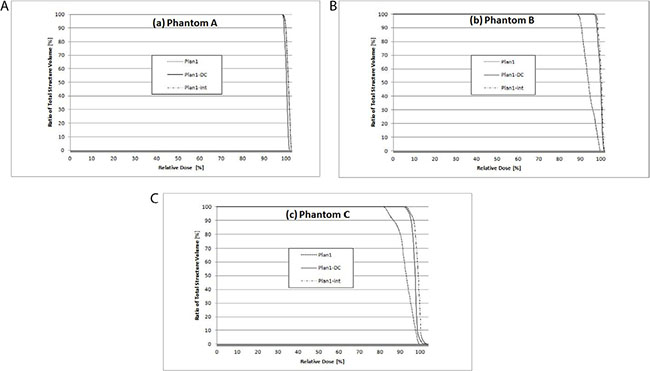 Figure 2 shows DVHs of example cases in each treatment region. The dose distributions were calculated by AAA and AXB algorithms. The target coverage was analyzed by DVHs for 30 cancer cases and evaluated by the mean value and standard deviation of CI, HI and UI which are measured on treatment planning system.

All results calculated by AAA are summarized in Table 2. As a result, in the case of HN, no clinical difference was found. On the other hand, significant clinical differences were observed for the HI (p = 0.043) and UI (p = 0.043) between Plan1 and Plan1-int in brain cancer cases, and for HI (p = 0.042) between Plan1 and Plan1-DC and UI (p = 0.043) between Plan1 and Plan1-int in prostate cancer cases. Table 3 shows the results obtained by AXB. This result showed a similar tendency to those obtained by AAA. In the case of lung cancer, considerable differences in both AAA and AXB algorithms were observed for the target coverage upon intermediate dose calculation, indicating that DVH can be achieved accurately by intermediate dose calculation for the treatment target around heterogeneous material.

Table 2: Summary of each parameter measured by AAA for each region

Table 3: Summary of each parameter measured by AXB algorithm for each region 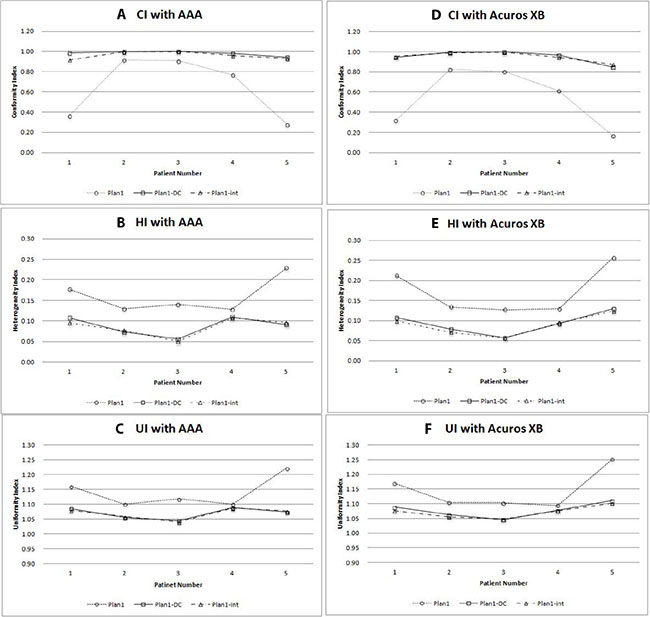 A minor relative difference was observed between AAA and AXB algorithms, indicating that the target coverage was lower in AXB plans than in AAA. In Plan1, significant differences between AAA and AXB algorithms for D98%, D2%, and Dmean were observed, whereas these significant differences were reduced between Plan1-DC and Plan1-int. These results were similar to the values observed in the other regions (Table 5).

Treatment plans using IMRT and VMAT techniques are associated with a precise target volume and minimized side effects due to enhanced protection of the normal organ. However, many trials are currently required to achieve an effective treatment plan during the optimization process, and this is associated with a high rate of error.

Figure 5: Axial views of the central slice for (a) Phantom A (homogeneous material), (b) Phantom B (small air cavity), and (c) Phantom C (air cavity around the target).

where TV is the target volume and TV95% is the volume covered by 95% of the prescribed dose;

In head and neck (HN) and brain cancer cases, the treatment target volume is complex, and critical normal organs such as the parotid grand, optic apparatus, and spinal cord are adjacent to the target volume. Therefore, a sharp dose response curve and precise dose calculation are required. In a previous study, IMRT technique showed excellent results for these cases in comparison with three-dimensional conformal radiation therapy [15, 16]. In addition, IMRT technique has also been applied to the treatment plan in order to improve the treatment toxicity and the disease-free survival in prostate cancer cases [17, 18], while, in lung cancer cases, side effects such as pneumonia can be reduced by protecting the healthy lung, esophagus, heart, and spinal cord using this technique [19]. Thus, using IMRT technique in the treatment plan can also improve the dose escalation for these treatment regions.

In this study, CT scans of 30 patients were randomly chosen to assess the dosimetric impact of intermediate dose calculation. The treatment regions of these patients were in the HN (n = 15), brain (n = 5), prostate (n = 5), and lung (n = 5). The images were obtained with 2.5 mm slice thickness from 3D-computed tomography (GE Health-care, Buckinghamshire, UK). Three kinds of treatment plans were generated for each image, similar to in the phantom study. The same constraints and priorities in the optimization process were applied to the set of plans (Plan1, Plan1-DC, and Plan1-int). Dose calculation of these treatment plans was carried out by AAA and AXB algorithms.

To evaluate the dosimetric impact of intermediate dose calculation, the target coverage for IMRT plans was estimated by CI, HI, and UI through DVH. The dose distribution by AAA was compared with that by AXB for each treatment region. For the statistical analyses, the Statistical Program for Social Sciences (SPSS version 18; SPSS Inc., Chicago, IL) was used.

We are thankful to our colleagues who provided expertise that greatly assisted the research.

18. Edlund T, Zimmer JR, Gannett DE. IMRT for the treatment of prostate cancer: a comparison of a forward-planned technique and an inverse-planned technique utilizing a dose gradient method. Medical dosimetry. 2004; 29:128–133.