AMP-activated protein kinase (AMPK) is an important energy sensor that may inhibit cell proliferation or promote cell survival during stresses. Besides cyclooxygenase, AMPK is another target of the nonsteroid anti-inflammatory agent aspirin. Preclinical and clinical investigations demonstrate that aspirin can inhibit several types of cancer such as colorectal adenomas and hepatocellular carcinoma (HCC). However, little is known about the cellular response to aspirin that may lead to aspirin resistance. Here, we show that aspirin induces the expression of MCL-1 in HepG2 and SW480 cells through AMPK-mTOR-Akt/ERK axis. Treatment of HepG2 and SW480 cells with aspirin leads to increased MCL-1 expression, Akt and ERK1/2 phosphorylation. Inhibition of Akt/MEK abrogates the induction of MCL-1 by aspirin. Aspirin activates AMPK, which in turn up-regulates mTORC2 activity, Akt, ERK1/2 phosphorylation and MCL-1 expression. MCL-1 knockdown sensitizes cancer cells to aspirin-induced apoptosis. Combination of aspirin and AMPK, Akt or MEK inhibitor results in more significant inhibition of cell proliferation and induction of apoptosis than single agent. Moreover, sorafenib blocks aspirin-induced MCL-1 up-regulation. Combination of aspirin and sorafenib leads to much more cell death and less cell proliferation than each drug alone. Treatment of HCC and colon cancer xenografts with both aspirin and sorafenib results in more significant tumor suppression than single agent. These data demonstrate that AMPK-mediated up-regulation of mTORC2 and MCL-1 may compromise the anticancer effects of aspirin. Combination of aspirin and sorafenib may be an effective regimen to treat HCC and colon cancer.

Aspirin is widely prescribed as a painkiller, antipyretic or antiplatelet agent for more than 100 years. The therapeutic effects of aspirin are mediated by its metabolite salicyclic acid. Long-term follow-up study in several trials demonstrates that the nonsteroid anti-inflammatory agent aspirin prevents colorectal adenomas, hepatocellular carcinoma (HCC), melanoma, breast and prostate cancers, and reduces cancer mortality, indicating a promising role of aspirin for cancer prevention [1–3]. In addition to epidemiological studies, preclinical data demonstrate that aspirin may inhibit several types of cancer [4, 5]. However, one study indicates that regular use of aspirin after diagnosis only has beneficial effects among patients with mutated-PIK3CA (phosphatidylinositol-4, 5-bisphosphonate 3-kinase, catalytic subunit alpha) colorectal cancer, but not among patients with wild-type PIK3CA cancer [6]. One mechanism underlying the prevention and inhibition of cancer may be the inhibition of cyclooxygenase (COX) enzymes and reduced production of prostaglandins and other inflammatory mediators [7].

Besides COX, salicyclic acid may target other proteins. Recent studies demonstrate that aspirin may activate AMP-activated protein kinase (AMPK), an important energy sensor in cells [8, 9]. Upon metabolic stress and energy imbalance that lower the intracellular levels of ATP, AMPK is activated to regulate many downstream targets. Activation of AMPK may shape cellular signaling pathways that are involved in tumorigenesis, such as the mTOR and p53 pathways, and inhibit the proliferation of tumor cells [10, 11]. However, AMPK may also reprogram many cellular metabolic processes to restore energy homeostasis thereby promoting cell survival during metabolic stress. Recent study demonstrates that a subunit of AMPK is one of only two genes for which decreased expression resulted in reduced survival of prostate cancer cells [12]. Another study demonstrates that AMPK promotes the survival of cells detached from extracellular matrix and glucose-deprived cells by regulating cellular levels of NADPH, an essential coenzyme for many biosynthetic reactions [13]. In addition, AMPK activation seems to have both anti-tumor and pro-tumor effects in melanoma cells expressing the oncogene BRAF [14].

Although aspirin can inhibit cancer cells, it is unclear whether cancer cells may elicit adaptive response that antagonizes the therapeutic effect of aspirin and leads to drug resistance. Here, we demonstrate that aspirin induces the expression of MCL-1 through AMPK-mTORC2-Akt/ERK axis. Knockdown of AMPK or MCL-1 enhances aspirin-induced apoptosis in HCC and colon cancer cells. The multikinase inhibitor sorafenib blocks aspirin-induced MCL-1 upregulation. Combination of aspirin and sorafenib leads to much more cell death and less cell proliferation rate than each agent alone. Treatment of HCC and colon cancer xenografts with both aspirin and sorafenib results in more significant tumor suppression than single agent. This study reveals a mechanism underlying the promotion of tumor cell survival by AMPK and aspirin resistance.

In a preliminary gene expression analysis, we found that MCL-1 transcription was significantly up-regulated by aspirin in breast cancer cell line MDA-MB-231. To determine the effect of aspirin on MCL-1 expression in HCC cells, we treated HepG2 with aspirin, followed by real-time PCR analysis of MCL-1 transcription. Treatment of HepG2 cells with aspirin significantly induced MCL-1 transcription (Figure 1A). Similar effect was detected in colon cancer cells SW480 (Figure 1A). In addition, aspirin induced MCL-1 protein expression in both HepG2 and SW480 cells (Figure 1B). Previous study demonstrates that aspirin has beneficial effect on colorectal cancer patients specifically harboring a mutated PIK3CA [6]. The colon cancer cell lines RKO and HCT-116 harbor mutated PIK3CA. We then detected the effect of aspirin on MCL-1 in RKO and HCT-116 cells. Aspirin inhibited MCL-1 expression in both RKO and HCT-116 cells (Supplementary Figure 1), suggesting that the effects of aspirin on MCL-1 expression vary among different cell lines. 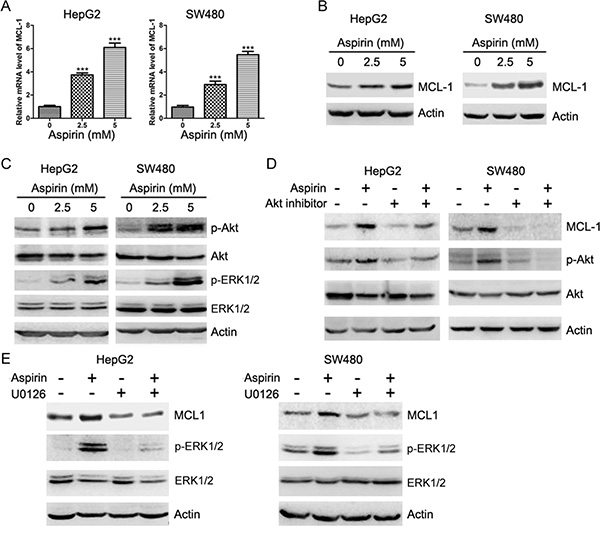 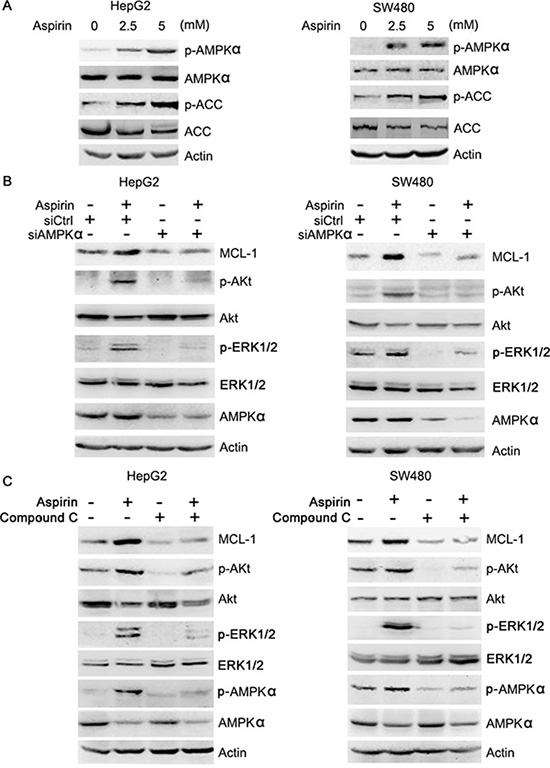 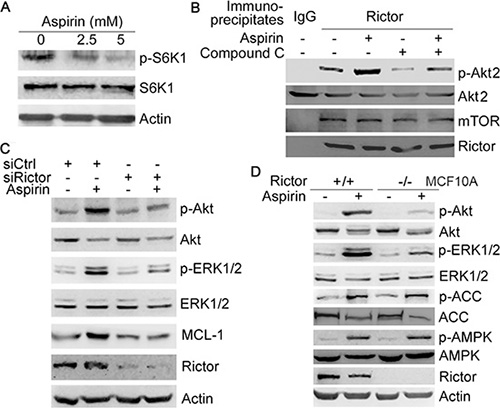 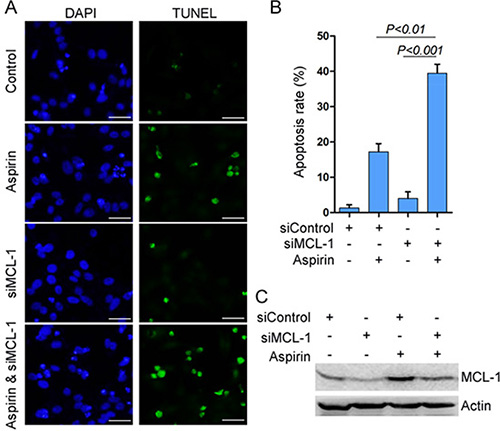 Figure 4: MCL-1 knockdown potentiates aspirin-induced apoptosis. (A) HepG2 cells were transfected with siControl or siMCL-1, followed by treatment with or without 5 mM aspirin. The cells were subjected to TUNEL assay for detecting apoptosis. Bar, 50 μm. (B) The apoptosis rate was plotted. The apoptosis rate was plotted. n = 3 in each group. (C) Western blot analysis of MCL-1 expression. A representative of three independent experiments was shown. 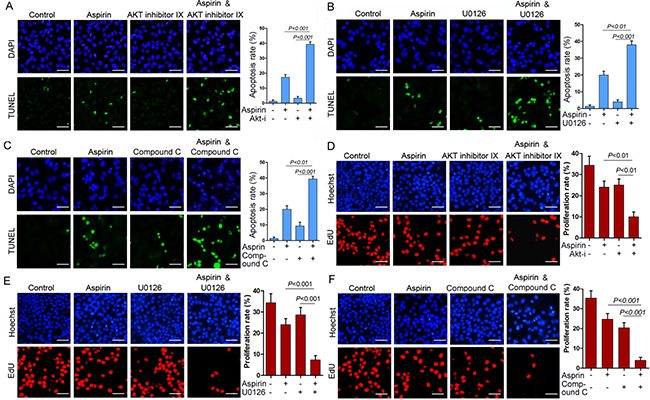 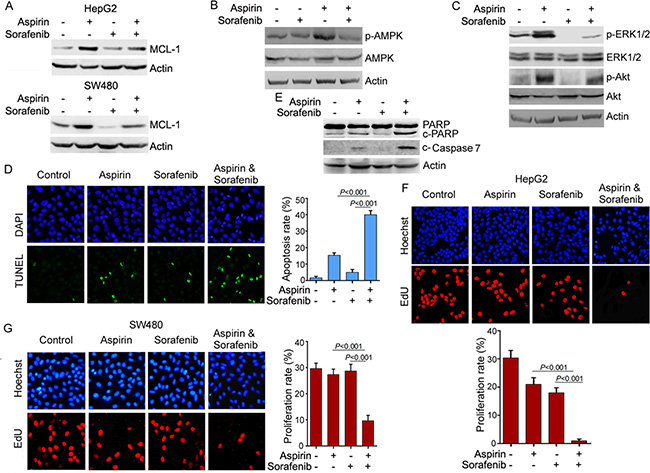 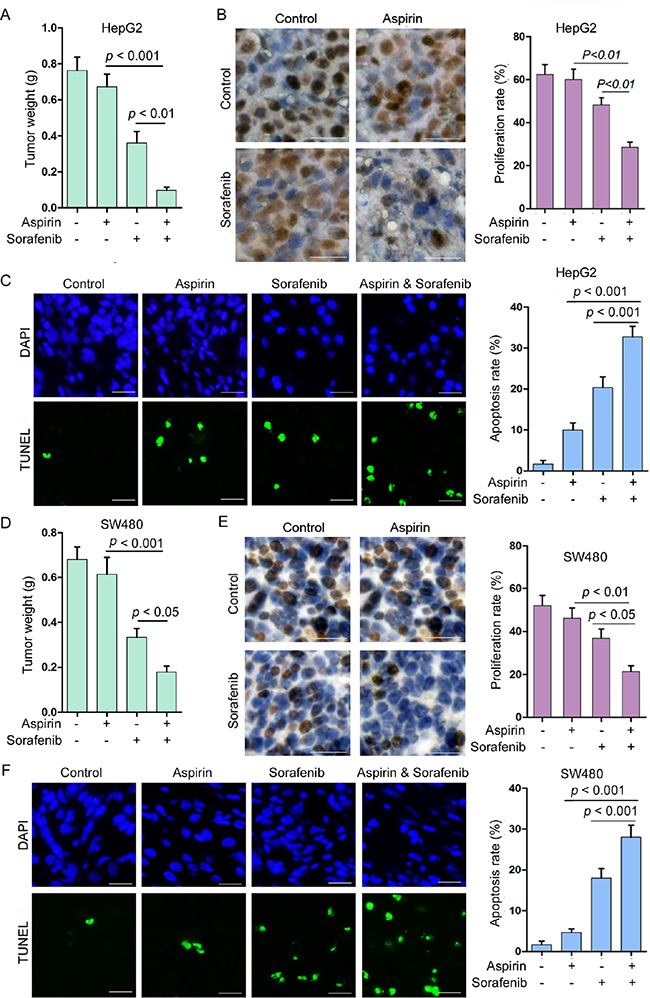 The nonsteroid antiinflammatory agent aspirin is a promising anti-aging or cancer chemoprevention agent [20, 21]. In addition, the favorable outcome that has been associated with treatment of colorectal cancer and hepatocellular carcinoma with aspirin suggests that aspirin may be a promising agent for adjuvant therapy [7, 22, 23]. Besides inhibition of COX, aspirin has a diversity of tumor suppressive effects through COX-independent mechanisms [24, 25]. Despite a lot of epidemiological and preclinical studies that test the cancer preventive role and tumor suppressive role of aspirin, little is known about the roadblocks that counteract the anticancer effect of aspirin.

The current study demonstrates that aspirin could up-regulate MCL-1 expression, which antagonizes cell apoptosis. AMPK-mTOR-Akt/ERK axis is responsible for the induction of MCL-1 by aspirin. AMPK can inhibit mTORC1. Previous studies have demonstrated that inhibition of mTORC1 may paradoxically lead to increased mTORC2 activity through multiple mechanisms [18, 26]. While mTOR is usually known as a serine/threonine kinase, we recently find that mTOR has tyrosine kinase activity and identify IGF-IR and insulin receptor as novel targets of mTORC2 [27]. Therefore, mTOR belongs to dual-specificity kinase that targets serine, threonine and tyrosine [27]. Whereas aspirin inhibits mTORC1, it stimulates mTORC2 kinase activity in AMPK-dependent manner. While AMPK reportedly inhibits cell proliferation [10, 11], it is required for cell survival under the conditions of elevated MYC levels [25]. In addition, decreased expression of a subunit of AMPK reduces survival of prostate-cancer cells, but has no effect on normal prostate cells [12]. The effects of AMPK activation on cell proliferation and survival may be context-dependent. We demonstrate here, in the context of aspirin treatment, activation of AMPK may positively regulate cancer cell proliferation and survival through Akt, ERK and MCL-1. Up-regulation of MCL-1 represents another mechanism underlying the promotion of cell survival by AMPK. Aspirin-treated tumor cells appear to be addictive to AMPK-Akt/ERK activation, since inhibition of AMPK, Akt or ERK greatly inhibits cell proliferation and promotes apoptosis.

While aspirin reportedly inhibits MCL-1 expression in leukemia cells and oral squamous carcinoma cells [29, 30], the current study demonstrates that aspirin up-regulates MCL-1 expression in colon cancer cell line SW480, but down-regulates MCL-1 in aspirin sensitive RKO and HCT-116 cells. Although a report suggests that aspirin down-regulates MCL-1 in HepG2 cell line [31], the current study demonstrates that aspirin up-regulates MCL-1 in HepG2 cells. In addition, a study in some colon cancer cells found that no change in MCL-1 expression after treatment of these cells with aspirin [32]. Hence, aspirin may regulate MCL-1 in context- or cell type-dependent manner. Inhibition of COX2, one of the targets of aspirin, reportedly inhibits PI3K/Akt kinase activity in epithelial ovarian cancer [33]. Consistent with the current study, Feng and collegues reported that aspirin could induce Akt and ERK1/2 phosphorylation in HepG2 cells [34]. Our current study demonstrates that activation of AMPK contributes to the induction of Akt phosphorylation by aspirin. Therefore, the extent to which COX2 is inhibited and AMPK is activated may dictate the fate of cancer cells exposed to aspirin. Given that the metabolite of aspirin, rather than aspirin itself directly activates AMPK, it is possible that the metabolism of aspirin in different cell types may affect its biological outcome. Recent studies suggest that the genetic backgrounds of tumors or individuals may affect the response to aspirin, either in chemoprevention or chemotherapy setting [6, 35]. Change in Akt, ERK1/2 phosphorylation and MCL-1 levels may represent additional predictive biomarkers for the responsiveness to aspirin.

All siRNAs were custom-synthesized products of Ribobio Co., Ltd. (Guangzhou, China). The sequences of AMPKα1, rictor and MCL-1 siRNA used are 5′-UUACUUCUGGUGCAGCAUAdTdT-3′, 5′-ACUUGUGAAGAAUCGUAUCdTdT-3′, 5′-AAGUAU CACAGACGUUCUCdTdT-3′, respectively. The double-stranded siRNA was dissolved in DEPC-treated water. LipofecTAMINE 2000 reagent (Thermo Fisher Scientific, Waltham, MA) and 50 nM siRNA duplex were separately diluted in 250 μl of OPTI-MEM®I Reduced Serum Medium and incubated at room temperature. After 5 minutes, the two solutions were mixed together. The mixture was incubated at room temperature for 20 minutes and then added into cell culture. 48 hours after transfections, cells were harvested for further experiments.

The immunoprecipitated target protein samples were washed once with cold kinase buffer (25 mM Hepes pH 7.5, 100 mM potassium acetate, 1 mM MgCl2). Then the recombinant Akt2 protein and 500 μM ATP were added into the immunoprecipitated protein samples and incubated at 37°C. One hour later, the reaction was stopped with the addition of 30 μl loading buffer and boiled for 10 minutes. The phosphorylation of substrate protein was analyzed by Western blotting.

The animal care was in accordance with institution guidelines. 5 × 106 cultured cancer cells in 100 μl of PBS were subcutaneously injected into 5-week-old BALB/c nude mice. After about 5 days, when the tumor size reached approximately 2–4 mm, the mice were orally administrated with aspirin (100 mg/kg/day), sorafenib (15 mg/kg/day) or both daily. The control group administrated with vehicle only. The size of the tumor was measured per three days using a vernier caliper. About 30 days after the beginning of treatment, the mice were sacrificed, and the tumors were resected. The tumor tissues were subjected to immunohistochemical analysis and western blotting.

Immunohistochemistry (IHC) was performed on tissue sections from formalin-fixed and paraffin-embedded tissue blocks of the xenograft models. The tissue sections were mounted on slides and deparaffinized by xylene followed by rehydration using graded ethanol. Next, the slides were subjected to antigen retrieval and incubated with anti-Ki67 primary antibody overnight at 4°C and biotin-labeled secondary antibody for 15 minutes at room temperature, followed by incubating with streptavidin/horseradish peroxidase (HRP) for 15 minutes, staining with diaminobenzidine chromagen, and counterstaining with hematoxylin. Finally, the slides were detected by the light microscope. The cells expressing Ki67 were stained brown, and all cells showed blue with hematoxylin. Quantification of all cells and the Ki67 positive cells in same fields were performed by acquiring the images in random fields and counting cells in four random fields in each slide.

This work is supported in part by National Natural Science Foundation of China (81272215).

2. Carrat F. Statin and aspirin for prevention of hepatocellular carcinoma: what are the levels of evidence? Clin Res Hepatol Gastroenterol. 2014; 38:9–11.