MicroRNAs (miRNAs, miRs) have critical functions in various biological processes such as development, infection, immunity, tumor development and progression [1]. Although numerous miRNAs have been associated with carcinogenesis and the progression of cancer, many of their biological roles remain to be characterized [2–4]. Members of the miR-200 family are key regulators of epithelial-mesenchymal transition (EMT), an important step in the progression of primary tumors to distant metastasis. For instance, Yeh et al. [5] reported that simultaneous silencing of miR-200c and miR-141 was likely to be responsible for the bile duct metastasis of HCC via EMT activation. However, little is known about the specific role of miR-200b in human hepatocellular carcinoma (HCC) [6, 7].

The polycomb group protein BMI1 plays a crucial role in the regulation of cell proliferation, stem cell maintenance [8], tumorigenesis and tumor progression [9]. Overexpression of BMI1 has been observed in several human malignancies, including HCC, and BMI1 acts as an oncogene in some cancer types [9, 10]. We recently demonstrated that BMI1 expression is elevated in HCC and the silencing of the BMI1 gene inhibits the proliferation and invasiveness of human HCC cells [11, 12]. BMI1 is also reportedly a target gene of miR-200b in tongue and prostate cancer [13, 14]. However, the exact regulatory mechanisms of BMI1 expression and its relationship with miR-200b in the initiation and progression of HCC remain to be explored. In this study, we examined the potential roles of miR-200b and BMI1 in the progression of HCC and explored the underlying regulatory mechanisms.

Downregulation of miR-200b in HCC is associated with BMI1 overexpression 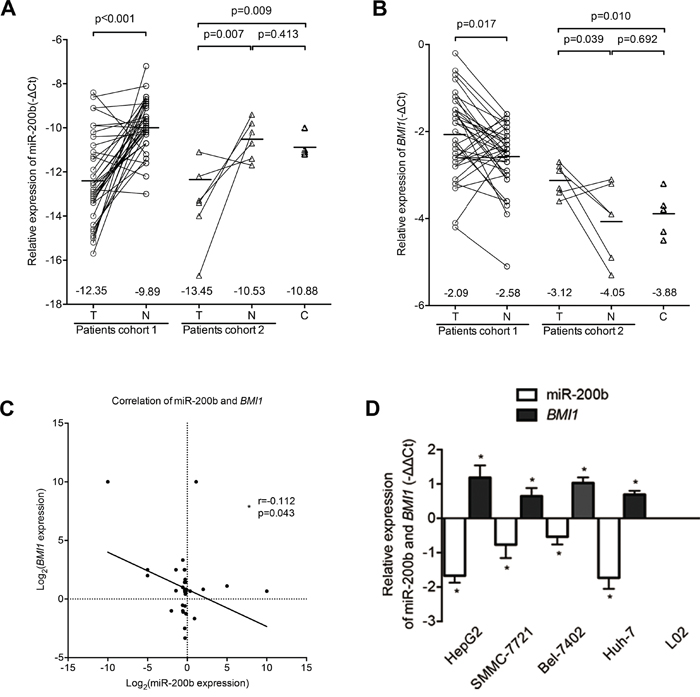 To validate BMI1 as a bona fide target gene of miR-200b, a human BMI1 3'-UTR fragment containing the wild type or mutant type miR-200b-binding sequence was subcloned into the XhoI/NotI site downstream of the firefly luciferase reporter gene in the psiCHECK-2 vector. Interestingly, co-transfection of the miR-200b mimics specifically decreased the luciferase expression of the BMI1-3'-UTR-wt reporter. By contrast, the luciferase activities of the four BMI1-3'-UTR-mut reporters and the psiCHECK-2 control reporter were unaffected by the simultaneous transfection of the miR-200b mimics, which suggests that BMI1 is a direct target gene of miR-200b (Figure 2A). In addition, the results of the qPCR and western blot analysis demonstrated that transfection with miR-200b mimics significantly reduced the mRNA and protein expression levels of BMI1 in HCC cells (Figure 2B, C and G; Figure S1). By contrast, a miR-200b inhibitor significantly enhanced the expression of BMI1 in HCC cells (Figure 2D, E and G; Figure S1). Accordingly, the silencing of the BMI1 gene by siRNA transfection in HCC cells resulted in the downregulation of endogenous BMI1 mRNA and protein levels compared with the negative control (Figure 2F and G; Figure S1). Taken together, these results indicate that BMI1 is a direct target gene of miR-200b and can be negatively regulated by miR-200b. 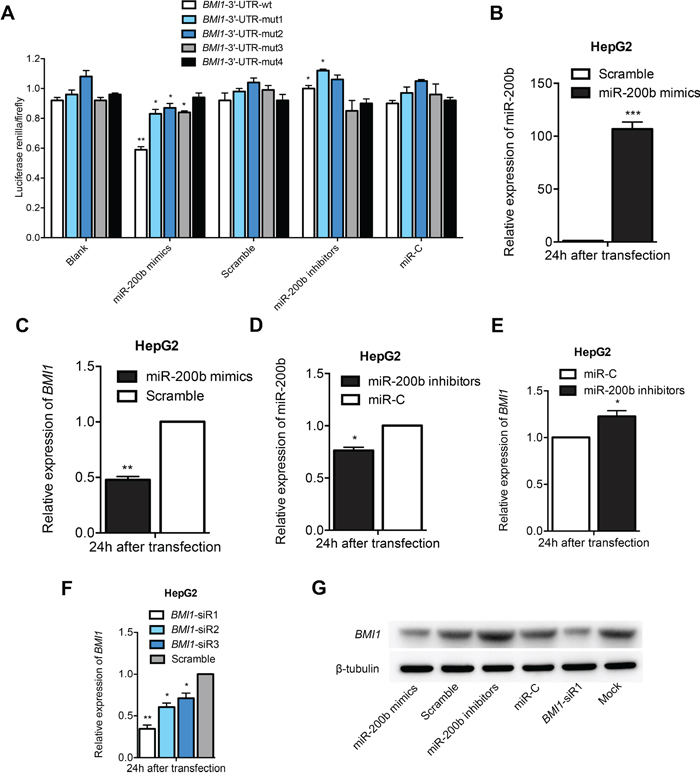 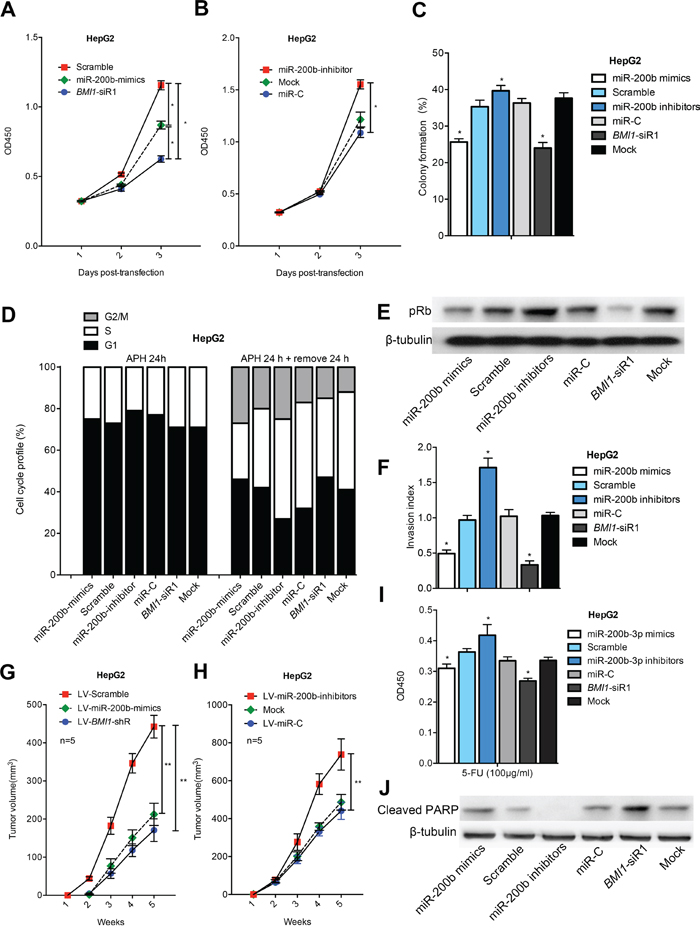 Next, cell cycle distribution analysis was performed to investigate whether the effects of miR-200b and BMI1 are mediated by cell cycle regulation. Upon treatment with aphidicolin (5 μM), more than 70% of the cells underwent growth arrest at the G0/G1 stage, and no difference was observed among the six groups in terms of cell cycle distribution. After removal of aphidicolin, transfection of miR-200b mimics or BMI1 siRNA triggered significant growth arrest of HCC cells at G1 phase, suggesting that the G1/S cell cycle transition is slowed by miR-200b-mediated BMI1 silencing (Figure 3D; Figures S5 and S6). One function of the retinoblastoma protein (Rb) is to prevent excessive cell growth by preventing the progression from G1 to S phase of the cell cycle [15]. We observed that miR-200b mimics or BMI1-siRNAtransfection induced a higher rate of Rb dephosphorylation compared with the controls, consistent with the accumulation of cells in G1 phase (Figure 3E; Figure S6).

We previously demonstrated that knockdown of BMI1 inhibits the invasive properties of human HCC cells [11]. Because miR-200b is a negative regulator of BMI1, we performed an in vitro cell invasion assay to further determine if miR-200b affects cell invasion. As expected, transfection of HCC cells with miR-200b mimics or BMI1-siRNA notably suppressed their invasion ability compared with normal control cells (Figure 3F; Figures S7 and S8). Collectively, the above results suggest that miR-200b not only suppresses growth but also inhibits the invasiveness of tumor cells by directly targeting BMI1.

The in vitro findings were confirmed using animal models. Nude mice were injected subcutaneously in opposite flanks with control lentiviral vector-infected cells and miR-200b mimics/BMI1-shRNA vector-infected cells. Consistent with the results of our in vitro study, enhanced expression of miR-200b or decreased expression of BMI1 in HCC cells significantly suppressed their tumorigenicity in vivo (Figure 3G; Figures S9 and S10). The above findings were supported by loss-of-function studies in which a miR-200b inhibitor that significantly decreased endogenous miR-200b expression promoted in vivo tumorigenicity of HCC cells (Figure 3H; Figures S9 and S10). Taken together, these data indicate that either the transfection of HCC cells with miR-200b or the knockdown of BMI1 in HCC cells significantly inhibits tumorigenicity in vivo.

Hypermethylation of the miR-200b gene promoter in HCC 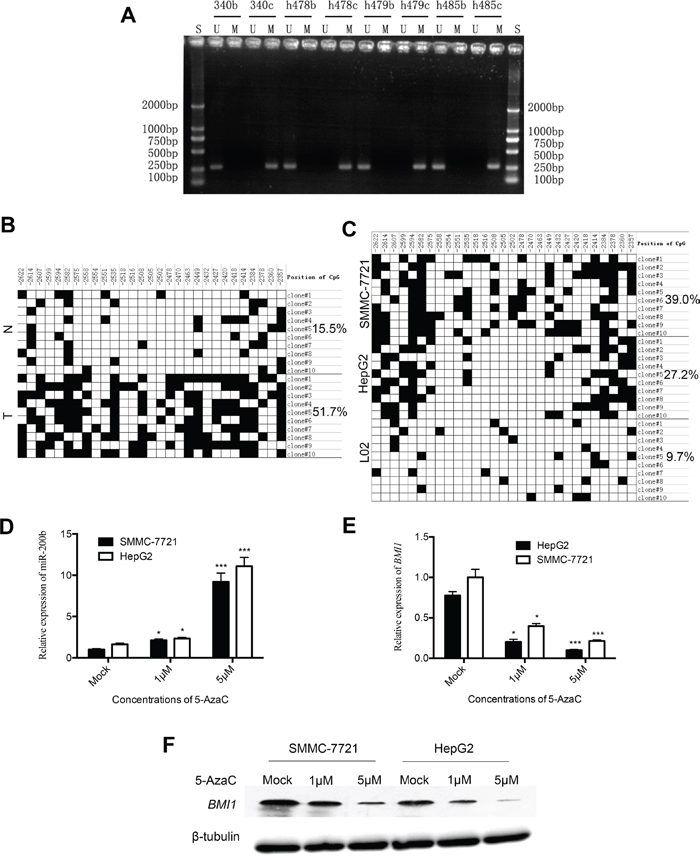 Figure 4: Analysis of miR-200b methylation status in HCC tissues and cell lines. A. Results of the MSP analysis of miR-200b in HCC tissues. B. BSP in selected HCC tumor (T) and non-cancerous liver tissues (N) (case h479). The filled boxes denote methylated CpGs. C. BSP in liver cancer cell lines (HepG2, SMMC-7721) and in the normal liver cell line L02. D. miR-200b expression was upregulated in HepG2 and SMMC-7721 cells upon treatment with 5-AzaC for 36h. E, F. mRNA and protein levels of BMI1 were downregulated upon treatment with 5-AzaC for 36h.

We previously determined that miR-101 can inhibit the progression of HCC via downregulation of enhancer of zeste homolog 2 (EZH2; polycomb group protein) [2]. In this study, we demonstrated that the tumor suppressor miR-200b represses HCC progression by directly targeting the oncogene BMI1. Furthermore, our data indicate that miR-200b is partially silenced by DNA hypermethylation.

Accumulating evidence suggests that miRNAs regulate a variety of physiological functions via the regulation of their target gene-related signaling pathways [16]. The previously identified tumor suppressor miR-200b modulates tumor development and malignant progression by downregulating its target genes. Sun and colleagues [13] have demonstrated that miR-200b can inhibit chemotherapy-induced EMT in human tongue cancer cells by targeting BMI1. In this study, we observed that the expression of miR-200b was downregulated in most of the HCC tissues tested and that the miR-200b level was inversely correlated with the expression level of BMI1. Luciferase assays revealed direct inhibition of BMI1-3'-UTR expression by miR-200b. In agreement with these data, qPCR and western blot analysis demonstrated that miR-200b could inhibit the mRNA and protein expression of BMI1 in HCC cells. Taken together, these results strongly suggest that BMI1 is a direct target gene of miR-200b in HCC, thus indicating the underlying mechanism by which miR-200b regulates BMI1 at both the transcriptional and post-translational levels.

Emerging evidence suggests that EMT can promote cancer cell motility and plasticity and can fuel both tumor initiation and metastatic spread [17]. The miR-200 family plays a vital role in tumor suppression through the inhibition of EMT [6, 7]. MiR-200b can restrain the process of EMT and consequently inhibit EMT-mediated tumor invasion and metastasis. MiR-200b is therefore considered an important oncomir in many types of cancer [18–20]. Here, we demonstrated that miR-200b not only suppresses invasion but also inhibits the growth of HCC cells via the direct targeting of BMI1. Ectopic overexpression of miR-200b also dramatically inhibited HCC cell proliferation and colony formation, thereby contributing to the delay in HCC progression. These effects may be mediated by the inhibition of the BMI1 oncogene, which would lead to a higher rate of Rb dephosphorylation and the accumulation of cells in G1 phase. In addition, tumor growth inhibition was also observed in vivo in HepG2 and SMMC-7721 xenografts.

In summary, our results indicate that miR-200b is partially silenced by DNA hypermethylation and can repress tumor progression by directly targeting BMI1 in HCC. Our study suggests that miR-200b plays an important role in the progression of HCC and may be a potential therapeutic target in cancer progression.

Tissue samples were obtained from patients with HCC (n = 42) and benign tumors (n = 6) in the Department of Biliary-Pancreatic Surgery, SunYat-Sen Memorial Hospital, Sun Yat-Sen University (Guangzhou, People's Republic of China) from January 2000 to December 2011. Pathologic diagnosis was confirmed by two pathologists independently. All specimens obtained within 20 minutes after resection and were immediately frozen in liquid nitrogen until further use. Informed consent was obtained from all subjects according to the Internal Review and Ethics Boards of SunYat-Sen Memorial Hospital, and the project was in accordance with the Helsinki Declaration of 1975. Clinicopathologic characteristics are presented in Tables S1 and S2.

The predicted targets of miR-200b and their target sites were analyzed usingmiRanda (http://www.microrna.org/microrna/home.do), miRBase (http://www.mirbase.org/) and TargetScan (http://www.targetscan.org/). We search and obtain the 2kb DNA gene sequence of 5'-upstream of miR-200b by bioinformatics genome database UCSC (http://genome.ucsc.edu/) and one CpG island were found (Criteria used: Island size > 100 bp, GC Percent > 50.0%, Obs/Exp > 0.6). We carry out promoter search by means of ITFP (http://itfp.biosino.org/itfp/TFSearcher/index.jsp).

RNA was extracted and qPCRwas conducted as already described [12]. The sequences of all primers are provided in Table S3.

All miRNA mimics, inhibitors and BMI1 siRNAs were obtained from GenePharma (Shanghai, China) and their sequences were shown in Table S4. Lipofectamine 2000 (Invitrogen, Carlsbad, CA, USA) was used as a transfection reagent, and transfections were performed according to manufacturers' recommendations (described in details elsewhere [12]).

Human miR-200b mimics/inhibitors and BMI1-shRNA oligoswere designed and cloned into the pGLV3/H1/GFP+Purolentiviral vector (between the BamHI and EcoRI site). Oligos and primer sequences for generation of Lentiviral-miR-200b/BMI1-shRNA are listed in Table S6. HepG2 and SMMC-7721 cells were infected with our newly recombinant lentiviruses and negative control. Virus-containing media were changed with fresh culture medium after 12 - 24 h of infection. All cells were exchanged with fresh medium containing puromycin to select for stably transfected cells. The transduction efficiency and stability of the transfectants were monitored by FACS analysis (Figure S13). The BMI1 protein expressions in these cells were checked by western blot analysis.

Genomic DNA from patient samples and cell lines was isolated with Easypure Genomic DNA kit (TransGen Biotech, Beijing, China). MSP was conducted by simultaneous use of primers for methylated and unmethylated forms (Table S3). The BSP primer (Table S3) was designed by Methprimer. Amplified PCR Products were purified and cloned into pMD19-T (TaKaRa). Ten clones of the selected pair of tumor and adjacent non-tumor tissue samples and each cell were sequenced, respectively. Percentage of methylation was calculated by QUMA (http://quma.cdb.riken.jp/top/index.html) [24].

For demethylation studies, HepG2 and SMMC-7721 cells were treated with the indicated concentrations of 5-AzaC (Sigma-Aldrich, St. Louis., MO, USA) for 36 h. The cells were then harvested for qPCR and western blot analysis.

All statistical analysis was performed using SPSS for Windows (version 17.0, SPSS, Chicago, IL, USA). All experiments for cell cultures were carried out independently at least three times and in triplicate each time. All data were expressed as mean ± standard deviation (SD) unless otherwise indicated. We determined the significance of differences in the human HCC data using χ2 test and Pearson’s correlation test, in the in vitro data using Student’s t test, and in the in vivo data using the Mann-Whitney U test. In all cases, p values < 0.05 were considered statistically significant.

Supplementary Information accompanies the paper on the Oncotarget website.

Each author certifies that he had nothing to disclose about the commercial sponsorship and no conflicts of interest that may be relevant to the submitted work.