*These authors contributed equally to the work

Incidence rates of esophageal cancer vary internationally by more than 21-fold; the highest rates are found in Eastern Asia and in Eastern and Southern Africa and the lowest rates are in Western Africa. Esophageal cancer is usually three to four times more common among men than women [1]. The two main types of esophageal cancer are squamous cell carcinoma and adenocarcinoma. From Northern Iran through Central Asia to North-Central China, 90% of cases are squamous cell carcinomas, compared with approximately 26% in the United States (among white individuals) [2, 3]. Patients are usually diagnosed with late-stage ESCC, which has limited treatment options. Therefore, there is a need for biomarkers to improve early detection and prognosis evaluation.

MicroRNAs (miRNAs) are noncoding RNA molecules of 18–25 nucleotides that inhibit translation or promote degradation of complementary messenger RNAs [5]. A single miRNA can influence the expression of hundreds of target genes, and miRNAs have been reported as key regulatory molecules in various diseases, including cancer [6]. Numerous studies have demonstrated that various miRNAs function as potential oncogenes or tumor suppressor genes during the progression of cancer [7], andmiRNAs have been associated with the carcinogenesis, metastasis, and prognosis of gastroesophageal cancers [8].

Aberrant expression of miR-486/miR-486-5p is associated with different types of disease. For example, high levels of circulating miR-486 are associated with acute myocardial infarction and may be used as a novel and powerful biomarker for acute myocardial infarction [9]. Reduced miR-486-5p expression is a common molecular event in human cancers [10–19] and miR-486 is frequently downregulated in hepatocellular carcinoma (HCC) tissues and cell lines. miR-486 inhibition in HCC cells enhances proliferation, invasion, and chemosensitivity to sorafenib [18]. miR-486 was shown to be significantly downregulated in primary gastric carcinoma (GC) and GC cell lines, and genomic loss of the miR-486 locus has been shown in approximately 25–30% of GCs, consistent with a tumor-suppressive role [15]. In contrast, miR-486-5p was upregulated in tissues of renal cell carcinoma. Deregulation of cancer-related miR-486-5p can also be a common event in both benign and malignant human breast tumors [17].

Early detection of lung adenocarcinoma in sputum using a panel of microRNA markers has been reported. Monitoring changes in plasma miR-486 expression might be an effective non-invasive method for predicting recurrence of early-stage non-small-cell lung cancer (NSCLC) [20]. Serum miR-486-5p holds great potential for further applications in the clinical diagnosis of lung cancers [21] and could be used to stratify patients with higher recurrence risk and potentially guide more effective surveillance tools for HCC [22]. We previously systematically screened the plasma miRNA profiles of patients with gastric non-cardia adenocarcinoma and healthy controls and identified miR-486-5p as one of five differentially expressed miRNAs [23].

However, there is an apparent contradiction between miR-486-5p expression in plasma and in GC tissues [23] and the clinical significance of miR-486-5p in GC remains unknown. We therefore investigated expression of miR-486-5p in tissues of different digestive system cancers including ESCC, GC, colon, rectum, liver, and pancreatic cancer, corresponding normal tissues, and normal digestive mucosa from healthy volunteers by miRNA locked nucleic acid (LNA) in situ hybridization, and evaluated its relationship with clinicopathologic parameters and prognosis.

Table 2: Characteristics of the study subjects with gastric carcinoma 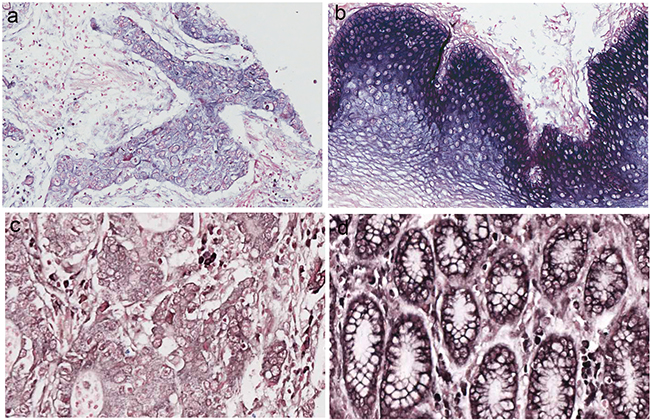 There was a tendency towards a difference in TNM stage and local invasion between patients with low/unchanged versus high expression levels of miR-486-5p in ESCC and GC (χ2 = 3.047, P = 0.082; χ2 = 2.912, P = 0.088 respectively), but no significant correlations between miR-486-5p expression levels and other clinicopathologic variables, including age, sex, tumor site, TNM stage, tumor size, nodal status, distant metastasis, and depth of tumor invasion (all P > 0.05; Tables 3, 4). 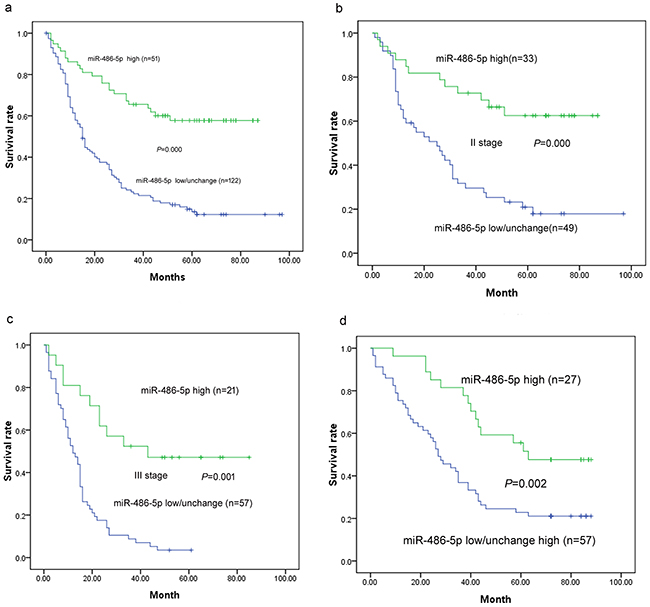 To date, the antiapoptotic genes OLFM4 [15], SIRT1 [24], PIM-1 [25], and DOCK3 [26], the tumor suppressor PTEN [27, 28], the cell proliferation and invasion genes CITRON and CLDN10 [18], and FGF9 [29] expressed by cancer-associated fibroblasts have been reported as potential targets for miR-486/miR-486-5p in malignant disease. However, the mechanistic role of miR-486-5p as either an oncogene or tumor suppressor in digestive system cancers remains largely unknown.

In our current study, the expression of miR-486-5p was increased in 90.0% (18/20) of esophageal, gastric, colon, rectum, liver, and pancreatic mucosa from healthy volunteers and decreased in 10.0% of normal digestive system mucosa samples. MiR-486-5p may have a protective function in healthy volunteers, as supported by a study suggesting that miR-486-5p inhibits pulmonary fibrosis [34]. We compared miR-486-5p expression levels in ESCC and paracancerous tissues by miRNA-LNA in situ hybridization and showed that miR-486-5p expression was significantly decreased in most, but not all, ESCC tissues—expression was decreased in 66.2% (129/195), increased in 32.3% (63/195), and unchanged in 1.5% (3/195) of ESCC tissues compared with paracancerous normal tissue. This suggests that miR-486-5p expression might have different prognostic implications in different individuals. MiR-486-5p was previously found to be markedly overexpressed in most primary glioma tissues compared with paired tumor-adjacent brain tissues, which significantly correlated with NF-kappaB activation status [35].

To the best of our knowledge, this study is the first to systematically explore the expression of miR-486-5p and its association with clinicopathologic features and prognosis of ESCC, GC, and other types of digestive system cancers, with a view to identifying curative therapies. Navon and colleagues recently reported that miR-486 was the top ranking underexpressed miRNA in cancer based on minRCoS ranking [12]. However, we found overexpression of miR-486-5p in 32.3% (63/195) of ESCC, 33.0% (31/94) of GC, 40.0% (8/20) of colon or rectum cancer, 40.0% (4/10) of liver cancer, and 20.0% (2/10) of pancreatic cancer patients. This implies heterogeneous expression of miR-486-5p, with high expression in a fraction of digestive system cancers. Moreover, we showed for the first time that miR-486-5p expression is increased in most esophageal, gastric, colon, rectum, liver, and pancreatic mucosal tissues from healthy volunteers. A previous four-phase study detected increased miR-486-5p expression during the early stage of GC and identified five plasma miRNAs (miR-16, miR-25, miR-92a, miR-451, and miR-486-5p) that might serve as potential diagnostic markers for early-stage gastric non-cardia adenocarcinoma [23]. Our research group previously found that miR-486-5p, as one member of the four-miRNA signature from the serum, may serve as a noninvasive predictor for the overall survival of NSCLC [31]. In the present study, ESCC and GC patients with higher miR-486-5p expression showed better prognoses than those with lower or unchanged expression. Moreover, univariate and multivariate Cox regression analysis of potential prognostic factors for survival identified a significant relationship between low/unchanged miR-486-5p expression and poor prognosis of ESCC (P < 0.001, P < 0.001 respectively) and GC (P = 0.002, P = 0.003 respectively). These results are in accordance with our previous finding that high expression of miR-486-5p in gastric cancer implied better prognosis [29]. Therefore, the detection of miR-486-5p in the circulation or tissues may provide new information to help in early diagnosis and prognostic evaluation of digestive system cancers, even though the molecular function of miR-486-5p in digestive system cancers remains unknown.

Several possible explanations for the observed downregulation of miR-486-5p in tumor tissues have been reported. For example, miR-486-5p is located on chromosome 8p11.21, which is one of the most frequently deleted genomic regions containing potential tumor suppressor genes, in various types of tumors including GC and lung cancer [15, 36]. In our previous work, we found FGF9 is one of potential target genes of miR-486-5p in GC. FGF9 expression was decreased in 69.0% (58/84) of GC samples compared with normal paracancerous tissues using immunohistochemical analysis[29].

The results of this study indicate that digestive system cancers, especially cases of ESCC and GC with low or unchanged miR-486-5p expression compared with neighboring normal tissues, have a relatively poor prognosis, whereas high miR-486-5p expression is associated with a better prognosis. Although further studies are needed to confirm this work, these results suggest that miR-486-5p may represent a valuable independent prognostic indicator, as well as a potential target for the treatment of digestive system cancers.

Four biochips were used to detect miR-486-5p in digestive system cancers, especially ESCC, and neighboring normal tissues, and normal digestive normal mucosa were also included as controls. A total of 680 digestive cancer tissues, neighboring normal tissues, and normal digestive normal mucosa were included in the study. Samples from tumor tissue, corresponding neighboring normal tissue, and complete normal mucosa were collected from patients with histologically diagnosed digestive cancers who underwent surgical resection between June 2006 and December 2010. Data for 12 patients were excluded because the corresponding dots were not on the chips during this experiment or because of loss to follow-up. Paraffin-embedded tissue samples were collected retrospectively from archival material stored in the Biobank Center at the National Engineering Center for Biochip at Shanghai (Shanghai Outdo Biotech Cop., Ltd).

The following clinicopathologic data were obtained from the original pathology reports: age, sex, tumor size, location and invasion, lymph node metastases, grade of differentiation, and tumor stage. Staging of GC was assessed according to American Joint Committee on Cancer criteria. The clinical and pathologic data for the patients are provided in Table 1. Written informed consent was obtained from all patients, and the protocol was approved by the Ethical Committee of the National Engineering Center for Biochip at Shanghai.

Follow-up times were measured from the date of surgery to the date of death for all 185 ESCC patients. Data for 7 ESCC and 6 GC patients were excluded from miR-486-5p analysis because the dots were not included in the chips used in this experiment. The last follow-up point was in September 2014. The median follow-up time was 5.9 years (range 3.8–7.8 years). Among the patients, 132 died during the follow-up period.

Tissue microarrays were constructed using appropriate tissue cores from formalin-fixed and paraffin-embedded samples as described previously [37]. Briefly, appropriate tumor areas and corresponding non-tumor gastric samples were selected by pathologists and a single core (diameter 0.6 mm) was taken from each tissue. Tissue microarray blocks were constructed using an automated tissue arrayer (Beecher Instruments, Sun Prairie, WI, USA). The array blocks were cut into 5-μm sections, and the sections were stained with hematoxylin and eosin to verify the presence of tumor cells. In all cases, tissue cores obtained from normal adjacent tissue served as internal controls.