MET amplification as a potential therapeutic target in gastric cancer

Gastric cancer is the third most common cause of death from malignant disease in men (fifth in women) worldwide [1]. The prognosis for patients with unresectable advanced or recurrent gastric cancer remains poor, with a median survival time of less than 1 year in individuals receiving conventional therapy [2-8]. The combination of trastuzumab, an antibody targeted to HER2, with chemotherapy has yielded a survival benefit for patients with HER2-positive gastric or gastro-esophageal junction cancer [7], with HER2-positive tumors accounting for 7 to 17% of all gastric cancers [9-11]. Further research is thus warranted to identify new therapeutic targets for gastric cancer patients.

The MET proto-oncogene encodes the receptor tyrosine kinase c-MET. The binding of its ligand, hepatocyte growth factor, to MET results in tyrosine phosphorylation of the receptor and activation of downstream signaling molecules. Oncogenic activation of MET suppresses apoptosis and promotes cell survival, proliferation, migration, and differentiation as well as gene transcription and angiogenesis [12]. In gastric cancer, such activation of MET has been attributed to gene amplification [13-15]. However, the prevalence of MET amplification has varied among studies [13-21], possibly as a result of differences in the methods applied. This uncertainty led us to determine the prevalence of MET amplification in 266 formalin-fixed, paraffin-embedded (FFPE) specimens of gastric cancer obtained during surgery. To ensure the efficient detection of MET amplification, we adopted a sequential approach involving PCR-based determination of gene copy number followed by confirmatory FISH analysis. Moreover, to assess the potential of MET amplification as a therapeutic target in gastric cancer, we investigated its impact on cell survival and signal transduction. 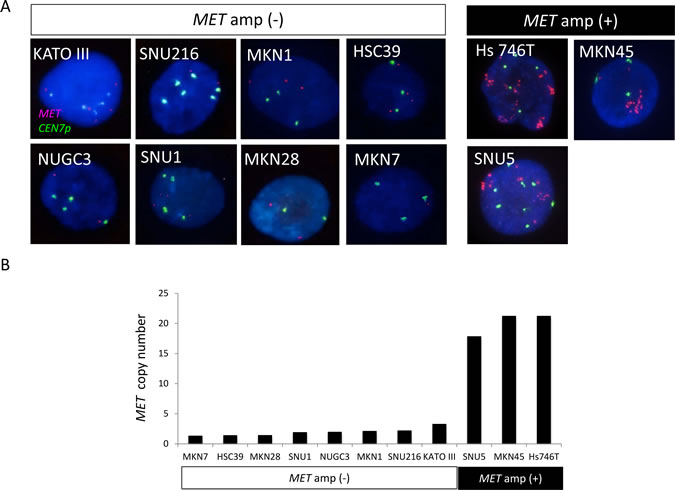 Table 1: Characteristics of the 266 study patients

Table 2: Characteristics of the 15 patients with the highest MET copy numbers

Abbreviations: ND, signals not detected; U, undifferentiated type; D, differentiated type. (+) or (–) denote positive or negative for MET amplification on the basis of the MET/CEN7p ratio; > for OS indicates the patient was still alive. 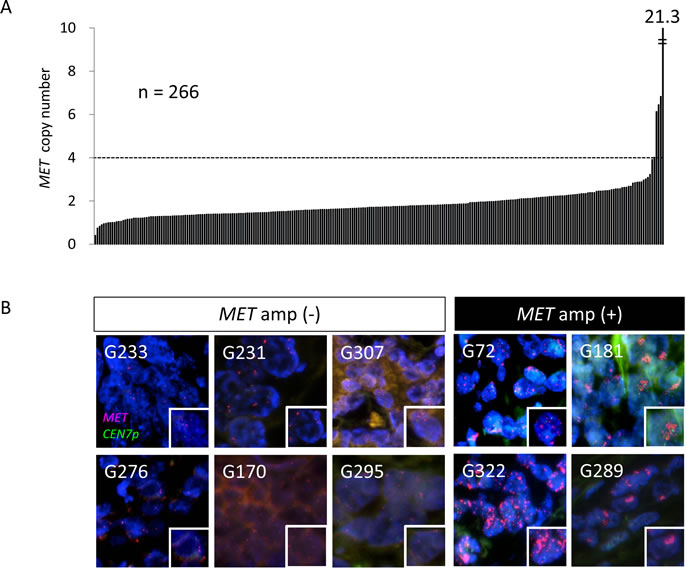 aComparison between stages I + II and III + IV. bComparison between intestinal-type and diffuse-type gastric cancer. P values were calculated with Student's two-tailed t test for age and the chi-square test for the other variables. 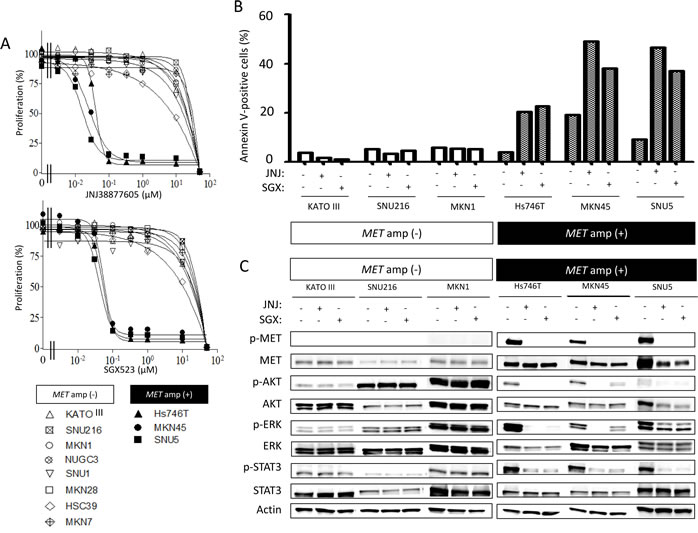 Activation of MET signaling promotes tumor cell growth, survival, migration, and invasion as well as tumor angiogenesis [24]. In gastric cancer, gain-of-function mutations of MET are exceedingly rare [25-27], with MET activation having been attributed mostly to gene amplification [13-15]. Previous studies based on FISH analysis have detected MET amplification in up to 4% of patients with gastric cancer [14, 16, 20]. On the other hand, an increase in MET copy number was found in 10 to 20% of gastric cancer patients by Southern blot analysis [17-19] or with a PCR-based assay [28, 29]. An increase in gene copy number in malignant tumors can result from at least two genetic mechanisms, gene amplification and polysomy. Gene amplification refers to a copy number gain for a specific gene (or group of genes) on a given chromosome arm without a change in copy number for genes located in other regions of the chromosome [30], whereas polysomy gives rise to a copy number gain for a given gene as a result of the presence of extra copies of the entire chromosome. Southern blot analysis and PCR-based copy number assays recognize a gain in gene copy number regardless of the underlying cause and are thus unable to distinguish gene amplification from polysomy, a limitation that is sometimes overlooked, with consequences for determination of the true prevalence of MET amplification in gastric cancer.

A total of 267 patients with histologically confirmed gastric cancer who had undergone surgery at the National Cancer Center Hospital (Tokyo, Japan) between 1996 and 2006 were included in the study. All the patients had an Eastern Cooperative Oncology Group performance status of 0 to 2. One patient was subsequently excluded as a result of an insufficient quantity of DNA extracted from the corresponding tissue specimen. The specimens from the remaining 266 patients were thus analyzed. The present study was approved by the Institutional Review Board of the National Cancer Center Hospital, and informed consent was obtained from all subjects.

Macrodissection of the surgical specimens preserved as FFPE tissue was performed after removal of paraffin in order to select a region of cancer tissue. Genomic DNA was extracted from the cancer tissue with the use of a QIAamp DNA Micro Kit (Qiagen, Hilden, Germany). The DNA concentration of the extracts was determined with a NanoDrop 2000 spectrophotometer (Thermo Scientific, Waltham, MA).

The copy number of MET was determined with the use of a TaqMan Copy Number Assay [32] and the Hs05005660_cn (intron 16) primer (Applied Biosystems, Foster City, CA). The TERT locus was used as the internal reference, and DNA from noncancerous FFPE tissue was used as a normal control. Real-time PCR was performed in a total volume of 20 µL per well containing 10 µL of TaqMan genotyping master mix, 20 ng of genomic DNA, and each primer. The amplification protocol included an initial incubation at 95ºC for 10 min followed by 40 cycles of 95ºC for 15 s and 60ºC for 1 min. The resulting products were detected with the use of ABI Prism 7900HT Sequence Detection System (Applied Biosystems). Data were analyzed with SDS 2.2 software and Copy Caller software (Applied Biosystems).

MET copy number per cell was determined by FISH with the use of the c-met / CEN7p Dual Color FISH Probe (GSP Laboratory, Kawasaki, Japan) [22], where CEN7p is the centromeric region of chromosome 7p. The signals were detected by fluorescence microscopy and were evaluated by independent observers (H.K. and I.O.). After screening all entire sections, images of tumor cells were captured and recorded and the signals for 60 random nuclei were counted for an area where individual cells were recognized in at least 10 representative images. Nuclei with a disrupted boundary were excluded from the analysis. Gene amplification was strictly defined by a mean MET/CEN7p copy number ratio of >2.2, corresponding to a previous definition of MET amplification [16]. The presence of polysomy or an equivocal MET/CEN7p ratio (1.8 to 2.2) were thus scored as negative for amplification.

Cells were transferred to 96-well flat-bottomed plates and cultured for 24 h before exposure to various concentrations of JNJ38877605 (Janssen Pharmaceutica NV, Beerse, Belgium) or SGX523 (SGX Pharmaceuticals, San Diego, CA) for 72 h. Tetra Color One (5 mmol/L tetrazolium monosodium salt and 0.2 mmol/L 1-methoxy-5-methyl phenazinium methylsulfate; Seikagaku Kogyo, Tokyo, Japan) was then added to each well, and the cells were incubated for 3 h at 37°C before measurement of absorbance at 490 nm with a Multiskan Spectrum instrument (Thermo Labsystems, Boston, MA). Absorbance values were expressed as a percentage of that for nontreated cells, and the IC50 values of JNJ38877605 and SGX523 for inhibition of cell growth were determined.

The binding of annexin V to cells was measured with the use of an Annexin-V-FLUOS Staining Kit (Roche, Basel, Switzerland). Cells were harvested by exposure to trypsin-EDTA, washed with PBS, and centrifuged at 200 × g for 5 min. The cell pellets were resuspended in 100 μL of Annexin-V-FLUOS labeling solution, incubated for 10 to 15 min at 15° to 25°C, and then analyzed for fluorescence with a flow cytometer (FACSCalibur) and Cell Quest software (Becton Dickinson, Franklin Lakes, NJ).

Overall survival (OS) curves were estimated with the Kaplan-Meier method and compared with the log-rank test. Other statistical analysis was performed with Student’s two-tailed t test or the chi-square test. A P value of <0.05 was considered statistically significant.