The prostate stem cell antigen (PSCA) gene, which encodes a prostate-specific antigen (PSA), was identified as a gene involved in cell adhesion and proliferation. The associations between the PSCA rs2294008 and rs2976392 single nucleotide polymorphisms (SNPs) and gastric cancer (GCa) susceptibility were still controversial. To derive a more precise estimation of the associations, we conducted a case-control study of 1,124 cases and 1,192 controls in an eastern Chinese population. We found that the rs2294008T variant genotypes were associated with an increased GCa risk in this study population (CT vs CC, OR=1.59, 95% CI=1.33-1.89 and CT+TT vs CC, OR=1.38, 95% CI=1.17-1.62). For SNP rs2976392, the variant A genotypes were also associated with an increased GCa risk (AG vs GG, OR=1.61, 95% CI=1.35-1.91 and AG+AA vs GG, OR=1.47, 95% CI=1.25-1.74). The results were further validated by a meta-analysis. In conclusion, the results indicated that the PSCA rs2294008 T and rs2976392 A alleles were low-penetrate risk factors for GCa in this study population. However, large and well-designed studies are warranted to validate our findings.

Gastric cancer (GCa) is the most frequently occurring cancer and one of the leading causes of cancer-related deaths. There were 951,600 new GCa cases and 723,100 deaths in 2012, accounting for 8% of the cancer cases and 10% of cancer deaths in the world, respectively [1]. Therefore, GCa has become a major public health challenge. While the mechanism of gastric carcinogenesis is still not fully understood, it has been suggested that environmental factors and low-penetrance susceptibility genes may be important in the etiology of GCa. A high rate of Helicobacter pylori(HP) infection might be a potential risk factor for an increased GCa risk in developing countries (70-90%) than in developed countries (25-50%) [2, 3]. However, only few HP carriers will develop GCa; therefore, other factors must play a role in GCa risk. Lifestyle factors such as tobacco smoking, alcohol use and dietary habits are also likely to be potential risk factors for GCa [4]. Although genetic factors for GCa risk are still not fully understood, some recent success in identifying significant associations between genetic variants and GCa risk is encouraging [5-9], and it is necessary to confirm those genetic factors that have been reported to play a role in GCa risk.

The prostate stem cell antigen (PSCA) gene, which encodes a prostate-specific antigen (PSA), was identified as a gene involved in cell adhesion, proliferation and patient survival [10, 11]. PSCA is mainly expressed in the region of isthmus/neck, but its expression was undetectable in GCa tumor tissues [12], suggesting a loss of tumor-suppressor effect of PSCA in GCa. In addition, its biological role in cancer advancement was also reported by published in vivo functional studies [13, 14]. Therefore, it is necessary to investigate the role of PSCA genetic variants in the etiology of GCa. Importantly, several GWAS studies have demonstrated an association between PSCA variants and cancer susceptibility [13, 15, 16]. One GWAS study in Korea and Japanese populations reported that two SNPs in the PSCA gene (rs2294008 C>T and rs2976392 G>A) were associated with an increased GCa risk [13]. However, these associations were not replicated in the subsequent replication studies [17, 18].

To further confirm the associations between PSCA rs2294008 and rs2976392 SNPs and GCa risk, we conducted a replication study in a large eastern Chinese population and also performed a meta-analysis with published studies.

Baseline characteristics of individuals included in this study were consistent with those described in our previous study [19], but one sample in cases and four samples in controls failed to be genotyped. Thus, the final analysis included 1,124 GCa patients and 1,192 cancer-free controls (Supplemental Table 1). Subjects were well matched by age and sex with more smokers and drinkers in the controls, but these variables were further adjusted in the following multivariate analysis. The rs2294008 and rs2976392 appeared to be in a high linkage disequilibrium (r2 = 0.969). 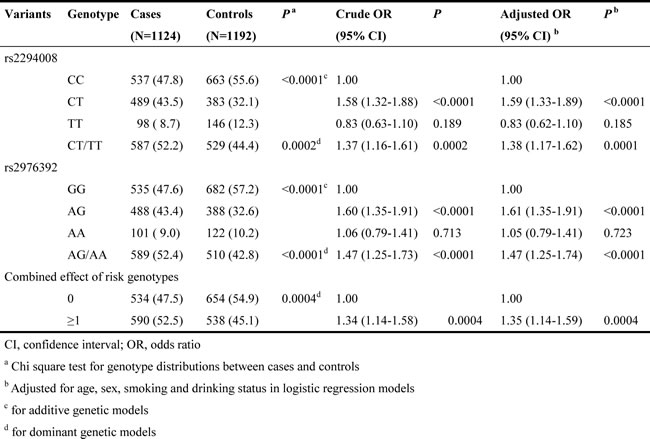 Table 2: Stratification analysis for the associations between selected PSCA polymorphisms and GC risk in an eastern Chinese population 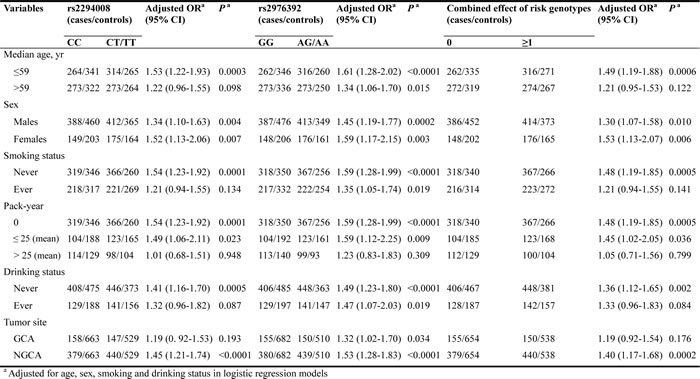 Table 3: Meta-analysis results for the associations between PSCA SNPs and GCa risk 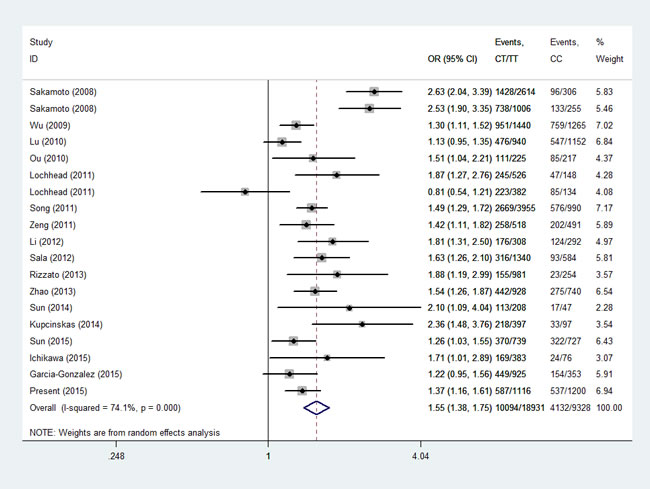 Figure1: Meta-analysis for the association between PSCA rs2294008 SNP and GCa risk in a dominant genetic model. 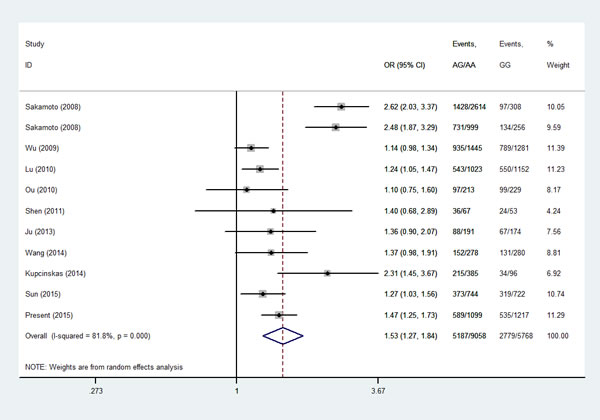 Figure 2: Meta-analysis for the association between PSCA rs2976392 SNP and GCa risk in a dominant genetic model.

In addition to environmental and lifestyle factors for GCa risk, genetic factors are also important in identifying at-risk populations for prevention of GCa. Although PSCA is mainly expressed in the isthmus/neck region of the stomach where the GCa often occurs [13], it is interesting that PSCA expression is suppressed in GCa tumor tissues. Moreover, it was reported that the expression of PSCA may be coming from some proliferating precursor cells [43]. These findings suggested that PSCA is a potential tumor suppressor in GCa. Therefore, it is biologically plausible that SNPs that lead to down-regulate expression of PSCA make individuals predisposed to GCa. This speculative hypothesis is consistent with or supported by our results that the PSCA rs2294008 T and rs2976392 A alleles were associated with an increased GCa risk in the study population. More importantly, these associations were further validated by our meta-analysis with pooled data from all the published studies. Also, results of most pooled data were considered to be robust by sequential meta-analysis, except for rs2294008 with heterogenous results across studies (I2=95.90%).

However, it was surprising that GCa risk for the subgroups of PSCA homozygotes (TT for rs2294008 and AA for rs2297692) were not statistically significant. This may be explained by a co-dominant genetic model, in which only the imbalanced paired protein subunits coded by the two different alleles will have an effect on the proteins’ functions; alternatively, the variant homozygotes may have experienced embryo lethal events, leading to a high rate of abortions; lastly, this finding may be simply due to chance, because of a systemic error in genotyping or because the small sample size of the subgroup may have insufficient statistical power to detect a weak effect or may have generated an unstable risk estimate. All these speculations should be further explored in future larger and mechanistic studies. Therefore, our results should be interpreted with caution.

There are some limitations in the present study. First, although age, sex, smoking and drinking status, and tumor site were taken into consideration for subgroup analysis, other important risk factors such as diet and HP infection, which were missing in this study, might also contribute to the etiology of GCa. Second, new classification of GCa tumor types, which was not available for the patients diagnosed years ago, is also important, which may have a different genetic basis in the etiology. Third, the sample size of the cases in subgroups was largely reduced in the stratification analysis, which may have led to limited statistical power in subsequent analysis.

In summary, our results indicated that the PSCA rs2294008 T and rs2976392 A alleles may be low-penetrate risk factors for GCa. However, future studies should incorporate diet, HP infection status and Lauren classification to better understand the associations between the PSCA SNPs and GCa risk.

This study included GCa patients and cancer-free controls who were part of our ongoing molecular epidemiology study as described previously [19-21]. Briefly, 1,125 unrelated ethnic Han Chinese patients with newly diagnosed and histopathologically confirmed primary GCa were recruited from Fudan University Shanghai Cancer Center (FUSCC) in eastern China between January 2009 and March 2011. Patients other than histopathologically confirmed primary GCa were excluded. In addition, 1,196 age and sex-matched cancer-free ethnic Han Chinese controls were recruited from the Taizhou Longitudinal (TZL) study conducted at the same time period in eastern China as described previously [22]. Blood samples of GCa patients and cancer-free controls were provided by the tissue banks of FUSCC and the TZL study, respectively. All subjects had signed a written informed consent for donating their biological samples to the tissue banks for scientific research. Demographic data and environmental exposure history of each subject were collected. The overall response rate was approximately 91% for cases and 90% for controls. This research protocol was approved by the FUSCC institutional review board.

Using to a standard protocol, we extracted genomic DNA from peripheral blood samples. The rs2294008 and rs2976392 SNPs were genotyped by the TaqMan assay with the ABI7900HT real-time PCR system as reported previously [19]. Subjects’ case-control status was unrevealed in the genotyping process. As recommend by the company, four negative controls (without a DNA template) and two duplicated samples were included in each of 384-plates for the quality control. The assays were repeated for 5% of the samples, and the results were 100% concordant.

To further validate our results, we also performed a mini meta-analysis with studies searched from Medline, PubMed and Embase. Principles in search terms and inclusion and exclusion criteria were basically in accordance with previous studies [23, 24]. All primary reports were carefully reviewed, and the relevant references in these papers were also manually searched and reviewed by two independent authors. Then, data were retrieved form included studies and pooled ORs for heterozygous, homozygous, and dominant models were calculated. Heterogeneity among studies was estimated by Chi-square-based Q test. A P value greater than 0.10 for the Q-test indicates a lack of heterogeneity among studies, so the pooled OR estimate of the each study was calculated by the fixed-effects model (the Mantel–Haenszel method). Otherwise, the random-effects model (the DerSimonian and Laird method) was used [25]. To validate the stability of the pooled results and find the sources of heterogeneity, we performed the leave-one-out sensitive analysis. Publication bias was shown by the funnel plot, in which the asymmetry was estimated by the Egger’s liner regression test, where the statistically significant publication bias was tested out when a P<0.05 determined by the t test was suggested by Egger. All the statistical processes were achieved by using STATA version 10.0 (Stata Corporation, College Station, TX). Whether results were conclusive could not be answered by traditional meta-analysis without keeping and balancing the type I and type II error. To address this problem, studies included in this meta-analysis were analogous to interim randomized controlled clinical trials. Sequential meta-analysis (SMA) was conducted to calculate the required information size in this meta-analysis. Lan DeMets sequential monitoring boundary was established to control the type I and II error by alpha and beta-spending function methods. Whether the monitoring boundary was crossed was used as a way to estimate the reliability of the results acquired from traditional meta-analysis. All steps were accomplished with the TSA software version 0.9.

3. Ishaq S and Nunn L. Helicobacter pylori and gastric cancer: a state of the art review. Gastroenterology and hepatology from bed to bench. 2015; 8:S6-S14.