Too much AKT turns PAX3-FKHR dead: A prospect of novel therapeutic strategy for alveolar rhabdomyosarcoma

Alveolar rhabdomyosarcoma (ARMS) is the aggressive subtype of muscle cancer in the pediatric population and children with ARMS have significantly poor prognosis and frequently present metastasis [1]. More than 80% of ARMS have chromosomal translocation t(2;13) generated novel fusion transcription factor PAX3-FKHR in which the DNA binding domain of PAX3 is fused to the carboxyl terminus of FKHR [1]. PAX3-FKHR protein acts as a potent transcriptional activator and influences expression of genes that ultimately contribute to its oncogenic behavior by modifying cell growth, migration, apoptosis, and muscle differentiation [1]. Fusion-positive PAX3-FKHR status in patients correlates with worse outcome and displays a more aggressive clinical phenotype that is consistent with cell lines and mouse models of ARMS [1]. Therefore, inhibiting PAX3-FKHR activity, a potential Achilles’ heel, is a sound therapeutic strategy to eliminate ARMS cells that have benefit to children with this disease. 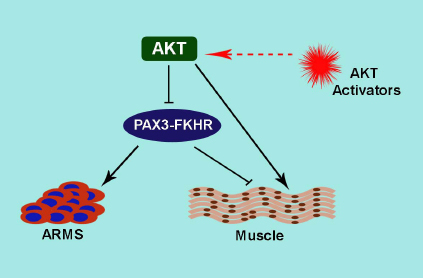 Our study revealed the unexpected finding that elevating AKT activity can inactivate PAX3-FKHR in ARMS cells [2]. This is important because it shows that acute activation of AKT inactivates PAX3-FKHR activity known to be involved in development and metastasis of ARMS. This new discovery poses a host of new questions and challenges that activator-induced AKT activation may hinder PAX3-FKHR activity, thus offer a therapeutic benefit to ARMS. Dilling et al. showed that cell lines derived from childhood ARMS are very sensitive to the growth-inhibitory effects of the rapamycin [7]. Rapamycin induced feedback activation of AKT is well documented [8]. Therefore, sensitivity of ARMS cells to rapamycin may result in AKT activation induced inhibition of PAX3-FKHR activity. In a similar way, activation of AKT may provide a therapeutic benefit in other cancers. In this case, we may envision the potential benefit of AKT activation by TNF-α, which is used in the regional treatment of locally advanced soft tissue sarcomas, metastatic melanomas and other unresectable tumors [9]. Constitutive PI3K/AKT activation in AML patients showed a better prognosis [10], indicating a potential function of AKT activation in clinical success of cancer treatment. A characteristic abnormality of ARMS cells is a blockade of terminal differentiation. A strategy of inducing ARMS cells to differentiate, termed ‘differentiation therapy’ is an elegant alternative that could limit the current toxic therapeutic approach. The bi-transgenic AKT1 and ErbB-2 developed mammary tumors exhibit more differentiated phenotypes than ErbB2 alone [5]. This study suggests that AKT could promote tumor differentiation in certain setting. PAX3-FKHR abolition in ARMS cells led to terminal differentiation [1], therefore, it is worth considering the potential role of AKT activation-dependent inactivation of PAX3-FKHR in this effort (Fig. 1). Taken together, we venture that acute AKT activation should be evaluated for therapeutic benefit in ARMS and also in certain types of tumor.