Thrombopoietin: a potential diagnostic indicator of immune thrombocytopenia in pregnancy

Thrombopoietin (TPO), the ligand of c-Mpl protein, is the major physiological regulator of megakaryocyte maturation and platelet production.[1, 2] TPO enhances megakaryocyte colony formation; increases the size, number and ploidy of developing megakaryocytes; and results in increased platelet production.[3, 4] In turn, platelets become desialylated as they circulate and age in blood, the desialylated platelets bind to the hepatic Ashwell-Morell receptor (AMR) and induce hepatic TPO gene transcription and translation.[5] TPO is expressed mainly in liver, and cleared from the circulation blood by binding to the c-Mpl ligands on platelets, megakaryocytes and their progenitors.[6] With a largely constitutive hepatic TPO production, the circulating TPO level is controlled by the total cell mass of the megakaryocyte lineage that expresses c-Mpl receptor.[7]

The platelet counts and TPO levels for the different patient groups and for the healthy controls were summarized in Table 1 and Figure 1. 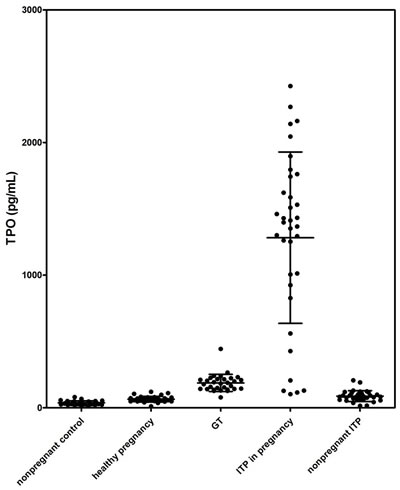 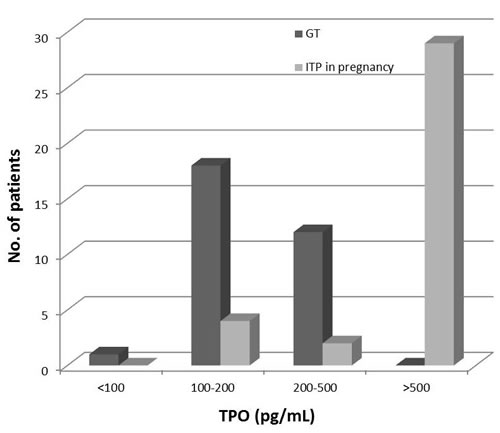 Table 2: Data on ITP patients included in this study

Our study demonstrated that TPO levels of ITP in pregnancy patients are extremely elevated and significantly higher than those of GT patients. Thrombocytopenia is relatively common in pregnancy. The main causes of thrombocytopenia in pregnancy can be divided into gestational thrombocytopenia (75%), secondary to hypertension disorders (15-20%), and immunological disorders of pregnancy (3-4%).[16-18] Disorders like preeclampsia, HELLP syndrome, acute fatty liver, disseminated intravascular coagulation, thrombotic thrombocytopenic purpura, and hemolytic uremic syndrome can be diagnosed based on abnormal clinical and laboratory findings. Furthermore, thrombocytopenia may also be the primary manifestation of viral infections or adverse reaction from many drugs and supplements, which should be carefully differentiated by history taking and laboratory examinations.[19] However, as for ITP first presenting in pregnancy and GT, they have often been inadvertently confused in clinical practice.[20] In the case of otherwise asymptomatic thrombocytopenia first presenting during pregnancy, bone marrow aspiration is not routinely performed. Hematologists and obstetricians differentiate ITP from GT mainly based on onset time and platelet count.[20] Significant thrombocytopenia in the first or early-second trimester of pregnancy, with a declining platelet count as gestation progresses, is most consistent with the diagnosis of ITP. In contrast, mild thrombocytopenia developing late in the third trimester and not associated with hypertension or proteinuria is usually diagnosed as GT, in which cases the platelet count rarely drops below 70,000/μL.[9] However, early onset thrombocytopenia and nadir platelet counts of less than 70,000/μL can also be seen in more severe forms of GT, and mild types of ITP may present platelet counts higher than 70,000/μL, in which case these two disorders become indistinguishable. As the most common cause of thrombocytopenia in pregnancy, GT appears to have no adverse effect on either the mother or the fetus, and it resolves spontaneously within 1 to 2 months after delivery.[21] Conversely, ITP in pregnancy may lead to bleeding complications in both mothers and their infants.[12, 13] Besides the possible hemorrhage of ITP patients during delivery or post-partum, the neonates of mothers with ITP may also develop thrombocytopenia, as a result of the trans placental passage of maternal antiplatelet IgG.[22] It is necessary to observe the conditions of ITP patients closely and provide proper care and treatment. Therefore, accurate differentiation of ITP in pregnancy from GT is of crucial importance in clinical practice. We showed in the study that the TPO levels of ITP in pregnancy patients were significantly higher compared to those of GT patients. The significance becomes obvious when patients are ranked according to TPO level. (Figure 2) In our study, 29/35 ITP in pregnancy patients had TPO values > 500 pg/mL, but none of the GT patients’ TPO level exceeded 500 pg/mL. These results indicate that measurement of the TPO level may give additional information in differentiating ITP from GT. Patients with TPO levels of 500 pg/mL or over need to be examined and observed carefully, since the thrombocytopenia is more likely to be caused by ITP.

TPO levels in pregnant and nonpregnant ITP patients were significantly different despite equivalent platelet counts. Numerous studies over the past 2 decades have documented that TPO levels are high when thrombocytopenia is due to megakaryocyte deficiency and low when it is due to increased platelet destruction.[15, 23, 24] The serum TPO levels are regulated by both circulating platelets and bone marrow megakaryocytes. In thrombocytopenic patients with bone marrow hypoplasia, circulating TPO levels are characteristically high due to low amount of total c-Mpl expressing cellular mass and therefore defective uptake of TPO. In contrast, despite similar degrees of thrombocytopenia, nonpregnant ITP patients have increased or normal bone marrow megakaryocyte numbers and the circulating TPO levels are relatively low. Taking the previously published studies and our data together, it could be inferred that the pathogenesis of ITP in pregnancy might be different from that of nonpregnant ITP. We hypothesized that there is megakaryocyte hypoplasia in patients of ITP in pregnancy. Based on this conjecture, we further performed bone marrow examinations of pregnant and nonpregnant ITP patients. Most of the nonpregnant ITP patients (17/27) had increased numbers of megakaryocytes, while the rest had normal numbers of megakaryocytes. Conversely, among 23 patients with ITP in pregnancy, 14 had decreased numbers of megakaryocytes, 5 had normal numbers and 4 had increased numbers of megakaryocytes. These data showed that more than half of the ITP patients in pregnancy underwent megakaryocyte hypoplasia. This finding needs to be replicated with a larger study. In addition, platelet glycoprotein-specific autoantibodies were determined in both pregnant and nonpregnant ITP groups. There was no significant difference in the frequency of platelet glycoprotein-specific autoantibodies between these two groups. We further analyzed the TPO levels in newly diagnosed ITP during pregnancy and chronic ITP diagnosed before pregnancy. In a total of 6 chronic ITP patients, TPO levels were lower than 500 pg/mL in 4 and higher than 500 pg/mL in 2 of them. In the 29 ITP patients first diagnosed during pregnancy, only 1 patient displayed TPO level of lower than 500 pg/mL, while the others had TPO levels significantly higher. After delivery, platelet counts slightly increased in most of the ITP patients, meanwhile, the TPO levels significantly decreased, indicating that the pathogenesis during and after pregnancy were different. Unfortunately, since only a limited number of patients had chronic ITP, it could not be determined whether there is a difference in the level of TPO in patients with newly diagnosed, persistent and chronic ITP in this study. Further research will be needed to make subgroup analysis in the future. Meanwhile, measuring of TPO levels in chronic ITP patients before, during and after pregnancy would be meaningful to further clarify the role of pregnancy in the course of ITP.

The healthy pregnant women presented slightly decreased circulating platelet numbers and increased TPO levels compared to the nonpregnant healthy controls, which is consistent with former studies.[25, 26] Platelet count decreases by an average of approximately 10 percent in uncomplicated pregnancies. The mechanisms of the decrease in platelet count are thought to be dilutional effects and accelerated destruction of platelets passing over the often scarred and damaged trophoblast surface of the placenta.[25] The elevation of the circulating TPO levels might be the physiological response to decreased circulating platelets, because the consumption of TPO by platelets decreases.

Gestational thrombocytopenia is characterized by decreased platelet count and increased platelet volume compared to healthy pregnancy. The precise etiology of GT remains unknown, but it has been suggested to be a result of various mechanisms, including hemodilution during pregnancy and increased activation and clearance of platelets.[8, 17] We found that serum TPO levels were elevated in GT compared to healthy pregnancies. This elevation is most likely to be compensatory due to the reduced platelet count.

Consistent with previous reports,[14, 15] the present study revealed mildly elevated TPO levels of patients with nonpregnant ITP compared to nonpregnant healthy controls. Although the circulating platelet counts of nonpregnant ITP patients were markedly lower than the healthy controls, the TPO levels were not as high as would be predicted by their platelet counts. Former reports have suggested that the relatively low TPO levels in ITP might be the result of preserved megakaryocyte mass in the bone marrow of patients with accelerated platelet destruction.[24, 27] With an increased number of c-Mpl positive megakaryocytes and continuous production of new platelets, the TPO uptake in nonpregnant ITP patients would not extremely decrease. In addition, Chang M et al[28] suggested that the platelets of ITP have a higher capacity to take up and degrade TPO.

There are some limitations in our study, including limited sample and sampling bias of single-centre study. Larger prospective multicenter studies are needed to further confirm our findings.

Blood samples were obtained from ITP in pregnancy patients, GT patients, healthy pregnant women, age-matched nonpregnant ITP patients, and nonpregnant healthy controls at Qilu Hospital, Shandong University. Inclusion criteria were: 1) female, 15 years to 49 years old; 2) no underlying disease before pregnancy or comorbidity during pregnancy for the pregnant individuals; 3) ITP or GT diagnosed according to the diagnostic criteria described previously.[9, 29] Nonpregnant ITP was diagnosed clinically as thrombocytopenia with normal or increased bone marrow megakaryocytes and no concurrent abnormality that could otherwise explain thrombocytopenia. Mild thrombocytopenia that first became apparent in the second to third trimester of pregnancy with exclusion of other causes of thrombocytopenia during pregnancy was diagnosed as GT. A diagnosis of ITP in pregnancy was made when the familial and personal history, physical examination and laboratory examinations did not suggest other etiologies for the thrombocytopenia, with exclusion of other autoimmune/immunodeficiency disorders, inherited thrombocytopenia, liver disease, drugs, aplastic anemia, myelodysplastic syndrome, malignancies, gestational thrombocytopenia, preeclampsia, HELLP syndrome, DIC, folate deficiency and antiphospholipid antibody syndrome. ITP patients (both pregnant and nonpregnant) who had been treated with recombinant human TPO or TPO-receptor agonist within 3 months were excluded. The ITP treatment information of pregnant and nonpregnant ITP patients within 30 days before sample collection was obtained. This study was approved by the Medical Ethical Committee of Qilu Hospital, Shandong University. Informed consent was obtained from each patient.

After clotting and centrifugation, serum samples were stored at -40°C until use. Thrombopoietin concentration was determined by using a commercially available ELISA kit (Quantikine Human TPO Immunoassay; R&D Systems, Minneapolis, USA) as previously described.[15] Briefly, 200 μL of recombinant human TPO standard, serum samples or blank were added in duplicates to the wells of a microtiter plate precoated with an anti-TPO monoclonal antibody. The plate was incubated for 3h at room temperature. After washing, 200μL of horseradish peroxidase conjugated anti-TPO antibody was added and incubated for 1h at room temperature. The color was developed by using tetramethylbenzidine as substrate. The reaction was stopped by adding 50 μL of acid solution to each well, and the absorbance was recorded at 450/650 nm wavelengths. The sample TPO concentration was calculated from the corresponding standard curve.

Platelet glycoprotein-specific autoantibodies were determined by modified monoclonal antibody specific immobilization of platelet antigens (MAIPA) assay as previously described.[31] An absorbance higher than the mean absorbance + 3 SD recorded for the controls was considered as positive.

The mean value ± SD is reported for continuous variables in the text, categorical variables are expressed as count and percentage. The probability of differences between unpaired variables being statistically significant was determined by ANOVA followed by Tamhane’s T2 post hoc test. P value < 0.05 was taken as the level of significance.

8. Burrows RF and Kelton JG. Incidentally detected thrombocytopenia in healthy mothers and their infants. The New England journal of medicine. 1988; 319:142-145.

11. Toltl LJ and Arnold DM. Pathophysiology and management of chronic immune thrombocytopenia: focusing on what matters. British journal of haematology. 2011; 152:52-60.