Epithelioid hemangioendotheliomas (EHEs) are malignant angiocentric vascular neoplasms composed of chains and cords of epithelioid endothelial cells distributed in a myxohyaline stroma [1]. EHEs affect patients of all ages and arise in virtually any body site. High-risk patients with large tumor sizes and frequent mitosis have a poorer disease-specific survival of 59% compared to 100% survival of patients whose tumors lacked these features [2].

However, it remains unclear if these two distinct chromosomal alterations, the WWTR1-CAMTA1 fusion and the YAP1-TFE3 fusion specifically, are mutually exclusive in EHEs. In this study, we assess TFE3 rearrangements in EHEs to verify the newly proposed classification system for EHEs and examine the details of the clinicopathological characteristics of TFE3 rearranged EHEs.

Upon microscopic examination, many cases were composed of chains and cords of epithelioid tumor cells distributed in a myxohyaline stroma (Figure 1, Supplementary Data 1). All of the tumors showed strong expression of CD31 or CD34 via immunohistochemistry, indicating that they were vascular tumors. Taken together, the diagnoses of these cases were consistent with EHE.

Next, we performed immunohistochemical staining of CAMTA1 and TFE3 (Figure 1 and Table 2). As a result, all of the EHEs demonstrated strong nuclear staining of CAMTA1. Additionally, TFE3 nuclear expression in tumor cells was identified in five out of 18 cases (27.8%). As previously described [6, 7, 11], we also found well-formed vascular channels in the five TFE3-positive EHEs on a microscopic examination. Because CAMTA1 expressions were also observed in the five TFE3-positive EHEs at the same time, we decided that other tests were necessary to determine expression status of CAMTA1 and TFE3 in EHEs. 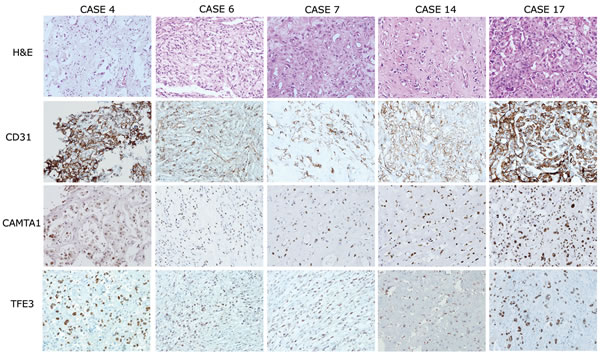 To verify TFE3 gene status, we performed FISH assays using TFE3 break-apart probes. We confirmed the presence of TFE3 gene translocations in the five EHEs that were immunohistochemically TFE3-positive (Figure 2A, upper panels). To ensure the presence of YAP1-TFE3 gene fusions, we performed RT-PCR using a YAP1 exon 1 forward primer and a TFE3 exon 6 reverse primer. YAP1-TFE3 fusion transcripts were identified in four out of five TFE3-positive cases (Figure 2B and Table 3).

In parallel with the YAP1-TFE3 gene fusion assessments, we examined CAMTA1 gene status. As before, we performed FISH assays using CAMTA1 break-apart probes in five EHEs that were immunohistochemically TFE3-positive (Figure 2A, lower panels). Unlike previous reports which claimed mutually exclusive occurrence of WWTR1-CAMTA1 translocation and YAP1-TFE3 gene fusion [6, 7, 11], tumor cells from the TFE3-positive EHEs showed separate signals, indicating the presence of CAMTA1 translocations. We performed RT-PCR using a WWTR1 exon 4 forward primer and a CAMTA1 exon 9 reverse primer, and, interestingly, four TFE3-positive EHEs produced WWTR1-CAMTA1 fusion transcripts (Figure 2B and Table 3). Unfortunately, we were unable to extract RNA in one last case; thus, we could not evaluate the presence of YAP1-TFE3 or WWTR1-CAMTA1 fusions via RT-PCR tests in this case. 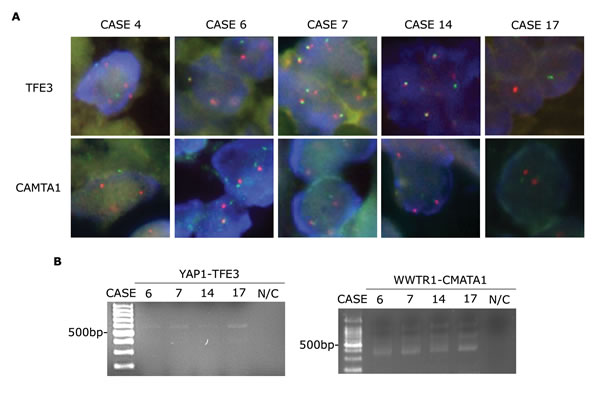 Next, we examined the 13 EHEs that were immunohistochemically TFE3 negative. FISH revealed that break apart occurred only within the CAMTA1 gene but not the TFE3 gene in these patients (Supplementary Data 2A). We repeatedly attempted to extract mRNA from these patients to perform RT-PCR but failed in 7 of 13 TFE3-negative EHE cases presumably due to mRNA degradation of the formalin-fixed, paraffin-embedded samples. RT-PCR of the other six cases from which we successfully extracted mRNA supported the presence of fusion transcripts of WWTR1-CAMTA1 genes but not YAP1-TFE3 genes (Supplementary Data 2B).

Table 4: Comparison of the clinical presentations of TFE3-positive and TFE3-negative EHEs

We compared the histologic features of EHE cases according to their TFE3 expression state but observed varying degrees of myxohyalinized stroma, tumor necrosis, mitotic activity, spindle and epithelioid cytologic features, and foamy and eosinophilic cytoplasm that seemed irrelevant to their TFE3 expression (P > 0.05, Table 5 and Supplementary Data 1). Similar to previous reports [6, 7], we observed well-formed vessels more frequently in TFE3-positive EHEs than in TFE3-negative EHEs (P = 0.0441). In addition, TFE3-positive EHEs tended to more frequently demonstrate high-grade nuclear atypia (P = 0.0654) and hypercellularity (P = 0.0987) than TFE3-negative EHEs, although the difference did not reach statistical significance.

Table 5: Comparison of the histologic features of TFE3-positive and TFE3-negative EHEs

A previous study examined CAMTA1 expression profiles in EHEs and identified strong nuclear expression in most cases [8]. Consistent with these findings, we also demonstrated strong nuclear expression of CAMTA1 in 100.0% of EHEs. In the current study, we were able to identify TFE3 nuclear expression in five out of 18 cases (27. 8%). This ratio is much lower compared with that of a previous article which claimed to have observed TFE3 nuclear reaction in as much as 87.5% (n = 21/24) in their EHEs study population [7]. Our data also differs in that they reported TFE3 rearrangement to occur in merely two cases (5.7%, n = 2/35) [7], whereas we detected YAP1-TFE3 gene fusion in 22.2% (n = 4/18) of EHEs and 80.0% (n = 4/5) of TFE3-positive EHEs based on FISH and RT-PCR results. EHE remains an extremely rare disease entity of which TFE3 expression has been scarcely examined. Although we add our current observations to the limited literature covering this subject, we acknowledge that subsequent studies which cover more cases are still required to further clarify such discrepancies, especially on TFE3 expression profile and YAP1-TFE3 gene fusion status that exist between our data and the previous report [7].

WWTR1 and YAP1 share conserved amino acid sequences for the WW domain that can interact with PDZ domains. They are named for the shared homology observed in postsynaptic density protein 95 (PSD95), Drosophila discs large tumor suppressor (Dlg1), and zonula occludens-1 protein (zo-1) [9]. Recently, a study described the mechanism of action of a WWTR1(TAZ)-CAMTA1 fusion oncoprotein, and the results suggested that the WWTR1-CAMTA1 fusion might cause resistance to anoikis and the oncogenic transformation of tumor cells [10]. This study implies that the WWTR1(TAZ)-CAMTA1 fusion oncoprotein might have a profound role in the molecular pathogenesis of EHEs. Despite the careful analyses reported in previous studies [6, 7, 11], questions still remain regarding how two very similar molecules could have different translocation partners in one specific tumor type. This concept will be examined in more detail in future studies.

In this study, we observed that TFE3-positive EHEs had a tendency to present as a single larger mass in younger patients compared with TFE3-negative EHEs and demonstrated histologic findings of the presence of high-grade nuclear atypia and hypercellular areas. We believe that these clinicopathologic findings in EHEs with both WWTR1-CAMTA1 and YAP1-TFE3 gene translocations, which were not identified in EHEs having only the WWTR1-CAMTA1 translocation, might reflect a higher degree of genetic heterogeneity in these tumors. Traditionally, sarcomas have been classified into two broad categories: tumors with simple genetic alterations and tumors with complex and unbalanced karyotypes [12]. Tumors with complex genetic alterations are typified by genome instability, resulting in multiple genomic aberrations in the genome of a single tumor and the heterogeneity of aberrations across tumors of a given type [13, 14]. Although two distinct chromosomal alterations specific to EHEs have been identified, we presume that these two genetic alterations can occur simultaneously in EHEs, possibly reflecting an increased degree of genetic instability.

According to a previous study, tumor size was associated with decreased survival of EHE patients and tumors with >3 mitotic figures/50 high power fields and size >3.0 cm had the worst prognosis [2]. Interestingly, we observed that TFE3-positive EHEs presented as single masses with significantly larger sizes compared to TFE3-negative EHEs, which typically contained multiple lesions of smaller sizes. These data, together with the above findings, have newly established two clinically distinct subgroups of EHEs: TFE3-positive and TFE3-negative EHEs, which can be used to more accurately diagnose and treat EHEs in the future.

This retrospective study was approved by the Institutional Review Board of Yonsei University Medical Center (approval number: 4-2014-0852). Our inclusion criteria defined a study population of 18 EHE patients who had been histologically diagnosed between 1993-2013. Archival tissues stained with hematoxylin and eosin (H&E) were reviewed by three pathologists (SK Kim, SJ Lee, and WI Yang).

FISH was performed on tumor sections after examination by H&E microscopy. A ZytoLight SPEC TFE3 Dual Color Break-Apart Probe (Z-2109-200, ZytoVision GmbH, Bremerhaven, Germany) and a MacProbeTM CAMTA1 Dual Color Break-Apart Probe (KH01M2NA12 and KH02M2NA12, Macrogen, South Korea) were used according to the manufacturer’s instructions for the detection of translocations involving the TFE3 gene at Xp11.23 and the CAMTA1 gene at 1p36.23, respectively. Break-apart on the slides was evaluated using an epifluorescence microscope (Olympus, Tokyo, Japan). During interphase in normal cells without translocations, green/orange fusion signals appear. Xp11.23 or 1p36.23 loci affected by translocations are indicated by separate and distinct green and orange signals. A case was interpreted as positive when at least 10 out of 50 counted tumor cells (20%) showed separated green and orange signals [7].

The authors declare that they have no conflicts of interest in the article.

2. Deyrup AT, Tighiouart M, Montag AG and Weiss SW. Epithelioid hemangioendothelioma of soft tissue: a proposal for risk stratification based on 49 cases. The American journal of surgical pathology. 2008; 32:924-927.