Lung cancer was the leading cause of cancer death worldwide [1]. It was divided into small-cell lung cancer (SCLC, comprising 20% of lung cancers), and non-small-cell lung cancer (NSCLC, comprising 80% of lung cancers). The global 5-year survival rates of NSCLC remained low, ranging from 10% to 15%[1]. NSCLC is characterized by the accumulation of multiple genetic alterations that results from the inactivation of tumor suppressor genes, activation of oncogenes, and epigenetic changes. Among all subtypes of NSCLC, adenocarcinoma was the most common type found in women and in non-smokers [2, 3]. Currently, surgery remains the gold standard for early stage NSCLC.

The receptor tyrosine kinase (RTK) super-family of cell surface receptors serves as mediators of cell signaling by extra-cellular growth factors [4–6]. ErbB family was one of RTK super-family. The ErbB family including EGFR (also known as ERBB1 or HER1), ERBB2 (also known as HER2), ERBB3 (also known as HER3), and ERBB4 (also known as HER4) had received much attention and their strong association with malignant proliferation had been investigated [6–9]. Activation of ErbB family proteins stimulates many intracellular signaling pathways such as MAPK and (PI3K)–AKT pathways [10, 11]. Other important ErbB signaling effectors are the signal transducer and activator of transcription proteins such as STATs [12], which often associates with EGFR activation [13], SRC tyrosine kinase, the activity of which is increased in response to EGFR and ERBB2 signalling [14], and mammalian target of rapamycin (mTOR), a serine/threonine kinase activates downstream of I3K—AKT and other growth regulators [15].

In this study, EGFR-activating mutation status and DNA copy number abundances of EGFR, ERBB2, ERBB3, and ERBB4 were measured in 261 surgically resected lung adenocarcinomas. In addition, the associations between DNA copy number abundances of above genes, EGFR-activating mutation status, and prognosis were explored. The findings of this study may provide potential biomarkers for drug response and prognosis of lung adenocarcinoma.

Extending previous observations of almost two decades ago [19, 20], recent retrospective analyses had reported EGFR overexpression in 62% of NSCLC cases, and its expression was correlated with DNA copy number abundance and poor prognosis [18, 21, 22]. Although DNA copy number abundance of EGFR and ERBB2 had been studied independently [23, 24], the associations between EGFR-activating mutations, whole ErbB family, and clinical prognosis in lung cancer were still needed to be investigated. 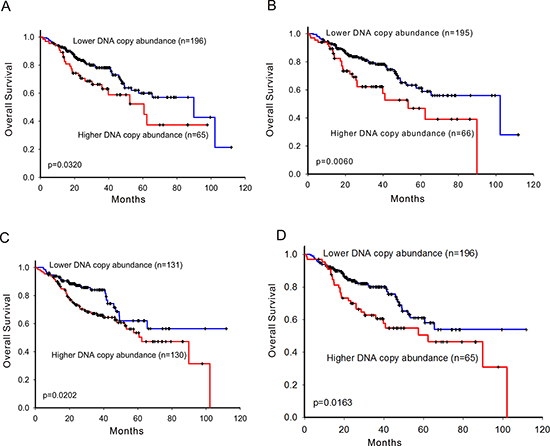 Figure 1: Survival prediction by DNA copy number abundance of ErbB family in 261 patients. Kaplan-Meier curves for overall survival analysis on A. EGFR, B. ERBB2, C. ERBB3, and D. ERBB4. High- and low-risk groups are divided based on copy number abundance. The optimal cut points were determined by sensitivity analysis which provided the largest discrepancy in overall survival between the low- and high-risk groups on the basis of the log-rank statistic, respectively.

We further investigated the associations between CNAs of ErbB family and overall survival in different EGFR-activating mutation types of patients. In the stratification analysis, 143 patients were grouped into EGFR-activating mutation carrier group (70 in L858R and 73 in exon-19-deletion) and 118 patients were grouped into EGFR wild type carrier group, respectively. In the wild type EGFR group, patients with higher CNA of ERBB2 significantly had shorten overall survival (Figure 2B) while those of EGFR, ERBB3, and ERBB4 did not (Figure 2A, 2B, and 2D). Multivariate Cox proportional hazards regression analysis also showed that ERBB2 was the only marginally significant prognostic factor in the wild type EGFR group (Table 2). This also implied that without driver mutations, such as EGFR-activating mutations, CNA of ERBB2 outperformed CNAs of other ErbB family as a prognostic factor. 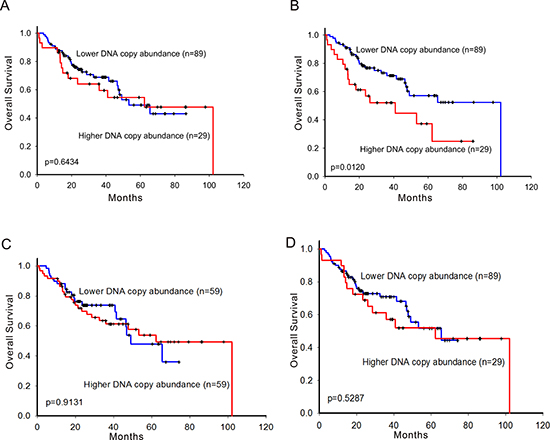 Figure 2: Survival prediction by DNA copy number abundance of ErbB family in 118 patients carrying wild type EGFR. Kaplan-Meier curves for overall survival analysis on A. EGFR, B. ERBB2, C. ERBB3, and D. ERBB4. High- and low-risk groups are divided based on copy number abundance. The optimal cut points were determined by sensitivity analysis which provided the largest discrepancy in overall survival between the low- and high-risk groups on the basis of the log-rank statistic, respectively.

In the EGFR-activating mutation carrier group, a different patterns was shown comparing with that in the wild type EGFR group. Patients with higher CNAs of EGFR, ERBB3, and ERBB4 significantly had shorten overall survival (Figure 3A, 3C, and 3D) while that ERBB2 did not (Figure 3B). Furthermore, EGFR, ERBB3, and ERBB4 were significant prognostic factors evaluated by multivariate Cox proportional hazards regression analysis (Table 2). Comparing with results in the wild type EGFR group, this may imply that ERBB2 showed different pattern with other members of ErbB family. 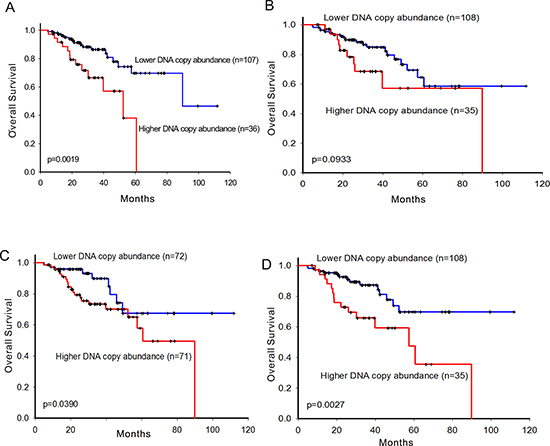 Figure 3: Survival prediction by DNA copy number abundance of ErbB family in 143 patients carrying EGFR-activating mutation. Kaplan-Meier curves for overall survival analysis on A. EGFR, B. ERBB2, C. ERBB3, and D. ERBB4. High- and low-risk groups are divided based on copy number abundance. The optimal cut points were determined by sensitivity analysis which provided the largest discrepancy in overall survival between the low- and high-risk groups on the basis of the log-rank statistic, respectively.

Sensitivity analysis was used to explore the optimal CNAs cut-point of prognosis for each gene respectively. The optimal cut-points varied from 50% to 75% in different genes. It was because that CNA was a continuous variable and higher CNA was trend to poor prognosis. Hence, when patients were di-categorized into two groups, it may toward to result in higher cut-off point. Nevertheless, a specific cut-points could be found to discriminate patients into high-risk and low-risk groups significantly having different overall survival time and CNAs of ErbB family were still potentially biomarkers of prognosis in lung cancer.

Although the basic structures of genes in the ErbB family are similar, each one has distinct properties, including variation in tyrosine kinase activity[26]. Except ERBB2, all other members of ErbB family showed significant associations between CNAs and prognosis in patients with EGFR-activating mutations. This may due to the biological role of ERBB2. ERBB2 did not directly bind to any known ligand and functioned as a co-receptor binding tightly to other ligand-bound ErbB receptor family members. Such heterodimer may stabilize the ligand binding and may enhance kinase-mediated activation of downstream signaling pathways [6–9].

All the lung adenocarcinoma patients underwent surgical resection from January 2001 to March 2009 in Taichung Veterans General Hospital. The lung tumor lesions were completely resected with lymph node dissection. Thepathological diagnoses were based on the 2004 World Health Organization histologic classification system [30]. TNM (tumor, node, and metastases) staging system was used according to the 6th edition of the American Joint Committee for Cancer (AJCC) staging system [31]. Only EGFR exon 19 deletion and L858R point mutation and EGFR wild type patients were included as other EGFR mutations were rare and heterogeneous. Patients with less than 3 months follow-up were excluded. This study was approved by the institutional review boards of Taichung Veterans General Hospital (TCVGH), with written informed consent from all patients.

The genomic real-time quantitative PCR (qPCR) was performed to measure DNA copy number abundance of each member of ErbB family. The primers and probes of qPCR were designed based on 500 franking nucleotide sequences (250 upstream and 250 downstream nucleotides) of the gene location. Fluorescence emitted by the reporter dye was detected in real time using the ABI prism 7900 sequence detection system (Applied Biosystem, Foster City, CA). Copy-number abundance (CNA) was defined as 2−ΔCt which represents the copy number fold-change between the target gene and the internal control gene GAPDH.

Clinical data collected including patient’s age, gender, stage, smoking status (nonsmoking defined as patients had never smoked), date of diagnosis, progression, death or last follow-up. Overall survival (OS) was calculated from the date of surgery to the date of death. Patients were classified into the high or low risk groups based on CNAs of ErbB family. The sensitivity analysis was performed to select the optimal cut-off point of the best group separation for each gene, respectively. We screened every 5% from 20% to 75% of CNAs as cut points to evaluate the trend of multivariate Cox proportional hazards regression p-values and found that they gradually descended form 20% to the optimal cut-off point, which p-value was firstly smaller than 0.05, in each gene (Supplementary Tables S1, S2, S3, and S4).

The stratified analysis was performed to analyze the DNA CNAs in 4 groups (L858R, exon 19 deletion, activating mutations, and wild type) of different EGFR mutation status. The Kaplan-Meier method was used to estimate survival curves and the difference between survival curves was evaluated by the log-rank test. Multivariate Cox proportional hazards regression with covariates age, sex, and stage was used to evaluate independent prognostic factors associated with overall survival. All tests were two-tailed and p values less than 0.05 were considered to be significant.

Integrated Core Facility for Functional Genomics and Pharmacogenomics Lab, and Mathematics in Biology Group of Institute of Statistical Science AS supported genomic, biological, and bioinformatics work.

27. Mitri Z, Constantine T and O'Regan R. The HER2 Receptor in Breast Cancer: Pathophysiology, Clinical Use, and New Advances in Therapy. Chemotherapy Research and Practice. 2012; 2012:7.