The molecular pathogenesis of myelodysplastic syndromes (MDS) remains poorly understood due to their high heterogeneity and complexity of the disease [1]. Recently, however, gene mutations involving epigenetic modifiers have been identified in MDS [2–5]. Further studies of epigenetic modifiers may help clarify the process of tumorigenesis in MDS [6].

Enhancer of zeste homolog 2 (EZH2) is a highly conserved histone methyltransferase that targets lysine 27 of histone H3 (H3K27) [7]. Methylated H3K27, especially trimethylated H3K27, is commonly associated with the silencing of genes involved in cellular development and differentiation [8]. Links between EZH2 and tumorigenesis have been described for various solid cancers [9–13]. Overexpression of EZH2 is frequently detected in cancerous tissues and is correlated with advanced stages of disease and with a poor prognosis. Several studies of hematopoietic system diseases have shown that EZH2 overexpression is involved in lymphoma and leukemia [14–16]. However, it is still debated whether EZH2 acts as an oncogene or a tumor suppressor gene (TSG) in MDS [17–19]. EZH2 mutations were identified in approximately 6% of MDS patients, and these mutations predict poor survival [3, 18, 19]. Nevertheless, most MDS patients do not carry EZH2 mutations, and the role of EZH2 expression in MDS pathogenesis remains unknown.

The homeobox (HOX) gene clusters encode a large family of highly conserved transcription factors that control cell fate during embryogenesis [20]. The expression of HOX gene clusters gradually decreases during hematopoietic cell maturation [21], which suggests that the HOX gene clusters may contribute to maturation defects in MDS clonal cells and pathogenesis. Because HOX gene expression is regulated in part by epigenetic mechanisms, the association between EZH2 and the HOX genes merits further investigation. Here, we examined the role of EZH2 in MDS pathogenesis and its relationship to HOX genes. 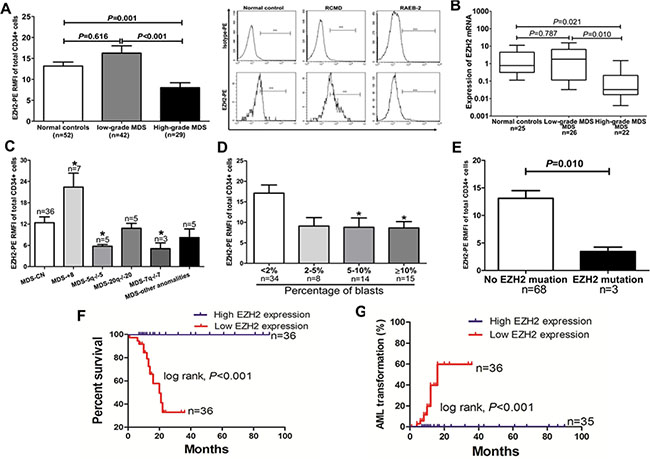 The EZH2 gene is located at 7q36.1, and 7q−/−7 is one of the most common karyotype abnormalities. As expected, a single nucleotide polymorphism (SNP) microarray showed that a copy number (CN) gain in the chr8 region and CN loss in the chr 7 and chr 5 regions were the most frequent cytogenetic events (Supplementary Figure S2). In 27 patients with normal karyotypes (identified by metaphase cytogenetics), the SNP array identified seven cases (25.9%) with CN loss and four cases (14.8%) with loss of heterogeneity (LOH) at the 7q36.1 locus (Figure 2A and 2B). Quantitative genomic PCR showed that CN loss at the EZH2 locus occurred more frequently in patients with 7q abnormalities, as determined both by SNP array and metaphase cytogenetics (MC), compared to patients without chromosome 7 abnormalities (p < 0.001; p < 0.001) (Figure 2C). Additionally, CN loss at the EZH2 locus was more common in patients with high-grade MDS than in those with low-grade MDS or normal controls (p = 0.003; p < 0.001) (Figure 2D). EZH2 DNA CN was positively correlated with EZH2 mRNA expression (Spearman’s r = 0.825, p < 0.001) (Figure 2E). Taken together, these results suggest that genomic loss of EZH2 leads to low EZH2 expression in MDS. 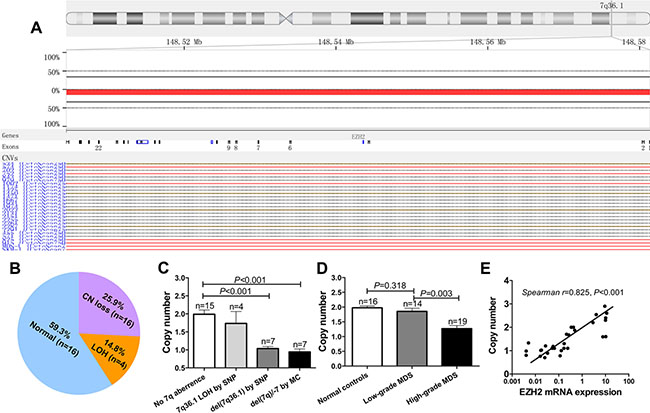 Expression analysis showed that EZH2 was overexpressed in MDS-L, SKM-1, K562 and U937 cells (Figure 3A). Because they had high EZH2 expression, possess characteristics of MDS clonal cells, and are suitable for lentivirus transfection, we used SKM-1 cells to perform a series of functional experiments. 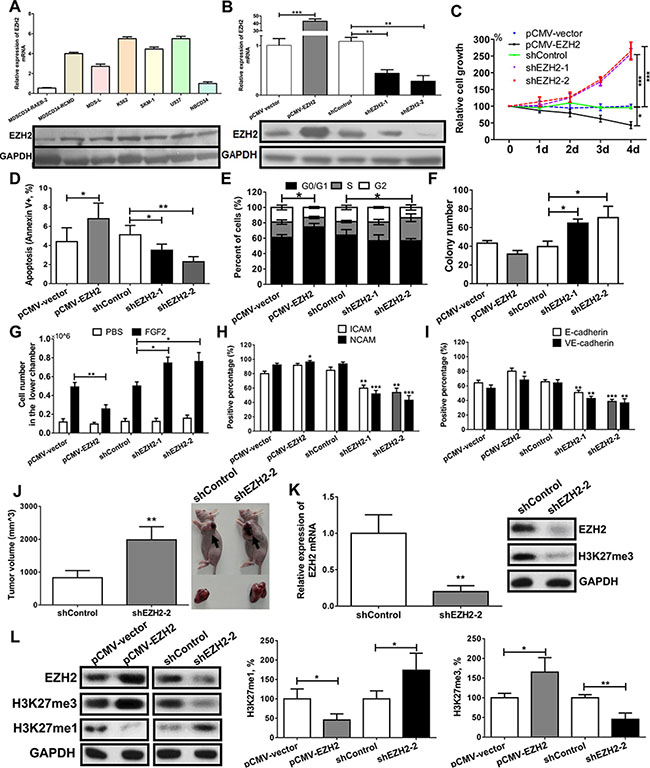 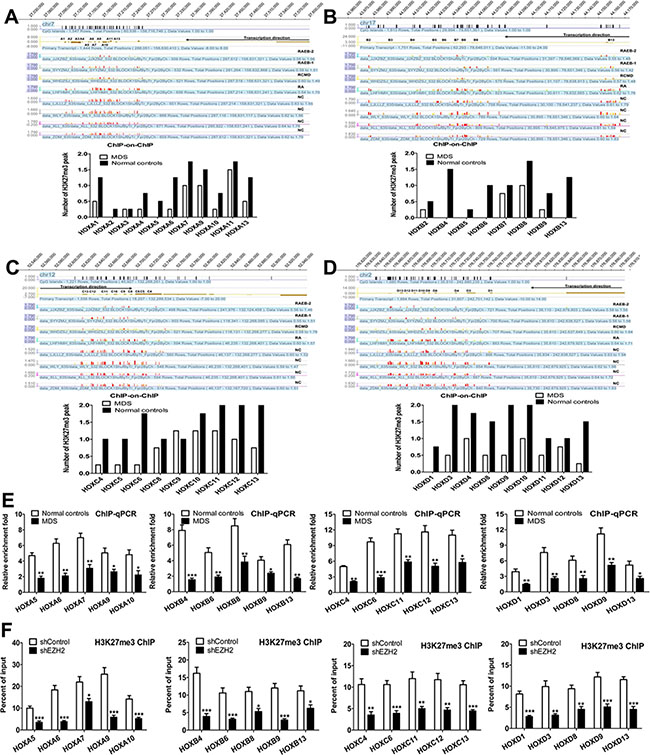 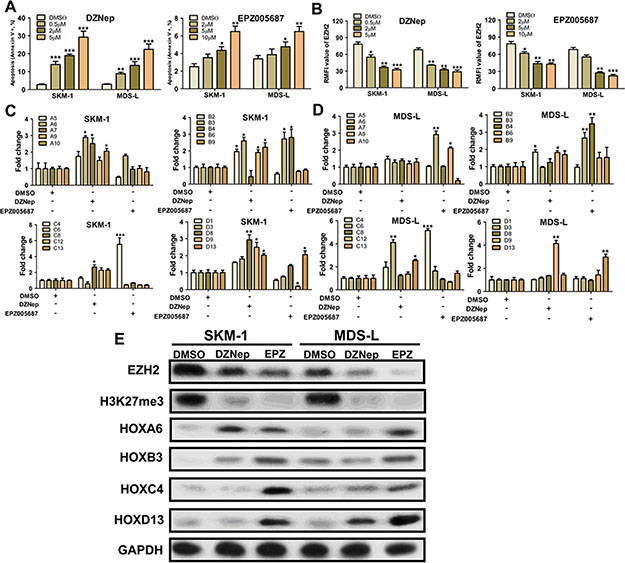 Our current data show that the low EZH2 expression observed in high-grade MDS patients is associated with shorter survival and increased AML transformation. Two other studies also found low EZH2 expression in high-grade MDS [22, 23]. However, previous research has also found that EZH2 overexpression is common and is associated with poor prognosis in solid cancers and leukemia [9–15]. EZH2 may therefore act as a tumor suppressor in MDS but as an oncogene in solid cancers and leukemia. The specific genetic environment of MDS cells might account for this difference in the effect of EZH2. An analysis that combined an SNP-array with MC revealed that approximately 30% of MDS patients, especially high-grade patients and those with MDS-derived AML, have a loss of heterozygosity in chromosome 7 [23]. We also detected 7q- abnormalities in many MDS patients (40%) using an SNP array. Because EZH2 CN loss (located in 7q36.1) is common in MDS, EZH2 overexpression may be rare in high-grade patients, while solid cancers and lymphoma are rarely associated with genomic lesions of EZH2. Genomic loss of EZH2 may therefore reduce the expression of EZH2 in MDS.

In addition to low EZH2 expression, we found that EZH2 mutations were also important in MDS pathogenesis. However, the effect of EZH2 mutations on H3K27me3 in MDS remains controversial. Some EZH2 mutations are considered to be inactive because they involve reduced H3K27me3 catalytic activity [19]. Other EZH2 mutations, including the EZH2 Y641 mutant, increase H3K27me3 catalytic activity in MDS and lymphoma [24–27]. Because EZH2 mutations often co-occur with chromosome 7 abnormalities, such as deletion and UPD, active and inactive EZH2 mutations may be secondary changes resulting from EZH2 deletion. Therefore, low EZH2 expression may contribute to MDS pathogenesis more than EZH2 mutations in MDS, which occur with lower frequency. In addition, a recent study revealed that SRSF2 mutations trigger mis-splicing of EZH2 and result in the degradation of EZH2 mRNA in MDS [28]. This genomic EZH2 insufficiency led to attenuated PRC2 function, which may impair the development of hematopoietic cells.

We found that EZP2 knockdown increased proliferation in SKM-1 cells and in a xenograft model, which is consistent with the clinical results. As discussed above and shown in the results, genomic EZH2 deficiency results in low EZH2 expression and genome-wide reductions in H3K27me3. The HOX gene cluster is activated during embryonic development and inactivated in adult cells through increases in the H3K27me3 chromatin mark [29]. Therefore, the loss of EZH2 facilitates tumorigenesis by activating the HOX genes cluster, although inhibition of epigenetic modifiers in solid cancers contributes to re-activation of TSGs and blocks cancer progression. This effect of decreased EZH2 levels on the HOX gene cluster is also reported in other studies [30, 31]. For example, EZH2 knockdown enhanced HOXA gene cluster expression in lymphoma cells. However, these results and our data suggest that the function of the HOX gene cluster differs in different hematopoietic malignancies. EZH2 activation and HOX inhibition predominate in lymphoma, while EZH2 inhibition and HOX gene activation are features of MDS. The biological effects of the EZH2/HOX axis may depend on its specific function in different cancers or in different disease stages within a single cancer type.

Some patients with MDS have benefited from treatments that affect epigenetic modifications. However, frequent relapses that are more difficult to treat are observed in MDS patients receiving epigenetic therapy [6]. In this study, we analyzed HOX gene cluster expression after treatment with H3K27 demethylating agent. Surprisingly, the histone demethylating agent increased HOX gene cluster expression despite increased cell apoptosis. However, accumulation of HOX gene cluster products may increase turbulent cell proliferation, which is not affected by epigenetic agents. The reversible nature of epigenetic changes suggests that reactivation of silenced oncogenes in MDS after epigenetic treatments, rather than the treatments themselves, may result in drug resistance.

In sum, our findings suggest genomic EZH2 loss contributes to epigenetic-dependent overexpression of the HOX genes in MD. But the consequences of altered EZH2 expression are complicated, and caution should be used when choosing treatments that may alter EZH2 levels.

A total of 97 MDS patients and 52 healthy volunteers were included in this study. Bone marrow mononuclear cells (BMNCs) from the MDS patients were separated with Ficoll-Hypaque gradient centrifugation, and CD34+ cells were isolated by MACS cell sorting according to the manufacturer’s protocol. SKM-1 and MDS-L cells were maintained in complete medium (RPMI 1640 supplemented with 10% heat-inactivated fetal bovine serum and 1% penicillin-streptomycin). Additionally, IL-3 (100 U/ml), which is essential for MDS-L cells, was added to their medium. Detailed descriptions of MDS patients are provided in the Supplementary Materials and Methods.

DNA from the MDS patients was prepared for hybridization with the Affymetrix CytoScan 750 K array (750,000 probes) according to the manufacturer’s protocol. Quantitative real-time PCR (QRT-PCR) was used to validate the SNP results. The detailed protocol is described in the Supplementary Materials and Methods.

pCMV-EZH2 and shEZH2 lentiviruses were purchased from TELEBIO (Shanghai, China). Transfection of SKM-1 cells was performed by mixing virus with cell suspensions followed by centrifugation at 30°C for 90 min with 5 mg/ml polybrene in medium. After viral transduction, colonies of cells with stable expression of EZH2, shEZH2, or a control shRNA were established in the presence of puromycin (10 mg/ml) in medium. The detailed protocol is described in the Supplementary Materials and Methods.

Measurements of cell proliferation, apoptosis, cell cycle status and colony formation were collected according to a previously published protocol [22]. The detailed protocol is described in the Supplementary Materials and Methods.

For cell migration, transfected cells were plated onto Transwell Permeable Support inserts with an 8-μm microporous membrane (Corning Costar, US). Culture medium containing recombinant human FGF2 was used as a chemoattractant in the lower compartment. Within 6–8 h, cells that migrated to the bottom membranes in the Transwells were counted in five random 100 × fields. Expression of adhesion biomarkers E-cadherin, VE-cadherin, ICAM, and NCAM on cell surfaces was determined using FCM in SKM-1 cells before and after transfection.

Transfected SKM-1 cells (2 × 107) were resuspended in 200 μl of D-Hanks and injected subcutaneously into the forelimbs of four- to six-week old nude mice (Balb/c, female). The animals were sacrificed and tumor tissues were acquired after three weeks. The tumor volume was calculated. Two mice were selected at random for use in each experiment, and each experiment was independently repeated five times. The study protocol was approved by the Committee on the Use of Live Animals in Teaching and Research at the Sixth Hospital affiliated with Shanghai Jiao Tong University.

H3K27me1 and H3K27me3 analyses were performed using the EpiQuik™ Global Histone H3-K27 Di/Tri-Methylation Assay Kit (Epigentek Group Inc., NY, US) according to the manufacturer’s instructions. The detailed protocol is described in the Supplementary Materials and Methods.

A GeneChip PrimeView Human Gene Expression Array (Affymetrix, US) was used for the GEM study. Differential gene expression profiles were identified among the normal controls (n = 6), the low EZH2 expression group (n = 6), and the high EZH2 expression group (n = 6). Similarly, differential gene profiles were analyzed among SKM-1 controls (n = 3), SKM-1 cells with EZH2 knockdown (n = 3), and SKM-1 cells with EZH2 overexpression (n = 3). By combining the GEM data from the MDS patients with the in vitro data from the cell lines, EZH2-targeted genes were identified. The detailed protocol is described in the Supplementary Materials and Methods.

The DNA pool from ChIP, the input control, and the IgG control were used for qPCR. PCR amplification was performed on an ABI 7500 real-time PCR machine (Applied Biosystems, Foster City, CA). The percentage input was determined using the 2(CtChIP-CtInput) × 100% method. Fold enrichment was calculated as follows: %(ChIP/Input)/%(IgG control/Input).