Results: PMP levels in plasma as enumerated by nanoscale flow cytometry are effective in distinguishing PCa patients with Gleason Score≥8 disease, a high-risk prognostic factor, from patients with Gleason Score≤7 PCa, which carries an intermediate risk of PCa recurrence. PMP levels were independent of PSA and significantly decreased after surgical resection of the prostate, demonstrating its prognostic potential for clinical follow-up. CTC subclasses did not decrease after prostatectomy and were not effective in distinguishing localized PCa patients from metastatic PCa patients.

A blood/urine based “liquid biopsy” for prostate cancer (PCa) could minimize the iatrogenic effects associated with needle core biopsies [1] and provide more accurate information regarding risk stratification. Prostate biopsies are needed because serum testing for Prostate Specific Antigen (PSA) is unable to distinguish patients with prostate cancer from patients with non-cancerous diseases of the prostate [2, 3]. Presently available “liquid biopsies” such as circulating tumor cells (CTCs) or fragments of tumor cell fragments (TCFs) as determined by the CellSearch Instrument are one such example, but these rely on epithelial markers that are not tissue specific [4]. CTCs are also rare in localized PCa disease [5], and therefore enumerating circulating TCFs by the CellSearch Instrument [4] or other high-throughput methods may be more appropriate for early stage disease.

Also known as prostate microparticles, these cell fragments taxonomically fall under the umbrella term, extracellular vesicles (EVs). The term “microparticle” is intended to represent entities that are 100-1000nm in diameter and released at the cell membrane whereas exosomes are EVs that are 40-100nm in diameter and are released by exocytotic mechanisms [6]. Microparticles have also been termed microvesicles, oncosomes, apoptotic bodies, ectosomes, prostasomes [7], with each of these terms providing etymologic clues regarding their origin and morphology. If released by the tumor, PMPs could conceivably express a subset of membrane-based biomarkers representative of the tumor’s biology, whereas exosomes do not. Therefore, a high-throughput and multi-parametric method is needed to enumerate prostate microparticles and its associated biomarkers for correlation to clinical outcomes. Flow cytometry best fulfills this requirement as it is able to analyze 104-105 events per second at a multiple channel basis. However, conventional flow cytometry is not equipped to analyze submicron events because the optics and detection schemas are only designed to detect light scatter from events larger than 3 microns.

Next generation instruments such as nanoscale flow cytometry are able to readily analyze events 100-1000nm in diameter using the same lasers and filters for analysis of multiple biomarkers on EVs such as PMPs in a high-throughput manner [8]. These improvements are largely due to enhanced optics designed to evaluate light scatter from submicron events and more sensitive photomultiplier tube (PMT) devices sensitive to fluorescence-based data generated by submicron entities [9]. No other instruments currently provide quantitative information of multiple biomarkers expressed on EVs. Therefore, nanoscale flow cytometry of EVs in plasma, serum, or urine [10] provides high-content information in a high-throughput manner. In this report, we describe its application with various sizing entities (calibration beads, liposomes), analysis of various sample types (cell culture media, plasma, serum), and the ability of nanoscale flow cytometry to enumerate PMPs defined as PSMA+ve events that exhibit a size range of 100-1000nm in diameter. Preparation of samples with probes for nanoscale flow cytometry is rapid and straightforward (Figure 1A). Applying this technology to retrospectively collected patient plasma samples with a median clinical follow-up of 3 years, we reveal that PMP levels are able to identify patients with Gleason Score 8+ disease from all other localized PCa patient cohorts, BPH patients, and healthy volunteers as well as patients with metastatic PCa disease. 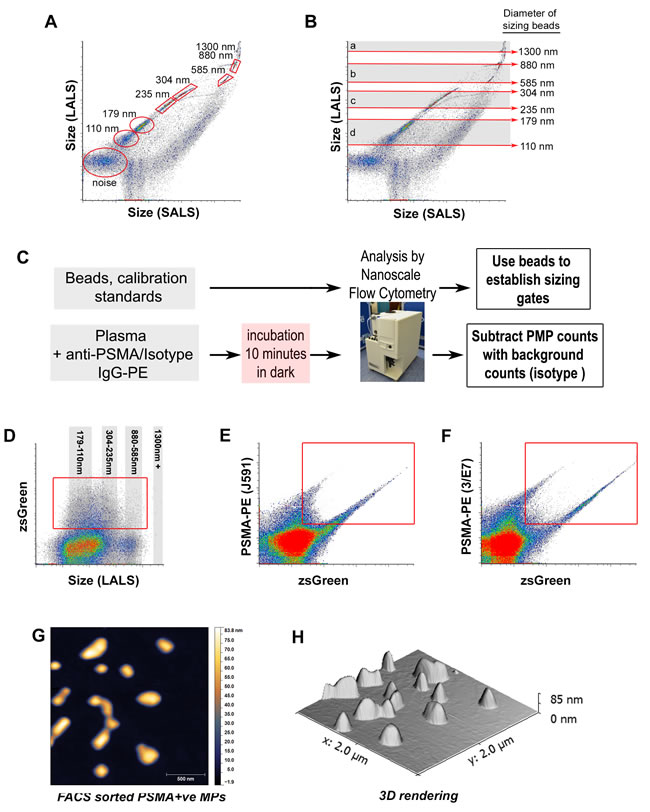 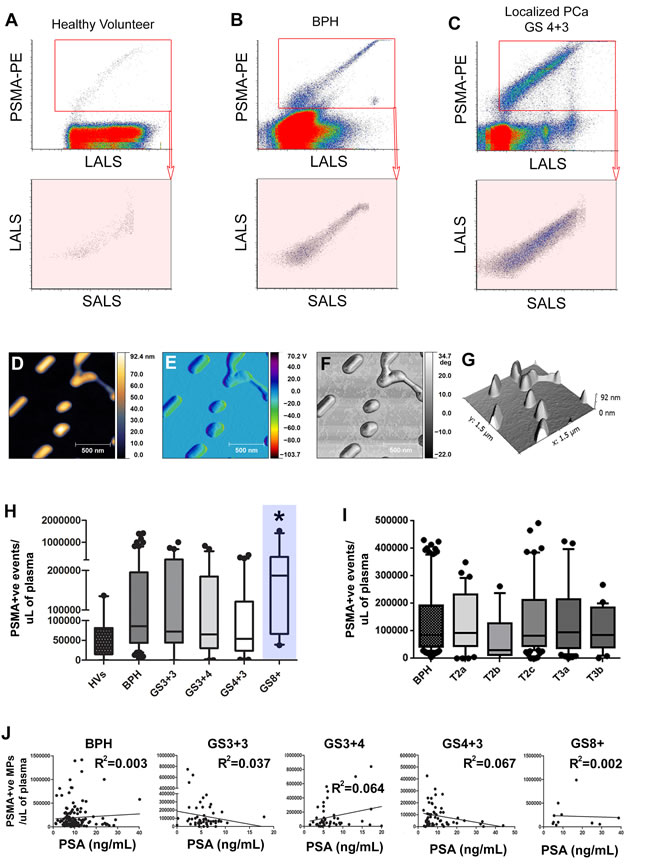 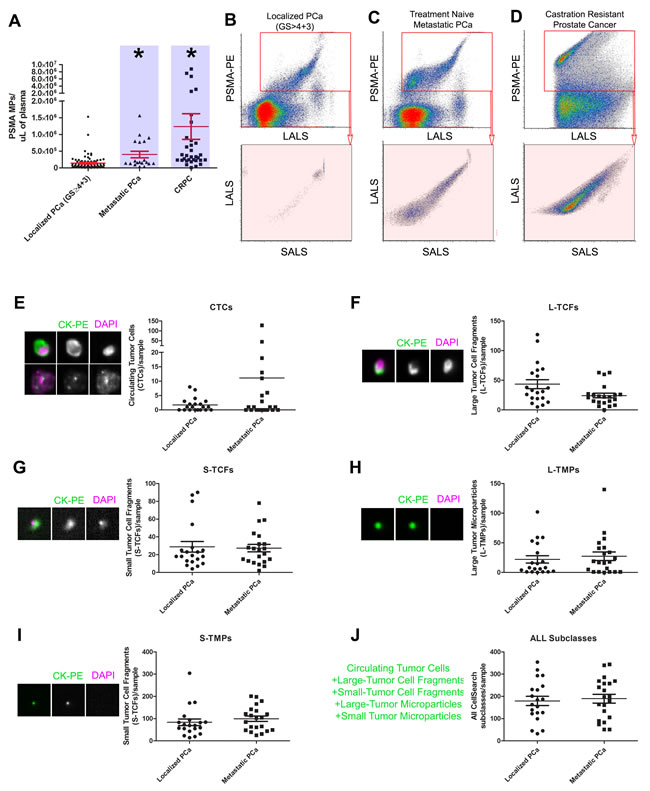 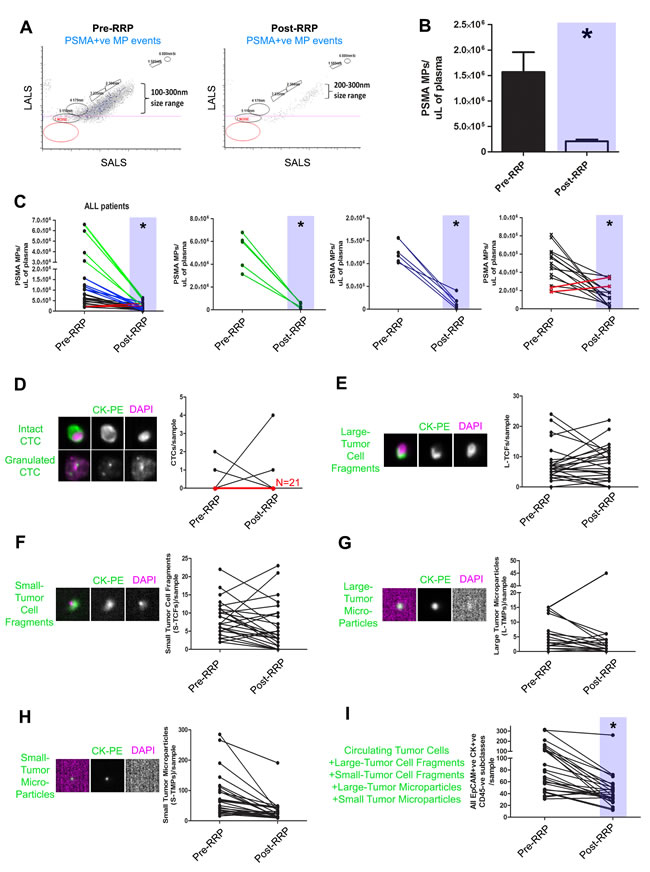 Figure 4: Decreases in prostate microparticle levels after prostatectomy as determined by nanoscale flow cytometry. PMPs (PSMA+ve MP events) were enumerated in plasma samples collected pre- and 3 weeks post-prostatectomy (RRP) in PCa patients (N = 25). Decreases in PMPs were observed in the majority of patients post-RRP A. and was significant compared to pre-op PMP levels B.. Decreases in PMP levels varied between various patients (C., left panel), and were stratified according to magnitude of decrease from pre-operative PMP levels (green, second left; blue, second from right; black and red, far right). Red lines indicate patients in which an increase in PMP levels was observed post-RRP. The same samples were submitted for CellSearch CTC analysis and all EpCAM+CK+CD45- subclasses were enumerated D.-I., revealing no trend except when all CellSearch events are analyzed in aggregate I.. * denotes p < 0.05, N = 25 all groups, Paired t-tests, two-tailed. 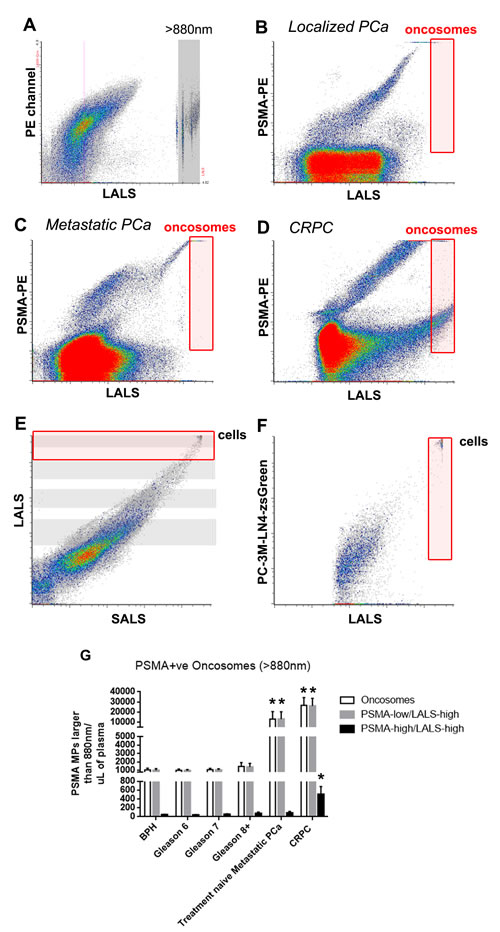 We present a “liquid biopsy” for cancer diagnostics and clinical followup which relies on enumeration of prostate microparticles in patient plasmas by nanoscale flow cytometry. Enumeration of PMPs in plasma is highly dependent on monoclonal antibodies specific for PSMA and were highest in Gleason Score≥8 patient plasmas, but no correlation was observed with other Gleason Score patterns nor with pathological tumor stages. Plasmas from metastatic and castration resistant prostate cancer patients exhibited significantly higher prostate microparticle levels and oncosomes levels than those from localized prostate cancer patients.

The biomarker used in these studies was PSMA but is likely not prostate-specific as it has been shown to be expressed in other tissues (salivary glands, duodenum, kidney) and even in tumor vasculature of numerous solid tumors [16, 17]. PMPs were observed in a subpopulation of healthy volunteer (HV) female patient plasmas, but these levels were significantly lower than those present in localized PCa patient plasmas. PMP levels could also be used for prognostication following prostatectomy if they remain high despite a PSA undetectable nadir state. In the majority of patients who underwent prostatectomy, a significant drop in PMP levels was observed at three weeks post prostatectomy, and in some cases, negligible prostate microparticle counts were observed thus demonstrating the effectiveness of prostatectomy in decreasing tumor burden. However, there were minimal changes in prostate microparticle counts in a minority of patients, whereas PSA levels were at an undetectable nadir at three weeks post-prostatectomy. This could suggest either microscopic residual local disease or occult metastases or that local invasion has occurred in these men. PSMA as a prostate-specific marker may not be ideal, but the observation of low to negligible counts of PSMA+ve microparticles in healthy volunteers as well as the significant decrease in PSMA+ve microparticles in patients post-prostatectomy reveals its clinical potential as a first generation biomarker for prostate cancer microparticles.

Unanticipated were the high PMP counts observed within the BPH cohort; initially we hypothesized that BPH plasmas would not exhibit high PMP counts based on previous findings in urine [18]. These new findings reveal potential mechanisms of EV release into the blood circulation, which may have overlap with how PSA is released by the prostate into the blood, levels which were also elevated in the BPH cohort. An additional biomarker that is cancer specific (over-expressed across various tumor types) which is present on the surface of the microparticle would likely decrease the number of prostate cancer microparticle events in healthy volunteer or BPH patient plasmas. This would take advantage of the capabilities of nanoscale flow cytometry to perform enumeration of dual-biomarker or triple-biomarker positive microparticle events (100-1000nm) in a high-throughput manner with minimal consumption of patient plasma samples. Overall, enumeration of prostate microparticles or oncosomes could be used to improve population screening methods but will require many prospective studies to determine the AUC, specificity, and sensitivity of such a blood test.

Prostate cancer (PCa) patient plasmas or serum samples were attained through the Ontario Institute for Cancer Research Tumor Bank and the University Health Network Genitourinary BioBank (Toronto, ON) under Western University Research Ethics Board (REB) approved Ethics Applications # 103156 and 103409. Only samples from patients with minimum 3 years follow-up were included to avoid patients that upstaged/upgraded during that time.

Whole blood for CTC Enumeration by the CellSearch Instrument (Janssen Diagnostics Inc.) was collected into CellSave vacutainers (10mL volume, Janssen Diagnostics Inc.). To prepare plasma from whole blood for prostate microparticle analysis, whole blood was collected in K2-EDTA Vacutainers (BD Biosciences Inc.) and spun at 1500×g’s for 10 minutes. The plasma layer was removed, aliquoted and then stored at -80˚C. To prepare serum, whole blood was collected in BD Serum Vacutainers (BD Biosciences Inc.) and left overnight at room temperature. The tube was then spun at 1500×g’s for 10 minutes and the serum layer was removed, aliquoted and stored at -80˚C.

Characterization of PSMA expression on microparticles generated from cell lines

LNCaP and PC3 cells (ATCC Inc.) were infected with lentivirus encoding cytoplasmic zsGreen protein (pLVX-zsGreen, Clontech Inc.). Cell pellets were resuspended in ddH2O and left for one hour at room temperature in the dark. The cells were spun down again at 1500×g’s for 5 minutes and the supernatant was reserved, aliquoted, and stored at -80˚C. To detect prostate microparticles, 1µL of anti-PSMA mouse IgG2b-PE (3/E7 clone, J591 clone, each 408.42µg/mL, mAb purification according to [11]) was added to 20µL of suspended microparticles and incubated at room temperature for 10 minutes in the dark. Samples were then diluted in 600uL of ddH2O and analyzed on the A50-Micro.

For microparticles generated in vitro, these were isolated by FACS as previously described in [12], in which PSMA+ve and zsGreen+ve co-expressing microparticle events were sorted onto cleaved mica coverslips (Ted Pella Inc. Redding, CA) to isolate prostate microparticles whilst eliminating non-target EVs and serum protein. After sorting 1000-3000 events onto the mica coverslips, samples were allowed to dry in 50 mL Falcon tubes for 5 minutes at 70°C before imaging with atomic force microscopy (AFM). No washing of the samples was performed. Images were acquired with tapping mode AFM (Dimension V, Veeco Inc.). Rectangle cantilevers with nominal spring constant of 40 N/m and tip radius of < 10 nm were used to acquire high resolution topographic images. All measurements were done at low driving force to avoid damaging samples.

Whole blood from patients at pre- and post-radical retropubic prostatectomy (3 weeks post) were collected into CellSave Vacutainers and then submitted to CellSearch Analysis. CTC counts for each blood sample were determined by two trained viewers and EpCAM+ve CK+ve CD45-ve CellSearch Subclasses were enumerated by an independent viewer relying on parameters established in [4].

Prostate cancer screening remains a significant clinical challenge due to the lack of an effective blood test that specifically identifies patients with intermediate-high risk prostate cancer. We propose the use of a next-generation biomarker platform that relies on the enumeration of prostate extracellular vesicles, also known as prostate microparticles (PMPs), as a “liquid biopsy” for prostate cancer. We have developed a high-throughput technique called nanoscale flow cytometry to enumerate PMPs in minute quantities of patient plasma samples or in post-PSA discard sera. This technique when used to analyze a large cohort of prostate cancer patients with varying PCa risk profiles, reveals that PMPs are highly abundant in most prostate cancer patients, with the highest levels of PMPs observed in patients with high-risk Gleason≥8 PCa and metastatic PCa. This blood test can also be used be used as a prognosticator for early PCa recurrence after definitive therapy such as prostatectomy.

7. Ronquist GK, Larsson A, Stavreus-Evers A, Ronquist G. Prostasomes are heterogeneous regarding size and appearance but affiliated to one DNA-containing exosome family. Prostate 2012; 72:1736-45.