To metastasize to distant organs, cancer cells exploit three major routes of dissemination: blood vessels, lymphatic vessels, and direct seeding into the body cavity [1]. In metastatic GC, direct seeding into the peritoneal cavity occurs in more than 55~60% of patients. The resulting peritoneal carcinomatosis is the most common and important clinical manifestation, leading to a poor prognosis [2, 3]. Once peritoneal dissemination takes place, it is regarded as incurable; it is seldom responsive to surgical resection and responds poorly to conventional chemotherapy regimens, which cannot cross the blood-peritoneal barrier [4]. Therefore, there is an unmet clinical need for the development of an effective therapy for peritoneal carcinomatosis, and it is important to comprehensively understand the molecular mechanisms involved in the peritoneal dissemination of GC cells.

Peritoneal carcinomatosis of GC is a complex and dynamic process involving multiple steps [5–7]. First, GC cells detach from a primary serosa-invasive tumor mass through the down-regulation of intercellular adhesion molecules, such as E-cadherin, and they then gain access to the peritoneal cavity [6]. Next, the free GC cells adhere to the distant mesothelium, the innermost monolayer of the peritoneum, through adhesion molecules such as CD44 and selectins. After this attachment, the GC cells invade the subperitoneal connective tissue under the guidance of motility factors and matrix metalloproteinases [5]. Later, GC cells activate angiogenesis by secreting VEGF, and they proliferate to develop seeding nodules through the regulation of autocrine and paracrine loops involving growth factors and chemokines produced by GC cells and stromal cells [6].

It is currently well recognized that the accumulation of genetic alterations and the subsequent acquisition of phenotypic traits is responsible for the metastasis of various cancers [8, 9]. However, because most studies have focused on cellular and phenotypic changes involved in peritoneal metastasis, the genetic alterations responsible for the acquisition of these phenotypic traits have been poorly elucidated.

Recent advances in next-generation sequencing have made whole-exome sequencing not only cost-effective but also technically feasible [10]. In particular, it is now possible to perform a genome-wide analysis of peritoneal carcinomatosis with small amounts of DNA obtained from malignant ascites, which is the most easily obtainable sample for metastatic GC by a simple paracentesis.

Six of eight patients were diagnosed as diffuse-type GC with histological features that are consistent with poorly differentiated adenocarcinoma, whereas two patients were intestinal-type GC (Figure 1A). All patients had an advanced disease stage at the initial presentation (stage III or IV in AJCC 7th staging system) and received curative or palliative gastrectomy (Figure 1A). At the time when their diseases became metastatic or recurrent, all patients had clinically distinct peritoneal carcinomatosis with cytologically confirmed malignant ascites (Supplementary Figure 1). The median time from surgery to recurrence was 3 months (range 0.7–50.9 months), and the median overall survival duration was 13.4 months (range 3.6–54.7 months) (Figure 1B). 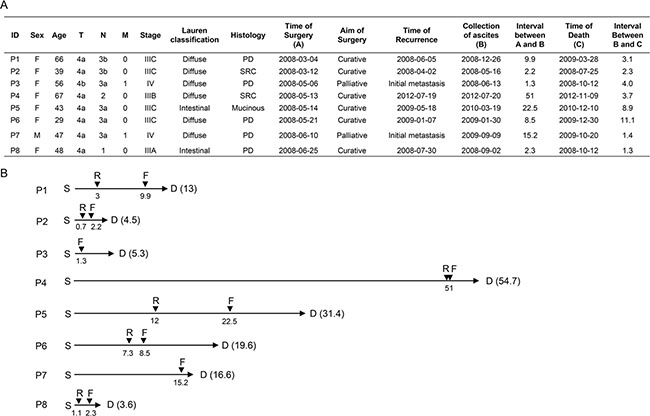 To explore somatic mutations involved in GC peritoneal carcinomatosis, we analyzed whole-exome sequences of 24 tissue samples that consist of triplets of normal gastric tissues, primary tumors, and malignant ascites from eight GC patients. Mutations identified are listed in Supplementary Table 1 and 2. When tumor purity was mathematically estimated using ASCAT v2.1, the average tumor purity was 24.0% in primary tumors and 45.5% in malignant ascites. The highly infiltrative feature of advanced diffuse-type GC may result in the low tumor purity, especially in primary tumors [11]. Our observation that the number of mutations in primary tumors significantly correlated with the average VAF (Supplementary Figure 2, r = 0.74, P = 0.037) may indicate that our mutation analysis may, in part, be affected by low tumor purity. 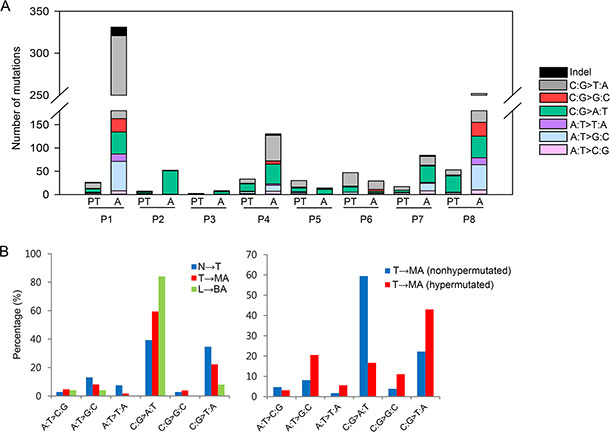 Somatic mutations and their clinical associations

Some mutations found in malignant ascites would be associated with poor disease prognosis because tumor cells harboring these mutations overcame multiple metastatic barriers. Therefore, we tested whether the increased number and VAFs of mutations in malignant ascites correlate with survival duration after peritoneal carcinomatosis (the length between F and D in Figure 1B). The number and VAFs of mutations in the malignant ascites showed a mild negative correlation trend with overall survival duration after peritoneal carcinomatosis (Supplementary Figure 5E and 5F). These negative correlation trends were not observed with mutation profiles of primary tumors (Supplementary Figure 5G and 5H). 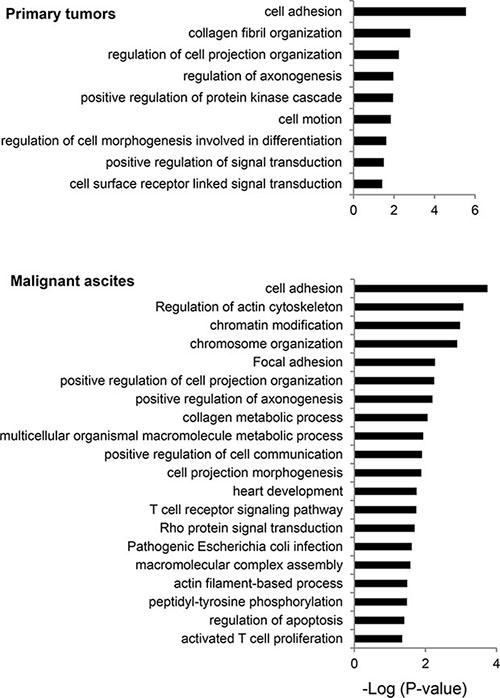 A recent study revealed that primary tumors and the matched metastases share a majority of mutations [15], exhibiting a high mutational concordance between them. However, since malignant ascites from our patients were formed after curative or palliative gastrectomy followed by recurrence (Figure 1A), it is unlikely that our primary tumors and the matched malignant ascites would exhibit a high mutational concordance. In fact, the genomic concordance between them was relatively low compared to the previous synchronous metastasis study (Figure 4A, range 0–38%). Instead, malignant ascites-specific mutations accounted for the highest proportion in our tumor samples (Figure 4A, range 15–93%). 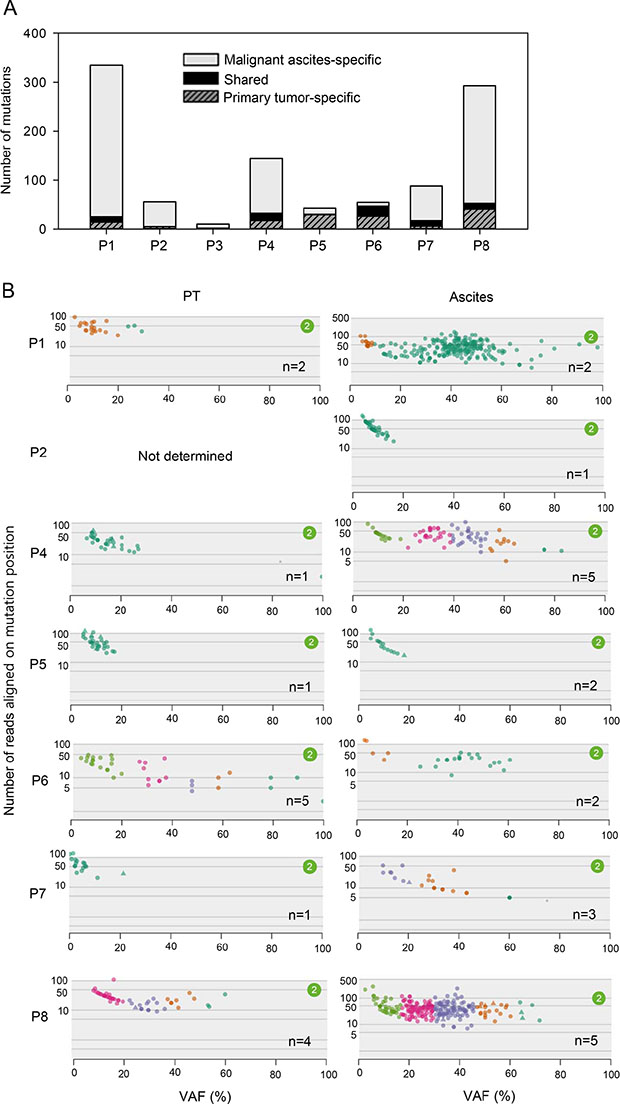 Druggable genes mutated in each patient 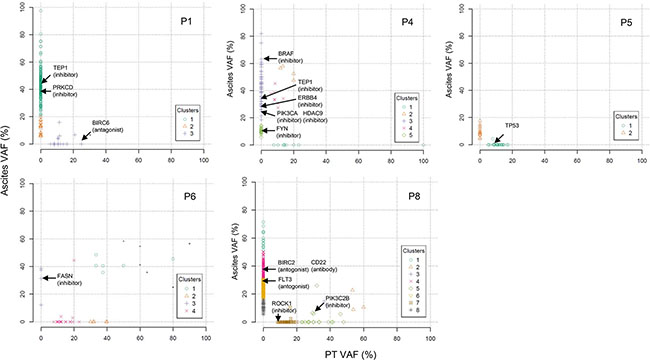 Figure 5: Two dimensional clustering of mutations presented as primary tumors versus malignant ascites. Druggable genes are indicated by arrows on the basis of the DGIdb. 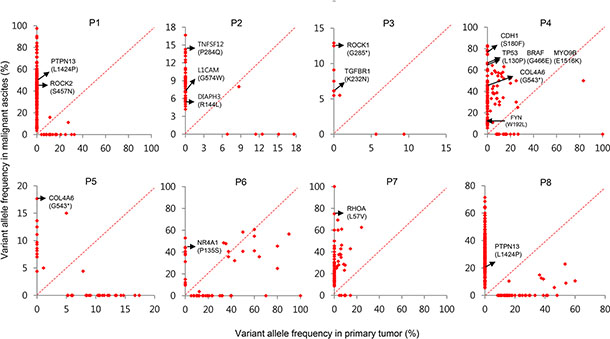 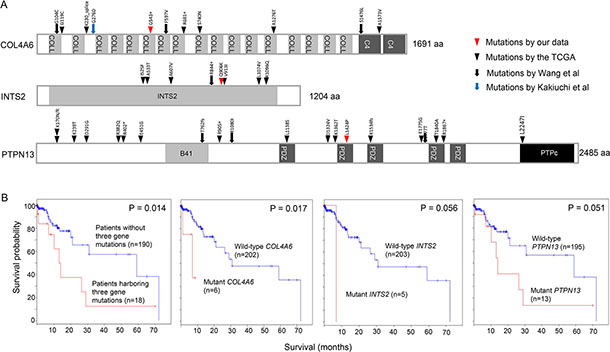 In addition, at least four of eight malignant ascites samples acquired mutations in the Rho-ROCK pathway components. In patient P7, we identified a RHOA mutation encoding the L57V substitution (Figure 6). The RHOA L57V mutation was recently identified to be a hotspot mutation for diffuse-type GC [13, 19, 20]. In patient P3, we identified a ROCK1 nonsense mutation (Figure 6). This mutation introduces a premature stop codon at the 285th amino acid of ROCK1, leading to the truncation of ~79% of ROCK1. The truncated portion includes a part of the kinase domain (aa 76–338), the HR1 Rho-binding repeat (aa 458–537), the entire Rho-binding domain (aa 948–1014), and the PH domain (aa 1119–1317). The lack of a Rho-binding domain by the ROCK1 mutation could impair the Rho-ROCK pathway similarly to the RHOA L57V mutation. In patient P4, we identified a missense mutation (E1516K) in MYO9B (Figure 6), a RhoGAP with inhibitory activity against RhoA [21]. This mutation is predicted to be deleterious by Mutation Assessor (prediction score = 2.28). A mutation (W192L, prediction score = 2.19) in FYN, a regulator of RhoA activity [22], was also identified in patient P4 (Figure 6). We also identified a ROCK2 mutation (S457N) in patient P1 (Figure 6). Accordingly, these results may suggest the importance of the Rho-ROCK pathway in peritoneal carcinomatosis.

We observed a unique base substitution signature biased toward C-to-A transversions in GC-derived malignant ascites. Interestingly, mutations detected from liver cirrhosis-derived benign ascites also presented predominant C-to-A transversions. Accordingly, these data may suggest that unknown mutagenic processes within ascitic fluid might promote C-to-A conversion. However, the result should be interpreted with caution, because the average VAF of the benign ascites-derived mutations detected was as low as ~9.3%. Although the mutation-calling software MuTect can detect mutations with VAFs as low as 10% and below with high sensitivity [29], it is required to confirm our result using a large sample set whether the biased C-to-A substitution is a characteristic of ascites-derived mutations.

Whole-exome sequencing revealed several candidate mutations in GC peritoneal carcinomatosis: mutations in druggable genes (TEP1, PRKCD, BRAF, ERBB4, PIK3CA, HDAC9, FYN, FASN, BIRC2, FLT3, ROCK1, CD22, and PIK3C2B) and mutations in metastasis-associated genes (PTPN13, TNFSF12, L1CAM, DIAPH3, ROCK1, TGFBR1, MYO9B, NR4A1, and RHOA). We also identified recurrent mutations in COL4A6, INTS2, and PTPN13. The COL4A6 nonsense mutation (G543*) may result in the loss-of-function of COL4A6 because the mutation truncates ~68% of the COL4A6 protein. The functional loss of COL4A6, a type IV collagen found in the basement membrane, could disrupt the cell-matrix interaction and enhance cell invasion and metastasis [30, 31]. PTPN13 was reported to inhibit metastasis by dephosphorylation of Src or Her2 [32]. Our study provides a preliminary result, but validation experiments are required to prove whether the recurrent mutations frequently occur in malignant ascites. Therefore, the mutations should be validated with high detection sensitivity using high quality samples. Interestingly, by searching for the TCGA mutation data, we found a hepatocellular carcinoma patient harboring the INTS2 recurrent mutation (G906K).

We found somatic mutations in the Rho-ROCK pathway genes, including RHOA, ROCK1, ROCK2, FYN, and MYO9B. Our gene ontology analysis revealed that the Rho-ROCK pathway-associated functional terms, including actin cytoskeleton, focal adhesion, and the Rho-protein signaling, were significantly overrepresented in the mutated genes in malignant ascites (Figure 3). A recent study demonstrated that the overexpression of mutant RhoA harboring an L57V mutation resulted in evasion of cell detachment-induced apoptosis, referred to as anoikis [13]. Since the capability for anchorage-independent growth and resistance against anoikis may be a prerequisite for the survival of tumor cells during metastasis, this RHOA mutation may provide a selective advantage for metastasis. We identified a nonsense mutation in ROCK1 that introduces a premature stop codon at amino acid 285. This mutation may cause the loss-of-function of ROCK1, because most of the functional domains, including the Rho-binding domain, are truncated by the mutation. Given that treatment with the ROCK inhibitor Y-27632 prevents anoikis [13], tumor cells harboring the ROCK1 nonsense mutation might be resistant to anoikis through the impairment of the Rho-ROCK pathway, similar to tumor cells harboring the RHOA L57V mutation.

We identified somatic mutations in TGFBR1 and NR4A1, which are associated with the TGF-β pathway. Contrary to a tumor suppressive role in early-stage cancer, the TGF-β pathway contributes to tumor invasion and metastasis through epithelial-mesenchymal transition (EMT) in advanced cancer [33]. A recent study reported that NR4A1 activated the TGF-β-induced EMT and promoted metastasis through AXIN2- RNF12/ARKADIA-induced SMAD7 degradation [26]. Therefore, further studies are required whether the NR4A1 mutation participates in the development of peritoneal carcinomatosis.

Our study revealed the genetic alterations and their clinical associations in GC peritoneal carcinomatosis through whole-exome sequencing of malignant ascites. However, there are several limitations, including the small sample size, the relatively low sequencing depth, low tumor purity of primary tumors, and a lack of functional validation. In the future, deep sequencing with a large sample set and subsequent functional studies would support our results, facilitating the discovery of therapeutic targets against GC peritoneal carcinomatosis.

Surgical specimens of primary gastric tumors and their matched normal gastric tissues (non-malignant) were harvested and fresh frozen in Yonsei Cancer Center (Seoul, Korea). The normal gastric tissues used in this study were harvested from gastric regions at a distance from the primary tumor and exhibited no evidence of metaplasia and dysplasia. Matched malignant ascites were collected through paracentesis or catheter drainage of GC patients, whereas non-malignant ascites were obtained from patients with liver cirrhosis. The clinicopathologic characteristics were retrospectively reviewed based on the electronic medical records of the patients. Pathological diagnosis and staging were conducted according to the American Joint Committee on Cancer 7th staging system. This study was performed with the approval of the institutional review board.

Our exome sequencing raw files are available from the NCBI SRA (http://www.ncbi.nlm.nih.gov/sra/) via accession number SRP043661.