Bladder cancer is one of the most common malignancies worldwide. Long non-coding RNAs (lncRNAs) are a class of non-coding RNAs that play crucial roles in diverse biological processes. The pseudogene-expressed lncRNA is one major type of lncRNA family. Small ubiquitin-like modifier (SUMO) 1 pseudogene 3, (SUMO1P3) is a novel indentified lncRNA that was previously reported to be up-regulated in gastric cancer. However, we know nothing about the biological function and underlying mechanism of SUMO1P3 in tumor. Furthermore, the relationship between SUMO1P3 and bladder cancer is completely unknown. We hypothesized that SUMO1P3 also have roles in bladder cancer.

In this study, we found that SUMO1P3 was significantly up-regulated in bladder cancer tissues compared with paired-adjacent nontumorous tissues in a cohort of 55 bladder cancer patients. Moreover, up-regulated SUMO1P3 expression was positively correlated with greater histological grade (P<0.05) and advanced TNM stage (P<0.05). Furthermore, we found cell proliferation / migration inhibition and apoptosis induction were also observed in SUMO1P3 siRNA-transfected bladder cancer cells. Our data suggest that SUMO1P3 plays oncogenic roles in bladder cancer and can be used as a potential prognostic and therapeutic target.

Bladder cancer is the most common genitourinary tumors worldwide, and its incidence and mortality have been significantly increased in the past decades [1, 2]. However, at the early stage of bladder cancer there are no specific symptoms for these patients [3]. Since the prognosis of bladder cancer is closely related to the stage of disease at diagnosis, novel diagnostic markers for early stage are urgently needed [4, 5]. Despite improvements in surgery and adjuvant chemoradiotherapies, the 5-year survival rate for patients with bladder cancer remains at only 50–C60 % [6, 7].

The rapid development of RNA genomics has highlighted the role of long non-coding RNAs (lncRNAs) in many human diseases, especially in cancers [8–10]. Recent evidence showed that lncRNAs play important regulatory roles in diverse biological processes, such as transcriptional regulation, cell growth and tumorigenesis [11–14]. Examples include HOTAIR in breast cancer, MALAT1 in lung cancer and PCAT-1 in prostate cancer, indicating that lncRNAs play crucial roles in tumorigenesis or tumor progression [15–17]. Small ubiquitin-like modifier 1 pseudogene 3 (SUMO1P3) is a novel indentified long non-coding RNA that was originally identified as a potential prognostic and therapeutic target for gastric cancer [18]. However, the relationship between lncRNA SUMO1P3 and bladder cancer is completely unknown.

In the present study, we found that lncRNA SUMO1P3 was significantly up-regulated in bladder cancer tissues compared with paired-adjacent nontumorous tissues in a cohort of 55 bladder cancer patients. Further experiments indicated that silencing lncRNA SUMO1P3 could inhibit proliferation, induce apoptosis and suppress migration of the bladder cancer cell lines.

SUMO1P3 was up-regulated in bladder cancer 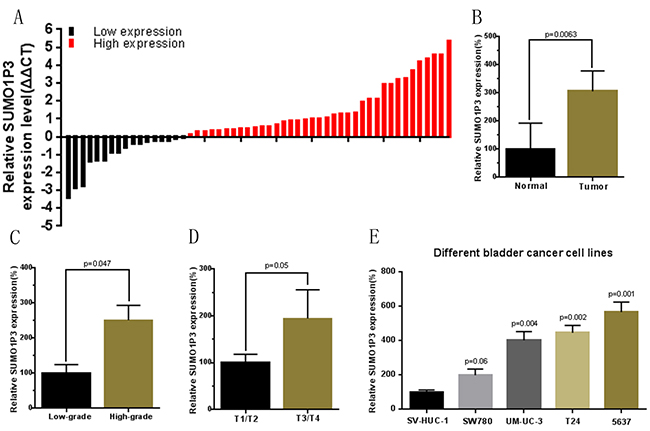 Table 2: Summary of clinicopathological features of tissues of bladder cancer 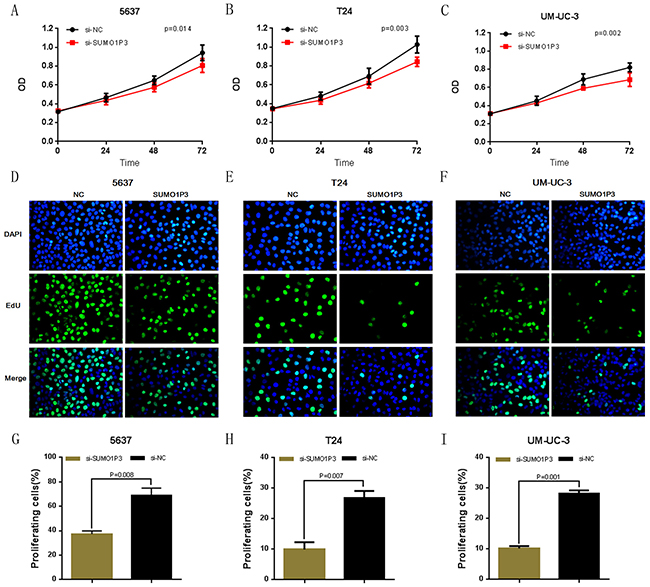 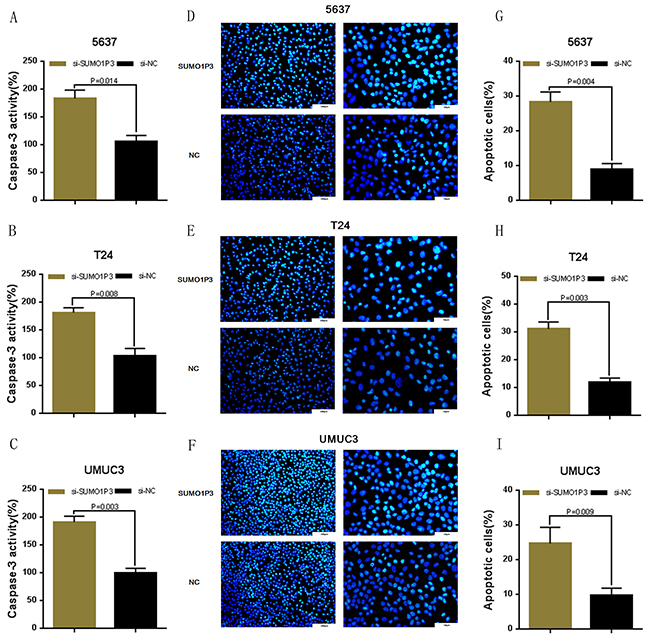 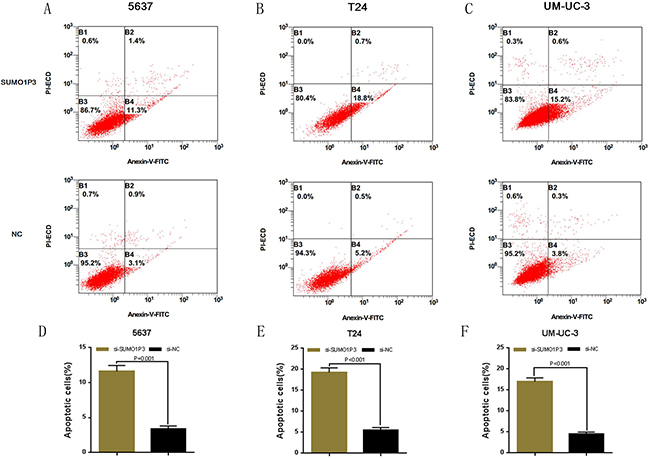 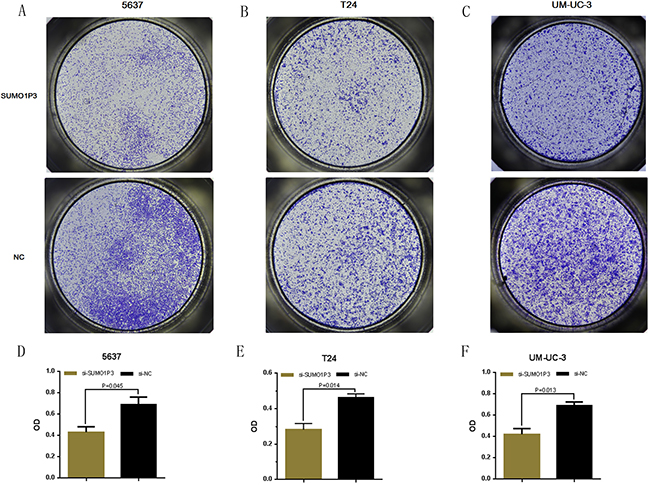 Long non-coding RNAs (lncRNAs) are a type of RNA molecule longer than 200 nucleotides and not translated into a protein [23, 24]. Recently, numerous pieces of evidence indicate that lncRNAs play a vital role in cancer progression and development [25, 26]. LncRNA SUMO1P3 was previously reported to be up-regulated in gastric cancer. However, the relationship between lncRNA SUMO1P3 and bladder cancer is completely unknown. Furthermore, we know nothing about the biological function and underlying mechanism of lncRNA SUMO1P3 in cancers [27].

To the best of our knowledge, this is the first report of lncRNA SUMO1P3 being involved in the development of bladder cancer. In this study, we found that lncRNA SUMO1P3 was up-regulated in bladder cancer compared with paired-adjacent nontumorous tissue and up-regulated SUMO1P3 expression was positively correlated with greater histological grade and advanced TNM stage. These results suggest that lncRNA SUMO1P3 may emerge as a novel player in the state of bladder cancer. In order to understand the biological functions of lncRNA SUMO1P3, we detected the cell proliferation, apoptosis and migration by silencing SUMO1P3 in the related bladder cancer cell lines. Inhibited proliferation, increased apoptosis and suppressed migration were observed in SUMO1P3 siRNA-transfected bladder cells. These findings indicated that SUMO1P3 may play key roles in the progression and development in bladder cancer.

In conclusion, the expression level of the lncRNA SUMO1P3 is increased in bladder cancer tissues compared with paired-adjacent nontumorous tissues. Up-regulated SUMO1P3 expression has been associated with poor prognosis, likely due to the ability of SUMO1P3 to induce cell growth and metastasis in bladder cancer cells. The molecular mechanism underlying SUMO1P3 upregulation in bladder cancer is still to be studied in future works.

Cumulatively, these findings indicate that SUMO1P3 play an oncogenic role in bladder cancer and SUMO1P3 may be used as a potential prognostic and therapeutic target of bladder cancer.

Small interfering RNA that targeted SUMO1P3 and a scrambled negative control were purchased from GenePharma, Shanghai, China. The target sequence of si-SUMO1P3 was 5′-TGGCCCTGATGTTCTAGCATGTGAT-3′. The cells were cultured 24 h prior to transfection. Then, the cells were transiently transfected with either SUMO1P3 siRNA or negative control siRNA using Lipofectamine 2000 Transfection Reagent (Invitrogen, Carlsbad, CA, USA) according to the manufacturer’s instructions. After 48 h, cells transfected with siRNA were harvested for qRT-PCR .

The total RNA of the tissue samples or the transfected cells were extracted using the Trizol reagent (Invitrogen, Carlsbad, CA, USA) according to the manufacturer’s protocol. The concentration and purity of the total RNA were detected with UV spectrophotometer analysis at 260 nm and the electrophoresis detection showed good quality of purified RNA. cDNA was converted from total RNA by using SuperScript III (Invitrogen) according to the instructions. The primer sequences were as follows: SUMO1P3 primers8 forward: 5′-ACTGGGAATGGAGGAAGA-3′, reverse: 5′-TGAGAAAGGATTGAGGGAAAAG-3′; GAPDH primers forward: 5′-CGCTCTCTGCTCCTCCTGTTC-3′, reverse: 5′-ATCCGTTGACTCCGACCTTCAC-3′. Quantitative real-time PCR was performed by using the ABI PRISM 7000 Fluorescent Quantitative PCR System (Applied Biosystems, Foster City, CA, USA) according to the manufacturer’s instructions. The average value in each triplicate was used to calculate the relative amount of SUMO1P3 using 2−ΔΔCt methods. Experiments were repeated at least three times.

Cell proliferation was determined using Cell Counting Kit-8 (Beyotime Inst Biotech, China) according to instructions. Briefly, 5 × 103 cells/well were seeded in a 96-well flat-bottomed plate for 24 h, then transfected with si-SUMO1P3 or si-NC and cultured in normal medium. At 0, 24, 48 and 72h after transfection, 10 μl of CCK-8 (5mg/ml) was added to each well and the cells were cultured for 1 hour [28]. The absorbance in each well was finally determined at a wavelength of 450 nm using a microplate reader (Bio-Rad, Hercules, CA, USA). Experiments were repeated at least three times.

Cell apoptosis was determined by ELISA assay. Cell Caspase-3 activity was measured using the Caspase-3 Colorimetric Assay kit (Abcam, Cambridge, UK) according to the manufacturer’s protocol at 48 hours after transfection, respectively[29]. Experiments were repeated at least three times in duplicates.

Apoptotic cells induced by SUMO1P3 silencing were also observed by using the Hoechst 33258 staining kit (Life, Eugene, OR, USA) according to the manufacturer’s instructions. Briefly, 5 × 104 cells/well was seeded in a 12-well plate for 24 h, then transfected with siRNA. At 48h after transfection, the cells were fixed for 30 min at room temperature using 100μl of fixing buffer (4% polyformaldehyde containing PBS). Subsequently, cells were incubated with 100μl of 1X Hoechst 33342 solution for 30 min at room temperature in the dark followed by washing with 100μl of PBS [30]. The cells were then visualized under a fluorescence microscopy. Experiments were repeated at least three times.

Cell motility was determined by wound healing assay. At 24 h post transfection, a wound field was created using a sterile 200 μl pipette tip in about 90% confluent cells. The cells were incubated for 24 h at 37°C, and then the migration of cells was monitored with a digital camera system. The cell migration distance (μm) was calculated by the software program HMIAS-2000 [32]. Experiments were repeated at least three times.

The cell motility assay were also performed using a transwell insert (8 μm, Corning). 24 h after transfection, 5x104 cells were first starved in 200 ml serumfree medium and then placed in the uncoated dishes [33]. The lower chamber was filled with 500 ml of complete medium. The cells were incubated for 48 h at 37°C, and then the cells that had migrated to the bottom surface of the filter membrane were stained with 0.5% crystal violet solution and photographed in five preset fields per insert. The results represented the average of three independent experiments.

All experimental data from three independent experiments were analyzed by Student’s t-test or ANOVA and results were expressed as mean ± SD. P-values of less than 0.05 were considered to be statistically significant. All statistical tests were conducted by SPSS version 19.0 software (SPSS Inc.Chicago, IL, USA).

The authors declare that they have no conflict of interest with this study.