Here, we analyzed amplification during the differentiation of skeletal muscle. Our previous studies on gene amplification in non-malignant mammalian cells indicated that physiological amplification events may not only be restricted to small time windows but also to small number of cells. In the light of this finding, we used fluorescence in situ hybridization (FISH) to detect gene amplifications on single cell level. In addition, we used qPCR to monitor amplification over a time window of several days. The extended time window was selected to cover myogenic differentiation steps. A study from Hayward et al 1986 on primary chicken embryo myoblasts distinguished between prefusion stage (0-36h), fusion stage (48-72) and postfusion stage (more than 72h) [12]. In mouse C2C12 myoblasts maximal fusion is detectable between 24h and 36h and fusion is essentially completed after 72h to 96h [13]. In addition to the detection of amplification we searched for accompanying double strand break repair during myogenesis. We further set out to confirm our results on primary human myoblasts and in vivo on mouse cryosection.

Amplification of ACTA1, NUP133, MYO18B and CDK4 in single cells during mouse myogenesis

We analyzed C2C12 cells (ATCC), which represent a subclone generated from a mouse myoblast cell line [5, 6]. To search for gene amplification in single cells we used fluorescence in situ hybridization (FISH) on cells differentiating to myotubes over a period of seven days. We selected chromosome regions that harbor genes that were previously shown to be involved in myogenesis and/or to specifically show increased expression during myogenic differentiation. The chromosomal regions included 8qE2 containing ACTA1/NUP133, 5qF containing MYO18B and 10qD3 containing CDK4. It was previously shown that alpha-actin (ACTA1) and MYO18B expression increased during myogenic differentiation [13, 14]. CDK4 was reported as amplified in tumors of myogenic origin [15]. In detail, the following BACs were used for FISH analysis: BAC RP23-446H16 containing genes ACTA1 and NUP133, RP23-6J9 containing MYO18B and RP23-432F11 containing CDK4. In addition, as reference we used BAC RP23-132P5 that contained TERT which was previously not associated with myogenic processes. We define a copy number of the test gene as normal when both the number of signals corresponded to the genome ploidy and its fluorescence spot size equaled the spot size of the reference gene. An amplified copy number is defined by an increased signal number and/or by an increased fluorescence spot size of a test gene compared to the reference gene. FISH analysis on undifferentiated C2C12 cells revealed 3 signals for ACTA1/NUP133, 4 signals for MYO18B, 4-5 signals for CDK4, and 4 signals for TERT gene. Representative hybridization results of undifferentiated C2C12 nuclei are shown in Figures 1a and 2a. These results are consistent with the known near-tetraploid karyotype of C2C12 cells [16]. For amplification analysis we performed FISH on C2C12 cells at days 3-7 following differentiation inductions. The above time points were selected to span the mouse myoblasts fusion process that starts with the prefusion stage (0-36h), followed by the fusion stage (48-72), and that is completed after 72h to 96h [12, 13]. 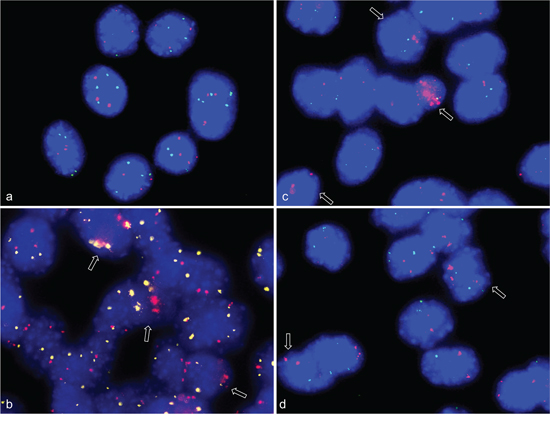 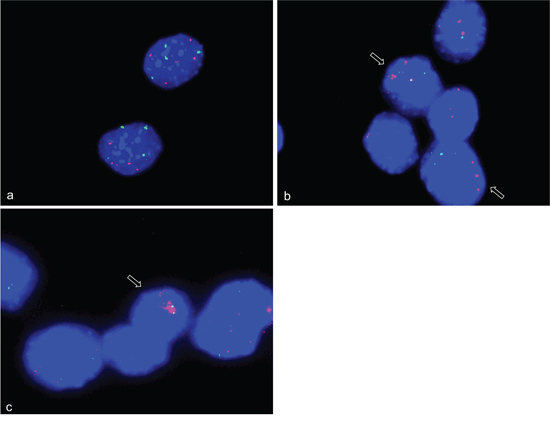 Amplification of ACTA1, NUP133, MYO18B and CDK4 identified by qPCR during mouse myogenesis

For ACTA1 we found no evidence for amplification but a slight copy number decrease both in undifferentiated cells and throughout the differentiation process. This finding was confirmed by two ACTA1 specific TaqMan assays. The reduced copy number likely reflects a lower chromosome 8q number, which was also indicated by three fluorescence signals per nucleus in FISH experiments as compared to the four fluorescence signals per nucleus in FISH experiments of the reference TERT on mouse chromosome 13qC1.

Amplification of NUP133, CDK4 and MDM2 in primary human myoblasts during myogenesis 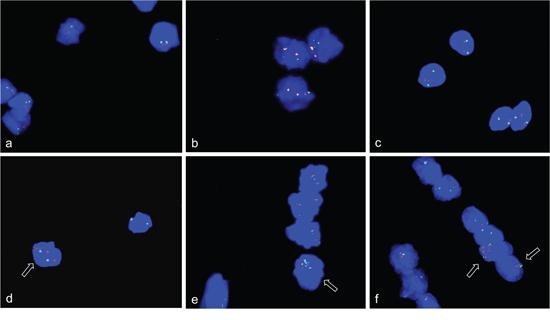 Amplification of NUP133, CDK4 and MDM2 identified by qPCR in primary human myoblasts during myogenesis 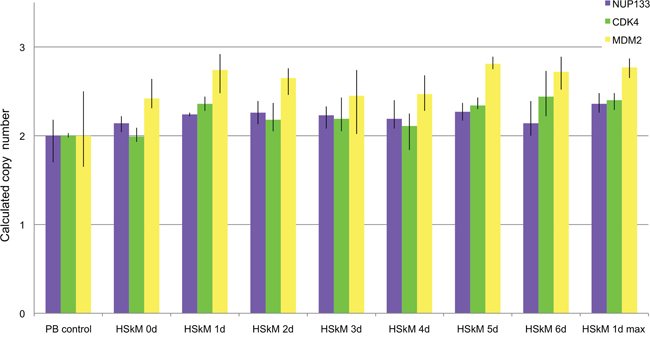 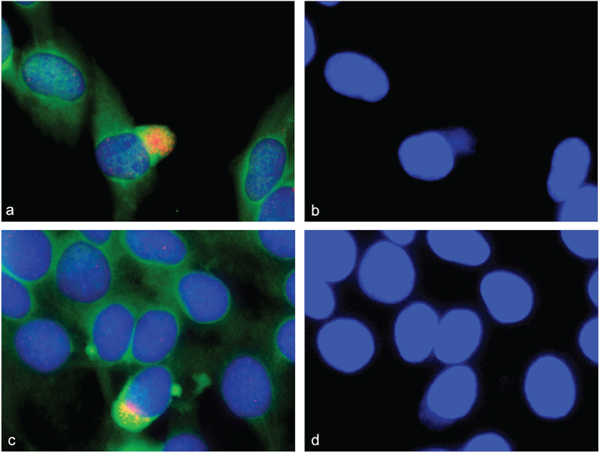 Figure 6: Gene amplification in alpha-actin expressing C2C12 cells. Combined immunofluorescence and fluorescence in situ hybridization was used to confirm gene amplifications in differentiating myotubes. C2C12 cells stained positive for alpha-actin 4 days after differentiation induction (green). NUP133 amplifications were found both inside and outside the nucleus a, c. Enhanced picture of a DAPI stain is shown to show DNA outside the nucleus b, d.

Using simultaneous FISH with ACTA1/NUP133-BAC and MYO18B-BAC again revealed strong fluorescence signals for ACTA1/NUP133 outside the nucleus (Figure 7a) while less pronounced signal for ACTA1/NUP133 were found in the nucleus. Likewise, strong fluorescence signals outside and weak signals inside the nucleus were found for CDK4. The signal of the reference probes MYO18B (green) (Figure 7a) and ANO4 (green) (Figure 7b) were only found in the nucleus. Given that ANO4 and CDK4 were localized on the same chromosome, the finding of strong CDK4 signals outside with ANO4 signals remaining in the nucleus argues against a random exclusion of DNA material. 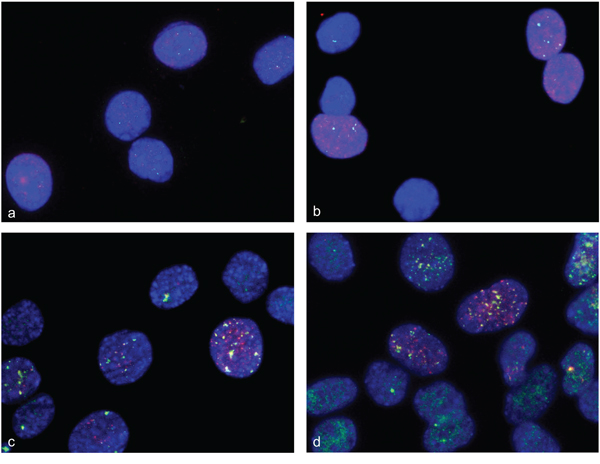 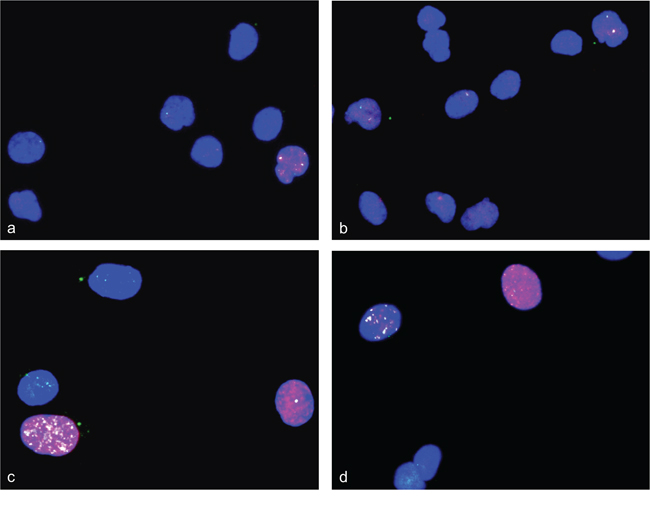 Using a combined FISH-IF protocol, we analyzed whether C2C12 cells bearing gene amplifications also show an increased number of double strand breaks. C2C12 cells were differentiation induced for 4 days and first stained for gamma-H2AX. Subsequently, slides were used for FISH analysis with BAC-probes specific for ACTA1/NUP133 and CDK4. Representative gamma-H2AX foci are shown in an overview picture with the results of FISH analysis shown in enlarged display windows. We found an overlap of cells with gamma-H2AX foci and cells with gene amplifications (Figure 10). 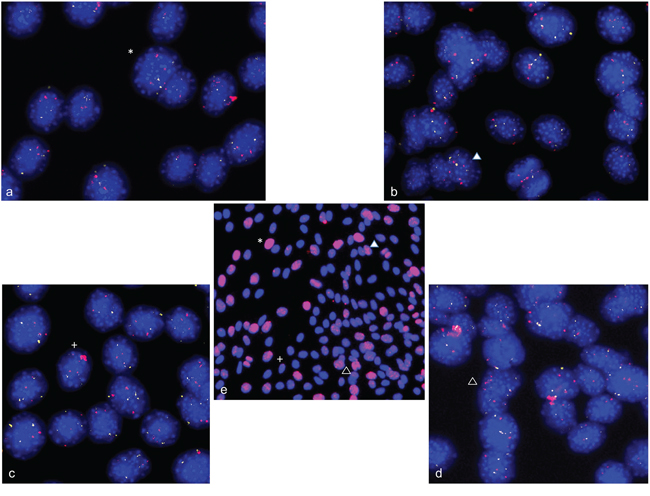 Figure 10: Double strand breaks and gene amplification in differentiation induced C2C12 cells. Combined immunofluorescence assays and FISH were used to analyze the correlation between double strand breaks and amplification in C2C12 cells at day four after differentiation induction. Gamma-H2AX foci are shown in red in the overview picture (e) in the center of the figure. FISH analysis of NUP133 (pink) and CDK4 (white) is shown in the four outer pictures a-d, that represent enlarged portions of the overview picture with each position indicated by a separate symbol (cross, asterisk, filled and empty triangle). There is an overlap of cells with gamma-H2AX foci and cells with strong signals for NUP133 (pink) and/or CDK4 gene indicating amplifications of these genes. Nuclei were counterstained with DAPI.

In vivo analysis of gene amplification 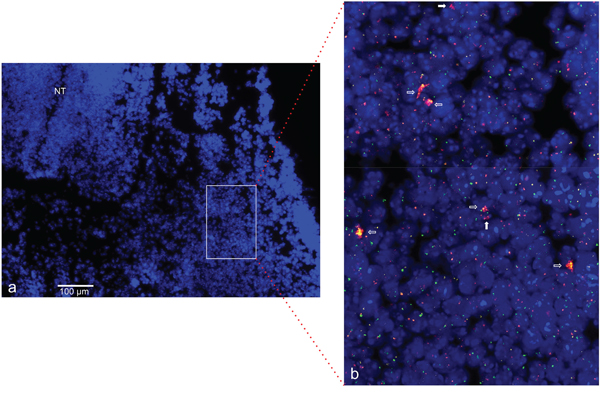 Regarding the mechanism of gene amplification, the process underlying the amplification in normal cells is likely different from the amplification mechanism known for mammalian tumor cells. The breakage-fusion-bridge-cycle model hypothesizes the collection of multiple copies by subsequent cycles in the course of cell divisions [21]. In differentiating cells the copy numbers are increased independent from cell division. The increase in normal cells may be due to multiple firing of replication origins and endocycling as reported for Drosophila [22]. One of the first models of gene amplifications that were hypothesized more than 30 years ago described an "onion-like" structure created by unscheduled re-replication in a replication bubble [23]. In our study, the clusters of frequently enlarged FISH signals in the nucleus suggest a re-replication mechanism. This hypothesis awaits further experimental confirmation.

Regarding the fate of amplified gene in physiological processes, amplified chorion DNA is removed by cell death of follicle cells in Drosophila. We did not find evidence for cell death as a general mechanism to remove sequences amplified during C2C12 myogenic differentiation. We found, however, evidence for the removal of amplified DNA from the nucleus. Using simultaneous FISH and IF we identified cells with amplified DNA not only in the nucleus but also in the cytoplasm of differentiation induced C2C12 cells. Specifically, we found intense fluorescence signals for NUP133 and CDK4 but not for the reference genes ANO4 and MYO18B outside the nucleus, arguing for a selective exclusion of amplified sequences.

BAC clones were taken from the RP-11 (http://www.chori.org/bacpac/) libraries of the Welcome Trust Sanger Institute and available from SourceBioSciences, Germany. BAC-DNA (1μg) was either labeled with Alexa-488-dCTP (green fluorescence signals), with Alexa-555-dCTP (yellow fluorescence) or with Alexa-594-dCTP (pink fluorescence signals) using the FISHTag DNA labeling Kit according to the manufacturer's instructions. Differentially labeled probe DNAs (60 ng) were precipitated in the presence of mouse or human Cot-1 DNA. Samples were resuspended in hybridization mix (50% formamide, 2xSSPE, 10% dextrane sulphate and 4% SDS).

Differentiating C2C12 myoblast cells and control non-differentiating C2C12 myoblast cells were grown on glass slides and fixed in ice-cold methanol for 20 minutes. Human primary myoblast cells (HSkM) were treated alike. Slides were washed in PBS for 5 minutes and treated with 0.02% Tween-20 for 5 minutes. Slides were RNase treated (100 μg/ml RNaseA in 2x SSC) for 1h at 37°C and pepsin treated (0.005% in 0.01 M HCl at 37°C) for 10 minutes. Postfixation was performed using 1% formaldehyde/1x PBS for 10 minutes at room temperature. Hybridization and posthybridization washes were as described previously [3].

For simultaneous fluorescence in situ hybridization and immunofluorescence, differentiating C2C12 cells on glass slides were fixed in ice-cold methanol for 20 minutes and permeabilized with 0.2% Tween-20 for 5 minutes. Postfixation was done by 1% formaldehyde/1x PBS for 10 minutes at room temperature. Slides were blocked with goat serum, incubated for 1 h with rabbit antibody monoclonal against muscle-Actin (ab156302, Abcam) and detected using an Alexa-488 coupled secondary antibody (Invitrogen). Finally, slides were dehydrated by an ascending ethanol series (70%/80%/96%) and air-dried. Hybridization and post hybridization washes were as described above.

For immunofluorescence C2C12 cells or human primary myoblast cells (HSkM) were grown on glass slides, fixed and permeabilized as above and incubated with following antibodies: mouse antibody monoclonal against gamma-H2AX (ab26350, Abcam) and rabbit antibody polyclonal against 53BP1 (ab21083, Abcam). Detection was done with an Alexa-488 coupled secondary antibody against rabbit and Alexa-594 coupled secondary antibody against mouse (Invitrogen).

Transverse cryosections (10 μm) from mouse trunk at embryonic stage E11.5 were treated with Carnoy's fixative for 15 min at 4°C, pepsin-digested and fixed in 4% paraformaldehyde in diethylpyrocarbonate-treated PBS for 10 minutes. Probes were labeled as described above, applied to the section and denatured for 5 min at 80°C. Hybridization was maintained for 2 days at 37°C. Posthybridization washes and DAPI staining were as described above.

We thank A. Grißmer for technical assistance.

1. Bostock CJ. Mechanisms of DNA sequence amplification and their evolutionary consequences. Philosophical transactions of the Royal Society of London Series B, Biological sciences. 1986; 312:261-273.