Renal cell carcinoma (RCC), the third most common malignancy of the genitourinary system, accounts for 3% of all adult malignancies [1]. The incidence of RCC is increasing in most areas of the world for which statistics are available for recent decades [2, 3]. Localized RCC is potentially curable with surgical resection of the diseased tissue, but 30% of patients develop metastatic disease after surgery. Metastatic RCC remains largely incurable due to its resistance to chemotherapy and radiation [4]. The median survival rate of metastatic RCC patients is 1.5 years, and the five-year survival rate is less than 10% [5].

Clear cell renal cell carcinoma (ccRCC) is the most common subtype of RCC, accounting for 60 to 80% of all RCCs [6]. The loss of function of the von Hippel–Lindau (VHL) tumor suppressor gene characterizes ccRCC [7–9]. VHL is a multifunctional protein that acts as an adaptor for different molecular and subcellular complexes. The best-characterized function of VHL is its role as the substrate recognition component of the E3 ubiquitin protein ligase complex that targets the α-subunit of the hypoxia-inducible factor (HIF) for proteolytic degradation destruction [10]. In ccRCC, the loss of VHL leads to up-regulation of HIF-α–mediated transcriptional programs that favor metastatic processes [11].

Recent studies identified several new ccRCC genes, including UTX, JARID1C, SETD2, and BAP1 [12–16]. These studies have heralded a marked expansion in our understanding of the genetic landscape of ccRCC. However, the underlying molecular mechanisms of renal carcinogenesis remain unclear. It is still necessary to identify new signature genes and specific biomarkers in order to provide potential targets for RCC early detection. Furthermore, these targets will allow surveillance of tumor progression, and prediction of patient prognoses [17–21].

Here, we report that C12orf59 is frequently decreased at the mRNA and protein levels in a panel of genitourinary cancer cell lines and ccRCC. We found that the decreased C12orf59 expression is associated with renal cell carcinoma clinico-pathological parameters. Therefore, C12orf59 protein level change might be used for clinic marker for RCC early detection, surveillance of tumor progression, and prediction of patient prognoses.

C12orf59 is newly identified gene. However, its tissue distribution and subcellular location remains unclear. Our results showed that C12orf59 mRNA was broadly expressed in the majority of the human normal tissues detected, but it was most highly expressed in the kidney (Figure 1A). Immunofluorescence staining showed that C12orf59 was located in the cytoplasm (Figure 1B). Furthermore, cytoplasmic and nuclear extracts were obtained from renal cancer cells stable transfected C12orf59 expression lentivirus. The western blot results showed that the C12orf59 protein was primarily detected in the cytoplasm fractions, with no detectable C12orf59 protein in the nuclear fractions (Figure 1C). 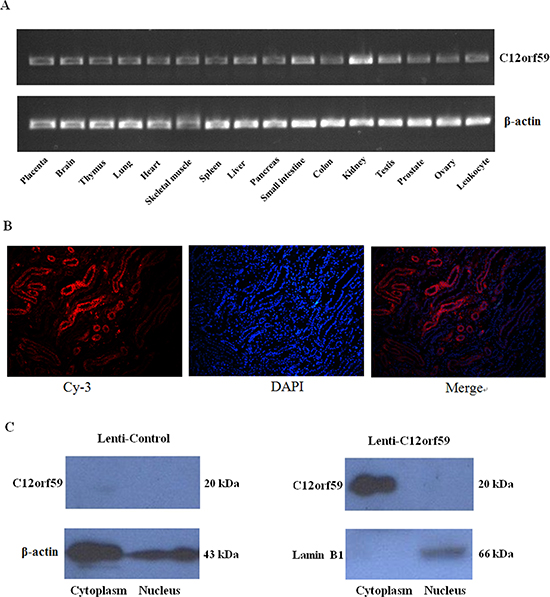 Loss of C12orf59 expression in the RCC cell lines and ccRCC 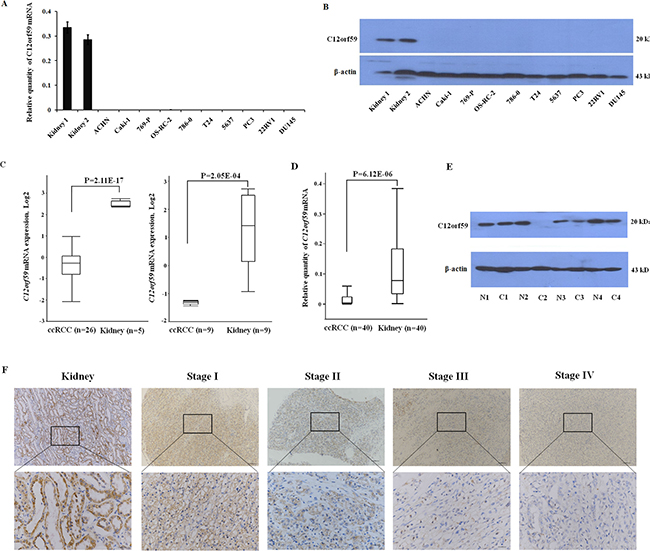 Loss of C12orf59 is correlated with tumor stage, metastasis and poor prognosis 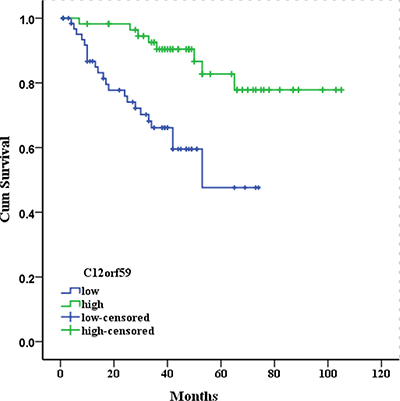 The univariate analysis of the overall survival revealed that the relative level of C12orf59 expression, primary tumor stage, the regional lymph node metastases and distant metastases were prognostic predictors (Table 2). The variables with a P value < 0.05 were selected for the multivariate analysis. The multivariate analysis showed that the relative level of C12orf59 expression, the primary tumor stage, and distant metastases were independent prognostic predictors. The patients with high C12orf59 protein levels in the tumors had a better prognosis than the patients with low C12orf59 protein levels (RR: –1.40, 95% CI: 0.11–0.57, P = 0.009; Table 2).

To determine whether genetic alterations contribute to the silencing of C12orf59, we performed sequence screening on the exons and exon-intron junctions of C12orf59 in 5 renal cancer cell lines and 100 paired ccRCC samples using PCR and direct sequencing. The results showed no somatic mutations/deletions of C12orf59 in the five human renal cancer cells and the 100 paired ccRCC samples, suggesting that the decreased C12orf59 expression might not be caused by genetic alterations. 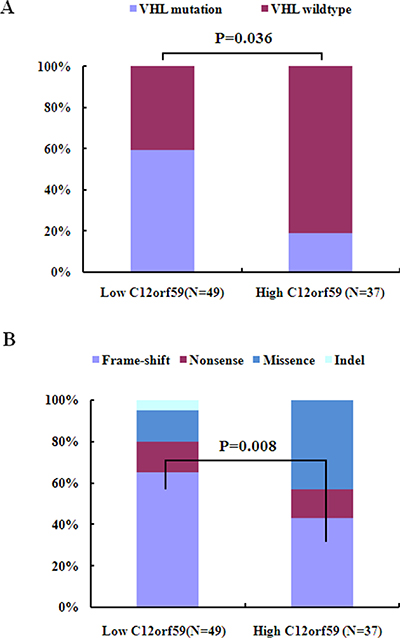 We found that the C12orf59 gene was expressed in almost all the tissues, with the highest levels of expression found in the kidney, and that C12orf59 is predominantly a cytosolic protein (Figure 1B and 1C). The C12orf59 protein is highly conserved among humans, chimpanzees, cows, pigs, mice and rats (Supplementary Figure S1). This ubiquitous expression and conserved sequences of C12orf59 suggested that it might have an important role in the regulation of cell progression.

The genetic mechanism of the decreased expression of C12orf59 was investigated by direct sequencing of the gene promoter and exons. No somatic mutations/deletions of C12orf59 in the five human renal cancer cell lines and 100-paired ccRCC samples were identified. Whether molecular mechanisms other than mutations, such as promoter hypermethylation, might contribute to C12orf59 silencing remains unknown, but the possibility might reflect genetic and epigenetic events and needs further exploration.

C12orf59 cDNA was cloned into pGV lentivirus vector (Genechem Incorporation, Shanghai, China). The resulting lentivirus vector together with pHelper 1.0 and pHelper 2 vectors were cotransfected into 293FT cells to generate lentiviral stock, and pGV empty vector served as negative control. Forty-eight hours after transfection, supernatant harboring lentiviruses were collected. ACHN cells were infected by lentiviruses in 6-well plates by applying infection cocktail. After 48 hours, infected cells were selected to expand culture for further investigation by using 2 μg/ml of puromycin. Expression of C12orf59 was verified by using real-time PCR and Western blotting.

Tissue samples from the tumors with matched normal controls were surgically resected at member institutions of the Urinogenital Cancer Genomics Consortium (UCGC) in China as described previously [30]. Of 100 ccRCC and paired normal kidney tissues, only 86 paires with detailed information were selected for further analysis [30]. An additional 122 paraffin-embedded RCC tissue samples with follow-up data were collected from patients between 1999 through 2007. Each patient had provided written informed consent prior to study participation. This study protocol was carried out with ratification by the Ethics Committee of Shenzhen Second People’s Hospital. Of these 208 patients, 138 were men, and 70 were women. The median age of the patients was 53 years (range, 4–83 years). The median follow-up time was 39 months (range, 1–105 months). Information regarding the gender, age, stage of disease, and histopathological factors was obtained from the medical records. All the tumors were confirmed as ccRCC by the clinical pathology department of the hospital, and the cases were staged according to the tumor node metastasis staging system.

The levels of C12orf59 mRNA in different human adult tissues (Human Multiple Tissue cDNA Panels, I and II) were determined by semi-quantitative PCR with C12orf59 primers and β-actin primers in accordance with the manufacturer’s instructions. The levels of C12orf59 mRNA in the cancer cell lines and the tumor and paired normal tissues were determined by a SYBR Green-based real-time PCR assay with C12orf59 primers, and β-actin was used as the internal control. The PCR mixture was initially incubated at 94°C for 2 minutes, followed by 40 cycles of denaturation at 94°C for 15 seconds and annealing and extension at 68°C for 30 seconds. The assay was carried out three times in triplicate using the following primer sets: C12orf59-F: 5′-CAGCACTCTCCAGAGCACTATCA-3′ and C12orf59-R: 5′-TGGCTACT GTGAAGCGACTCAT-3′; β-actin-F: 5′-GGCACCACACCTTCTACAATGAG-3′; and β-actin-R: 5′-GGATAGCACAGCCTGGATAGCA-3′. The relative expression level of C12orf59 was determined using the 2−ΔΔCt method [35].

The Oncomine database [31] was used for retrieving the alterations in the mRNA expression levels in cancers and corresponding disease-free normal and/or normal adjacent tissues.

For immunofluorescence, the sections were deparaffinized in xylene and rehydrated through graded alcohols, then boiled in 10 mM citrate buffer (pH 6.0) for 30 min for the antigen retrieval. The endogenous hydrogen peroxidase was blocked by treating the slides with 3% hydrogen peroxide and incubating them for 20 min. The section were washed three times in PBS and incubated in TBS containing 5% BSA for 30 min at room temperature. The section were incubated with a 1:200 dilution of rabbit polyclonal anti-C12orf59 (ABGENT, CA) in 0.5% BSA in PBS overnight at 4°C. The section were washed three times with cold PBS and incubated with a 1:1000 dilution of the secondary antibody donkey anti-rabbit IgG conjugated to Cy3 (EarthOx, USA) in 0.5% BSA in PBS for 1 h at room temperature. After the section were washed three times with PBS and once with water, the nuclei were stained with 4′,6-diamidino-2-phenylindol (DAPI) (Sigma, USA). Immunofluorescence was visualized using a fluorescence microscope, and cyanine 3 fluorescence was detected after 100% excitation at 568 nm.

The tissues or cells were lysed with a RIPA buffer (Sigma, USA) containing protease inhibitors (Sigma, USA). Protein quantification was performed using a BCA protein assay kit (Pierce, USA), and 30 μg of total protein were separated in a 12% gel by SDS-polyacrylamide gel electrophoresis (SDS-PAGE) and transferred to a PVDF membrane (Hybond-P, Amersham Biosciences Piscataway, NJ, USA). After being blocked with 5% BSA in Tris-buffered saline with 0.1% Tween 20 (TBST) at room temperature for 2 h, the membrane were probed with primary rabbit anti-C12orf59 antibody (ABGENT, CA) at a dilution of 1:2000 in 5% skim milk powder in TBST at 4°C overnight. After being washed three times with TBST buffer, the blots were incubated with horseradish peroxidase (HRP)-conjugated secondary donkey anti-rabbit at a dilution of 1:10000 for 1–2 h. After washed three times with TBST buffer, the blotting signals were visualized with ECL systems (Pierce, Rockford, IL, USA). β-Actin was used as a loading control and was detected with a rabbit mAb (1:1,000 dilution, Novus).

Immunostaining of the paraffin-embedded RCC tissue sections was performed by a similar method to that used in our previous work [36]. The sections were deparaffinized and rehydrated, then boiled for the antigen retrieval. The endogenous hydrogen peroxidase was blocked. After being incubated with 10% BSA, the sections were incubated with anti-C12orf59 antibody (HPA036147, Sigma, USA) used at a 1:300 dilution at 4°C overnight. After being washed in PBS, the sections were treated with a MaxVision HRP-Polymer anti-rabbit IHC Kit (Maixin Bio, Fujian, China) and stained with a DAB kit (Maixin Bio, Fujian, China). The expression of C12orf59 was assessed blindly by two independent investigators. The staining of C12orf59 was scored as the product of the staining intensity (on a scale of 0–3: negative = 0, weak = 1, moderate = 2, strong = 3) and the percentage of cells stained (on a scale of 1–5: 1 = 0%–20%; 2 = 21–40%; 3 = 41–60%; 4 = 61–80%; 5 = 81%–100%), resulting in scores ranging from 0 to 15. We defined two subgroups as follows: the low expression group (scores: 0–5) and the high expression group (scores: 6–15) [37].

The genomic DNA was extracted from the cells or tissue specimens using the DNeasy Tissue Kit (Qiagen). The PCR primers were designed to cover all the exons, intron/exon junctions, proximal promoter and exon 1 region of the full-length NM_153022.2 mRNA transcript (Supplementary Table S1). The PCR product was subjected to Sanger sequencing to determine the presence or absence of mutations. All the mutations were confirmed at least twice, and the sequence tracings were reviewed in the forward and reverse directions by visual inspection.

All the statistical analyses were carried out using the SPSS 18.0 statistical software package. χ2 tests were used to compare the expression rates of C12orf59 in ccRCC and their adjacent normal kidney tissues and to determine the associations between the expression of C12orf59, HIF1α, HIF2α, and VHL mutation status and the clinico-pathological parameters. The bivariate correlations between the variables were calculated by Spearman’s correlation coefficients. The multivariate analysis of the relative effect on survival of each parameter included in the univariate analysis was estimated using the Cox proportional hazards regression model. The overall survival rates were determined according to the Kaplan–Meier method and compared using the log-rank test. P < 0.05 was statistically significant.