*These author contributed equally to this work

Background and Aims: Small cell esophageal carcinoma (SCEC) is a rare malignant tumor. So far, few studies are found to research the effect of radiotherapy (RT) to it. This study is designed to explore the prognostic factors, and analyze survival benefit of RT to patients with SCEC.

Methods: SCEC patients between 1973 and 2012 were searched from the Surveillance Epidemiology and End Results (SEER) data. Clinical factors including age, year, sex, race, stage, surgery, and RT were summarized. Univariate and multivariate analysis were performed to explore the independent prognostic factors of SCEC. Cox regression survival analysis was performed to evaluate the effect of RT to SCEC based on different stages.

Conclusions: Stage, age, year, and RT are independent prognostic factors of SCEC. Survival benefit of RT exists in any disease stage, but is only statistically significant in localized stage of SCEC.

Small cell carcinoma (SCC) is an aggressive progression, high incidence of metastasis, poor prognosis malignancy. It commonly occur in lung, and is usually regarded as a systemic disease [1, 2]. Small cell esophageal carcinoma (SCEC), originated from esophageal tissue, is a rare kind of SCC [3]. Hence, it is hard to get enough patients of SCEC for clinical trial. Current therapeutic schedule for SCEC, a combination of systemic therapy and locoregional treatment, is mainly from the treatment experience of small cell lung cancer (SCLC) [1, 4, 5]. Here, Chemotherapy, as a systemic therapy, is very import for the metastatic ability of SCEC [6, 7]. Radiotherapy and surgery both are locoregional therapy. Their efficacy of SCEC are not very clear, and need further studies [7, 8, 9].

The Surveillance, Epidemiology, and End Results (SEER) Program is a professional cancer related database set up by the National Cancer Institute (NCI) in the United States. It collects and reports cancer incidence and survival data from population-based cancer registries and covers approximately 28% of the US population. With large information of cancer, it is an important tool to analyze rare carcinoma.

In view of above, we used SEER data for the analysis of SCEC. Purpose to explore prognosis factors and efficacy of radiotherapy to SCEC.

A total of 60385 esophagus carcinoma cases were selected from the SEER database, of which, 352 patients (0.58%) were identified as small cell cancer. A detailed listing of the patient characteristics and pathological features was presented in Table 1. From it we found that Compared with non-small cell esophageal cancer (NSCEC), the small cell esophagus cancer (SCEC) was more likely to be distant metastatic (59.12% Vs 38.51%, P < 0.001). Patients with SCEC had a fewer median survival (8 Vs 10 months, P < 0.001) and a higher proportion of women (40.06% Vs 23.86%, P < 0.001) than those with NSCEC. Nearly 50% of patients with SCEC accepted radiation therapy, while only fewer than 10% of them were treated with surgery. So radiotherapy is a most important locoregional treatment method of SCEC.

Table 2: Independence analysis between radiotherapy and other characteristics in SCEC

For the survival analysis of SECE, we excluded patients lived fewer than 4 months to get patients who survived long enough to receive cancer-directed therapy. As surgery and radiotherapy are both local-regional therapy, surgery may be an interference factor when analyzing the survival benefit of radiotherapy. Considering that patients who accepted surgery were very few (only 29 patients), we also excluded patients accepted surgery to eliminate the effect of surgery to radiotherapy. Besides that, unknown stage, race, radiotherapy were also excluded in the survival analysis. Finally, we get 191 patients for survival analysis. Survival effect of clinical characteristics were evaluated with the univariate log-rank test (Table 3). Stage (Figure 1B), and radiation therapy (Figure 1C) were significant associated with OS and CSS (P < 0.001). Age (Figure 1A) was possible to be associated with OS (0.05 < P < 0.1), but of no association with CSS. Sex, race, and year showed no significant association with survival (P > 0.1). 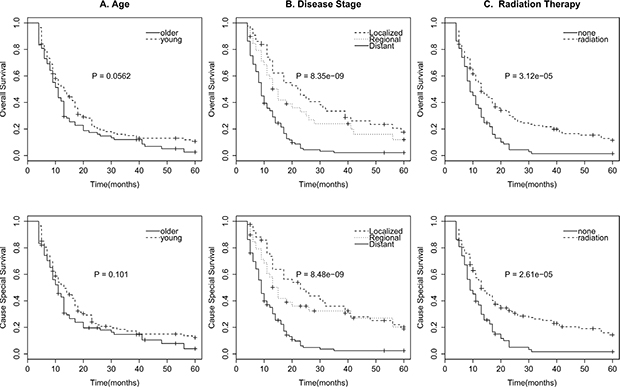 Figure 1: Survival curves in patients according to age (A), Disease stage (B), and radiation therapy (C) of OS and CSS.

After that, Multivariate analysis was performed by the Cox regression model (Table 4). The results showed that stage, year, age, and radiation therapy were all independent prognostic factors of OS and CSS (P < 0.05), while sex and race were not (P > 0.05). Patients younger than 70 years, with lower degree of disease stage, being treated in a later year, and accepted radiotherapy were believed to have a longer cause special survival and overall survival. 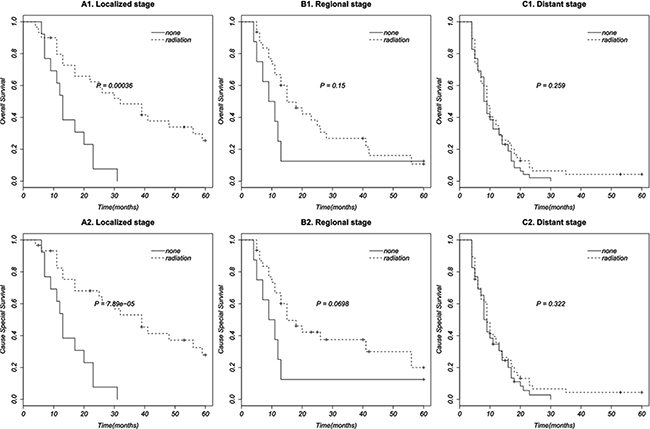 Figure 2: Survival curves in patients according to radiation therapy based on different disease stages.

Small cell esophageal carcinoma is rare, aggressive and poor prognostic. It is reported to be only 0.5%-2.1% of all esophageal cancers [3, 10–12]. This results in few large sample clinical studies of SCEC. Currently, clinical treatment strategies of SCEC are very limited and full of contradiction [3, 5, 6, 13]. As SCC is always regarded as a systemic disease [1], chemotherapy is a unique systemic therapy of multimodality treatment of SCEC [1, 6, 7, 14–16]. Thus, main dispute of treatment of SCEC is in the locoregional therapy. Many studies [8, 17, 18] recommend chemotherapy and surgery as primary treatment of limited disease, while others [9, 19] suggested chemoradiotherapy was better, also someone [3, 7] discovered similar effect of chemotherapy with radiotherapy or surgery. To our knowledge, so far, there is still not a clear evaluation of radiotherapy to SCEC, neither in limited stage, nor in extensive stage.

One should be mentioned is that chemotherapy was not enrolled in the survival analysis. It was due to the lack of the record of chemotherapy in the SEER database. For the results that SCEC is always regarded as a systemic disease and suggested to be treated with multimodality treatment for many years [12, 14, 20, 21], we have reasons to assume that most patients who lived more 3 months had enough time to accept chemotherapy. Thus, in this study, we excluded all patient who lived fewer than 4 months to minimize the effect of chemotherapy to radiotherapy.

SEER data between 1973 and 2012 [“Incidence - SEER 18 Regs Research Data + Hurricane Katrina Impacted Louisiana Cases, Nov 2014 Sub (1973–2012 varying)”] were chosen for this study. The latest National Cancer Institute’s SEER*Stat software (Version 8.2.1) was used for the identity of patients with small cell histology (Histologic/Behavior codes: 8041/3 and 8043/3) and esophageal tumor (Site recode: Esophagus). Survival data were extracted at 1-month intervals for a minimum follow-up of 4 months and a maximal follow-up of 60 months to exclude patients who did not survive long enough to receive cancer-directed therapy. Those who accepted surgery were also excluded for reducing the effect of surgery to radiotherapy.

This study was based on public data from the SEER database. The reference number we obtained for the permission to access research data files was 10612-Nov 2014. No human subjects or personal identifying information were used in this study. No informed consent was require in this study. This study was approved by the Review Board of Huai’an First People’s Hospital, huai’an, China.

Chi-square test was used to analyze the difference between SCEC and NSCEC, and the correlation between radiotherapy and other factors. Univariate analyses with log-rank test and multivariate analysis with cox proportional hazards regression model were performed to examine the clinical factors’ association with cause-specific survival (CSS) and overall survival (OS) respectively, with a statistically significant difference at p < 0.05. The factors included age, sex, race, stage, and radiation therapy. Finally, cox regression analysis of radiotherapy were performed based on different disease stages. All analysis were performed in the population with a whole record of analytical variable. All analysis were performed with survival package [22, 23] of R [24] (version 3.2.1).

Thanks are due to Tao Li, Changhua Yu, Quan Zhang, Honglei Luo, Jin Peng, Dongcheng He, and Fuzhi Ji for their assistance with literature research of this paper.

18. Madroszyk A, Egreteau J, Martin L, Queneau PE, Bosset JF, Merrouche Y. Small-cell carcinoma of the esophagus: report of three cases and review of the literature with emphasis on therapy. Annals of oncology. 2001; 12:1321–1325.