Chemokine (C-C motif) receptor 8 (CCR8), one member of the C-C motif chemokine receptor superfamily, was initially identified in activated T helper type 2 (Th2) cells as a receptor of CCL1/I-309 [1, 2]. The CCL1-CCR8 axis is involved in the pathological processes of various inflammatory diseases. This chaining is believed to mediate Th2 cell and Treg cell recruitment in allergic inflammation such as asthma and atopic dermatitis. CCR8+ macrophages also play significant roles in postoperative peritoneal adhesion development [3]. The involvement of CCR8 in these diseases suggests that it is a unique modular in inflammatory/allergic responses by inducing tissue damage and remodeling. Recently some studies focusing on the behavior of CCR8 in carcinogenesis were conducted and have implicated an anti-apoptosis effect of CCR8 in lymphoma and T cell leukemia through an autocrine manner [4]. Unexpectedly, Suvendu et al reported that CCL1 produced by lymphatic endothelial cells could facilitates CCR8+ tumor cell entry into the open subcapular sinus as well as subsequent migration into the lymph node cortex [5]. These data identify a novel mechanism of regulation of tumor cells migration by virtue of CCR8. However, whether CCR8 plays a role in clinical recurrence of patients with solid tumors is not yet determined.

Renal cell carcinoma (RCC) represents 3~4% of adult solid tumors. It is frequently diagnosed with synchronous or metachronous metastases and has an estimated age-standardized mortality in Europe of 2.6% [6]. The major histologic subtypes of RCC is clear-cell RCC (ccRCC, 75-85%), of which more than one tenth patients would occur fatal recurrence within 5 years after traditional partial or radical nephrectomy. Although pathologic factors such as coagulative necrosis, metastatic status, sarcomatoid features, and lymphovascular invasion (LVI) have been extensively addressed, their impacts on ccRCC prognosis are however inconclusive [7]. Following surgery for localised RCC some recent studies rely on models combining standard models with molecular biomarkers to make progress in better stratifying recurrence risk to aid patient counselling, personalize follow-up, and target adjuvant treatment trails [8, 9]. Herein sustained studies to evaluate the prognostic value of genetic and proteome signature in RCC patients are unremittingly on going.

Previous works by Evgeniy et al have indicated that CCR8+ myeloid cell subset is expanded in RCC patients and that their accumulation composes cancer-related inflammation and could contribute to tumor cells immune evasion during metastatic cascade by means of Treg cells aggregation. Furthermore, blockage of CCL1-CCR8 signals may provide an attractive strategy for potential therapeutic intervention [10]. In view of the likelihood of CCR8 expression on tumor cells as it was reported to trigger tumor cells migration or invasion through lymphatic vasculature, and the open data from The Cancer Genome Atlas that CCR8 mRNA are unregulated in 16% ccRCC cases (61 of 392), we hypothesized that intratumoral overexpression of CCR8 may serve as a potential prognosticator of ccRCC recurrence.

In this study, we analyzed the expression of intratumoral CCR8 and the impact of CCR8 expression on recurrence-free survival (RFS) in a large cohort of ccRCC patients without synchronous metastatic diseases.

After applying initial exclusion criteria, a total of 472 patients with pT1-3N0M0 ccRCC underwent nephrectomy from 2008 to 2009. Mean age in the entire group was 55.1 yr (range 21-86). Of these patients, 123 patients (26.1%) had positive CCR8 tissue staining (Figure 1A). Table 1 compares their clinical and pathologic features. Overall, no significant difference of age and gender between CCR8+ and CCR8- groups, while higher Fuhrman grade, presence of LVI and necrosis were significantly associated with positive CCR8 expression (P = 0.017, 0.005, 0.002, respectively).

Outcome estimation is limited to the largest survival time when it is censored.

*Fisher’s exact test to assess the correlation between variables and CCR8.

‡Log-rank test of equality of survival distributions for the different levels of CCR8. 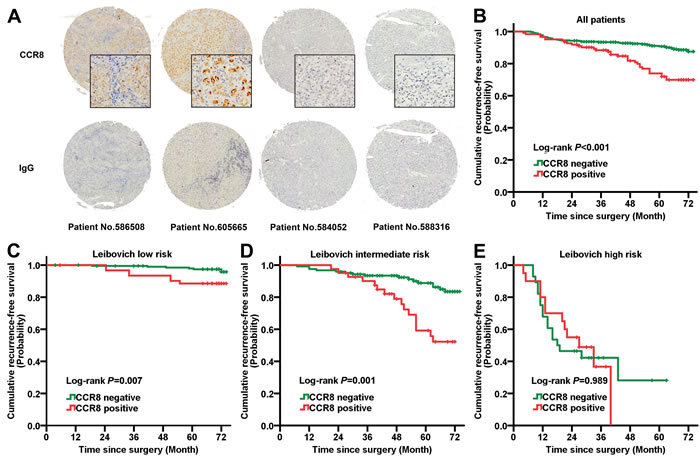 Clinical outcomes and association of CCR8 expression with survival

*The bootstrap validate model is calculated on the basis of adjusted survival function for age and gender by the time of surgery. Bootstrapping with 1000 resamples were used. 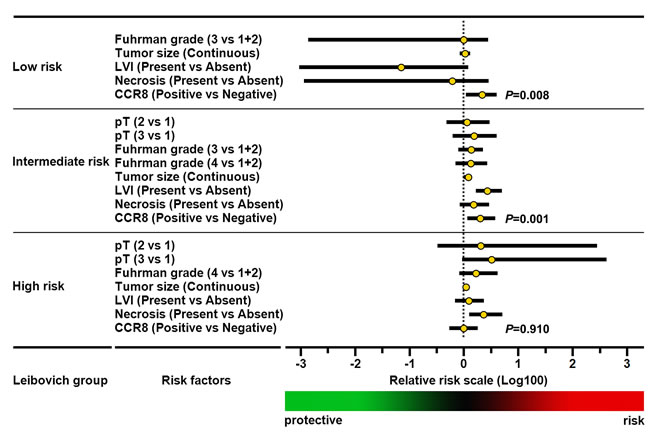 Construction and validation of prognostic nomogram for RFS

A nomogram that incorporated the significant prognostic factors concluded from validated multivariate analyses was established (Table 2 and Figure 3A). Considering the wide variation on confidence interval of sarcomatoid feature, which may resulted from their few effective events, we excluded sarcomatoid feature in the final nomogram without compromising the robustness of the model. The nomogram illustrated pathological T stage, Fuhrman grade and tumor size as sharing the largest contribution to prognostication (weighted ratio = 0.189, 0.237, 0.227, respectively). Intratumoral CCR8 expression showed a moderate impact on outcome (weight ratio = 0.071). Each level of these variables was assigned a score on the scale, and the total score could be easily used to determine the estimated probability of survival at different time point.

C-index, 95%CI and AIC are calculated from 1000 bootstrap samples to protect from overfitting.

To date > 5600 separate reports related to RCC outcome prediction have been published. Unfortunately, the prognostic assessment remains controversial and no remarkable progress was made on validating and applying new parameters in routine clinical practice [7]. Many recent prospective studies screened and reported molecular signatures to join existing prognostic models, which represent underlying dysregulation of biological functions associated with disease aggressiveness, including immune response [8, 11, 12]. A good way to select these prognostic factors representing cancer-related immune response may be considering the biological functions of chemokines or cytokines and their sources or targeting cell types, which could help us to subgroup these factors functionally and then select appropriate agents according to their performance.

Chemokine (C-C motif) receptor (CCR8) is one of the novel candidates of tumor prediction because there have been various literatures reported the special behaviors of CCR8 in different pathogenesis. CCR8 was reported to be expressed on Treg cells which may trigger immune inhibition in several inflammatory diseases [14]. Furthermore, evidence rose that endothelial-derived spindle cells of human Kaposi sarcoma acquire chemotaxis through its intrinsic CCR8 expression [15]. The only report that directly indicated the pro-tumorigenic expression of CCR8 on tumor cells was conducted by Das et al, which showed that blocking CCR8 function could inhibits CCR8+ melanoma cell egress from afferent lymphatic into lymph node [5]. However, the expression of CCR8 in RCC remained unclear, despite a recent work showed that up-regulated expression of CCR8 is detected within RCC tissues and primarily limited to CD11b+ tumor associated macrophages, while their work enrolled limited 22 RCC patients [10].

In this study, we detected the expression in tumor cells from a segment of non-metastatic ccRCC cases detected and confirmed the intratumoral CCR8 expression in 26% (123 of 472) ccRCC tissue samples, comparative with that of 16% reported by 2013 TCGA cohort data. Analogously, we demonstrated a significant correlation between positive CCR8 expression and the likelihood of post-operative recurrence by competing risk analyses. In order to further strengthen the prognostication impact of CCR8 for clinical recurrence, we developed a post-operative nomogram to predict long-term recurrence-free survival of non-metastatic patients based on 6-year follow-up. The built-up model offer further benefit in addition to the current combined clinicopathologic stratification tools - Leibovich score, which is constructed by pathologic T stage, N stage, tumor size, nuclear grade and histologic necrosis [17]. Of particular interest, we found that this improvement mainly occurred in organ-confined patients or low risk patients defined by UISS and SSIGN models. This may help us to inform postoperative management of early-stage patients for whom the conventional T stage and Fuhrman grades may have weaken prediction effects, as well as to help recognize the patients with low-risk tumor who would ultimately progress and succumb to their disease as an aid of conventional abdomen imaging techniques [18].

As far as we have found, CCR8 is the only C-C motif family chemokine receptor that is dominantly expressed on renal tumor cells instead of infiltrating immune cells while exerting profound impact on recurrence-free survival in localised patients, which means we can easily judge the IHC staining results by positive/negative dichotomy either artificially or digitally, with few effect from intratumoral heterogeneity and immune cell infiltrating susceptibility. This findings may indicated CCR8 as a potential agent candidate of C-C motif chemokine receptor family. It should be acknowledged that this study lack independent external validation, and it seem likely that the study design of retrospectively analyzing post-nephrectomy tumor samples, particularly with the intratumoral heterogeneity of regimens, would hinder the robustness of predictive biomarkers, further experimental studies are also required to identify the detailed role of CCR8 in ccRCC. Nevertheless, we should notice that attempts to identify pharmacological antagonists of CCR8 have been going on, and our work may implicate therapeutic targets of those small molecule inhibitors used on adjuvant therapy for non-metastatic ccRCC [19].

The primary outcome of interest was recurrence-free survival (RFS). RFS was defined as the time from surgery to first renal cell carcinoma recurrence (local or distant metastases, identified by imaging, biopsy, or physical examination). According to clinicians and archived files, occurrences were censored if patients died without clear evidence of recurrence or if the patient was alive at end of follow-up. Follow-up data for all patients were obtained from most recent medical review and ended in Mar 2015. All patients were examined routinely every 5-6 months during the first 5 years of follow-up and annually thereafter. The study did not include any patients with recurrence within 2 months of surgery.

Associations between CCR8 expression subgroups versus clinicopathologic parameters were evaluated using Fisher exact test and Wilcoxon rank-sum test. RFS was assessed and graphically illustrated using Kaplan-Meier and log-rank test was used for comparing different scoring categories. Independent associations between RFS and assessed clinicopathologic predictors were evaluated using multivariate Cox proportional hazards regression models. Prognostic parameters that were found to be associated with recurrence risk in the development study were further narrowed down to form a nomogram by the strength of the associations with recurrence in both univariate and multivariate analyses. The concordance index (C index) and Akaike’s Information Criteria (AIC) were used to assess the predictive accuracy and sufficiency of different models, while Hanley-McNeil test was used to compare between C index [24, 25]. To reduce overfit bias and internally validate the predictive accuracy estimates, multivariable models and C index calculations were subjected to 1000 bootstrap resamples.

25. Hanley JA and McNeil BJ. A method of comparing the areas under receiver operating characteristic curves derived from the same cases. Radiology. 1983; 148:839-843.