Background: The objective of this study is to verify the prognostic value of pretreatment plasma Epstein-Barr viral deoxyribonucleic acid (pEBV DNA) levels in nasopharyngeal carcinoma (NPC) patients to complement TNM classification based on the application of the intensity-modulated radiotherapy (IMRT) technique.

Methods: In total, 1467 patients staged at I–IVa–b (M0) and treated with IMRT were retrospectively analyzed at our cancer center from January 2007 to December 2010. Patient survival among different stages and EBV DNA levels were compared.

Conclusion: pEBV DNA is a strong prognostic factor for patients with NPC when complemented with TNM staging in the era of IMRT application.

Nasopharyngeal carcinoma (NPC) is a rare disease in Western countries, whereas it is endemic in Southern China [1]. According to NCCN guidelines, treatment for early (stage I) disease should be RT alone, though concurrent chemoradiotherapy (CCRT) with or without adjuvant chemotherapy is recommended for advanced (stages II–IVa–b) diseases. Currently, the TNM staging system is crucial for predicting the prognosis of NPC and guiding treatment management for different stages. However, as highly variable treatment outcomes have been reported in patients at the same stage [2, 3], reliable biomarkers that complement the present TNM staging system are very important for more accurate prognosis and more precise guidance of treatment decisions.

It has long been established that the pretreatment EBV DNA (pEBV DNA) level is associated with patient survival and can serve as a potential powerful biomarker for the prognosis of patients with NPC [4–16]. Indeed, a study by Leung et al. [4] showed that the pEBV DNA load is a prognostic factor in NPC independent of TNM staging, with the combined interpretation of EBV DNA and TNM staging data leading to changes in the risk definition of patient subsets. However, in that study, only 1 patient was treated by intensity-modulated radiotherapy (IMRT). With the advancement of technologies, modern irradiation for NPC should be IMRT with inverse RT planning, and it is not difficult to justify the implementation of IMRT as an excellent therapeutic intervention for improving local and regional control and patient survival [17–23]. Recently, a study conducted by Chen M et al. suggested that NPC patients with a high pEBV DNA level had worse disease-free survival (DFS) at only two years of follow-up time [24]. Thus, in the era of IMRT, it remains very important and necessary to demonstrate the clinical significance of pEBV DNA as a complement to TNM staging.

In this study, we report a large retrospective study involving 1467 patients with a median follow-up of 47 months after radiotherapy and offer more accurate, rigorous and practical information for clinical use on the basis of these data.

Among 1503 cases, a total of 1467 patients in stages I to IVa–b met the criteria and were enrolled in this large cohort retrospective clinical study. Table 1 listed the pretreatment characteristics of the 1467 NPC patients according to their levels of EBV DNA (a low EBV DNA group with EBV DNA < 4000 copies/ml and a high EBV DNA group with EBV DNA ≥ 4000 copies/ml). We observed no statistically significant differences in characteristics of age, sex, Eastern Cooperative Oncology Group (ECOG) and World Health Organization (WHO) type between the high and low EBV DNA groups, except for the T classification, N classification, overall stage and mode of treatment. The median follow-up time was 47 months (range, 1–103 months). Among these patients, 98 (6.7%) developed local and/or regional recurrences, 179 (12.2%) developed distant metastases, and 21 (1.4%) showed both local/regional and distant metastases. A total of 149 (10.2%) deaths were recorded at the date of the last follow-up.

¶CRT, chemoradiotherapy with or without sequential chemotherapy (induction or adjuvant).

#RT, radiotherapy with or without sequential chemotherapy (induction or adjuvant).

We determined the cut-off value of pEBV DNA concentration for OS by a receiver operating characteristic (ROC) curve and then obtained a value of 4340 copies/ml, similar to previous studies [10]. Because OS is the most commonly used endpoint for patient outcome in evaluating potential prognostic factors and the other cut-off points for PFS, DMFS and LRFS in our study were also close to the OS value, we selected 4000 copies/ml as the pEBV DNA cut-off point to define high and low EBV DNA levels for the overall endpoints. 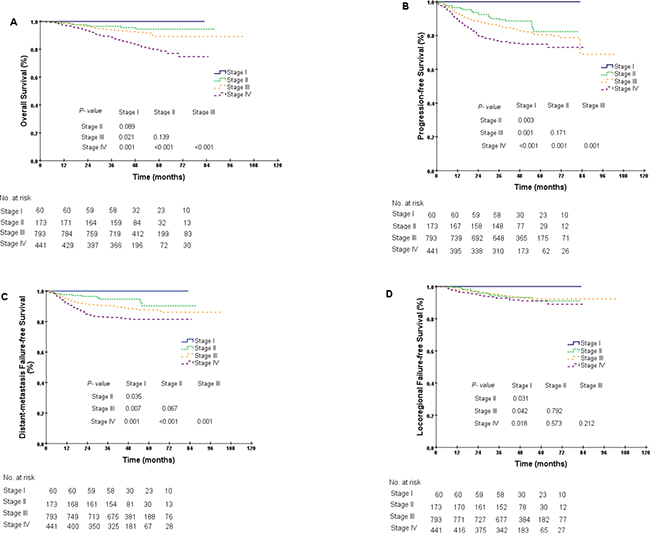 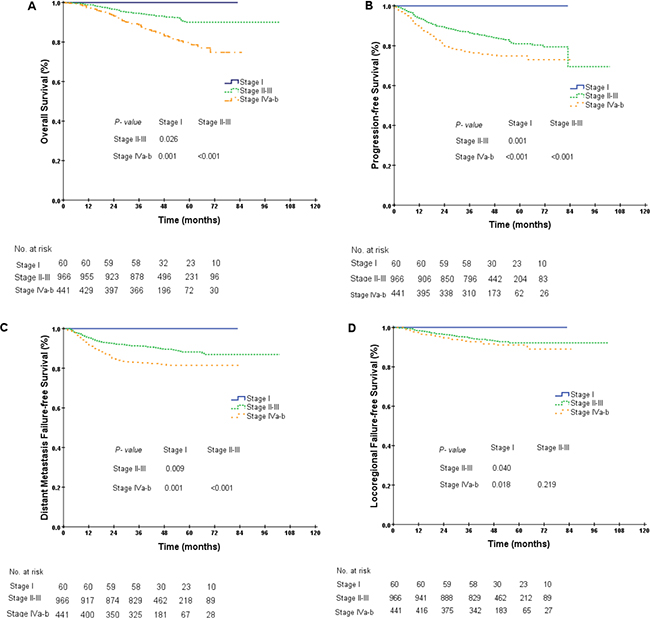 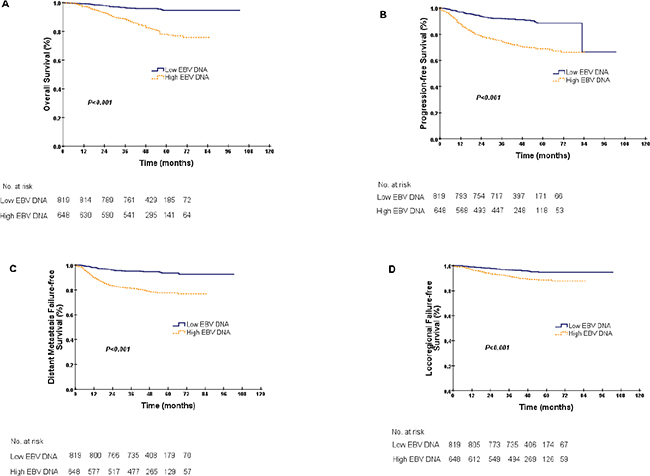 Table 2: Survival comparisons between among subgroups

All the 5 year survival rates were calculated using the Kaplan-Meier method.

*The Wald test was used to test P values.

#RT, radiotherapy with or without sequential chemotherapy (induction or adjuvant).

¶CRT, chemoradiotherapy with or without sequential chemotherapy (induction or adjuvant).

To the best of our knowledge, our current study utilizes the largest sample size to verify the biomarker of EBV DNA as an independent prognostic factor for NPC patients, regardless of TNM staging, and also provides useful data for the stratification of patients into different risk groups for treatment selection on the basis of the application of IMRT. The data we obtained suggested that a high level of EBV DNA is an independent adverse prognostic factor for patient survival, in accordance with previous studies [4, 5, 10, 15]. Our data also underlined the importance of re-classifying patients into four subgroups when combining the EBV DNA level with the TNM staging system.

Our study reveals once again that EBV DNA is attractive and useful in medical practices. Two previous studies have suggested that EBV DNA has better prognostic value when combined with the TNM staging system. First, Leung and colleagues [16] performed a prospective study to assess the prognostic effect of pEBV DNA in patients with early-stage NPC, and the results revealed that the probability of distant failure was significantly higher in patients with high EBV DNA levels than in patients with low EBV DNA levels (P = 0.0001). The authors concluded that the pretherapy EBV DNA level could identify a poor risk group with a probability of distant failure similar to patients with advanced-stage disease. Soon thereafter, Leung et al. [4] again reported the pretherapy EBV DNA load as an independent prognostic factor of the TNM staging system in NPC, concluding that EBV DNA could lead to an altered risk definition of patient subsets when combined with TNM staging, with improved risk discrimination in early-stage disease. However, one point we should highlight is that no patients in the first study and only one patient in the second study received IMRT.

Although this study has many clinical implications, we should be clear that it is a retrospective study with its own limitations. First, our study was conducted in a single institution. Second, longer follow-up may be needed to accurately reflect cancer recurrence or death. Third, more studies of EBV DNA levels complemented by TNM staging in the era of IMRT, especially prospective studies, should be performed in the future.

In summary, this study confirmed that pEBV DNA is a strong prognostic factor for patients with NPC when complemented with TNM staging in the era of IMRT application. It is advised that patients be segregated into four risk groups and suggested that different intense treatment protocols may be considered. The role of pEBV DNA in guiding individualized clinical trial is needed to be evaluated.

This work is a retrospective study involving a total of 1503 patients presenting to the institute with previously untreated NPC from January 2007 to December 2010. Inclusion criteria included the following: (1) patients with biopsy-proven WHO type II or III; (2) ECOG of 0 to 2; (3) receiving IMRT treatment; (4) adequate hematologic, renal, and hepatic function. Exclusion criteria were as follows: (1) history of previous anticancer therapy, (2) pregnancy or lactation; (3) a history of previous or synchronous malignant tumors; (4) the presence of a primary distant metastasis; (5) patients lost during follow-up or no available EBV DNA data. The routine staging workup prior to treatment consisted of a detailed history, physical examination of the head and neck, nasopharyngeal endoscopy, magnetic resonance imaging (MRI) and/or computed tomography (CT), complete blood counts, biochemical profile, pretreatment plasma testing for EBV DNA level, chest X-ray, abdominal ultrasound, whole-body bone scan, and dental evaluation. As the cancer stages of some of the patients were staged according to the 6th edition of the International Union Against Cancer (UICC) and the American Joint Committee on Cancer (AJCC) staging-system manual, we reclassified patient stages using the 2010 UICC/AJCC staging system (7th edition).

All patients included in this study were treated with IMRT technology. Similar to the references RTOG 0615 [18] and RTOG 0225 [17], we delineated the target volumes using the institutional treatment protocol, as previously described [30–32], in accordance with the International Commission on Radiation Units and Measurements reports 50 and 62.

All patients were evaluated at the end of the irradiation treatment. In addition, the patients were required to be followed up every 3 months during the first 3 years, every 6 months during the next two years, and then annually thereafter. At each follow-up visit, endoscopy, physical examination, basic chemical profiles chest X-ray, abdominal ultrasound and head and neck MRI were performed every 6 months. Bone scan and CT of the chest or abdomen and even PET/CT were performed when clinically indicated.