Conclusion: Our study demonstrated a notable improvement of PFS-6, PFS and OS in ADV-TK treated group, and the efficacy and safety appear to be comparable to other reported treatments used for recurrent HGG. ADV-TK gene therapy is therefore a valuable therapeutic option for recurrent HGG.

Treatment options for patients with recurrent GBMs and AAs remain limited. The treatments include resection with or without carmustine (bis-chloroethylnitrosourea, BCNU) wafer placement in selected patients with local recurrence, radiotherapy, chemotherapy, the anti-angiogenic agent bevacizumab alone or in combination with chemotherapy, or alternating electric field therapy [1]. Surgery prolongs survival only to a limited degree, and the benefits of repeated radiotherapy are unclear. The repeated administration of TMZ with the same schedule of the initial treatment has not generally been recommended in recurrent patients due to the risk of cumulative toxicity and to the possibility of chemotherapy resistance. Development of alternative treatment modalities, preferably with mechanisms of action dissimilar to those of standard therapies, is therefore urgently needed.

Building on these promising results, an international, open-label, randomized, parallel group multicenter phase III clinical trial using the first-generation replication-deficient adenovirus containing the cDNA for HSV-TK (sitimagenecer adenovec; Cerepro®, Ark Therapeutics Ltd., London, UK) for newly diagnosed operable HGG patients was reported recently [9]. Their results showed that additional Cerepro® therapy prolonged median time to death or re-intervention of the patients, there was no difference between groups in terms of overall survival (OS), and patients received Cerepro® suffered more treatment-related adverse events, such as hemiparesis and aphasia. Although this study made a step forward from the earlier retrovirus-based phase III study, the limitation of the efficacy of Cerepro® may due to the transduction efficiency.

In 2007, our research group reported the encouraging clinical results of ADV-TK/ganciclovir therapy in advanced hepatocellular carcinoma (HCC). This phase II clinical trial revealed increased survival and safety in the non-vascular invasion HCC patients who received liver transplantation and ADV-TK/ganciclovir adjuvant gene therapy; the 3-year overall survival (OS) rate was 100% and the recurrence-free survival (RFS) rate was 83.3% [10]. In 2009, we reported a phase I clinical trial with ADV-TK/GCV therapy in 18 patients with head and neck cancer and nasopharyngeal carcinoma (NPC), with the aim to determine the safety profile, humoral immune response and biologic activity of a single intra-tumor injection of ADV-TK followed by GCV therapeutic approach [11]. Our findings suggested that ADV-TK gene therapy can be administered safely to cancer patients, and achieved a local response with few environmental effects.

Intra-arterial chemotherapy is a strategy of dose intensification that results in more concentrated and localized delivery of chemotherapy to brain tumors. Since ADV-TK showed good tolerance and safety, we designed a randomized, open-label, multicenter, phase II clinical trial to assess the anti-tumor efficacy and safety of intra-arterial cerebral infusion of ADV-TK in combination with systemic intravenous ganciclovir in patients with recurrent malignant glioma. 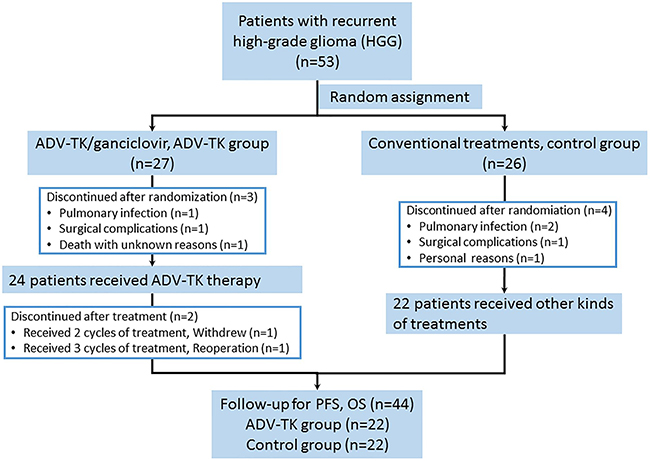 Objective response and overall clinical benefit in the ADV-TK group

All 22 patients in the ADV-TK group received objective-response evaluation at the end of the second treatment cycle. No complete response was observed in any patient. One patient was partial response (4.5%), 14 patients achieved stable disease (63.6%), and disease progression was observed in seven patients during treatment (31.8%). The clinical benefit (complete response, plus partial response, plus stable disease) of ADV-TK therapy was 68.2% at the end of the second cycle.

ADV-TK treatment was well tolerated, and no treatment-related severe adverse events were observed. Mild catarrhal symptoms were reported in 5/22 patients who received ADV-TK therapy. Slight fever with no chills was also observed after injection of ADV-TK during the first three days in the same five patients (temperature range 37.3-38.3 °C). Three of these five patients also suffered from light headache. All of these symptoms subsided within six days. One patient in the ADV-TK group experienced cerebral vasospasm 10 days after ADV-TK treatment. Hematological toxicity mainly consisted of grade 1 to 2 neutropenia, with only one patient in each group developing grade 3 neutropenia. There was no evidence of liver or kidney dysfunction caused by ADV-TK in our study with no significant difference between two groups. Toxicity experienced only during the first eight weeks of treatment was compared (Table 3).

Table 3: Toxicity of adv-tk in patients with malignant recurrent glioma

Tumor-treatment strategies for recurrent HGGs remain imprecise. The lack of randomized studies comparing use of these agents with best supportive care may be an important limitation to determining the most effective tumor-treatment strategy. Recently, clinical trials demonstrating improved PFS-6 rates of up to 50% and response rates of up to 57% have resulted in accelerated United States Food and Drug Administration (FDA) approval of bevacizumab in patients with recurrent glioblastoma [1], but its use is associated with toxicities, eventual treatment resistance, and the potential for progression to a more invasive tumor phenol type. The unique combination of the high mitotic activity of tumor cells and the mostly post-mitotic environment of the adult brain, as well as aggression within the local environment within the closed compartment of the central nervous system [12], have been the subjects of many gene-therapy studies. Table 4 contains the most recent and clinically relevant approaches to virus-mediated gene therapy of recurrent HGGs. Although all of these clinical trials were phase I to II and included limited numbers of patients, their encouraging results highlight the general safety of the approach and their potential role in the treatment of recurrent HGGs.

Our phase II, randomized clinical trial demonstrated clear progression-free survival and overall survival benefit associated with ADV-TK gene therapy, which was also shown to be safe. Even though our trial includes a small number of patients, to our knowledge this patient group is the largest of those included in adenovirus gene-therapy clinical trials with recurrent HGGs.

The results of our current investigation present an advantage in the strategy of administration of ADV-TK gene reagent. In order to disrupt the blood-brain barrier, mannitol was administrated just before every ADV-TK/ganciclovir intra-arterial infusion. Mannitol has been used as regular clinical treatment for intracranial hypertension for many years [24, 25]. As early as 1972, Raport et al proposed the theory of application of hypertonic solution to open the blood-brain barrier [26]. Later, Neuwelt et al applied the theory in the intra-arterial chemotherapy in brain tumor [27]. In our study, ADV-TK/ganciclovir intra-arterial infusion brought it's superiority into full efficiency by assist of mannitol administration. The values of PFS-6 rate, median PFS and median OS in our study were significantly higher than those among the relevant virus-mediated gene therapy clinical trials (Table 4), and also better than those of the clinical trials with chemotherapy and NovoTTF-100A (Supplementary Table).

We previously reported two clinical trials supporting the efficacy and safety of ADV-TK gene therapy [10, 11]. The adverse effects in present investigation were consistent with our previous studies. Fever was one of the most common treatment-related adverse events and may be due to a physical immune response to the vector. Another adverse effect was hematological toxicity which mainly consisted of grade 1 to 2 neutropenia. There were three patients had light headache after treatment which was supposed to the physiological reaction of mannitol administration. Fortunately, all of these responses were transient and easy to tolerate.

The number of patients enrolled in the current clinical trials is the largest patient population among the virus-mediated gene therapy trials in Table 4, but is still small size of clinical trials. The next we need to do is to increase the number of patients and compare with a single agent or a combination regimen containing TMZ, bevacizumab, or irinotecan. Concerning local gene therapy, the greatest shortcoming of non-replicating adenovirus gene therapy appears to be the low transduction efficiency of the vector and its limited distribution. Recently, our research group developed a series of conditionally replicating virus vectors [28–30], by which therapeutic gene should express more effectively in target tumor cells. It will be a good choice for further studies of ADV-TK gene therapy in the treatment of malignant tumors.

This study was conducted in accordance with the Declaration of Helsinki. All participating institutions obtained local ethics approval and written informed consent from all patients. This trial is registered with ClinicalTrials.gov. NCT00870181.

From November 2009 to December 2012, patients were enrolled at Beijing Tiantan Hospital, Beijing Chao-Yang Hospital, and Beijing Friendship Hospital. Eligible patients were adults of either sex with histologically confirmed WHO grades 3 to 4 malignant glioma (glioblastoma multiforme, anaplastic astrocytoma, or anaplastic oligodendroglioma) who had just received diagnoses of recurrence or progression based on clinical or radiological evidence upon presentation to the centers. Patients were fit for intra-arterial infusion and intravenous chemotherapy, with adequate hepatic, renal, and hematologic function. Evidence of recurrence or progression was confirmed by evaluable enhancing recurrent tumor on contrast-enhanced magnetic resonance imaging before and after the treatment. Patients with primary WHO grade 1 to 2 glioma were pathologically verified with disease recurrence or progression to WHO grade 3 to 4. Additional eligibility criteria included legal age ≥18 years, an Eastern Cooperative Oncology Group performance ≥2, chemotherapy completion ≥4 weeks prior, and recovery from drug-induced toxicities. The exclusion criteria were active pregnancy, prior gene therapy, second primary tumor, gravidity, lactation, hypersensitivity to antiviral drugs, immunological deficit, active uncontrolled infections, or requiring treatment with warfarin or any other anticoagulants.

Patients were randomly allocated to either the ADV-TK group or to the control group according to the random table kept in Tiantan Hospital affiliated with Capital Medical University (Beijing, P.R. China). ADV-TK is a chimeric human group C adenovirus (ADV5) that expresses the gene encoding HSV-TK under the control of a Rous sarcoma virus long terminal repeat promoter, which is inserted in the region of the excised E1 adenoviral genes. In the ADV-TK group, ADV-TK (Tian Dakang Co.) was administered via intra-arterial cerebral infusion. Based on the toxicity results from our previous study, a total of 1 × 1012 viral particles of ADV-TK was administered in the current clinical trial [10].

Systemic ganciclovir therapy was delivered at a dose of 5 mg/kg intravenous, every 12 h at 36 h after ADV-TK therapy for 14 days. Mannitol (25% 1.4 M mannitol, 250 ml/15 minutes) was given just before every ADV-TK /ganciclovir infusion to disrupt the blood-brain barrier. The ADV-TK/ganciclovir treatment was repeated every 21 days for at least two cycles. Patients in the control treatment group received surgery or systemic chemotherapy or palliative care. Imaging (using the same contrast-enhanced imaging method as the baseline scan) was repeated on clinical progression wherever possible; scans were also performed at baseline and at the end the second and fourth cycles for the ADV-TK group, with progressive disease defined as a ≥25% increase in two-dimensional tumor size. Safety was assessed according to National Cancer Institute Common Terminology Criteria for Adverse Events (Version 3.0).

The primary end point was PFS-6. Secondary end points included PFS, OS, safety, objective response rate (complete response, partial response, stable disease, and progressive disease), and clinical benefit (complete response, plus partial response, plus stable disease). PFS and OS were calculated from the day of randomization until the event (progression confirmed either radiologically or clinically if scan not performed or death) happened or until the patient was censored. Event-free patients were censored on the date of last follow-up.

ROLE OF THE FUNDING SOURCE