Trop2 is overexpressed in gastric cancer and predicts poor prognosis

Gastric cancer (GC) is a leading cause of global cancer-related mortality [1]. GC prevalence is highest in Asia, and the majority of GC patients are diagnosed at an advanced stage [2–3]. Due to the high rates of metastasis and recurrence, the prognosis of GC patients is poor: 5-year survival rates are less than 20% [4]. Helicobacter pylori (H. pylori) infection and intestinal metaplasia (IM) are common complications in gastric cancer patients [5–8]. Identifying new genetic markers to help diagnose GC earlier will help to improve cure rates and reduce complications, including H. pylori and other chronic gastric infections.

Trop2 increases tumor recurrence, progression, and invasiveness [18–21], and has been used as a prognostic marker in several types of cancer [22]. It is overexpressed in oral squamous epithelial cell carcinoma [13], breast cancer [18], colon cancer [23], pancreatic cancer [24], and cervical cancer [25]. It is also upregulated in certain malignant hematological diseases, including Non-Hodgkin’s lymphoma (NHL) and leukemia [26]. Antibodies such as human anti-Trop2 antibody IgG and fragment Fab, which reduce Trop2 expression, also inhibit cell proliferation, induce apoptosis, and delay migration in some cancer cell types, both in vitro and in vivo [27–31].

The role of Trop2 in GC is less well understood. Muhlmann et al. detected elevated Trop2 expression in a group of 104 Austrian patients with intestinal-type carcinomas [14]. Because the incidence and lethality of GC differs between populations, it would seem useful to explore Trop2 expression levels in both benign and malignant gastric tissues from different patient groups. In this study, we analyzed Trop2 expression in primary GCs from 600 Chinese patients and compared it with expression in matched neighboring non-tumor tissues. We also examined the relationship between Trop2 expression, clinical characteristics, and overall survival in GC. 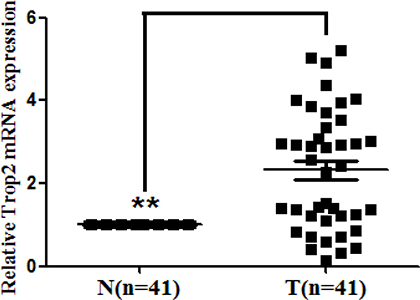 Trop2 protein, which was localized to the membrane and cytoplasm using immunohistochemistry, was overexpressed in GC tissues (Figure 2). Using the x-tile software program for TMA data analysis (http://www.tissuearray.org/rimmlab), we defined high and low Trop2 expression levels based on overall survival in GC patients. A cutoff value of 130 cells was selected: counts between 0 and 130 were considered low expression, while counts of 131 to 300 were considered high expression. All Trop2 protein levels were classified as “Low” or “High” using these cutoff values prior to analysis. 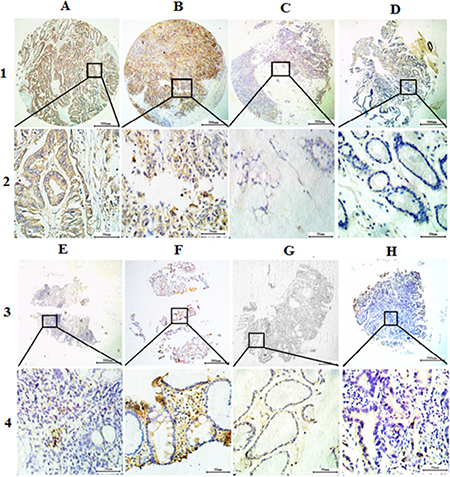 bothers include everything besides tubular and papillary adenocarcinoma.

Trop2 protein overexpression was associated with poor prognosis in GC 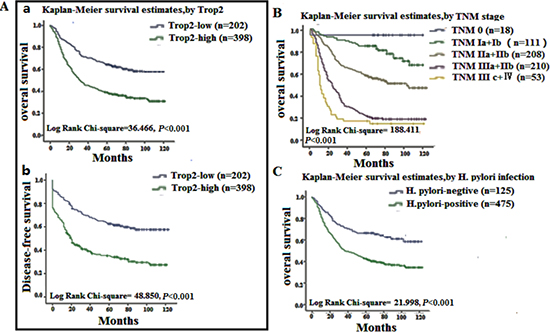 In this study, we used qRT-PCR and immunohistochemistry to examine Trop2 mRNA and protein levels in GC tissues from Chinese patients. Trop2 mRNA levels were much higher in GC tissues than in matched neighboring non-tumor tissues, as is the case in other tumors [34]. However, the relationship between mRNA and protein levels is not strictly linear and involves spatial-temporal disparities. To confirm that protein levels were also elevated in GC, we examined a microarray that included 830 samples of gastric tissue, 600 of which were GC, and the associated clinical and follow-up data. Trop2 protein was localized to the cell membrane and cytoplasm. As was the case with mRNA, high Trop2 protein expression was detected in a larger proportion of cancerous tissues (66.30%) than in neighboring non-cancerous tissues (43.8%). Furthermore, Trop2 overexpression predicted poor overall and disease-free survival. This is similar to the findings of Muhlmann et al., who reported that increased Trop2 expression accompanied poor disease-free and overall survival rates in patients with advanced intestinal-type carcinoma [14].

Although Muhlmann and colleagues also studied the relationship between Trop2 expression and GC, they used the Lauren classification, which only distinguishes between intestinal-type and diffuse-type cancers [14]. Here, we divided the 600 GC cases into several types according to the latest WHO classification guidelines [36]: tubular, mixed (tubular and mucinous), mucinous, Signet ring cell, and other (papillary adenocarcinoma, adeno-squamous carcinoma, squamous cell carcinoma, undifferentiated carcinoma, and neuroendocrine carcinoma). We found that Trop2 was overexpressed in all GC tissues with the exception of Signet ring cells. However, future studies examining higher numbers of each sample type could help clarify the impact of Trop2 in GC. Additionally, the molecular characteristics and epidemiology of GC vary between eastern and western countries [37–38]. The incidence of different types of GC has also changed over time [39]. Therefore, identifying the molecular characteristics of the various GC types in different populations could potentially increase the efficacy of targeted therapies.

GC is the most prevalent digestive system malignancy in the world, and China has more GC patients than any other country. Moreover, 40%–80% of the population in China is H. pylori-positive, but only a small proportion of infected patients develop GC [40]. Several reports have suggested that H. pylori infection can induce genetic and signaling pathway changes [5]. We found here that H. pylori infection was associated with high Trop2 expression and poor overall survival. It is possible that H. pylori infection may induce Trop2 overexpression, but the mechanism behind this induction needs to be explored in future studies.

Interestingly, our data also show that Trop2 may be more frequently overexpressed in intestinal metaplasia (IM) (80%) than in GC tissues (66.30%). This difference did not reach statistical significance, perhaps due to the small number of IM cases examined (n = 30 vs n = 600 for GC). Gastric mucosa IM lesions can develop into GC (intestinal-type) [41], and chronic gastritis can progress through AG, IM, and dysplasia to eventually result in GC [42]. However, Trop2 expression was elevated in only 29.03% of low-grade and 37.50% of high-grade intra-epithelial neoplasia tissues. Further studies will be necessary to determine the role of Trop2 in the progression from IM to GC. However, our results suggest that high Trop2 expression is related to poor prognosis in GC, and monitoring this biomarker may aid in the treatment of GC.

A total of 830 formalin-fixed, paraffin-embedded (FFPE) stomach tissue samples were collected from 741 patients. This included 600 cancer tissues with 89 matched tumor neighbor tissues, and 32 chronic gastritis, 30 intestinal metaplasia, 31 low-grade intraepithelial neoplasia, and 48 high-grade intraepithelial neoplasia tissues. All tissue blocks were received from the Department of Pathology at the Affiliated Hospital of Nantong University between 2003 and 2010. Medical records for tissue donor patients included information on age, sex, Tumor Node Metastasis (TNM) stage, histological type, differentiation grade, and H. pylori infection. No patients received treatment (radiation therapy, chemotherapy, or immunotherapy) before surgical resection. Overall survival (OS) was defied as the period from initial diagnosis via biopsy to death. Information on patients who were alive at the last follow-up date were deleted from the analysis. Disease-free survival (DFS) was defied as the period from follow-up to recurrence. Forty-one additional freshly frozen gastric cancer and matching tumor neighbor tissues were obtained primarily from the First Affiliated Hospital of Nanjing Medical University. Tissues from Huai’an Second People’s Hospital, Zhangjiagang AoYoung Hospital, and Affiliated Hospital of Nantong University were also included in this study. The study protocol was approved by the Human Research Ethics Committees of these hospitals.

The TMAs were generated in the Department of Pathology, Nantong University Affiliated Hospital, Nantong, Jiangsu, China, using the Tissue Microarrayer System Quick Ray (UT06, UNITMA, Korea) manual. Specifically, core tissue biopsies (2 mm in diameter) were taken from 70 individuals. FFPE blocks were made and then arranged in new recipient paraffin blocks. A total of 13 gastric TMAs were made. Four-micron sections were cut and placed on super frost-charged glass microscope slides to generate TMA slides. Tissue sections were deparaffinized and rehydrated through graded alcohols. Endogenous peroxidase activity was blocked by incubation in 3% H2O2. Tissues were placed in 0.01 M citrate buffer, pH 6.0, and heated in a microwave for antigen retrieval. Trop2 was detected using a polyclonal goat anti-human Trop2 antibody (dilution 1:200) (R & D, AF650). Reactions were detected with an Envision™ peroxidase kit (Dako, Carpinteria, CA, USA). Tissues were then incubated in 3, 3′-diaminobenzidine plus (Dako, Carpinteria, CA, USA), counterstained with Hematoxylin, dehydrated through graded alcohols, cleared in xylene, and coverslipped with permanent mounting media. Staining was quantified in all tissues without knowledge of clinical characteristics. Trop2 expression was scored using the semi-quantitative H-score method, which takes into account both the staining intensity and the percentage of cells at that intensity [43–44]. The following staining intensity scores were used: 0 indicated no staining; 1+ indicated weak staining; 2+ indicated moderate staining; and 3+ indicated intense staining. The total number of cells at each intensity level was multiplied by the corresponding intensity score to yield an intensity percentage score. Final staining scores were then calculated by summing the four intensity percentage scores; the minimum possible final staining score was 0 (no staining), and maximum possible score was 300 (100% of cells with 3+ staining intensity).

qRT-PCR was performed to determine Trop2 mRNA expression levels in 41 pairs of human GC tissue and matched tumor neighbor tissue. Tissue samples were snap-frozen in liquid nitrogen and stored at −80°C before RNA extraction. Total RNA was extracted from frozen samples using Trizol reagent (Invitrogen, Carlsbad, CA, USA) and reverse transcribed into cDNA using a PrimeScript™ RT reagent kit (Takara, Glen Burnie, MD) in accordance with the manufacturer’s instructions. Human β-actin served as the internal control for determining Trop2 mRNA levels. The following primers were used for PCR reactions: human β-actin forward, 5′-TGGAGAAAATCTGGCACCAC-3′, and reverse, 5′-GATGATGCCTCGTTCTAC-3′, and Trop2 forward, 5′-TGTCCTGATGTGATATGTCTGAG-3′, and reverse, 5′-GGGTGAGAGTGGGTTGGG-3′ (Genescript. Nanjing, China). qPT-PCR was performed on an ABI PRISM 7500HT Sequence Detection System (Applied Biosystems, Foster City, CA, USA) in 96-well plates. The final volume for each reaction was 20 μL, which included 2 μL of cDNA template (corresponding to ~40 ng of retro-transcribed total RNA), the primers (20 nmol/L each) and 2 × SYBR Green PCR Master Mixture (10 μL; Applied Biosystems). Cycle conditions were as follows: after an initial 2-minute hold at 50°C to allow AmpErase-UNG activity and 10 min at 95°C, the samples were cycled 40 times at 95°C for 15 seconds and 58°C for 1 minute. All experiments were performed in triplicate. Results were normalized to respective internal controls. The Ct-value for each sample was calculated using the ΔΔCt method [45–48], and results were expressed as 2-ΔΔCt.

All statistical analyses were carried out using the SPSS 18.0 statistical software package (SPSS Inc., Chicago, IL). The two groups were compared using unpaired Student’s t-test. For statistical analysis, the continuous Trop2 expression data from IHC were first converted into dichotic data (low vs high) using specific cutoff values, which were selected based on significant differences in overall survival (OS) using the X-tile software program (The Rimm Lab at Yale University; http://www.tissuearray.org/rimmlab) [35]. Student’s t-test and χ2 test (T < 1 or n < 40, Fisher’s exact test) were used to determine the statistical significance of differences between the groups. Cumulative patient survival was estimated using the Kaplan-Meier method, and a log-rank test was used to compare the survival curves. A Cox proportional hazards model was used to calculate univariate and multivariate hazard ratios for the variables. Values of p less than 0.05 were considered statistically significant.

This work was supported by grants from the National Natural Science Foundation of China (No. 81201596), the Special Fund of Clinical Medicine in Jiangsu Province (No. 2013038) and the Priority Academic Program Development of Jiangsu Higher Education Institutions.

21. Tena-Suck ML, Ortiz-Plata A, Galan F, Sanchez A. Expression of epithelial cell adhesion molecule and pituitary tumor transforming gene in adamantinomatous craniopharyngioma and its correlation with recurrence of the tumor. Ann Diag Path. 2009; 13:82–88.