Background: Tumor deposits (TDs) were reported to be poor prognoses in colorectal carcinoma, but the significance in locally advanced rectal cancer (LARC) (T3-4/N+) following neoadjuvant chemoradiotherapy (neo-CRT) and surgery is unclear. Since adjuvant chemotherapy showed no benefit for LARC following neo-CRT, it is of great value to investigate whether TDs can identify the subgroup of patients who may benefit from adjuvant chemotherapy.

Conclusions: TDs are predictive of poor survival in LARC after neo-CRT. Fortunately, TDs-positive patients appear to benefit from adjuvant chemotherapy.

Although preoperative neoadjuvant chemoradiotherapy (neo-CRT) and total mesorectal excision (TME) significantly reduce the risk of locoregional recurrence and cancer death in locally advanced rectal cancer (LARC) (T3-4/N+) [1-3], about 30% of patients will eventually develop distant metastases [2, 4, 5]. Adjuvant chemotherapy was assumed to prevent distant metastases. Unfortunately, the most recent meta-analysis demonstrated that adjuvant fluorouracil-based chemotherapy does not improve overall survival (OS), disease free survival (DFS) or distant metastasis free survival (DMFS) of LARC following neo-CRT and TME [6]. Certain subgroups of patients are likely to benefit from adjuvant chemotherapy considering the tumor heterogeneity and divergent response to neo-CRT. Thus it is important to identify groups of patients who would benefit from adjuvant treatment after neo-CRT from those who would not.

Previously, several studies [7-10] had reported that tumor deposits were associated with decreased DFS and may identify patients with more aggressive tumors who need aggressive treatment. However, patients recruited in these studies [7-10] did not receive neo-CRT, and tumor deposits were defined and evaluated according to the old criteria which were quite different from the updated standard. The study by Goldstein et al. [9] restricted to patients with T3N+M0 colon adenocarcinomas, which might limit the extensive application of its findings. Moreover, the study by Belt et al. [11] found that tumor deposits defined by the sixth edition criteria increased the risk of developing recurrence in node-negative colorectal cancer patients. Similarly, a recent study [12] also found tumor deposits to be poor prognostic markers among rectal adenocarcinoma patients using the seventh edition criteria. Contradictorily, Song et al. [13] reported that tumor deposits were not prognostic in rectal cancer, and the category N1c in the seventh edition of the AJCC staging system defined by tumor deposits may not be appropriate for patients receiving preoperative neo-CRT. Thus the role of tumor deposits remained controversial in the current treatment mode of neo-CRT followed by TME. More importantly, none of these studies [7-13] investigated the association between tumor deposits and adjuvant chemotherapy.

Therefore, we included 310 LARC patients treated with neo-CRT and TME, to investigate the prognostic effect of tumor deposits and the association with postoperative adjuvant chemotherapy.

This retrospective study was approved by the Institutional Review Board at Sun Yat-sen University Cancer Center, and individual informed consent was waived given the anonymous analysis of routine data. A total of 376 patients undergoing neo-CRT followed by radical surgery at our center between Oct. 2004 and Dec. 2012 were identified. Rectal carcinoma was clinically diagnosed based on abdominal and pelvic computed tomography (CT), magnetic resonance imaging (MRI) and endorectal ultrasound (ERUS). Other examinations such as complete blood cell count, liver function tests and serum carcinoembryonic antigen (CEA) and carbohydrate antigen 19-9 [CA19-9] levels were also conducted. All patients had biopsy-proven rectal carcinoma.

After excluding 21 patients with synchronous distant metastases, another primary malignancy or a prior history of radiotherapy to the pelvis, only 355 patients were eligible. Of these, another 15 resection specimens were missed. In the remaining 340 specimens, 30 specimens were excluded because of the bad stain and quality. Finally, a total of 310 specimens stained with hematoxy-lin and eosin could be used to determine the tumor deposits for the first round by an experienced pathologist (SYX) and the second round by another pathologist (HZZ). They were blinded to the patients’ clinical data and existing pathological outcomes. Tumor deposits were defined and evaluated based on the seventh edition of the AJCC staging manual (Figure 1). Furthermore, tumor regression grading (TRG) classification was evaluated by both pathologists together according to the current AJCC criteria (TRG 0, no residual tumor cells; TRG 1, single cells or small groups of cells; TRG 2, residual cancer with desmoplastic response; and TRG 3, minimal evidence of tumor response). 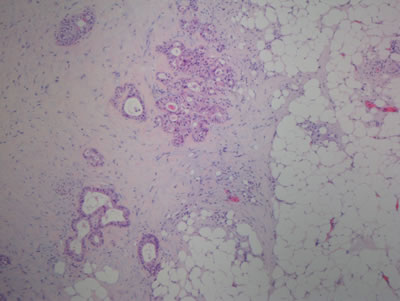 Figure 1: Tumor deposit in rectal adenocarcinoma. Tumor deposits in the perirectal fat or adjacent mesocolic fat, they away from the leading edge of the tumor, there should be no evidence of residual lymph node tissue, and the tumor deposits are within the lymph drainage area of the primary carcinoma. (H and E, 40x)

Radiotherapy was delivered to the whole pelvis at a dose of 46 Gy in 23 fractions, followed by a 4-Gy boost delivered to the primary tumor in 2 fractions for 5 weeks. The radiotherapy technique was based on a three-dimensional conformal radiotherapy treatment planning system (PINNACLE 8) using a 3-field irradiation plan (an 8-MV photon posterior-anterior field and 15-MV photon-opposed lateral beams). The clinical target volume (CTV) included the primary rectal tumor, perirectal tissues, presacral lymph nodes, internal iliac lymph nodes and obturator lymph nodes. For patients with stage T4 cancer or tumors invading the bladder, CTV also included the external iliac lymph drainage area. The superior border of CTV was the bottom of L5, and the inferior border was 2.5-3 cm distal to the tumor. The anterior border was the posterior margin of the bladder or uterus and the posterior border was the anterior margin of the sacrum. The planning target volume (PTV) is defined as the CTV+ 8~10 mm.

Follow up was performed every 3 months for the first 2 years after whole treatment and every 6 months thereafter. Evaluations included complete blood cell count, liver function tests, serum CEA and CA19-9 level tests, physical examination and digital rectal examination at each visit. Chest radiography, abdominal and pelvic CT scanning and colonoscopy were conducted every 6 months after surgery. Positron emission tomography (PET)/CT is not regularly recommended. The last follow up was completed in May 2015.

The primary endpoints were OS and DFS, which were defined as the time from completion of the whole treatment to death from any cause and to the first occurrence of either local or distant progression or of death in the absence of such an event, respectively. The secondary endpoints were DMFS and local recurrence free survival (LRFS). Distant metastasis was identified as any recurrence outside of the pelvic cavity. Local recurrence was defined as any recurrence within the pelvic cavity or perineum.

Association between tumor deposits and pretreatment and postoperative clinicopathological factors

Prognostic effect of tumor deposits in OS and DFS 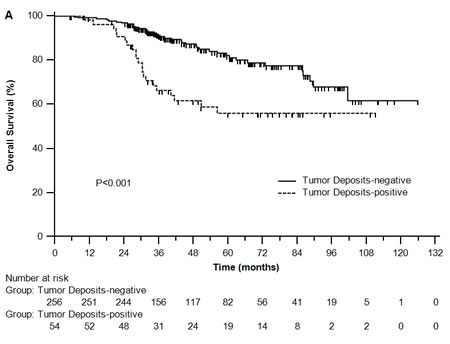 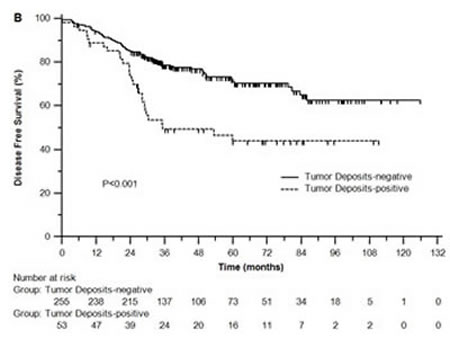 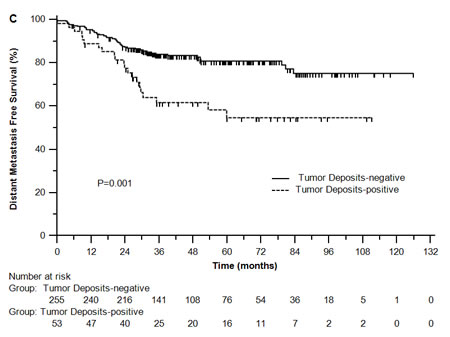 In our study, elevated CEA level, advanced ypT and higher AJCC-TRG were associated with tumor deposits in LARC following neo-CRT and TME. Tumor deposits positive patients had poorer OS, DFS and DMFS. Fortunately, postoperative adjuvant chemotherapy appeared to improve the survival of this subgroup of patients.

It is known that elevated CEA level [14], advanced ypT [15] and higher TRG [16] correlate with large tumor size. Considering that patients with tumor deposits after neo-CRT had a TRG of 2 or 3 (minimal or no response) but no TRG of 0 (no viable cancer cells) [12], thus it was not unusual that tumor deposits positive patients in our study had significantly higher pretreatment CEA level, more advanced ypT and higher TRG than those negative ones.

Consistent with prior studies [7-12], we also found that patients with tumor deposits had poorer OS, DFS and DMFS. Importantly, our study had the largest cohort of 310 patients with neo-CRT, using the latest evaluation and definition criteria of tumor deposits. Inversely, Song et al. [13] reviewed 136 ypT3N0M0 rectal cancer, and indicated that tumor deposits showed no prognostic significance. Obviously, the small sample size of this study may lower the confidence of the findings. Given the poor prognostic significance of tumor deposits, we further investigated the role of adjuvant chemotherapy in the according strata. Interestingly, subgroup analysis showed that in tumor deposits-positive group, adjuvant chemotherapy improved OS and DMFS.

Of note, Rogers et al. [26] indicated that pretreatment intra-tumoral budding in the rectal biopsies predicted a poor pathological response to neo-CRT. But importantly, tumor budding within the entire tumor is termed intra-tumoral budding [27], which was not the same as the peri-tumoral budding after neo-CRT in our study. The finding in that study by Rogers et al. [26] cannot indicate a similarly poor response to adjuvant chemotherapy after surgery for patients with tumor deposits or peri-tumoral budding in resected specimens. Similarly, in the study by Kim et al. [28], tumor budding-positivity was found to be a significant predictor of poor survival in patients receiving non-oxaliplatin-based adjuvant chemotherapy. But the prognostic impact did not remain in multivariate analysis on one hand; on the other hand, this cannot suggest the absence of benefit from adjuvant chemotherapy in tumor budding (deposits) positive patients.

The main limitation of this study is that the two pathologists did not evaluate the resection specimens independently, which may increase the error of evaluating tumor deposits. And the possibility of confounders and issues with missing data are unavoidable due to the retrospective design. But clinicopathologic and survival data were veriﬁed by review of individual patient record. All included patients received standard management of neoadjuvant chemotherapy and TME as recommended.