Gastric cancer (GC) is a leading cause of cancer-related death worldwide [1, 2], and about 90% of non-cardia GCs are the ultimate consequence of longstanding Helicobacter pylori (H. pylori) infection [3–7]. H. pylori is the main trigger of Correa’s multistep gastric carcinogenic cascade [8]. The stepwise changes occurring in the gastric mucosa have been well characterized, starting from longstanding inflammation, which may result in atrophic changes. Gastric mucosal atrophy is the “cancerization field” in which intra-epithelial neoplasia (IEN), and invasive cancer can develop [3, 9, 10].

In a minority of cases, the initiating cause of the mucosal inflammation is not environmental (H. pylori), but host-related (autoimmune gastritis [AIG]) [11, 12]. Autoimmune, corpus-restricted gastritis may result in mucosal atrophy too, and a higher risk of GC has been associated with AIG as well. The epidemiological and clinico-biological profiles of this “alternative” oncogenic pathway are less well defined than those of the H. pylori-related model [9, 13].

Despite recent extensive investigations on the molecular landscape of GC [14], the molecular grounds for the various steps in H. pylori-related carcinogenesis have yet to be fully elucidated, and no consistent and reliable biomarkers have become available for use in GC secondary prevention strategies [9, 15, 16].

Aberrant microRNA (miRNA) expression has consistently been reported in both H. pylori infection and H. pylori-related GC [17–19], but the miRNA dysregulation(s) associated with each of the phenotypic changes sequentially occurring in H. pylori-related carcinogenesis remain elusive. Among other miRNAs, the let-7 family members have reliably been found down-regulated in association with both H. pylori-associated gastritis [20, 21], and gastric cancer [22, 23]. Moreover, a significant down-regulation of let-7c (a let-7 family member) consistently occurs in the natural history of Barrett-adenocarcinoma (which features remarking similarities with H. pylori-related gastric carcinogenesis) [24].

This study focused on the involvement of let-7c over the whole series of non-neoplastic and neoplastic phenotypic changes occurring in H. pylori-infected gastric mucosa. Let-7c expression was profiled by qRT-PCR in a large series of formalin-fixed paraffin-embedded (FFPE) biopsy samples. The results obtained were then confirmed by miRNA in situ hybridization on surgical tissue specimens, and validated by exploring the publicly-available NCBI-GEO and TCGA databases. 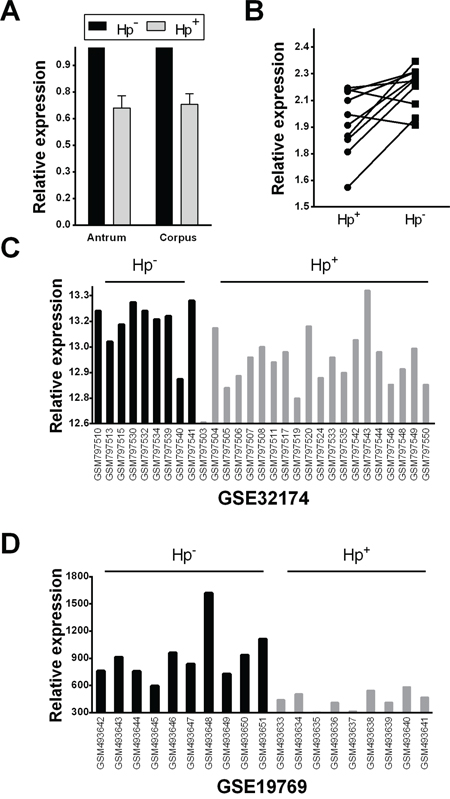 The relationship between H. pylori infection and let-7c expression was further explored in the NCBI-GEO database and using the GEO2R microarray analysis tool. In 2 of the 3 available series, H. pylori-positive samples featured a significant let-7c down-regulation (GSE32174 [31], adjusted p=3.47E-02; and GSE19769 [20], adjusted p=4.3E-04; t-test) (Figure 1C–1D); in the third series, let-7c expression was still lower, though not significantly so, in H. pylori-positive than in normal mucosa (GSE54397 [32]; data not shown). 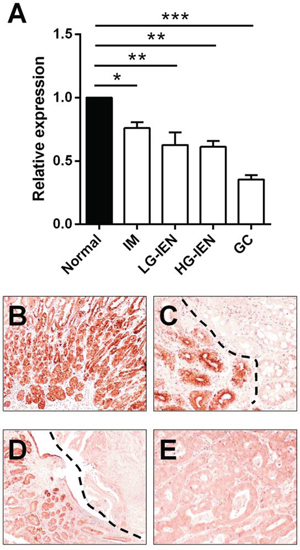 These results were validated by testing let-7c expression (in situ hybridization) on FFPE samples obtained from 5 gastrectomy specimens of intestinal-type GC (Figure 2B–2E). In the multiple tissue samples obtained from each of the surgical specimens considered, strong let-7c hybridization signals were consistently found in native antral mucosecreting epithelia (Figure 2B), while a significant let-7c down-regulation was associated with intestinal metaplasia (Figure 2C), IEN (Figure 2D), and overt adenocarcinoma (Figure 2E).

The above-mentioned results are basically consistent with the profile of let-7c (precursor and mature forms) in The Cancer Genome Atlas (TCGA). As emerged from the Atlas database, the levels of both precursor and mature forms of let-7c were significantly lower in cancer than in normal mucosa among 177 cases of intestinal-type GC, and 41 cases of normal gastric mucosa (both p<0.001; t-test; Figure 3A). Moreover, among the 15 TCGA cases of matched normal and GC samples, cancers featured let-7c down-regulation in its precursor (11/15) and/or mature form (13/15) (p=0.022 and p=0.029, respectively; paired t-test) (Figure 3B). 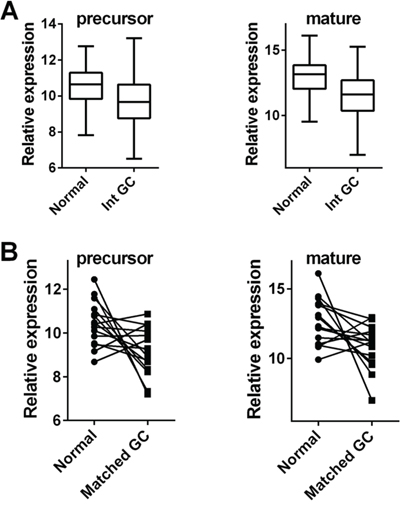 In autoimmune gastritis, let-7c down-regulation is associated with intestinal type, but not pseudo-pyloric type metaplasia

As seen in the H. pylori-related gastritis model, corpus-restricted autoimmune gastritis may also result in the atrophic transformation of the native mucosa, often associated with metaplastic (pseudo-pyloric and intestinal) transformation of the resident specialized epithelia [25]. These lesions are currently considered at higher risk of cancer onset and frequently coexist with enterochromaffin-like (ECL) cell hyperplasia, both linear and micronodular (the precursor lesions of gastric carcinoids).

In this “autoimmune model”, let-7c status was tested to assess its potential involvement in the earliest phases of the morphogenesis involved in atrophic transformation unrelated to H. pylori.

Let-7c expression was assessed by qRT-PCR in 40 FFPE corpus biopsy samples (20 cases of corpus-restricted non-atrophic gastritis, and 20 of intestinal metaplasia) obtained from patients with AIG and no history of H. pylori infection. Compared with normal oxyntic mucosa samples, a significant let-7c down-regulation was consistently associated with both non-atrophic AIG and AIG-related IM (both p<0.001; t-test) (Figure 4A).

Let-7c expression was further tested by in situ hybridization in a series of 15 FFPE samples representative of the histological spectrum of AIG (non-atrophic and atrophic variants). The biopsy samples included 5 cases of normal oxyntic mucosa, 5 of non-atrophic AIG, and 5 of oxyntic atrophic-metaplastic gastritis (including both intestinal and pseudo-pyloric metaplasia; Figure 4B–4E).

Lethal-7 (let-7) is a founding member of the miRNA family of genes that was first identified in Caenorhabditis elegans [26–28]. Several homologs of C. elegans let-7 have been recognized in humans, including hsa-let-7c [27]. Members of the human let-7 family share an identical seed sequence crucial to target recognition. They are distributed in 12 genomic loci known as breakpoint regions and fragile sites that are commonly affected in cancer [29, 30]. Several independent studies have indicated that let-7 members act as tumor suppressors on various tumor types by targeting KRAS and HMGA2 oncogenes [23, 31–35].

As for the present study, we first explored hsa-let-7c expression in the whole spectrum of phenotypic changes occurring in the H. pylori-related carcinogenic cascade. In a large series of representative gastric mucosa biopsy samples, let-7c was found significantly down-regulated in H. pylori-infected mucosa samples (from the antrum and corpus), and its expression was restored after H. pylori eradication.

We demonstrated that let-7c expression drops significantly (qRT-PCR) since the earliest phenotypic changes (Intestinal Metaplasia) occurring in H. pylori-associated carcinogenesis and its loss of expression parallels the increasing severity of the histological changes. The significant miRNA down-regulation featured already in IM samples (ISH) is also consistent with a significant down-regulation of let-7c in serum, as recently reported in a large series of patients with atrophic gastritis (n=222), and GC (n=214) [22]. In line with our results, these data further support the candidacy of let-7c as a promising noninvasive biomarker in GC [22]. Next step will be the evaluation of both tissue and circulating let-7c expression levels in a large series of atrophic gastritis patients stratified according to different gastritis stages [11] to assess let-7c prognostic impact as a noninvasive biomarker in the progression from initial gastritis phases to cancer-prone multifocal gastritis.

We also tested let-7c expression in a model of autoimmune gastritis. In this setting, both non-atrophic and IM-atrophic biopsy samples showed a significant miRNA down-regulation compared with normal oxyntic mucosa (both p<0.001). The significant down-regulation observed on ISH in IM (but not in pseudo-pyloric metaplasia) suggests a role for let-7c in driving the earliest changes occurring in the gastric carcinogenic cascade, while it does not support any elective oncogenic influence of pseudo-pylorized metaplastic cells [25, 36–38].

A recent study [39] pinpointed the significant role of HMGA2, a let-7c target, in the progression and prognosis of GC through the activation of the epithelial-mesenchymal transition process in GC cells. These data and the present results (i.e., let-7c expression decreased significantly with the increasing severity of the lesions considered) support an important role of let-7c in both the initiation and progression of the gastric neoplastic transformation.

In conclusion, our findings in a large series of histologically well-profiled phenotypic lesions demonstrate that let-7c down-regulation plays a pathogenic part right from the earliest phenotypic changes taking place in the H. pylori-related carcinogenic process, and further supports the tumor suppressor activity of this miRNA family. The reversibility of let-7c down-regulation, as seen after H. pylori eradication, also testifies to a “functional plasticity” of this potential candidate for use as an adjunctive test on gastric mucosa status. We also demonstrated for the first time that let-7c is significantly down-regulated even in early cancer precursor lesions occurring in autoimmune gastric oncogenesis. Overall, these results provide a solid rationale for further exploring the diagnostic reliability of this miRNA family as a novel biomarker for use in GC secondary prevention strategies.

Investigation has been conducted in accordance with the ethical standards and according to the Declaration of Helsinki and according to national and international guidelines and has been approved by the authors’ institutional review board (#0012272/15).

The cases considered in this study were retrospectively collected from the files of the Surgical Pathology and Cytopathology Unit of the Department of Medicine (DIMED - University of Padua). The Institute’s ethical regulations concerning research conducted on human tissues were followed.

A total of 195 endoscopic formalin-fixed paraffin-embedded (FFPE) biopsy samples were considered in the let-7c qRT-PCR analysis. The tissue samples were selected from 140 different biopsy sets obtained from 130 Caucasian patients (M/F: 1.5/1; mean age 63.2±8.4 years) who underwent gastro-esophageal endoscopy at the Gastroenterology Unit of the Department of Surgical Oncology and Gastroenterology (DiSCOG, University of Padua).

In situ hybridization (ISH) was performed on FFPE tissue samples obtained from 5 gastrectomy specimens for adenocarcinoma (all distal cancers associated with ongoing or previous H. pylori infection); and 10 biopsy samples of oxyntic mucosa obtained from AIG patients were also included. Where indicated, tissue samples were micro-dissected from the formalin-fixed paraffin-embedded tissues so that the tested tissue samples always included at least 70% of the target lesion (as further validated on serial H&E histology sections). All histological assessments were performed jointly by three pathologists (MF, DS, IC).

The NCBI-GEO repository of published array data and the GEO2R microarray analysis tool were used (15 June 2015) to assess let-7c expression in H. pylori-related gastritis (using the keywords: microRNA, gastritis, Helicobacter pylori, Homo sapiens, gastric). The GEO2R algorithms were used for the statistical analysis on the differences in let-7c expression between the groups (normal gastric mucosa vs Hp-gastritis).

All authors took part in writing the manuscript and approved the final, submitted version. We would like to thank Dr. Roberta Salmaso for her technical assistance.

This work was partly supported by a grant from the Italian Association for Cancer Research (AIRC Regional grant 2008 N. 6421).