Cervical lymph node metastasis is an important prognostic factor in oral squamous cell carcinoma (OSCC), but its accurate assessment after sentinel node biopsy or neck dissection is often limited to the histopathological examination of only one or two sections. Previous our study showed the usefulness of the reverse transcription loop-mediated isothermal amplification (RT-LAMP) targeting keratin 19 (KRT19) mRNA for the genetic detection of lymph node metastasis, but the sensitivity was insufficient. Here, we have attempted to identify novel molecular markers for OSCC cells in lymph nodes. We performed microarray analysis to identify genes overexpressed in 7 metastatic lymph nodes from OSCC patients, compared to 1 normal lymph node and 5 salivary glands from non-cancer patients. We then used real-time quantitative RT-PCR (qRT-PCR) and RT-LAMP to compare the expression of these genes in newly resected metastatic and normal lymph nodes. Of 4 genes identified by microarray analysis, annexin A8 (ANXA8) and desmoglein 3 mRNA were detected by qRT-PCR in metastatic lymph nodes but not in normal lymph nodes. Furthermore, ANXA8 mRNA expression was detected in all KRT19-negative metastatic lymph nodes. Both KRT19 and ANXA8 mRNA may be useful markers for detecting lymph node metastases in OSCC patients.

An estimated 263,900 new cases and 128,000 deaths from oral cavity cancer occurred in 2008 worldwide [1]. The prognosis for oral squamous cell carcinoma (OSCC) patients is determined by multiple factors including primary tumor size (T), the presence of lymph node (N) and distant (M) metastases, and histopathological grade [2, 3]. Of these, N is of paramount importance [4-6], so it is important to precisely diagnose the metastatic status of lymph nodes. Ultrasound (US), computed tomography (CT), magnetic resonance imaging (MRI), and positron emission tomography (PET)-CT have all been used to detect cervical lymph node metastasis. Individually, the sensitivity of these methods is approximately 70-80% [7, 8], while in combination this improves to 86.5% [8]. However, micrometastases less than 2 mm in diameter are difficult to detect by these imaging techniques, so when we diagnose OSCC patients as clinically N0 (cN0), we may be failing to detect micrometastasis in lymph nodes. Elective neck dissection for OSCC patients with cN0 is a standard [9], but may be over-treatment in approximately 80% of these patients [10]. Introducing sentinel node biopsy (SNB) in cN0 patients could both avoid unnecessary neck dissections and be more financially economical [11, 12], but the limitation to diagnosis then becomes our ability to histopathologically detect micrometastases. Currently this depends upon the examination of the largest surface area on one or two sections of the resected sentinel lymph nodes and to detect micrometastases in only a few slides is often difficult. Thus, a method based on molecular biology that uses whole lymph nodes may provide a more accurate diagnosis than conventional histopathology.

Recently, we have used an automated system that rapidly quantifies keratin 19 (KRT19) mRNA using the reverse transcription loop-mediated isothermal amplification (RT-LAMP) method to examine sentinel lymph nodes from OSCC patients assessed as cN0. This method is superior to PCR in its simplicity, rapidity, specificity, and cost-effectiveness [13]. At present, the RT-LAMP for KRT19 is used clinically for SNB in breast, colon, and gastric cancer patients [14-16]. In a previous study, we showed that the sensitivity and specificity of this assay in OSCC patients were 86.9% and 97.2%, respectively [17]. The sensitivity of the RT-LAMP for KRT19 in OSCC patients was lower than has been reported in other cancers. This difference in sensitivity may be due to differences in the relative expression levels of KRT19 in different cancers. In several primary OSCC tumors and associated metastatic lymph nodes, KRT19 mRNA and protein were expressed at extremely low levels [17]. The sensitivity of the RT-LAMP could be improved by using multiple markers. Therefore, here we attempted to identify more efficient molecular markers for detecting lymph node metastasis in OSCC patients.

Using microarray analysis, we compared the gene expression profiles in 7 metastatic lymph nodes from OSCC patients and 1 cervical lymph node from a non-cancer patient. We also analyzed 5 salivary glands, because heterotopic salivary gland tissue may also be present in cervical lymph nodes [18]. We evaluated gene expression in terms of signal to noise ratios, with a ratio under 3 taken as negative expression and a ratio over 3 taken as positive expression. We identified 11,062 genes which were not expressed in any of the salivary glands tested. Amongst these genes, we found 4 that were overexpressed in all metastatic lymph nodes by more than 50 times compared to the normal lymph node (Figure 1A, 1B). These genes were keratin 6C (KRT6C), small proline-rich protein 1B (SPRR1B), annexin A8 (ANXA8), and desmoglein 3 (DSG3). 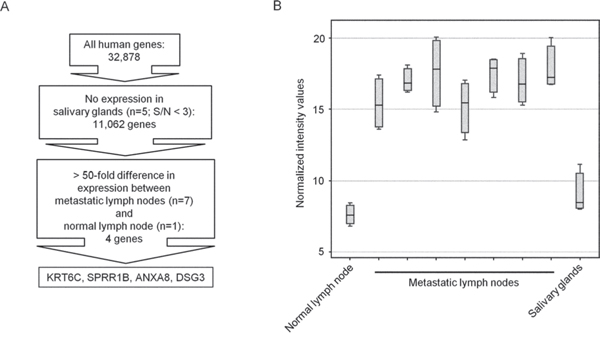 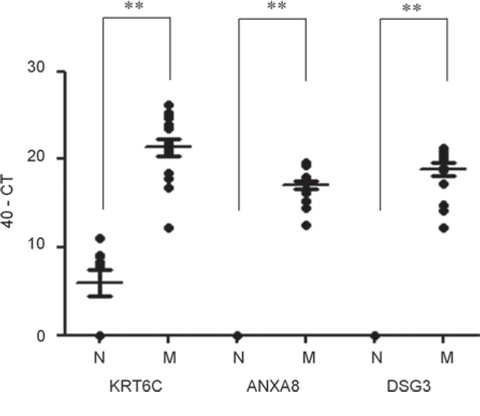 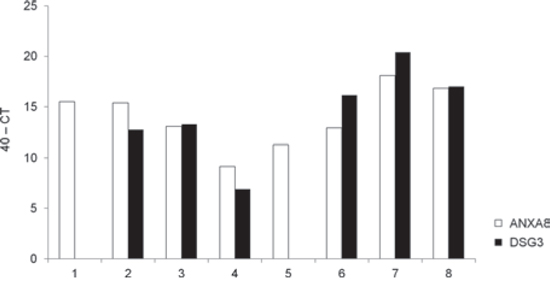 We investigated detection rates using a single marker (KRT19 or ANXA8) or double markers (KRT19 and ANXA8), using RT-LAMP to detect KRT19 mRNA and qRT-PCR to detect ANXA8 mRNA. Among 58 lymph nodes classified histopathologically as metastasis-positive, KRT19 mRNA was detected in 86.2% (50/58) and ANXA8 mRNA was detected in 87.9% (51/58). When we used both markers (KRT19 and ANXA8), we were able to detect expression in all metastatic lymph nodes (Table 1). We also tested 253 lymph nodes classified histopathologically as metastasis-negative and found that the qRT-PCR assay detected ANXA8 mRNA expression in approximately 3% of the samples (Table 1).

Table 1: Detection rate of KRT19 mRNA by RT-LAMP and ANXA8 mRNA by qRT-PCR in lymph nodes classified as positive or negative for metastases histopathologically, using single or double markers

Detection of ANXA8 expression by RT-LAMP 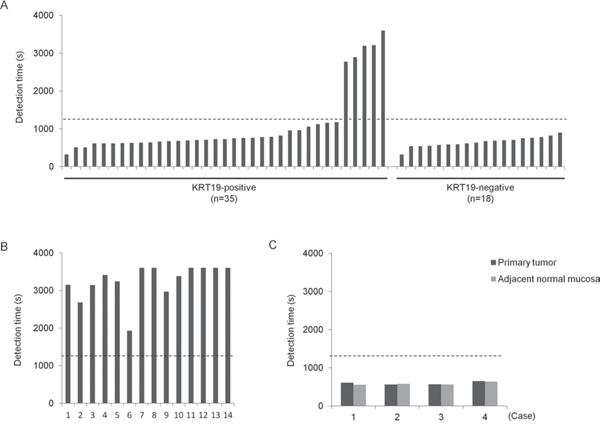 Table 2: Detection rate of KRT19 and ANXA8 mRNA by RT-LAMP in lymph nodes classified as positive or negative for metastases histopathologically, using single or double markers

In this study, we have identified ANXA8 and DSG3 as candidate molecular markers for molecular biology-based assays to detect metastases in whole lymph nodes from OSCC patients. DSG3 is also known as pemphigus vulgaris antigen (PVA) and is the calcium-binding, transmembrane glycoprotein component of desmosomes in vertebrate epithelial cells. DSG3 has been reported to be overexpressed in head and neck cancers and this has been correlated with lymph node metastasis and cell proliferation [19, 20]. Furthermore, several reports have already shown that DSG3 is a useful marker for detecting lymph node metastasis in these patients [21-23]. On the other hand, ANXA8 has been reported to be frequently highly overexpressed in pancreatic cancer [24], but little is known about its function and significance in other human cancers, including OSCC. Here, we present the first evidence that ANXA8 mRNA is commonly overexpressed in metastatic lymph nodes from OSCC patients.

Histopathological examination of serial sections and immunohistochemistry are useful for detecting metastases including micrometastases in the lymph nodes [25], but it is an expensive and challenging procedure for pathologists. We have therefore been using the RT-LAMP assay targeting KRT19 for SNB in OSCC, because this molecular biology-based test is easy, quick, and precise. However, we have seen several false negative cases due to low or no expression of KRT19 in primary OSCC tumors [17]. In this study, quite a few KRT19-negative metastatic lymph nodes were also observed, whereas we were able to detect ANXA8 mRNA in all those by qRT-PCR and RT-LAMP. Furthermore, ANXA8 mRNA was detected in a few lymph nodes in which metastases had not been identified histopathologically. These discordant results were due to tissue allocation bias. This suggests that molecular biology techniques may provide better diagnostic approaches than routine histopathological examination. These techniques could also be useful for detecting metastases in resected lymph nodes from neck dissections, when the number of metastatic lymph nodes in OSCC patients is used as an indication of the need for postoperative adjuvant therapy. However, the extracapsular spread as another indication of adjuvant therapy cannot be evaluated by these methods.

In summary, we have identified ANXA8 as a novel marker for detecting lymph node metastases in OSCC and have developed a molecular biology-based test using two markers, KRT19 and ANXA8 mRNAs. The accuracy, rapidity, and convenience of this system are superior to conventional histopathological examination, and should enhance our ability to precisely stage OSCC, with respect to “N” in the TNM status, and so improve the prognosis and quality of life of these patients.

All patients in this study were seen at the Ehime University Hospital between February 2007 and March 2011. The Ehime University Hospital Review Board approved the study and appropriate written informed consent was obtained from each patient. In the microarray analysis, we examined 7 metastatic lymph nodes from OSCC patients, 1 normal lymph node from a patient with ameloblastoma, and 5 salivary glands from patients with benign salivary gland diseases. In the qRT-PCR analysis, we examined 23 metastatic lymph nodes from OSCC patients and 9 normal lymph nodes from patients undergoing surgery for benign oral disorders. In the RT-LAMP assay, 392 lymph nodes resected by SNB or neck dissection from 103 patients with OSCC, 14 normal lymph nodes from 9 non-cancer patients, and 4 primary OSCC tissues were used. Each lymph node was rinsed quickly in saline solution to remove attached blood, and then divided into three portions. A central portion was examined through sectioning of the maximal cut surface of the specimen, stained with hematoxylin and eosin (H&E), and diagnosed as metastasis or non-metastasis. Remaining both sides were used for total RNA extraction.

The student’s t-test was used to analyze the distribution of CT values according to histological examination. The significance level was set at p < 0.05 for each analysis.