Chronic obstructive pulmonary disease (COPD) is the 3rd most common cause of death in the US [1] and is highly associated with an increased risk of lung cancer [2, 3]. After controlling for smoking history, patients with COPD have up to 6-fold increase in lung cancer incidence compared to smokers without COPD [4]. However, the mechanisms linking chronic airway inflammation and lung tumorigenesis remain unclear.

Current evidence suggests a role for NF-κB in COPD and lung cancer. Enhanced activation of canonical NF-ĸB signaling has been detected in airway epithelium of COPD patients [5] and in areas of dysplasia and premalignant lesions in biopsies from patients at risk for cancer [6]. In mice, activation of the NF-κB pathway has been detected during K-ras oncogene-driven lung adenocarcinoma [7, 8]. We have previously demonstrated that inhibition of NF-κB signaling in the airway epithelium significantly reduces formation of lung tumors [9]. In contrast, activation of NF-κB in the lungs markedly increases tumor formation [10], supporting the concept that activation of canonical NF-κB pathway plays an important role in lung carcinogenesis.

In these studies, we investigated whether NF-κB-dependent chronic inflammation could drive development of both COPD and lung tumors. We used a transgenic mouse model that conditionally expresses activated IκB kinase β (IKKβ) in airway epithelium (IKTA mice) [11]. We found that sustained activation of the NF-κB pathway in IKTA mice increases infiltration of lungs with M2-polarized macrophages and lymphocytes and results in both emphysema and small airway remodeling. With long-term transgene activation, NF-κB-mediated chronic airway inflammation supports development of spontaneous lung tumors. In additional studies, we found that alveolar macrophages are essential for increased lung tumorigenesis following treatment with the carcinogen urethane. In the context of NF-κB-driven chronic airway inflammation, macrophages support carcinogenesis through TGFβ/IL-10/retinoic acid-dependent mechanisms that enhance generation of immunosuppressive regulatory T cells (Tregs).

To investigate the effects of long-term NF-κB-mediated inflammation in the lungs, we first treated IKTA mice and WT littermate controls with doxycycline (dox, 0.1g/L in drinking water) for 4 months. Dox-treated IKTA mice developed diffuse emphysematous enlargement of distal airspaces compared to dox-treated WT controls, which was evident by histologic evaluation (Figure 1A) and morphometric determination of alveolar septal perimeter length and alveolar diameter (Figure 1B and 1D). In comparison, no differences were detected in alveolar size/appearance in WT and IKTA mice that were not treated with dox (data not shown). As opposed to the linear appearance of elastin fibers in the alveolar compartment of WT mice, the elastin network in dox-treated IKTA mice appeared disorganized and clumped at the tips of alveolar ducts and loose/unraveled in inter-alveolar walls (Figure 1C), as has been documented in human emphysema [12]. In addition to emphysema, fibrotic thickening of the walls of small airways is one of the central features of COPD [3]. Therefore, we analyzed airway wall thickness (subepithelial connective tissue volume density, VVsub) in small airways from the lungs of dox-treated WT and IKTA mice. This morphometric analysis showed a marked increase in airway wall thickness in dox-treated IKTA mice at 4 months (Figures 1E and 1F). In addition, we found significantly increased numbers of macrophages, lymphocytes, and neutrophils in bronchoalveolar lavage (BAL) (Figure 1G). To determine the phenotype of lung macrophages in IKTA mice at this time point, we immunostained lung sections from WT and IKTA mice with anti-arginase-1 and anti-CD68 antibodies to detect M2-polarized macrophages. As shown in Figure 1H, we observed a marked increase in arginase-1+/CD68+ macrophages in the lungs of IKTA mice compared with controls. 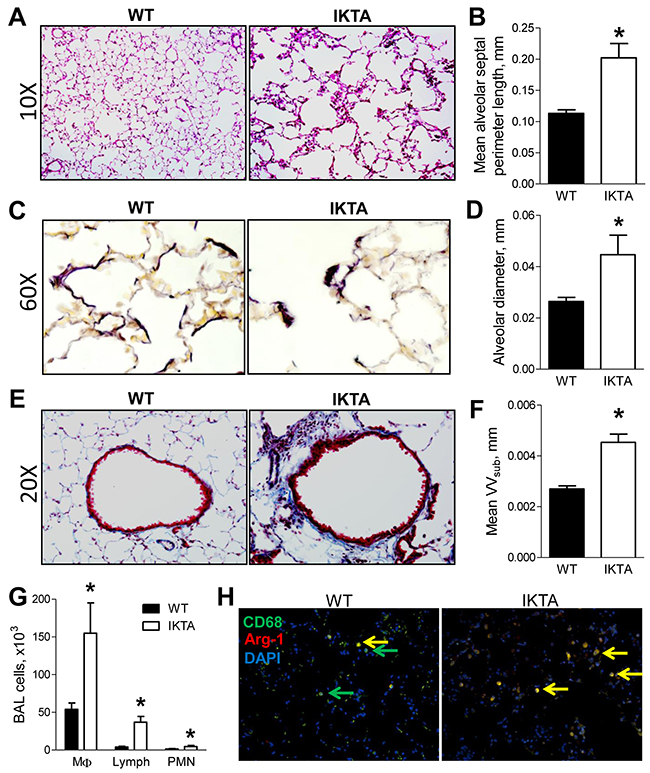 To further investigate the consequences of long-term NF-κB activation in the lungs, we treated IKTA mice and WT littermate controls with continuous dox for 11 months. In addition to substantial COPD-like lung remodeling, 7/12 IKTA mice developed spontaneous lung tumors that had the appearance of large, solid adenomas. In contrast, only 1/23 WT control mice developed a single small lung tumor (Figure 2A–2D). As expected, IKTA mice had increased numbers of macrophages and lymphocytes in bronchoalveolar lavage (Figure 2E). We also observed a marked increase in arginase-1+/CD68+ macrophages in the lungs of IKTA mice compared with controls (Figure 2F–2G). These findings indicate that sustained NF-κB activation in airway epithelium results in COPD-like pathology followed by induction of lung tumorigenesis, illustrating a mechanistic link between COPD and lung cancer via the NF-κB pathway. 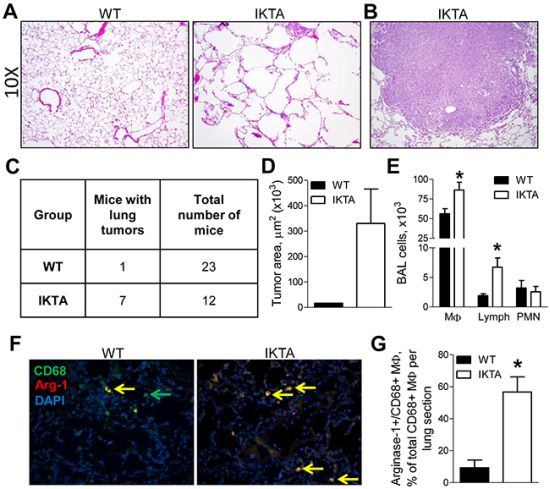 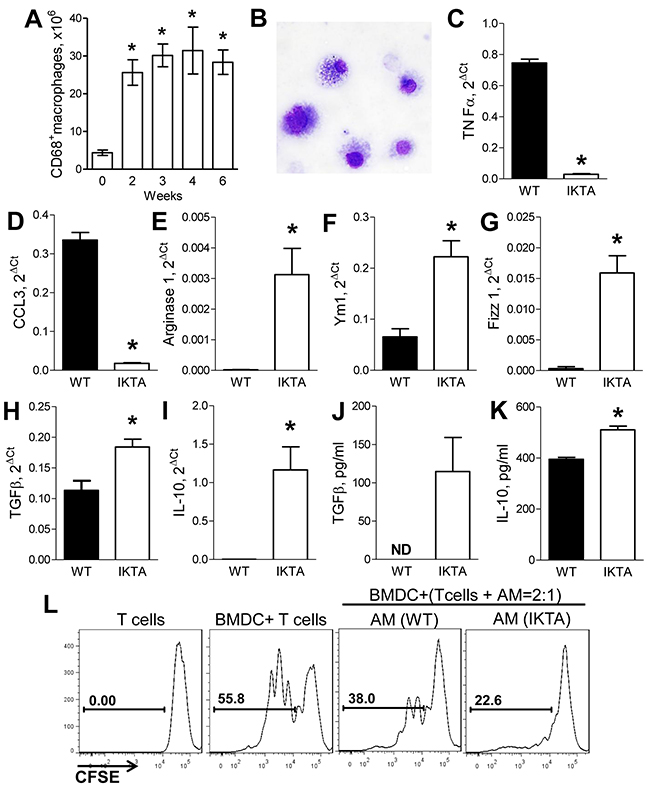 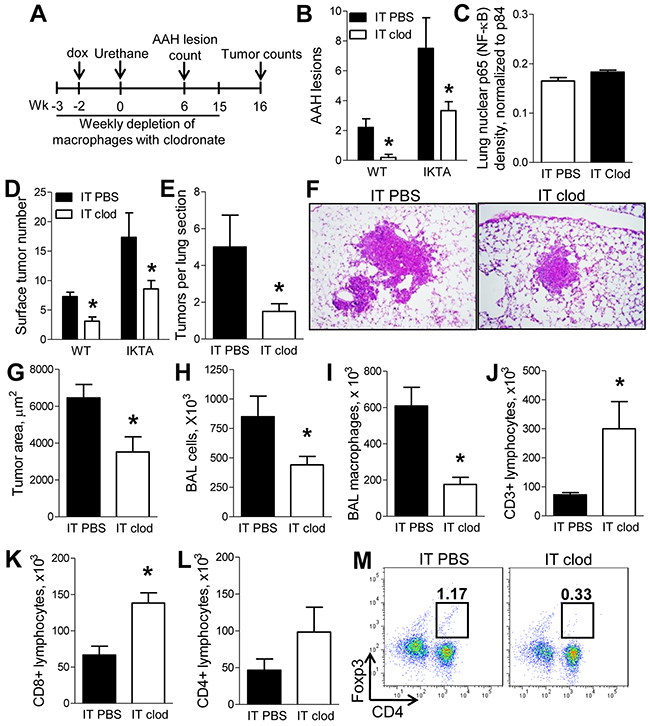 To prove that alveolar macrophages contribute to increased infiltration of the lungs with Tregs in the setting of NF-κB-generated chronic inflammation, we treated IKTA mice with dox and IT injections of liposomal clodronate on days -3, 0, 7, and 14 relative to dox treatment to deplete alveolar macrophages (Figure 5A). Dox-treated IKTA mice injected with control (PBS) liposomes or naïve IKTA mice (no dox or liposome injections) were used as controls. Analysis of lung Tregs was conducted at day 21 (week 3) using flow cytometry. As expected, activation of airway NF-κB signaling markedly increased Tregs in the lungs of IKTA mice treated with control (PBS) liposomes; however, Tregs were significantly reduced after depletion of alveolar macrophages with clodronate liposomes (Figure 5B). 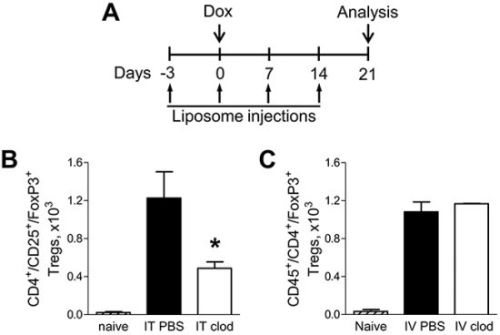 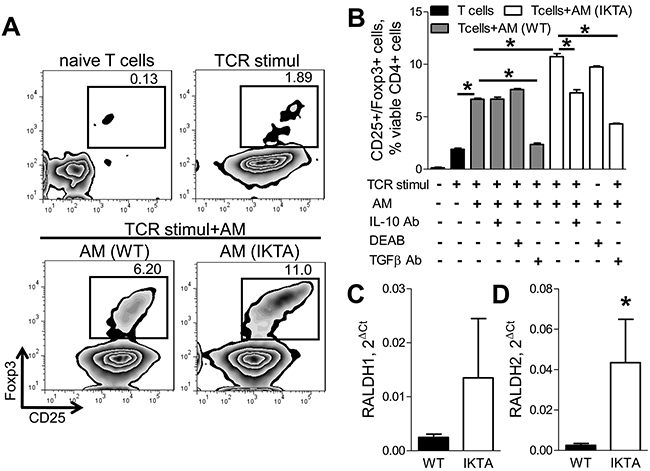 While pro-inflammatory pathway activation is normally terminated after elimination of triggering stimuli, unresolved inflammation can lead to development of chronic inflammatory diseases, including COPD. In the current study, we demonstrate that sustained activation of NF-κB signaling links COPD-like pathology and lung cancer. We found that persistent activation of NF-κB signaling in airway epithelium results in chronic airway inflammation, small airway remodeling, and diffuse lung emphysema, similar to patients with COPD. We also found that NF-κB-driven chronic airway inflammation results in accumulation of M2-polarized macrophages, which support lung tumorigenesis by differentiating Tregs and down-regulating of anti-tumor CD8+ T lymphocytes. In addition, we demonstrated that elevated expression of TGFβ and IL-10 by alveolar macrophages contributes to the development and maintenance of an immunosuppressive microenvironment in the lungs despite the presence of chronic airway inflammation.

In COPD, activation of the NF-κB pathway has been detected in the bronchial epithelium and macrophages [5, 21]. In animal studies, activation of NF-κB signaling has been implicated in COPD-like inflammation and pathology induced by Nontypeable Haemophilus influenzae (NTHi) [22] and tobacco smoke [23]. Here, we demonstrated that sustained activation of the NF-κB pathway in airway epithelium causes chronic airway inflammation with increased infiltration of lungs with macrophages, lymphocytes, and neutrophils, along with fibrotic thickening of small airway walls and profound emphysema, strongly supporting a role for NF-κB signaling in COPD. Although additional work will be required to determine the proximate cause of emphysematous destruction in our model, alveolar macrophages do not appear to be critical since macrophage depletion did not substantially ameliorate this phenotype.

These are the first studies to show that NF-κB-induced chronic inflammation is sufficient to support tumorigenesis. Previously, NF-κB activation has been identified in premalignant lesions in humans and lung tumors in humans and mice [6–8, 24]. We showed that expression of a dominant NF-κB inhibitor in airway epithelium markedly reduced lung tumorigenesis in mice [9], while over-expression of an NF-κB activator in IKTA mice enhanced carcinogen-induced lung tumors and was able to function as a tumor promoter in the presence of an initiating agent (mutagen) [10]. These studies add to existing knowledge by showing that NF-κB activation can underlie both COPD-like lung remodeling and lung cancer and by demonstrating the oncogenic potential of persistent NF-κB-generated inflammation.

Alveolar macrophages appear to be critical players in promotion of lung tumors during chronic airway inflammation through regulation of the immune microenvironment. Our studies indicate that during chronic airway inflammation, alveolar macrophages are predominantly M2-polarized and appear to support tumorigenesis at least in part through generation of regulatory T cells. Elevated numbers of Tregs have been detected in lungs of patients with COPD [25]; however, the role of Tregs in COPD progression remains uncertain. In lung cancer, accumulation of Tregs correlates with poor clinical outcome [26]. Our findings are consistent with our previous demonstration that depletion of Tregs restores CD8+ T cell-mediated anti-tumor immune response and reduces lung carcinogenesis in IKTA mice [10]. Thus, during chronic airway inflammation, alveolar macrophages can promote lung tumorigenesis through generation of immunosuppressive Tregs.

After investigating the mechanisms by which alveolar macrophages regulate Treg generation, we found elevated expression of TGFβ by alveolar macrophages exposed to chronic inflammatory stimuli. Blocking TGFβ signaling with antibodies reduced the numbers of Tregs, consistent with prior reports that TGFβ regulates expression of Foxp3 [17]. We also observed a reduction in Tregs after targeting IL-10 or retinoic acids; however, this reduction was less pronounced compared to targeting TGFβ. Therefore, we suggest that during chronic inflammation, TGFβ, IL-10, and retinoic acids may function together to maintain an immunosuppressive, tumor-promoting microenvironment. Our findings are consistent with a report by Murai and colleagues showing that secretion of IL-10 by myeloid cells helps maintain Foxp3+ Tregs in a model of colitis [18].

While retinoic acids have been shown to support expression of Foxp3 in Tregs [19], blocking of retinoic acid production produced modest effects in our model. We speculate that retinoic acids could be more important for stability of Foxp3 expression in inducible Tregs, rather than for induction of Foxp3 expression per se. Despite reports of anti-tumor properties of vitamin A in lung cancer [27], more recent studies demonstrated that activation of retinoic acid receptors correlates with worse prognosis for NSCLC, and supplementation with vitamin A increases the risk of lung cancer in smokers [28, 29]. Our findings demonstrate that retinoic acids may contribute to maintenance of a Treg-mediated immunosuppressive microenvironment during chronic airway inflammation, which could help explain the adverse effects of supplementation of vitamin A on lung cancer.

Despite progress in understanding the biology of COPD and lung cancer, the mechanism by which inflammation regulates tumor formation remains poorly defined. In these studies, we demonstrated that chronic NF-κB-driven airway inflammation promotes epithelial malignancies through alternative activation of alveolar macrophages, resulting in TGFβ/IL-10/retinoic acid-dependent generation and maintenance of Foxp3+ Tregs. Potentially, these molecules and pathways could be targeted to reduce the excessive lung cancer risk in individuals with chronic lung inflammation related to COPD.

IKTA mice (IKKβ Trans-Activated) selectively expressing a constitutively active form of human IKKβ in airway epithelium has been reported previously [11]. We used sex-matched IKTA mice and WT littermate controls (weighing 20-25 grams) on the original FVB background. To activate transgene expression, mice were provided with 0.1 g/L doxycycline (dox) in drinking water. To induce tumors, urethane was given by a single IP injection (1 g/kg). At the time of sacrifice, lungs were lavaged, perfused, fixed in ice cold Bouin’s fixative solution (Sigma-Aldrich) for 24 hours, used for surface tumor number and diameter measurements under a dissecting microscope by at least two experienced readers, blinded to sample identifiers and embedded in paraffin. All mouse experiments were approved by the Vanderbilt University Institutional Animal Care and Utilization Committee.

BAL fluid was collected by flushing the lungs 3X with 1 ml of serile PBS. Total and differential BAL cell counting was performed as previously described [9].

Depletion of macrophages with clodronate

Total TGFβ and IL-10 were measured in cell-free BAL fluid or whole lung homogenates using a specific ELISA (from R&D Systems and Biolegend respectively) according to manufacturer’s instructions.

Co-culture of T cells with macrophages

The authors have no conflicting financial interests.

5. Isajevs S, Taivans I, Svirina D, Strazda G, Kopeika U. Patterns of inflammatory responses in large and small airways in smokers with and without chronic obstructive pulmonary disease. Respiration 2011; 81: 362–371.