Approximately 7.5% of all colorectal cancers are considered to originate from the alternative, serrated route. Here, we investigate the expression of the c-MYC oncogene and the SIRT1 protein deacetylase by immunohistochemical staining in subgroups of colorectal serrated lesions that were characterized by different molecular alterations. The expression of c-MYC and SIRT1 correlated with the presence of KRAS and BRAF mutations and high expression of c-MYC and SIRT1 was strongly associated with higher grades of malignancy. In contrast, in the majority of serrated lesions without KRAS or BRAF mutations, c-MYC and SIRT1 expression was not found increased. In this group only a subset of mostly high grade intraepithelial neoplasia and carcinoma was characterized by elevated c-MYC and SIRT1 expression. This was associated with nuclear localization of beta-catenin, indicating that Wnt pathway activation may confer transcriptional induction of c-MYC. In summary, we established a link between oncogenic K-Ras and B-Raf, suggesting post-transcriptional regulation of c-MYC through MAPK/ERK1/2 pathway activation, as well as for Wnt signalling to the activation of the c-MYC oncogene, and consequently of SIRT1 in the serrated route. The increasing expressions with higher grades of malignancy suggest crucial functions for c-MYC and SIRT1 in the progression of serrated lesions to colorectal cancer. These functions may include antagonizing of apoptosis and senescence, which are characteristic features of serrated lesions.

Colorectal cancer is the third most common cancer in the world and is one of the leading causes of cancer-related deaths [1]. Malignant transformation in the classical adenoma – carcinoma sequence is crucially associated with the activation of the Wnt/beta-catenin signaling pathway which leads to the transcriptional induction of the c-MYC oncogene [2].

Besides the classical adenoma – carcinoma sequence, strong evidence for an alternative serrated pathway in the development of colorectal cancer has emerged in recent years [3, 4]. The serrated pathway includes lesions with “saw-tooth” crypt morphology like hyperplastic polyps, sessile serrated adenoma, traditional serrated adenoma and invasive serrated adenocarcinoma [3]. In contrast to the classical adenoma–carcinoma sequence, deregulation of the Wnt/beta-catenin pathway is rarely observed, whereas mutations of BRAF, and less frequently KRAS have been shown to be the initiating events in the serrated route to colorectal cancer [5-8]. Lesions with BRAF mutations are frequently located in the right colon and are strongly associated with MSI and DNA methylation abnormalities, whereas lesions initiating with KRAS mutations predominantly arise in the left colon and are characterized by microsatellite stability (MSS) or microsatellite instability low (MSI-L) [4, 9, 10]. Besides lesions with mutant KRAS or BRAF, a third subset exists which does not display any known aberrant oncogene activation.

We have shown previously that c-MYC activates the SIRT1 enzyme which critically contributes to suppression of senescence and inhibition of c-MYC-induced apoptosis [11]. The NAD+ dependent SIRT1 protein deacetylase inhibits various pro-apoptotic factors, including p53 and is necessary for cancer cell, and as recently shown, for cancer stem cell survival [12]. SIRT1 has therefore been suggested to exert tumor promoting functions in human cancers ([13-17], reviewed in [16, 18]). In colorectal cancer of the classical route SIRT1 is overexpressed [11, 19], which correlates with high c-MYC expression [11].

Table 1: Distribution of location and mutational status of serrated lesions, and age of patients

In normal mucosa a moderate c-MYC expression was restricted to the proliferative zone in the basal third of the crypts (Figure 1a, c). Some of these cells were also positive for SIRT1 (Figure 1b, d). In hyperplastic polyps and sessile serrated adenomas without intraepithelial neoplasia c-MYC expression was mainly localized to one or two thirds of the base of the crypts, corresponding to a low or moderate expression in the majority of cases (51 of 54 cases (94%)) (table 2). SIRT1 was either detected in some scattered cells in the proliferative zone or restricted also to the basal third or two thirds of the crypts (51of 54 cases (95%) (table 2). Irrespective of the molecular alteration and histologic subtype, lesions with low grade intraepithelial neoplasia revealed a moderate to high expression of both, c-MYC (23 of 25 cases (93%)) and of SIRT1 (17 of 25 cases (68%), table 2). Most lesions with high grade intraepithelial neoplasia and invasive carcinomas were characterized by high c-MYC and SIRT1 expression (c-MYC: 76% and 72%; respectively, SIRT1: 64% (both groups), table 2). Taken together, a higher tumor grade was accompanied by a correlating, increasing expression of c-MYC and SIRT1 irrespective of the histologic subtype and side of localization. 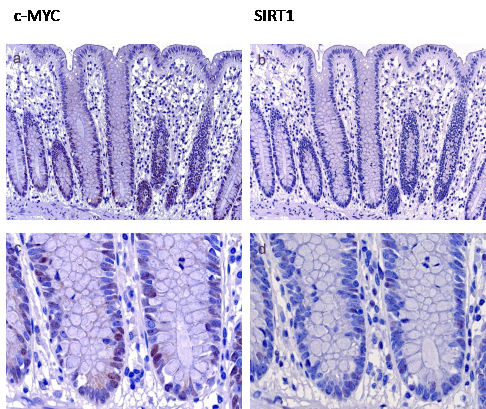 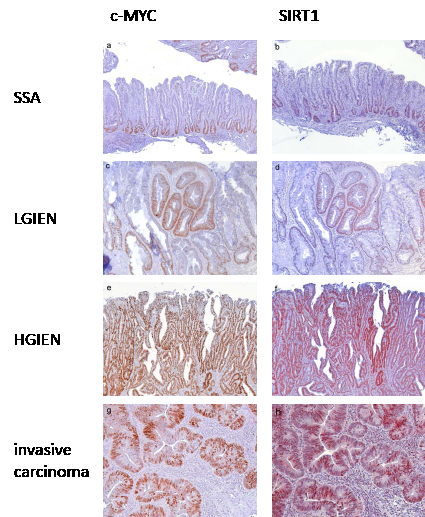 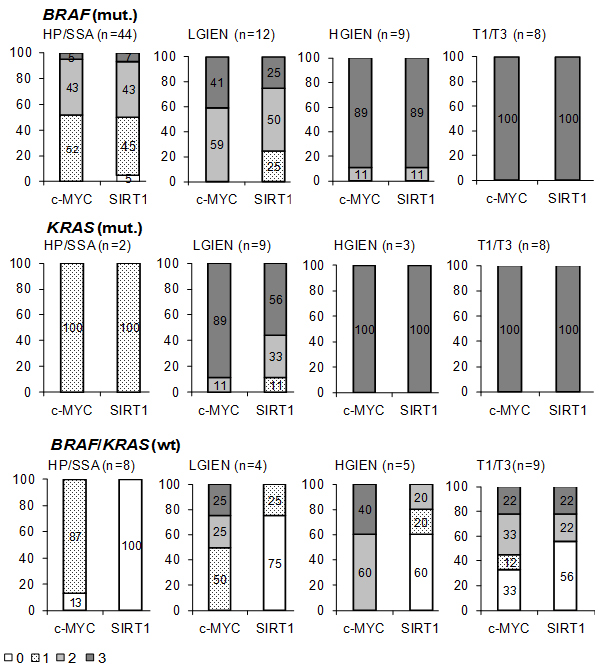 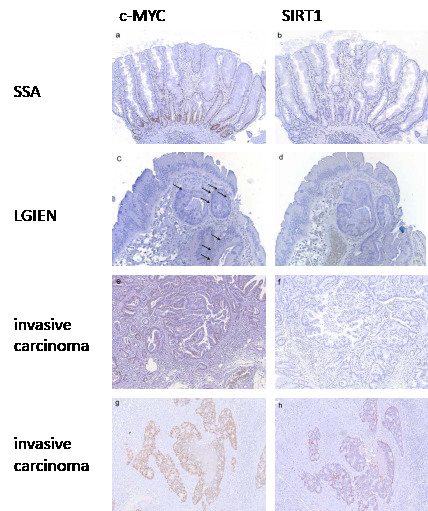 Table 3: Correlation of nuclear beta-catenin expression with KRAS, BRAF mutation and intraepithelial neoplasia in serrated lesions of the colon

Nuclear beta-catenin in relation to the BRAF/KRAS mutational status, c-MYC and SIRT1 expression 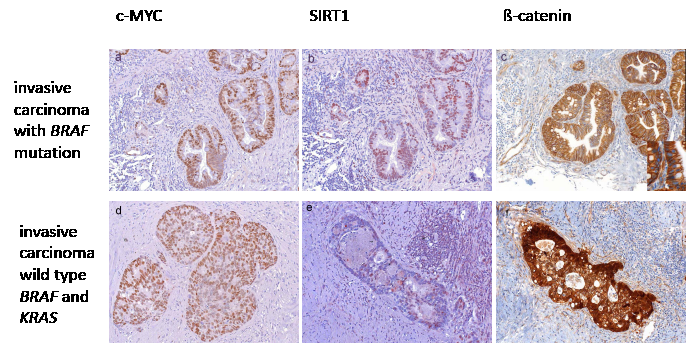 The evolving concept of serrated lesions of the colon comprises the notion of a sessile and traditional serrated pathway. Sessile serrated adenomas are more frequently found in the proximal colon, initiate through BRAF mutations and are commonly MSI. In contrast, traditional serrated adenomas are more often found in the distal colon, harbour KRAS mutations and are MSI-L or MSS [4, 9, 10]. In our collection the distribution and mutation status of cases reflects this concept. But despite the clear preferences of location and mutation status of serrated lesions, c-MYC and SIRT1 expression was unrelated to the morphologic subtype and side distribution.

A characteristic feature of serrated lesions of the colon is the resistance to apoptosis that has been linked to mutational activation of KRAS and BRAF [7, 24-29]. However, the molecular events downstream of oncogenic KRAS and BRAF responsible for the anti-apoptotic function in serrated lesions have not been completely defined. The pleiotropic SIRT1 deacetylase negatively regulates various pro-apoptotic factors, including p53, thereby antagonizing senescence and apoptosis in cancer cells [13-15, 30, 31] and in cells immortalized by c-MYC [11]. Here, we provide evidence that SIRT1 expression is elevated and correlates with c-MYC in serrated lesions. Furthermore, the expression levels of both proteins increased with higher malignancy of tumors. This is in accordance with recent observations, that c-MYC induces an increase in the level and activity of the NAD+-dependent SIRT1 protein deacetylase [11, 32-34] (reviewed in [35]). In this context we have previously identified a positive feedback loop, in which two processes involving the induction of nicotinamide phosphoribosyltransferase (NAMPT) and the sequestration of the endogenous SIRT1 inhibitor protein, deleted in breast cancer 1 (DBC1) mediate the c-MYC-induced activation of SIRT1. Finally, SIRT1 itself potentiates these effects by reducing the rate of degradation of c-MYC [11].

In lesions and invasive carcinomas of the serrated route, high c-MYC and SIRT1 levels were associated with K-Ras, B-Raf, or in a minor fraction, with Wnt pathway activation. Oncogenic mutations of KRAS and BRAF result in constitutive activation of the MAPK/ERK1/2 pathway and c-MYC phosphorylation [36, 37]. Upon phosphorylation by ERK1/2, degradation of c-MYC is inhibited through the K-Ras-induced activation of PI3K [38, 39]. Thus, the association with mutant KRAS and BRAF suggests that the up-regulation of c-MYC may be mediated by protein stabilization through MAPK/ERK1/2 pathway activation. In a smaller group of more advanced lesions without these mutations, c-MYC may be transcriptionally induced by the beta-catenin/TCF complex [2], since high levels of c-MYC were associated with the nuclear localization of beta-catenin. Aberrant nuclear accumulation of beta-catenin has been reported previously for serrated lesions [40-42]. Whereas mutations of the APC gene are very rare in serrated lesions, and mutations in the gene encoding for beta-catenin have not been observed so far [41, 43], hypermethylation of the APC promoter has been described for a subset of serrated adenomas [43]. Intriguingly, nuclear beta-catenin displayed the highest prevalence in wild type KRAS and BRAF lesions. Therefore, our data suggest, that enabling c-MYC activation either through oncogenic K-Ras or B-Raf, or transcriptionally by deregulation of Wnt signalling is crucial in both, the serrated route as well as in the classical route to colorectal cancer [2].

Higher levels of c-MYC can induce activation of p53 and apoptosis [44, 45]. However, as we have shown before, the c-MYC-mediated SIRT1 activation interferes therewith, since it suppresses p53-dependent and -independent apoptosis and antagonized senescence [11]. Hence, unscheduled c-MYC expression together with elevated SIRT1 activity in serrated lesions and invasive carcinomas may repress the two major tumor suppressive mechanisms, apoptosis and senescence and thus support cell survival, expansion and cancer progression. In line with such a role of SIRT1, only 17% of colorectal carcinomas with BRAF mutations and MSI, which are believed to originate from serrated precursor lesions, display p53 mutations [46]. Our previous studies of human samples and of a mouse model have revealed that serrated polyps and adenomas display high expression of the CDK inhibitor p16INK4a, a characteristic mark for senescence, which is lost in invasive carcinomas by CDKN2A promoter hypermethylation [7, 8, 47, 48]. SIRT1 localizes to promoters of aberrantly methylated genes [49] and it is weakly expressed in senescent, but high in immortalized cells [50]. In serrated lesions SIRT1 may therefore also be involved in antagonizing oncogene-induced senescence. This may be mediated through effects of SIRT1 on DNA methyltransferase 1 (DNMT1) activity, a key enzyme in DNA methylation [51]. Deacetylation of DNMT1 at specific lysines by SIRT1 enhances its methyltransferase activity. In line with these findings, increased SIRT1 expression was found significantly associated with CpG island methylator phenotype (CIMP)-high, MSI-high phenotype, and a high tumor grade in colorectal carcinoma [19] . Future studies will reveal the relevance of the effects in this novel crosstalk of the epigenetic regulators DNMT1 and the histone deacetylase SIRT1 in different cellular contexts and especially in serrated lesions of the colon. Interestingly, recent studies revealed that in chronic myelogenous leukemia (CML) SIRT1 inhibition can prevent the acquisition of mutations and may therefore represent a treatment to overcome drug resistance [52]. In addition, in a BCR-ABL transgenic mouse model inhibition of SIRT1 in combination with the tyrosine kinase inhibitor Imatinib leads to p53 activation-mediated elimination of cancer stem cells, indicating that SIRT1 inhibition may represent a strategy for targeting cancer stem cells [12].

Taken together, we provide evidence that c-MYC and SIRT1 are crucially involved in the alternative, serrated pathway to colorectal cancer. Thereby, oncogenic functions of c-MYC and properties of SIRT1, such as antagonizing apoptosis and senescence and/or epigentic regulation may contribute to tumorigenesis and may represent a novel target for future therapies. However, further studies will have to elucidate the exact functional role of SIRT1 in serrated lesions and determine the signalling pathways involved in the development of lesions without oncogenic BRAF or KRAS mutations.

All cases were classified with regard to BRAF and KRAS mutational status. KRAS was mutated in 22 (18%) cases, and BRAF mutations were detected in 73 (60%) cases, respectively. In 26 (22%) cases, neither KRAS nor BRAF was mutated.

c-MYC and SIRT1 expression were evaluated regarding nuclear expression pattern ranging from 0 – 3, for negative, low, moderate and strong staining. In hyperplastic polyps and sessile serrated adenomas, positive staining of the basal third of the crypts was defined as low. Moderate was defined as staining of the basal two thirds of the crypts, and strong was defined as staining from the base to the surface of the crypts. In sessile serrated adenomas with low grade and high grade intraepithelial neoplasia, only areas with intraepithelial neoplasia were taken into account. In traditional serrated adenomas and invasive adenocarcinomas, the percentage of positive cells was evaluated including negative (0%), low (1-30%), moderate (31-70%) and strong (71-100%) expression.

Regarding beta-catenin staining, only nuclear beta-catenin expression was taken into account. beta-catenin, c-MYC and SIRT1 staining that was confined to some nuclei of scattered cells at the bases of crypts (<5% positive cells) was considered as a normal mucosa staining pattern (Figure 1), which is consistent with the proliferative zone due to physiologically active Wnt signalling within the progenitor population of intestinal epithelium [20].