CCN: core regulatory proteins in the microenvironment that affect the metastasis of hepatocellular carcinoma?

Hepatocellular carcinoma (HCC) results from an underlying chronic liver inflammatory disease, such as chronic hepatitis B or C virus infections, and the general prognosis of patients with HCC still remains extremely dismal because of the high frequency of HCC metastases. Throughout the process of tumor metastasis, tumor cells constantly communicate with the surrounding microenvironment and improve their malignant phenotype. Therefore, there is a strong rationale for targeting the tumor microenvironment as primary treatment of HCC therapies. Recently, CCN family proteins have emerged as localized multitasking signal integrators in the inflammatory microenvironment. In this review, we summarize the current knowledge of CCN family proteins in inflammation and the tumor. We also propose that the CCN family proteins may play a central role in signaling the tumor microenvironment and regulating the metastasis of HCC.

Liver cancer (mainly hepatocellular carcinoma [HCC]) is a global health problem. In men, HCC is the fifth most frequently diagnosed cancer and the second most frequent cause of cancer death, with more than 80% of HCCs occurring in developing countries [1]. Approximately three-quarters of HCCs are caused by chronic hepatitis B virus (HBV) and hepatitis C virus (HCV) infections [2]. The natural survival time of patients with advanced HCC is only approximately 3 months. Even though many advanced strategy are used in patients with HCC (i.e., early detection, surgical resection, radiofrequency, and liver transplantation), the general prognosis of patients with HCC still remains extremely dismal, and this unfavorable outcome is attributed to the high frequency of HCC metastasis [3].

A growing body of evidence suggests that metastasis is an important event in the progression of many carcinomas and is responsible for as much as 90% of cancer-associated mortalities; however, it remains the most poorly understood component of cancer pathogenesis [4]. The process of metastasis is often viewed as a complex developmental process that can be simplified into two major phases. (1) Early cancerous cells are confined to the primary tumor microenvironment by the continued expression of adhesion molecules and the intact basal lamina. As the cancer progresses, some cells in the primary tumor microenvironment start the process of morphogenesis, termed EMT (Epithelial to Mesenchymal Transition). During the EMT process, the cells acquire mesenchymal cell properties, which facilitate local invasion and metastatic dissemination [5]. (2) While the tumor cells migrate to new target organs, they change back to epithelial cell phenotype in certain premetastastatic niche, termed MET (Mesenchymal to Epithelial Transition), and develop into a metastatic lesion at that distant site [6]. Phenotypic alterations are considered a hallmark for the progression of cancer and provide a new basis for understanding how malignancies develop.

In addition to the common intrinsic heterogeneity of cancer cells that results from genomic instability, a number of phenotypic alterations are induced by the tumor’s inflammatory microenvironment [7, 8]. While converting to and from the EMT and MET states in the process of tumor metastasis, tumor cells constantly communicate with the surrounding microenvironment. Therefore, the development of HCC is considered to be the result of different environmental risk factors, each involving different genetic, epigenetic, and chromosomal alterations [9]. The inflammatory condition is now recognized as a hallmark feature of tumor development and metastasis [10]. In contrast to the majority of cancer types that have a relatively simple tumor microenvironment (e.g., breast, lung, and melanoma), HCC is an extraordinarily unique type of cancer in which the inflammatory conditions are present before malignant changes occur. HCC commonly develops after chronic inflammation caused by a HCV infection, HBV infection, certain metabolic liver diseases, or alcoholic injury, all of which create a tumor-permissive milieu. The tumor microenvironment of HCC is not only composed of cells typically seen in other cancers (i.e., tumor cells, fibroblasts, invading inflammatory/immune cells, reactive oxygen and nitrogen species, tumor-associated cytokines, and chemokines). The microenvironment of HCC is also composed of hepatitis virus-associated inflammatory cytokines, chemokines, and growth factors, all of which create a dynamic microenvironment that contributes to the development of HCC [11]. Therefore, the liver tumor microenvironment is much more complex than that of any other cancer. The bidirectional cross talk between the tumor cells and the tumor microenvironment plays a fundamental role in the progression of the tumor and, concomitantly, the survival of patients [12, 13, 14]. 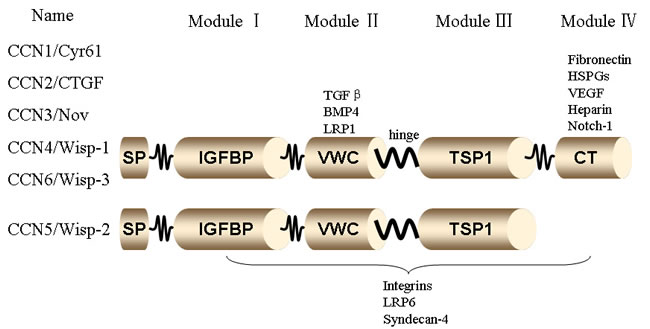 It may be more accurate to think of CCN family proteins as matricellular proteins that modulate cell-matrix interaction to modify the cellular phenotype [21]. CCN family proteins are not ubiquitously or constitutively expressed, but are under strict regulation by a number of extracellular stimuli. Many studies have shown how physiological and pathological events acting on each catalytic domain of CCNs affect differentiation [22], adhesion [23, 24], migration [25, 26], mitogenesis [27], chemotaxis [28] and angiogenesis [29]. Furthermore, CCN proteins participate in the development of cartilage and bone, the nervous system, and hematopoietic stem cells [30, 31, 32]. Many of the above-mentioned phenomena are also associated with cancer [33], implying that these proteins may also have a role in malignancy. Chronic liver damage is a paradigm of cancer-related inflammation caused by hepatitis virus infection, alcoholic injury, etc. Chemokines, cytokines, growth factors, and inflammatory mediators regulate the infrastructure of the tumor inflammatory microenvironment by deciding the signal transduction and functional outcome of tumor cells. This review summarizes the relevant literature on CCNs as core regulatory proteins that orchestrate the inflammatory microenvironment.

In HCC, the expression levels of CCN1, CCN2, CCN3, and CCN4 are closely correlated with certain biological characteristics and clinical features, including venous invasion, cellular differentiation, TNM stage, disease-free survival, and overall survival. All of these features are valuable in determining prognosis [34, 35, 36, 37, 38]. Chen et al [39] showed that CCN1 expression was downregulated in human HCC, and CCN1 suppressed hepatocarcinogenesis by inhibiting EGFR-dependent hepatocyte compensatory proliferation. Paradoxically, Zeng et al [35] reported CCN1 mRNA in carcinoma tissues were significantly higher than those in para-cancerous normal liver tissues, which play an important role in hepatocellular carcinogenesis and correlate with recurrence and metastasis of HCC. Li et al [40] also found that CCN1 was a direct downstream target of Wnt/β-catenin signaling, activation of β-catenin signaling elevated the level of CCN1 in HCC cells, which promoted the progression of HCC. It was proved expression of CCN2 was an independent factor associated with shorter OS in HCC [34, 41, 42]. Hou et al [43] proved CCN2 were related to the formation of HCC BM (Bone Metastases), which could serve as a potential prognostic biomarkers for BM from HCC [44]. While, the inhibition of CCN2 expression can block the progression of HCC [45]. Enhanced expression of CCN3 were found in HCC samples when compared to levels in matched non-cancerous tissues, and these results suggest that Nov was associated with the development of tumors in the live [34, 37]. CCN4 was also proved as a negative correlation with OS in HCC [34], contributing to the Wnt pathway activation [46]. No significant difference in CCN5 was found between HCC samples and matched-pair normal liver samples [34]. Although, it was reported overexpression of the hepatitis C viral core protein in Huh-7 cells caused an upregulation of CCN5 and increased proliferation of the cells [47], it was still hard to tell the role of CCN5 in HCC malignant phenotype. Report of CCN6 expression in HCC is still lacking. Our colleagues Ye et al [48] analyzed the cDNA microarray-based gene expression profile of HCC samples with or without extra-hepatic metastases. They found that CCN3 was significantly upregulated in metastatic HCC. Recently, we confirmed that high expression levels of CCN2 and CCN3 were correlated with poor prognosis in HCC patients using tissue microarray (unpublished data). We also analyzed the profiles of tissue from patients with oxaliplatin-resistant HCC and found significantly upregulated expression of CCN1 and CCN3 [49]. The expression of CCN family proteins in HCC clinical sample was summarized in Table1.

CCN family proteins paracrined by HCC stromal cells are also closely correlated with HCC progression. Our group has collaborated with the United States’ National Cancer Institute to compare the gene expression profiles of noncancerous surrounding hepatic tissue from primary HCC with or without metastases. This study found a unique change in the gene expression profile in the noncancerous hepatic tissues of metastatic tumors with more than 30% of them associated with inflammation and/or immune response functions. CCN3 was significantly upregulated compared with the liver tissue of non-metastatic HCC. CCN1, CCN2 also have corresponding upregulation, and CCN4 was down regulated significantly [50]. We confirmed this finding of higher expression levels of CCN2 and CCN3 in the noncancerous surrounding hepatic tissue from primary metastatic HCC using tissue microarrays (unpublished data). Kim [51] et al found that CCN1 is highly accumulated in the hepatocytes of human cirrhotic livers where it acts as a key regulator in the accumulation of reactive oxygen species (ROS) [52]. High levels of ROS could trigger the activation of macrophages and cause immunosuppression in the tumor microenvironment. The involvement of platelets in tumor progression has been well recognized for decades. CCN1 is released from or produced by activated platelets at levels more than 20-fold higher than any other growth factors [53], suggesting that platelets constitute a novel source of CCN1 release and may play central roles in tumor progression [54]. Higher serum CCN2 concentrations in patients with HCC are most likely due to the active fibrogenic tissue matrix surrounding the tumor [55] and played an important role in the progression of HCC and relationship with angiogenesis of HCC [56]. They also found that CCN2 silencing induced a sustained antifibrotic effect in a mouse model [57].

CCN proteins are inducible immediate early genes involved in diverse physiological and pathological processes after exposure to various stimuli. In unpublished data from our lab, we found higher expression of CCN proteins in the parenchyma and stroma of HCC tumors with extra-hepatic metastases. Taken together, this suggests that the malignant potential of HCC may be determined not only by the intrinsic heterogeneity resulting from genomic instability, but also may be determined by the tumor microenvironment, which is influenced by CCN proteins.

The Relationship between Inflammation Microenvironment and CCN Proteins

One hypothesis views tumors as non-healing wounds with a close link to the chronic inflammatory microenvironment. Supporting this idea, HCC typically occurs in an inflammatory fibrotic microenvironment in the liver, caused by chronic liver damage [58]. Global gene expression profiling has revealed that the tumor microenvironment is important in the biologic and prognostic classification of the tumor [50]. Inflammation is a complex process regulated by an extraordinarily large variety of immune cells and a cascade of cytokines and chemokines synthesized in the inflammatory region. This is especially true in HCC. Divella [59] et al demonstrated that tumor heterogeneity is closely linked with inflammation in the presence of HBV/HCV and confirmed that the presence of viral infections increases the risk for HCC development. Shin [60] et al found that HCV core proteins could promote hepatic fibrogenesis via upregulation of CCN2. Samuel [61] et al found that hepatitis B viral protein (HBx)-expressing hepatocytes showed an increased expression of CCN2, which is a major cause of liver fibrosis that eventually leads to cirrhosis and HCC. Bian et al [62] found that CCN1 expression in hepatocytes is involved in the hepatic proinflammatory response and macrophage infiltration.