In local and locally advanced anal squamous cell carcinoma, the standard of care for most patients is concurrent chemoradiation therapy, with a complete response rate of 80% [4]. Albeit effective, this has been the basic therapeutic paradigm for decades. Chemotherapy typically consists of a doublet of mitomycin-c (MMC) and a fluoropyrimidine administered concurrent to radiation. Flam and colleagues randomized 310 patients to receive radiation therapy (XRT) (45-50.4 Gy) along with either 5FU 1000 mg/m2 or 5FU and MMC (10mg/m2/dose for two doses). At 4 years, the 5FU/MMC arm had higher colostomy free and disease free survival rates. Surgical resection after failure of chemoradiation comes with morbid complications, but offers some remaining opportunity for cure [6, 7].

As metastatic ASCC is rare, there is limited experience to guide management. Treatment of systemic disease consists of chemotherapy administered with palliative intent, where the most accepted regimen used is cisplatin and 5FU. This use of a doublet of cisplatin and 5FU has demonstrated overall survival rates of 62.2% and 32.2% at 1 and 5 years, respectively [8]. Although there are reports on the use of different single agents and combined chemotherapy regimens in next line treatment of metastatic disease, these largely consist of single institution experiences or early phase clinical trials. A retrospective study conducted by Eng et al summarized a cohort of 76 metastatic anal cancer patients treated at a single institution. In their series, 5FU with cisplatin (PF) and carboplatin with paclitaxel (CP) were most commonly utilized as first line therapy. Although not statistically significant, this study suggested that PF has a median progression free survival of 8 months compared to only 4 months CP. The overall response rate was additionally higher with PF at 86% compared 54% with CP. Interpretation of this data is noted to be limited by an absence of prognostic information of the patients [9].

Women comprised 126 (63.3%) cases while men comprised 73 (36.7%). The mean age and range of the study subjects was 58.7 years and 31-89 years, respectively. Six cases were documented as positive for HPV or HIV; status was not provided on the remaining 193 cases. The majority of tumor samples were obtained from lymph nodes (pelvis and inguinal), rectum, or liver; frequency of tumor sample location by each organ site is summarized in Figure 1. No clear relationships between demographics and the resultant tumor profiles were identified. 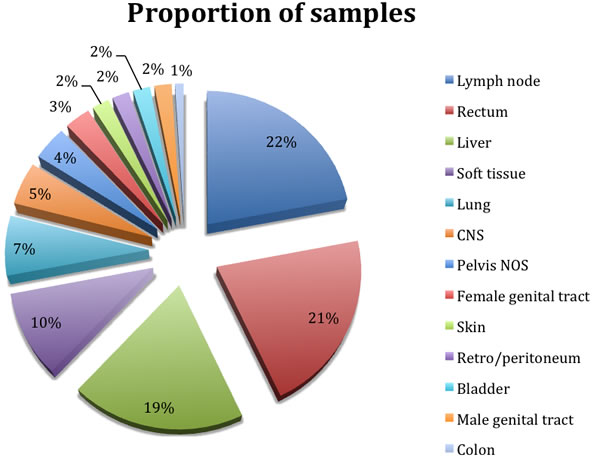 The frequency of expression and the ratio of various protein biomarkers identified in the tumor samples by immunohistochemistry are summarized in Table 1. The frequency of expression is depicted in Figure 2, noting that sample sizes reported in the corresponding Table 1 can help clarify the true ranking of these percentages. In summarizing these results, the biomarkers expressed in any of the tumor samples evaluated by IHC that have pharmacologic targets, based upon available biomarker compendia, and markers identified that suggest a particular pharmacologic resistance are included. From the IHC results, two targets of interest in current therapy of cancer management, HER2 and PD-L1, were not identified in any of the evaluated samples. There were 180 samples evaluable for HER2 and 12 samples evaluable for PD-L1 by IHC.

Table 1: The distribution of protein biomarker as identified by IHC, summarized by frequency and by ratio of positive to total number tested

Footnote (*) indicates biomarkers with increased resistance to a drug and/or drug class when expressed. 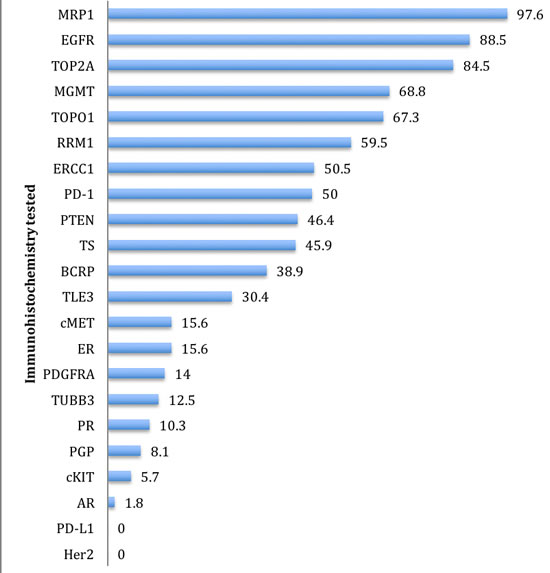 Figure 2: Percentages of biomarkers found to be positive by theranostic immunohistochemistry (IHC), as ranked from highest to lowest.

In situ hybridization was also performed to assess amplification of ERBB2 (i.e. HER2), as well as EGFR. Contrary to what was observed with the IHC analysis, 2% of the 99 cases analyzed did reveal amplification of HER2. Additionally, amplification of EGFR was identified in 7.4% of tumors evaluated. Select tumor samples were evaluated by ISH for MET TOP2A, and ALK, with no genetic aberrations (i.e. amplification or rearrangement) detected. The results of these ISH analyses are summarized in Table 2.

Next generation gene sequencing identified several mutations involving the PIK3CA/AKT pathway, including PIK3CA PTEN AKT1, and FBXW7. In specimens evaluated by NGS, KRAS was mutated in 2%. A number of gene mutations with therapeutic implications were not found in any of the samples evaluated. The frequency of the various mutation rates are summarized in Table 3a, and those mutations tested for but not identified are summarized in Table 3b.

Table 3b: Genes tested for mutations with no samples testing positive, is summarized by number tested, as determined by next generation sequencing (NGS) or Sanger sequencing

Table 4: In 12 cases, more than one simultaneous gene mutation was identified in a single tumor sample by NGS. The compositions of the multi-mutations are summarized

The overexpression of several proteins, as identified by IHC, further advances the understanding of why certain cytotoxic therapies may be ineffective in the treatment of this cancer. For example, a near-universal overexpression of multi-drug resistance-associated protein 1 (MRP1) is identified which, as discussed by Tamaki [17], leads to conventional cytotoxic therapy resistance via drug efflux. The overexpression of excision repair cross-complementing gene 1 (ERCC1), which has been described to confer resistance to platinum-based chemotherapy by Jiang [18] and others across various malignancies, is identified by IHC in half of the evaluated tumors. Similarly, thymidylate synthase (TS), which is identified in about 45% of the evaluated tumors, leads to fluoropyrimidine resistance, as described by Subbarayan [19]. The expression of these resistance-conferring proteins, as well as others that are indicated in Figure 2 and Table 1, advance the understanding of why advanced anal squamous cell carcinomas may be resistant to certain cytotoxic chemotherapy classes.

This profiling also suggests potential therapeutic options. EGFR was overexpressed by IHC in almost 90% of the tumors evaluated, suggesting a possible role for anti-EGFR targeting therapies such as cetuximab. This is similar to what is observed with squamous cell carcinomas of the head and neck, although EGFR expression has not universally correlated to better response to EGFR-directed therapies across all cancer types [20]. ISH analysis suggested few tumors had EGFR mutations. Moreover, only 2 tumors demonstrated mutations, which, as is the case in colorectal adenocarcinoma, has been suggested to confer resistance to anti-EGFR antibody therapy in ASCC [14]. This low mutation frequency suggests the limitation of anti-EGFR therapy associated with mutation would be rarely significant. This is supported by work previously done by Paliga [21], who found a greater than 90% rate of EGFR expression and a low rate of mutation. The use of cetuximab in the management of these cancers has already been explored by Lukan [10] with encouraging results as an alternative to standard chemotherapy, albeit in a small cohort of 7 patients. The results of this current analysis further emphasize the potential benefit of cetuximab as systemic therapy. Thus, an important conclusion of this analysis is that further formal analysis of anti-EGFR therapy is merited for anal squamous cell carcinomas.

This profiling of ASCC also identified several other therapeutic targets that could warrant investigation, based upon their action-ability in other cancer types. Almost a third of tumors evaluated were non-expressers of methylguanine-DNA-methyltransferase (MGMT) by IHC, suggesting a possible susceptibility to temozolomide. Of the 12 tumor samples evaluated for PD-1 expression by IHC, 50% were expressive, and this could suggest a possible role for an immunotherapeutic agent such as nivolumab or pembrolizumab. Of note, none of 24 tumor samples that were evaluated for PD-L1 demonstrated expression. No evaluations of the use of anti-PD-1 therapy in the management of anal squamous cell carcinoma are currently reported in the literature. However, while not therapeutically evaluated, a retrospective study of PD-L1 positivity was associated with a non-statistically significant trend towards a poorer RFS in ASCC, consistent with what has been observed with other cancer types [24]. Finally, there were additionally a small subset of tumors found to have HER2 amplification by ISH, and when identified, these tumors could potentially be candidates for therapy with HER2-targeting agents.

While less common, those ASCC that arise in the absence of HPV have been associated to mutation, and seem to be treatment resistant in comparison to their HPV-associated counterparts [30]. These HPV-negative ASCC are also ideal candidates for novel treatment strategies, such as what can be explored with tumor profiling. Of note, p16 was not included in the IHC panel, even though it may have a stronger concordance with HPV-positivity. This was excluded because the developed panel was intended to be a tumor agnostic panel, and p16, when identified, would lack a predictive utility. However, p16 inclusion in future IHC panels is certainly worth strong consideration.

The findings of a multiplatform approach such as this are limited therapeutically to those targets that have available treatments. In cases where therapies are not available for identified targets, profiling such as this could be useful to identifying novel targets for therapeutic development. Additionally, this approach is limited to the targets investigated and does not suggest as-yet-unknown targets that might otherwise be explored and exploited. Future trials should evaluate other biomarkers and pathways besides PIK3CA/AKT/mTOR that may be worth targeting at a later date.

This profile of ASCC already has revealed a number of intriguing findings that offer insights and inroads for further therapeutic investigation. These include possible explanations of tumor resistance mechanisms to certain cytotoxic chemotherapy. EGFR expression and low rates of and mutations support further investigation of anti-EGFR therapies for this cancer type, noting that expression of EGFR has not been universally correlated to therapeutic effect of targeting across all cancer types. A number of therapies could be explored through the possibility of targeting the PI3K/ATK/mTOR pathway. The results presented here are largely in agreement with smaller, similar studies, such as the FISH analysis performed by Martin and colleagues in 2014 [31]. As these and other studies develop, the expanded body of knowledge that they provide can refine these profiling techniques in order to identify reliable marker of targets for future therapeutic development.

Fluorescent in situ hybridization (FISH) evaluated for amplification of the ( [chromosome 17 centromere] probe), ( probe), ( probe; Abbott Molecular/Vysis, Abbott Park, IL), and ( probe) genes. The ratio > 2.2 was considered amplified (based on guidelines from the College of American Pathology [CAP]/ASCO [American Society of Clinical Oncology], 2007). amplification was defined as > = 2, or > = 15 EGFR copies per cell in > = 10% of analyzed cells. was considered amplified if > = 5 copies were detected, while amplification was defined as TOP2A/CEP17 ratio > = 2.0. ALK was also assessed using FISH in a few patients for gene rearrangement (Abbott Molecular/Vysis, Abbott Park, IL).

The frequency of the various protein expression, and gene sequence and amplification data was compared across the tumor samples that were analyzed, to assess for frequency and trends, in order to assess for possible therapeutic targets. These results were also compared to the available demographic patient data. Data analysis was performed using SPSS 20 (IBM, Armonk, NY) Statistical software and JMPv10.0 (SAS Institute Inc, Cary, NC).

Drs. Smaglo, Tesfaye, Boland, Halfdanarson, Meyer and Wang have no potential conflict of interest to report. Drs. Gatalica, Reddy, and Arguello are all employed by CARIS life sciences.