Association between serum uric acid and bone health in general population: a large and multicentre study

Uric acid (UA) is the final breakdown product of purine metabolism in humans, and it has been traditionally considered to be a risk factor for hypertension, diabetes mellitus, stroke, cardiovascular disease, renal disease, and metabolic syndrome [1-5]. High amounts of serum UA could lead to the deposition of urate crystals, causing gouty arthritis. However, studies have shown that serum UA might function as an antioxidant against oxidative stress in nervous system diseases such as multiple sclerosis, amyotrophic lateral sclerosis, Alzheimer disease, and dementia [6-9].

Therefore, the exact association between serum UA and bone health remains unclear, and a study involving a large multicenter population is required to clarify the association. The present study aimed to investigate the relationship between serum UA and bone loss, including BMD, the T-score, the Z-score, osteoporosis, and osteopenia, in a large multicenter Chinese population.

Table 1: Clinical and biochemical characteristics of the study cohort grouped as males and females 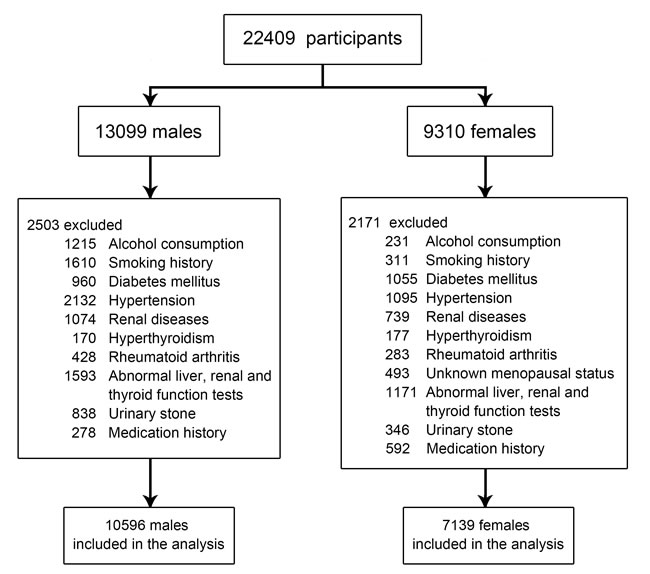 The participants were divided into four quartiles (Q1, Q2, Q3, and Q4) according to the serum UA levels. Before adjusting for potential confounders, BMD was found to significantly increase across the quartiles in males and postmenopausal females, and a non-significant inverse trend was observed in females (Figure 2a). A covariance analysis was performed to investigate the association between serum UA levels and BMD after controlling for confounders. After adjusting for age; height; weight; systolic blood pressure (BP); levels of serum glucose, total protein, blood urea nitrogen, serum calcium, serum phosphorus, alkaline phosphatase, alanine aminotransferase (ALT), aspartate aminotransferase (AST), triglycerides, total cholesterol, total bilirubin, and serum creatinine; and the estimated glomerular filtration rate (eGFR), BMD was found to have an increasing trend across the quartiles in male, female, and postmenopausal female participants (Figure 2b). BMD and serum UA levels were affected by obesity; therefore, the participants were divided into subgroups according to body mass index (BMI; BMI < 25 and BMI ≥ 25), and the increasing trend was confirmed in the subgroups (Figure 2c and 2d). 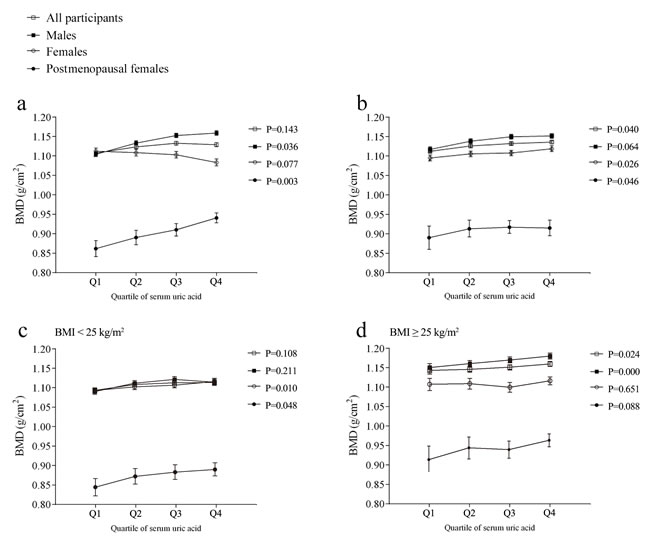 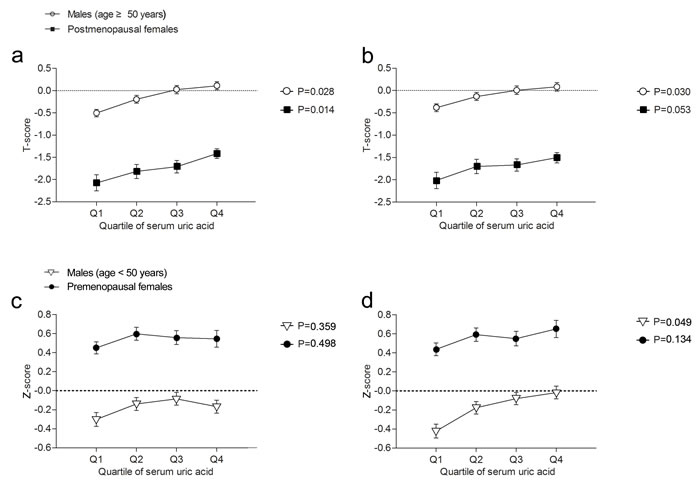 Figure 4: Odds ratios (ORs) and 95% confidence intervals (CI) for a. at least osteopenia and b. osteoporosis according to the serum uric acid quartiles after adjusting for confounders.

The present study found that a high serum UA level was associated with a high BMD, T-score, and Z-score, and low ORs for at least osteopenia and osteoporosis.

Previous studies speculated that serum UA could serve as an antioxidant in patients with osteoporosis and could prevent the reduction of BMD in certain populations [17-21]. Recently, a study by Zhang D et al. did not show the protective effects of UA in a general US population, and the negative results were confirmed in an animal study [16]. The majority of these previous studies mainly focused on the association between serum UA levels and BMD, and ignored other related variables, such as the T-score, Z-score, and prevalence of osteoporosis or osteopenia. The T-score and Z-score are considered key variables in the evaluation of bone loss.

In the present study, we found a positive association between serum UA levels and BMD after adjusting for confounders, which differs from the finding of the study performed by Zhang D et al. [16]. Additionally, further analysis demonstrated a positive interrelated relationship of serum UA levels with the T-score and Z-score. Moreover, the ORs for at least osteopenia and osteoporosis decreased from the low serum UA group to the high serum UA group in a dose-dependent manner. Furthermore, the protective effect of serum UA on bone health was confirmed in normal weight and overweight participants. These findings indicated that the trends were highly consistent independent of BMD, the T-score, the Z-score, at least osteopenia, and osteoporosis.

We comprehensively analyzed BMD, the T-score, the Z-score, and ORs for at least osteopenia and osteoporosis in this study. As with BMD, the T-score and Z-score might accurately and directly reflect the bone loss of specific individuals by considering age, sex, and ethnicity. Additionally, T-score-based subgroup (ORs for at least osteopenia and osteoporosis) analyses might help to amplify the minor differences in bone loss among different serum UA levels. Our study participants were recruited from five medical centers in China, and this might attenuate the population and regional variances in the present study.

Serum UA is a commonly measured biochemical parameter in health examinations and our results provide epidemiological evidence that serum UA might have a beneficial effect on bone health. Therefore, serum UA might be used to select individuals for DXA in order to assess osteoporosis or osteopenia.

The present study has several strengths. First, we collected data from 17,735 participants at five medical centers in China. The data included a broad spectrum of anthropometrics, laboratory assays and measurements, and BMD measurement variables. Additionally, the present study included participants with a wide age range (20-90 years). Second, we performed a comprehensive analysis of the correlation between serum UA levels and bone loss. Furthermore, a dose-dependent protective effect of serum UA on bone loss was noted in our study.

The present study has some limitations. First, this was a cross-sectional study; therefore, it is difficult to conclude that there is a causal relationship between serum UA levels and bone loss. The follow-up of populations is important and meaningful. Second, fractures are one of the most common and serious complications of bone loss, and their incidence should be recorded in a further study. Third, this study did not evaluate dietary intake, such as intake of vegetables and fruits, which might have influenced bone health.

This large and multicenter general population-based study found that serum UA is associated with BMD, the T-score, and the Z-score, and has a strong protective effect against at least osteopenia and osteoporosis. Further studies are needed to elucidate the exact mechanisms by which serum UA contributes to bone loss.

We performed a retrospective and consecutive cohort study from October 2009 to December 2014 at the following five medical centers: Sir Run Run Shaw Hospital Affiliated to Zhejiang University, Shanghai Ninth People’s Hospital Affiliated to Shanghai Jiaotong University School of Medicine, First Affiliated Hospital of Wenzhou Medical University, Taizhou Enze Medical Center, and Shaoxing People’s Hospital. The study participants consisted entirely of community individuals who visited these medical centers for health examinations and underwent extensive screening tests for the early detection of diseases, such as malignancy and osteoporosis. A total of 22,409 participants were enrolled. Participants diagnosed with diabetes mellitus, hypertension, hyperthyroidism, rheumatoid arthritis, gout, or urinary stones were excluded. Additionally, participants with a history of alcohol consumption (more than 20 g alcohol per day with current or past) or smoking (more than 10 cigarettes per day with current or past) and women with unknown menopausal status (MS) were excluded. Moreover, participants with abnormal results in liver, renal, or thyroid function tests were excluded from this study. Furthermore, participants on medications that could influence bone metabolism, such as diuretics, estrogens, and bisphosphonates, for a long period ( > 3 months) were excluded. This study was approved by the ethics committees of all five medical centers, and the requirement of informed consent was waived owing to the retrospective nature of the study.

Data on the baseline characteristics of the participant were collected. Age, smoking history, alcohol consumption history, medication history, MS, and medical history were recorded using a standardized questionnaire. MS was categorized as follows: 1, premenopausal (regular menstrual cycles); 2, perimenopausal (menses or amenorrhea of at least three months but less than 12 months); and 3, postmenopausal (amenorrhea for 12 consecutive months). BP was measured in the resting state with a standard mercury sphygmomanometer. Height and weight were measured by trained nurses, with participants wearing a light gown, and BMI was calculated for all participants.

Areal BMD (g/cm2) of the lumbar spine (L1 to L4) was measured using DXA with Lunar equipment (Prodigy; Lunar, Madison, WI). All measurements were taken by experienced operators on the same parameter settings following standardized procedures. A standard quality control (QC) program, including daily calibrations with machine-specific phantoms, was used in the medical centers. A total of five Lunar devices were used in this study, and they were cross-calibrated. The same densitometer was used throughout the study. The performance of the DXA scanner was monitored throughout the study. Routine daily QC scans of a spine phantom were performed, and the coefficients of variation (CVs) for QC BMD measurements in the five medical centers were 0.91%, 0.85%, 0.82%, 0.95%, and 0.89%. In vivo reproducibilities were estimated from duplicate scans (60 patients with repositioning between scans in each medical center) as the CVs for BMD. The CVs for lumbar spine BMD in the five medical centers were 1.15%, 1.07%, 0.95%, 1.22%, and 1.01%. The BMD measurements provided absolute values for the lumbar spine, and the BMD values were compared with those of healthy young Chinese adults of the same sex and ethnicity (T-score) or an age-, sex-, and ethnicity-matched reference population (Z-score). According to the World Health Organization, the T-score is the relevant measure when screening for osteoporosis and osteopenia in postmenopausal women and men aged ≥ 50 years. The classification criteria of the World Health Organization are as follows: normal (T-score ≥ −1.0), osteopenia (−1.0 > T-score > −2.5), and osteoporosis (T-score ≤ −2.5). In this study, participants with osteoporosis and osteopenia were classified as “at least osteopenia.”

The data are presented as means ± standard deviations or percentages. Categorical variables were compared using the χ2 test or Fisher’s exact test, as appropriate, and continuous variables were compared using the Wilcoxon signed rank test. The relationships of serum UA levels with BMD, the T-score, the Z-score, osteopenia, and osteoporosis were investigated after controlling for various confounders. The potential confounding factors included age; height; weight; systolic BP; levels of total protein, serum calcium, serum phosphorus, alkaline phosphatase, blood glucose, and blood lipids; and liver function. Linear regression analyses and covariance analyses were performed to estimate the trends of the mean BMD, T-score, and Z-score across the increasing subgroup-specific quartiles of serum UA in unadjusted and multivariable-adjusted models. Binary logistic regression analyses were performed to determine the correlation of serum UA levels with osteoporosis and at least osteopenia after adjusting for potential confounders. ORs and corresponding 95% CI were calculated. All statistical analyses were performed using SPSS 16.0 software (IBM, Armonk, NY). A two-sided P-value < 0.05 was considered statistically significant.

No benefits in any form have been or will be received from a commercial party related directly or indirectly to the subject of this manuscript.

10. Manolagas SC. From estrogen-centric to aging and oxidative stress: a revised perspective of the pathogenesis of osteoporosis. Endocr Rev. 2010; 31:266-300.