Aging is an inevitable trend of the world’s population, and it is accompanied with serious age-related health issues in modern society that must be investigated. The risks for high cholesterol, hypertension, ventricular hypertrophy, diabetes, cerebrovascular disease, ischemic heart disease, myocardial infarction, obstructive sleep apnea (OSA), changes in tissue macrophages and related cancers increase with aging [1-6]. According to World Health Organization statistics, heart disease is the leading causes of death in the world. Moreover, The Department of Health in Taiwan published the top ten leading causes of death and reported that cardiovascular diseases (CVDs) are the second major cause of death [7] and lead to atherosclerosis, hypertension and heart failure.

The process of heart failure includes stress-induced cardiac remodeling, cardiac apoptosis, cardiac fibrosis and heart failure. Cardiac remodeling in CVD is one of the most frequently occurring characteristics of aged hearts [8, 9]. The risk reasons for cardiac remodeling during aging include heredity, diabetes mellitus, obesity, hypertension, hyperlipidemia, and smoking [10]. Previous studies indicated that aging induced an inflammatory response in the rat heart [11, 12]. Tumor necrosis factor α (TNF-α), nuclear factor-κB (NF-κB) and cyclooxygenase 2 (COX-2) are the major protein markers of the cardiac inflammation pathway [13, 14]. Inflammation, myocardial injury and hypertension results from pathological hypertrophy, which cannot be reversed [15]. The interleukin 6 (IL-6) signaling pathway is a major pathway that regulates cardiac hypertrophy, IL-6 and IL-6 receptor-activated downstream genes, such as the mitogen-activated protein kinase 5 (MEK5), extracellular signal-regulated kinase (ERKs) and calcineurin, which promotes the translocation of transcription factor-signal transducer and activator of transcription 3 (STAT3) and GATA binding protein 4 to the nucleus [16]. Previous research on the concentric hypertrophy pathway demonstrated that mitogen-activated protein kinase (MEK1/2) activated ERK1/2 and c-Jun N-terminal kinase (JNK), which induced calcineurin expression and promoted the transcription factor nuclear factor of activated T-cells, cytoplasmic 3 (NFATc3) into the nucleus [17] and translocated downstream gene b-type natraretic peptide (BNP), the levels of BNP which is a risk for heart disease [18]. Some studies indicated that activation of the MEK5/ERK5/STAT3 signaling pathway promoted eccentric hypertrophy, which is one type of pathological hypertrophy [19, 20].

Fibrosis is the end-stage step after cardiac myocyte apoptosis [21]. Fibroblasts result in fibrosis, which leads to reduced cardiac physiological functions [22]. Heart injury and remodeling, such as inflammation and hypertrophy, induce cardiac fibrosis, which plays an important role in progression of heart disease, but the mechanisms and risk factors of fibrosis are not clear [23]. Our recent paper demonstrated that transforming growth factor beta (TGF-β) activated downstream signaling pathways and increased connective tissue growth factor (CTGF) [24]. CTGF expression in the fibrosis pathway upregulated and translocated to the cell nucleus, which leads to fibroblast proliferation [25]. Our previous paper demonstrated that another fibrosis pathway of fibroblast growth factor 2 (FGF-2) activated urokinase/tissue-type plasminogen activator (uPA/tPA) and matrix metalloproteinase 2 (MMP-2) in cardiomyoblast cells [26]. Moderation of exercise training prevents colonic inflammation via regulation of peroxisome proliferator-activated receptor gamma in obese mice [27], and exercise training reduced pathological cardiac hypertrophy, which was induced by pressure overload [28]. Another paper indicated that exercise training reduced vascular fibrosis in obese rats [29]. This research demonstrated that exercise training improved some protective function, but there was no evidence indicating that exercise training prevented heart injury in natural aging rats.

Exercise training decreased the risk for heart failure [32] and improved cardiac function [9, 33]. This study used moderate exercise training of open and free swimming in warm water at a suitable depth in a swimming pool to avoid excessive fear of drowning and struggle. The effects of this moderate swimming exercise training on aging-induced cardiac inflammation, hypertrophy and fibrosis injuries in rat hearts were investigated. 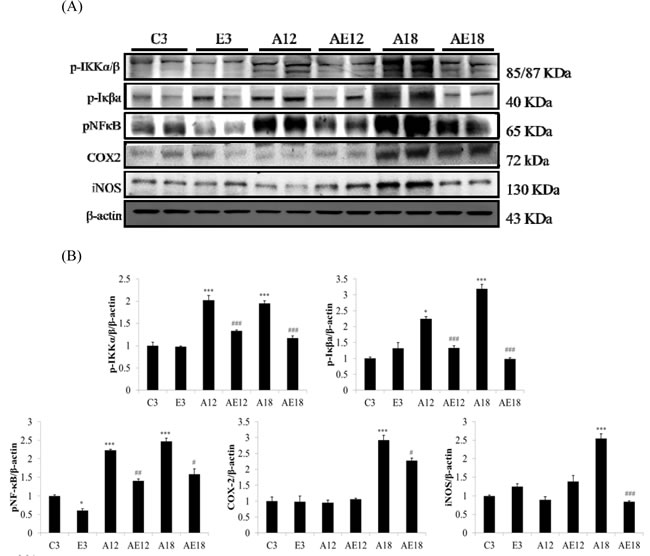 Rat body weights (BW) were measured and analyzed. Table 1 shows that the BW of rats increased with increasing age, and BW decreased after exercise training, especially in the aging groups (AE12 and AE18). Rat heart tissues were analyzed to compare differences between groups. Residual adipose tissue and any remaining blood was removed, and paper was used to dry excess water. Whole heart (HW) weight and tibia length were determined in each group.

We investigated the correlation between HW weight and tibia length. This value avoids external factors and more closely displays changes in HW weight for comparisons between groups. Comparisons of this ratio between each groups demonstrated that the ratio in experimental rats changed with HW weight. Table 1 indicates that the HW weight and heart chamber wall thickness (Figure 2) increased proportionally with age. HW weight increased with age in the aging without exercise rats (A12, and A18). The HW weights of the exercise training groups (E3, AE12, and AE18) were reduced (P < 0.05). The exercise training effect was demonstrated in the young group (E3) and aging groups (AE12, AE18), and it exhibited a very significant difference.

Table 1: Characteristics of aging rats with or without exercise training (A and AE)

Histopathological tomography analyses of whole hear tissues were performed using H&E staining (Figure 2A). Images were viewed under a microscope and the control group C3 exhibited normal cardiac myocyte architecture and volume. However, after measured by imageJ (Figure 2B), the heart sizes in aging rats (A12, and A18) were found to be increased, and heart walls were thickened. Heart chambers (left ventricular and right ventricle) narrowed with age, but this phenomenon was rescued in both aging with exercise training groups (AE12, and AE18). 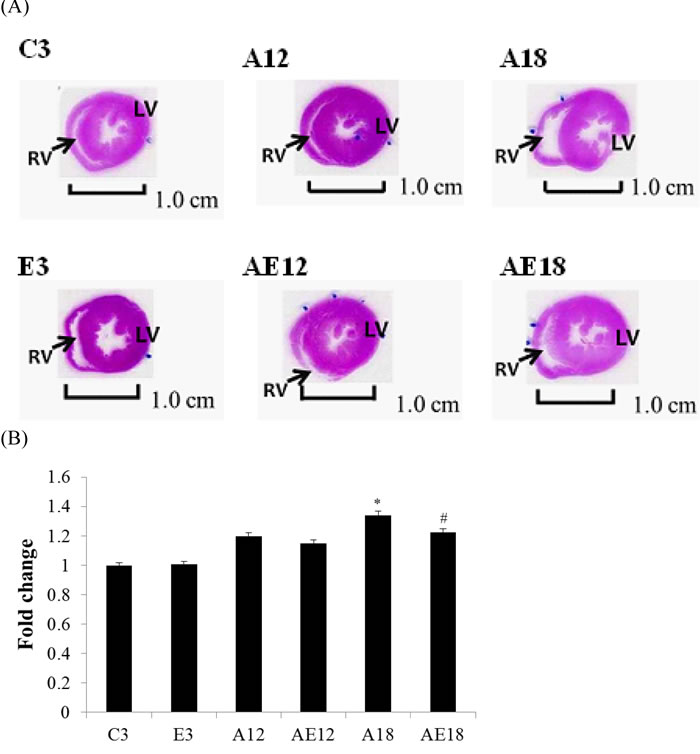 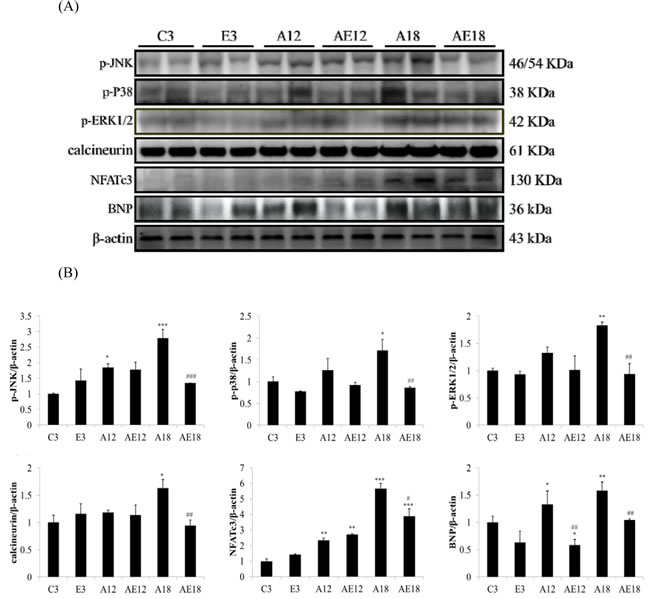 Aging is a risk factor for heart failure. This study demonstrated that aging induced cardiac inflammation and pathological cardiac hypertrophy (Figures 1-3), which follows the process of heart failure. We detected cardiac fibrosis using Masson’s trichrome staining of heart tissue sections (Figure 4). Collagen accumulation occurred with aging in the aging groups (A12 and A18). The collagen accumulation in the A18 group was more serious than the A12 and C3 groups. Exercise training reduced collagen accumulation in aging rats groups (AE12 and AE18). We also investigated the fibrosis molecular signaling pathways. Figure 5A shows that TGFβ1, which is the ligand in the TGF-dependent fibrosis pathway, was up-regulated in the aging groups (A12 and A18) and resulted in CTGF overexpression compared to the control group (C3). The aging with exercise training groups (AE12 and AE18) exhibited a reversal of aging-activated TGF-dependent fibrosis pathway expression (Figure 5A). We investigated FGF2/uPA/MMP2 in the cardiac fibrosis pathway. FGF2 expression was up-regulated in aged rats (A18), and aging also induced the expression of the down-stream genes uPA and MMP2 (Figure 6). Notably, exercise training prevented aging-induced cardiac fibrosis in the AE18 group, after exercise training reduced FGF2, uPA and MMP2 expression. 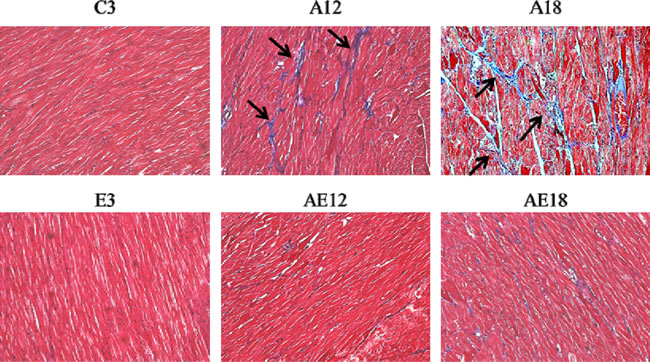 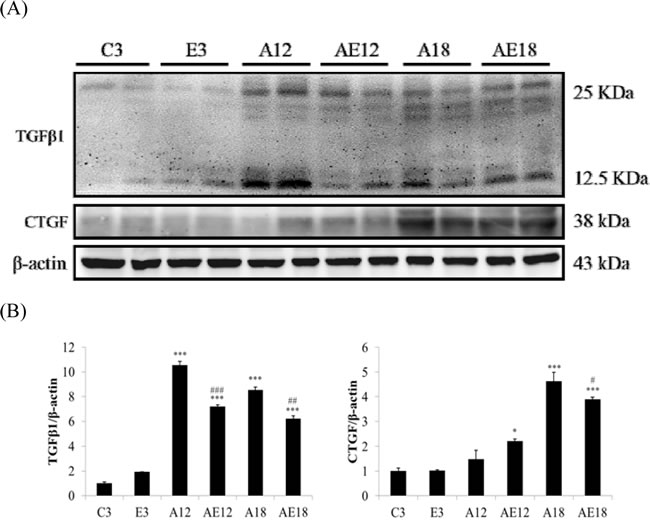 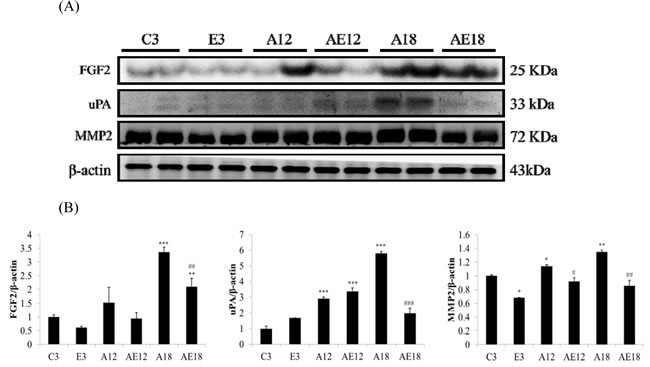 It is well known that reactive oxygen species (ROS) also play a role during aging, previous studies revealed that aging-associated cardiovascular disease involve the role of nicotinamide adenine dinucleotide phosphate-oxidase induced ROS accumulation resulting in cardiac inflammation and fibrosis [35-37]. Many researches have shown that drug or herbal extract mediated amelioration of cardiac injury is correlated with the extent of ROS scavenging [36, 38]. In this paper we revealed that moderate exercise can attenuate the aging-induced cardiac inflammation, hypertrophy and fibrosis injuries of rat hearts, however we need more experiments to verify whether correlation of ROS regulation and moderate exercise effect on cardiovascular disease in aged rats. 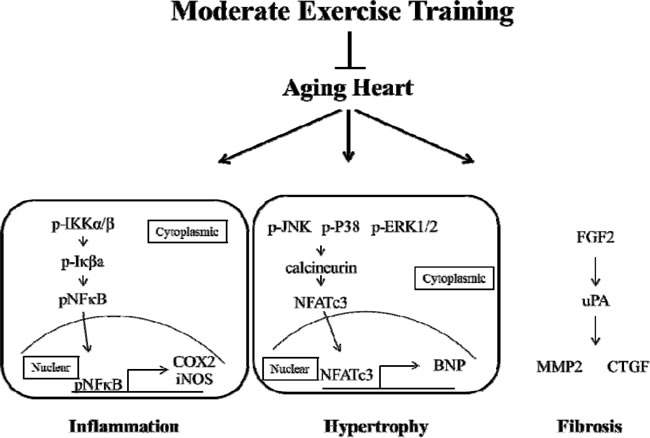 The exercise training protocol was based on a previous protocol [7, 34]. Rats in the control group were soaked in the right amount of water, and the water temperature was 25±2oC. The depth of swimming pool (35 cm) could not lead to rats drowning, and there were only two rats swimming at the same time. Exercise training began for rats in the exercise group (E3, AE12, AE18) swam for 20 min per day for the first 2 weeks. Swimming training time was extended to 30 min per day at the third week. The swimming training time was extended to 1 h per day in the remaining weeks, and all of the swimming times were recorded 5 times weekly. Animals were sacrificed after the experimental period and heart tissues were collected. The left ventricle tissues were isolated, and the tibia length was measured.

The entire heart weight was measured, and the left ventricle tissues from each group were isolated and washed 3 times in PBS buffer. Tissue samples (0.1 mg) were collected, and 1 mL lysis buffer (50 mM Tris-HCL, 1% NP-40, 0.5% Na-deoxycholate, 0.1% SDS, 150 mM NaCl, 2 mM EDTA, 50 mM NaF) was added to the mixture. The tissue was homogenized for 5 min and centrifuged at 2,200 rpm at 4 °C. Samples were homogenized, centrifuged at 12,500 rpm, and a clean upper layer suspension was extracted. The centrifugation step was repeated, and a clean upper layer suspension was extracted.

The heart tissue cross-section were made from identical location and stained by hematoxylin and eosin. Heart chamber area was measured by imageJ software.

Rat heart tissue from each group was stored in 10% formalin for 2 weeks, dehydrated in an ascending series of alcohols (75%, 85%, 90%, and 100% alcohol, 5 min each) and embedded in paraffin wax. The 2 μm-thick paraffin sections were sliced from these paraffin-embedded tissue blocks. Tissue sections were de-paraffinized via immersion in xylene (3 times, 5 min each) and rehydrated using an descending series of alcohols (100%, 90%, 85%, and 75% alcohol, 5 min each). Biopsy samples were stained using Masson’s trichrome stain to investigate heart morphological and fibrotic changes. Blue staining represented collagen accumulation. The results were visualized using an OLYMPUS microscope.

The experimental data are provided as the means ± SEM. Student ’ s t test was used to compared two differences groups. One-way ANOVA was used for comparisons between multiple groups. P <0.05 was considered significant.

This study was supported in part by the Taiwan Ministry of Health and Welfare Clinical Trial and Research Center of Excellence (MOHW104-TDU-B-212-113002).

9. Wang M and Shah AM. Age-associated pro-inflammatory remodeling and functional phenotype in the heart and large arteries. Journal of molecular and cellular cardiology. 2015; 83:101-111.

31. Smith RN, Agharkar AS and Gonzales EB. A review of creatine supplementation in age-related diseases: more than a supplement for athletes. F1000Research. 2014; 3:222.

49. Levine BD. Response to the Letters Regarding Article, “Can Intensive Exercise Harm the Heart? The Benefits of Competitive Endurance Training for Cardiovascular Structure and Function”. Circulation. 2015; 131:e525.