To confirm these results we focused on circulating angiogenic cells (CACs) from a subgroup of 10 CTR, 15 T2DM NC and 15 T2DM patients with MACE. CACs from T2DM patients expressed higher miR-21-5p and lower miR-126-3p levels than CACs from CTR. Furthermore, CACs from T2DM + MACE showed the highest levels of miR-21-5p.

Circulating miR-21-5p and miR-126-3p emerge as dynamic biomarkers of systemic inflammatory/angiogenic status. Their expression levels in CACs from T2DM with MACE suggest a shift from a proangiogenic to a proinflammatory profile.

Type 2 diabetes mellitus (T2DM) is an increasingly serious public health problem, since the number of affected adults and the proportion of T2DM patients with diabetic complications is expected to grow substantially in future decades [1]. The common and severe complications of T2DM are silent killers and are often irreversible at the time of diagnosis [2]. Genetic variability does not account for the current T2DM epidemic nor for its complications. Therefore, innovative strategies for stratifying patients with T2DM complications using blood-based biomarkers are being sought all over the world [3, 4]. The underlying pathogenesis of T2DM complications is not easily elucidated, because diabetic complications are characterized by heterogeneous phenotypes. A recent meta-analysis of randomised controlled trials has demonstrated that the benefit-risk ratio of intensive glucose lowering treatment, administered to prevent diabetic vascular complications, remains uncertain [5]. This suggests that the parameters currently used to monitor T2DM progression do not adequately predict the probability of developing complications. It is therefore of the utmost importance to identify new prognostic biomarkers capable of establishing evidence-based clinical practice recommendations for patients who are at increased risk of T2DM-related complications. Recently, epigenetic alterations have emerged as key factors in age-related diseases (ARDs), including T2DM and its complications [3, 6]. Factors associated with diabetic complications, including hyperglycaemia, oxidative stress and inflammatory factors, can modulate epigenetic mechanisms, altering gene expression in target cells, especially endothelial and immune cells. MicroRNAs (miRNAs) are a broad class of small, non-coding RNAs involved in the modulation of gene expression, either silencing or activating transcription via sequence-specific DNA/RNA binding [7]. Initially believed to leak passively from dead cells, miRNAs released into the bloodstream are emerging as an organized and controlled secretion process involving different shuttles [8-13]. Such mediators of epigenetic information have been extensively investigated in recent years as potential biomarkers of ARDs, including T2DM [14-19].

MiR-21 and miR-126 - now miR-21-5p and miR-126-3p, based on the latest miRBase release (V.21) - are expressed mainly by cells involved in the modulation of inflammatory response and vascular homeostasis, and therefore are expected to be significantly modulated in T2DM and its complications [20]. MiR-126-3p is involved in modulating vascular regeneration and mobilization of hematopoietic stem/progenitor cells, and was therefore classified as an “angiomiR”; it was one of the first miRNAs to be found in reduced circulating concentrations in T2DM patients [14-16]. Its downregulation has been detected in endothelial tissues of diabetic mice with peripheral artery disease as well as in endothelial progenitor cells from diabetic patients and in human umbilical vein endothelial cells (HUVECs) cultured under hyperglycaemic conditions [16, 21, 22].

MiR-21-5p was initially classified as an “oncomiR”, since it is deregulated in almost all cancer types [23]. More recently it has also been implicated in other roles, including the modulation of inflammation and tissue repair, and has therefore also been classified as an “inflammamiR” [24-30].

We focused our study on miR-126-3p and miR-21-5p levels in plasma and CACs from healthy subjects and diabetic patients, to investigate their potentiality as diabetic biomarkers in relation to the main diabetic complications .

The chemical-clinical, and anthropometric characteristics of the studied groups, 107 healthy CTR subjects and 193 T2DM patients, 76 patients without (T2DM NC) and 117 patients with (T2DM C) diabetic complications, are reported in Table 1. Since T2DM group included a greater proportion of males than the CTR group, T2DM C patients were older than CTR subjects and males were a greater proportion than among T2DM NC patients as well as CTR subjects, all subsequent analyses were adjusted for age and sex.

Table 1: Chemical, clinical, and anthropometric characteristics of CTR subjects and patients without and with T2DM complications 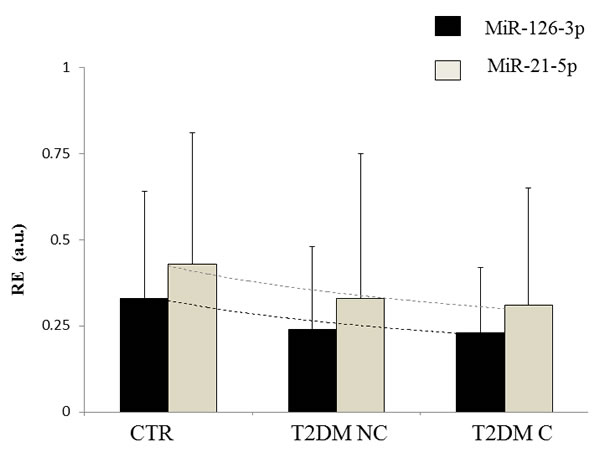 ANCOVA adjusted for age, sex, and number of complications. Levels lower than 0.05 in bold. 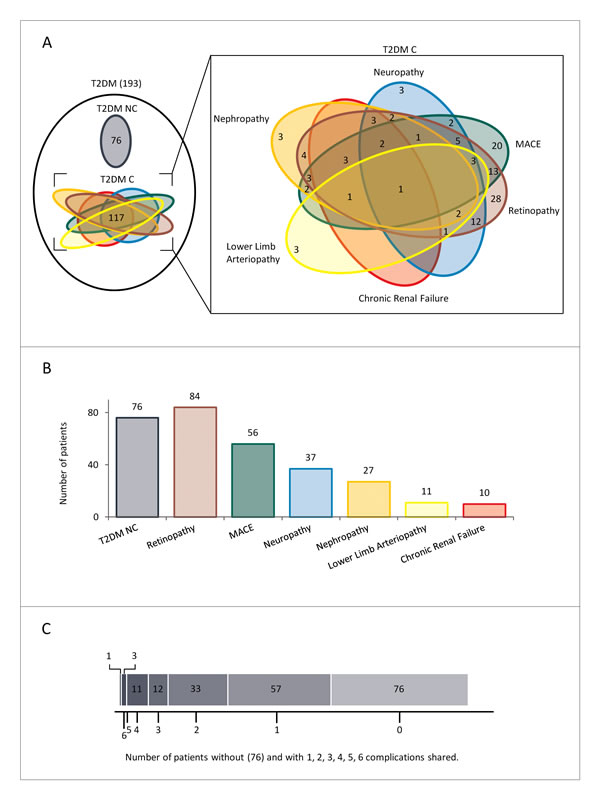 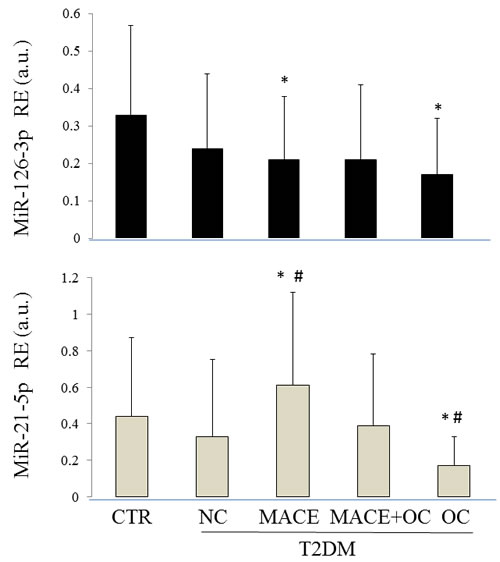 Since it has been reported that aspirin treatment may affect circulating levels of miRNAs [31], we asked our MACE patients whether they were taking aspirin treatment and found that they accounted for only 3 %. 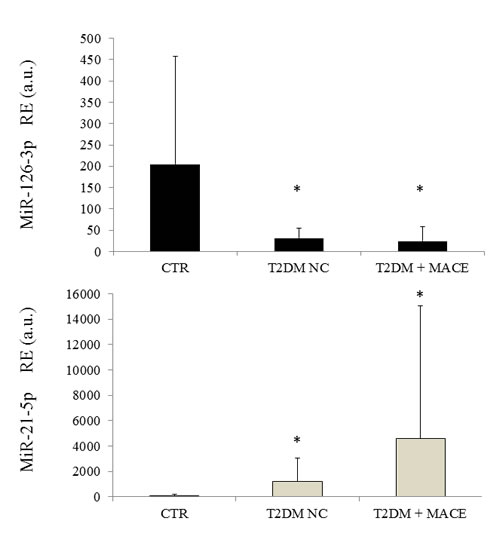 Fasting blood glucose is the current diagnostic criterion for diabetes, being globally accepted for almost a decade. However, information regarding insulin resistance and type 2 diabetes has increased exponentially during the last years, suggesting the existence of complex networks that regulate energy balance, in close association with the immune system and chronic inflammation [32]. A broader view of this paradigm, prompted us to research for new potential biomarkers, such as circulating miR-126-3p and miR-21-5p, since these miRNAs were associated with endothelial dysfunction and inflammation, two milestones of T2DM progression. According with previous results, we found that both miRNAs levels decreased from CTR subjects to diabetic patients [15]. An innovative aspect of our study was to analyse circulating miRNAs levels according to the presence of diabetes complications as a whole and grouped as specific complications. We observed that miR-126-3p and miR-21-5p levels declined significantly from CTR to T2DM non complicated and T2DM complicated patients. When the analysis focused on patients with specific complications, significantly higher miR-21-5p and lower miR-126-3p levels were seen in T2DM patients with previous episode of myocardial infarction (MACE). These observations are in accordance with the results of a previous prospective study showing that higher circulating and microvesicles-contained miR-126-3p levels are protective against MACE [20]. Notably, we analysed in our retrospective study only a group of T2DM patients survived to the previous MACE.

Moreover, our and others previous data suggest that MACE is a potent inducer of miR-21-5p release in the circulation [25, 33-35]. MiR-21 transfer/ hyperexpression has been hypothesized as mechanism promoting cardiomyocyte survival during acute ischemic events, and cardiac fibroblasts proliferation after the acute event [36-38].

However, it was recently highlighted an link between miR-21 expression levels and angiogenic properties of endothelial cells; miR-21 hyper-expression suppresses endothelial progenitor cells (EPC) proliferation [39] and contribute to endothelial cell senescence [40]. Moreover, we observed a significant positive correlation between circulating miR-21-5p and BMI. Recently it was reported that obesity is related to miR-21-5p expression [41] and to pro-angiogenic potential inducing a modulation of miRNAs secretion [42], suggesting a potential link between circulating miR-21 levels, BMI and pro-angiogenic properties.

When we assessed miR-126-3p and miR-21-5p levels in CACs, a reduced miR-126-5p levels and an increased miR-21-3p expression levels were observed in T2DM patients (both T2DM NC and T2DM + MACE) compared to CTR. Previous data on endothelial progenitor cells from diabetic patients shoved a reduced miR-126 expression [24], and an overexpression of miR-21 was reported in response to high glucose in endothelial cells [43].

Since miR-21 and miR-126 modulate inflammation and angiogenic pathways, our results suggest that CACs from T2DM are “proinflammatory cells” rather than “proangiogenic cells”. These conditions could depend from an increased “senescence status” of these circulating cells reached under hyperglycaemic conditions. The exposure to high glucose levels could induce the accumulation of dysfunctional endothelial senescent cells in T2DM patients shifting the transcriptional program of CACs from a “pro-angiogenic” to a “pro-inflammatory” profile, and increasing in turn the risk of developing micro and macrovascular complications. Our previous observation that telomere shortening in circulating cells from T2DM patients is related to the number of diabetic complications and that senescent CACs are present in patients with previous cardiac ischemic events [44, 45], further support this hypothesis.

Since several tissues are involved in diabetic complications, it is conceivable that all provide a relative contribution to circulating miRNA signatures. However, analysing plasma content of miRNAs it is impossible to establish which cell type contributed exactly to the circulating levels of a specific miRNA.

Epigenetic mechanisms, including miRNA deregulation, probably partly explain the increased risk of developing diabetic complications over time despite multifactorial interventions with glucose-lowering, lipid-lowering and anti-hypertensive drugs [46, 47]. This study provides proof of principle that circulating-based miRNAs signatures are dynamic biomarkers of the health status as a whole, and therefore significant modulations are expected depending from comorbidities.

We recommend that the presence of comorbidities must be taken into account when circulating miRNA-based signatures are proposed as diagnostic or prognostic biomarkers for the major ARDs.

A total of 193 T2DM patients from central Italy and 107 healthy control subjects (CTRs) gave their informed consent to be enrolled in the study. The study protocol was approved by the Ethics Committee of INRCA-IRCCS (Ancona, Italy). T2DM was diagnosed according to American Diabetes Association Criteria [20]. Inclusion criteria were: a body mass index (BMI) < 40 kg/m2, age 35 to 85 years, and ability and willingness to provide a written informed consent and to comply with study requirements. The information collected included information on vital signs, anthropometric data, medical history and behaviours, and exercise.

The presence/absence of diabetic complications was established as follows:

- retinopathy was defined as dilated pupils detected on fundoscopy and ⁄ or fluorescence angiography;

-neuropathy was established by electromyography;

-ischemic heart disease was diagnosed by clinical history and ⁄ or ischaemic electrocardiographic alterations; these patients had had ST- or non-ST elevation myocardial infarction, which was defined as a major acute cardiac event (MACE). Mean time from the MACE was 9±8 years;

Of the 193 T2DM patients with at least one complication, 37 had neuropathy, 11 had lower limb arteriopathy, 56 had MACE, 27 had nephropathy, 10 had chronic renal failure, and 84 had retinopathy.

Control samples (CTR) were selected among the husbands and wives of T2DM patients enrolled for the study. As microRNAs are epigenetic biomarkers, their expression is expected to be related with lifestyle and environment. Therefore, the choice of CTR among people living with diabetic patients is expected to minimize the effect of environment as confounding factor.

Prior to any therapeutic procedures, 1 ml of whole blood from each participant was collected into EDTA tubes after overnight fasting. Samples were immediately centrifuged at 3000 g for 10 min at room temperature, then centrifuged at 10,000 g for 5 min at 4 °C, and subsequently stored at -80°C until analysis. Samples were frozen within 3 h of plasma separation.

Data were analysed by the 2-∆Ct method. Relative expression corresponded to the 2-∆Ct value. For analysis of miRNA expression levels, external normalization to cel-miR-39 was applied.

Summarized data are shown as mean ± SD or as frequency (%). Analysis of covariance (ANCOVA) was used to compare the mean differences in chemical, clinical, and anthropometric variables after adjustment for age and sex (CTR subjects, and patients without and with diabetes complications). Multivariate analysis of covariance with miR-21-5p and miR-126-3p as the two dependent variables was performed to confirm the statistical significance of MACE complications.

Partial correlation, adjusted for age and sex, was used to test for correlations between miRNAs and the others variables. The association of T2DM complications with circulating miR-21-5p and miR-126-3p was also assessed for linear trend.

The authors are grateful to Word Designs for the language revision (www.silviamodena.com).

This work was supported by grants from:

None of the authors have competing interests.

GS, RL, AG, EM, LM processed plasma samples and carried out extraction and quantification of circulating microRNAs from plasma. RR, FM and FP processed and analysed miRNAs expression in CACs. MB, RT and RA recruited blood samples and managed the database. LS was responsible for statistical analysis. FO and ARB designed the study and drafted the manuscript. ADP and MB revised the manuscript critically. All authors read and approved the final manuscript.