The extended lifespan of the Ames and Snell dwarf mice is attributed to the attenuation of the insulin/IGF-1 signaling pathways [1, 2]. In these mice GH deficiency reduces production and circulating levels of insulin and IGF-1 [1, 3]. Reduced IGF-1 signaling affects insulin sensitivity suggesting that crosstalk occurs between IGF-1 and insulin signaling [4].

Control of mammalian aging by IGF-1is based on the increased longevity of hypopituitary growth hormone (GH)-deficient mice in which reduced IGF-1 expression and peripheral levels are characteristics of increased lifespan [5-7]. Subsequent studies of mice heterozygous for the IGF-1R [IGF-1R(+/-)] provided direct evidence that IGF-1 plays a role in controlling mouse longevity [8, 9]. Low levels of circulating IGF-1 are, therefore, a common feature of several long-lived mouse models (Ames, Snell, and IGF-1R(+/-)). Decreased mRNA and protein pool levels of the hepatic IGF-1 axis in Ames mice suggest that the regulation of genes targeted by the insulin/IGF-1-signaling pathway may contribute to physiological conditions supporting longevity [7]. Thus, in the Ames mouse, IGF-1 also regulates the insulin signaling pathway suggesting the involvement of insulin/IGF-1 crosstalk interactions.

In past studies we demonstrated that fibroblast cultures derived from young and aged Ames dwarf mice maintain their in vivo characteristics of resistance to mitochondrial generated oxidative stress [23]. Based on these observations we used these cells to address the question of whether: (a) IGF-1 stimulates the phosphorylation of the same IRS-1 Ser residues that are targeted by insulin; (b) the levels of Ser phosphorylation differ in WT vs. Ames dwarf fibroblasts; and (c) aging affects the levels and pattern of IGF-1 stimulated Ser phosphorylations.

We propose that the results of our experiments would provide information on the mechanism by which IGF-1 participates in the regulation of insulin-GH signaling and the determination of longevity.

The longevity of Ames dwarf [Prop1(-/-)] mice is attributed to decreased levels of tissue and circulating insulin and IGF-1[1, 3] and the differential phosphorylation of IRS-1 Ser residues may be part of the mechanism that regulates the altered insulin/IGF-1 signaling that promotes longevity. To address this we examined whether IGF-1 stimulates phosphorylation of the same IRS-1 Ser residues that are insulin-stimulated. The responses by the young Ames fibroblasts and their age-matched WT controls to IGF-1 treatment indicate that Ser307 phosphorylation is stimulated in WT fibroblasts by ~6-fold at 15 minutes and ~10-fold at 30 minutes and remains elevated up to 60 minutes of treatment (Figure 1A and 1B). On the other hand phosphorylation of Ser307 is severely attenuated in the Ames-derived fibroblasts suggesting that these cells maintain the characteristic decreased levels of insulin/IGF-1 signaling associated with Ames longevity. 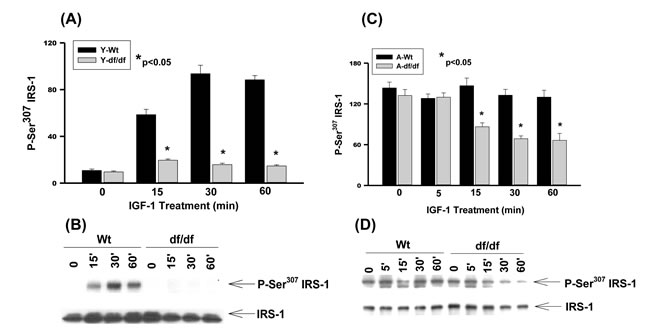 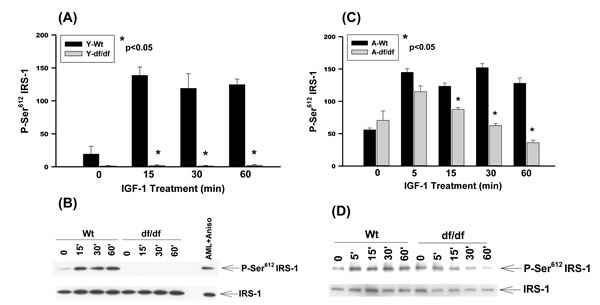 Similar analyses of the aged WT and dwarf fibroblasts show that the endogenous levels of Ser1101 phosphorylation are significantly lower compared to the young cells, i.e., ~3-fold in WT and ~2-fold in dwarf cells (Figure 4C and 4D). The IGF-1 treated WT and dwarf cells showed a similar response after 5 and 15 minutes of treatment; at 30 minutes, however, the phosphorylation was ~5-fold higher than its endogenous level which is the same as that seen in the young WT fibroblasts. These data indicate that the induction of IGF-1 phosphorylation of Ser1101 is delayed in the WT aged cells. Furthermore, there is a rapid loss of P-Ser1101 by 60 minutes so that the level of phosphorylation by the WT fibroblasts is the same as in the Ames cells. On the other hand there is also a lag period in response to IGF-1 in the aged WT fibroblasts that does not occur in the young cells. 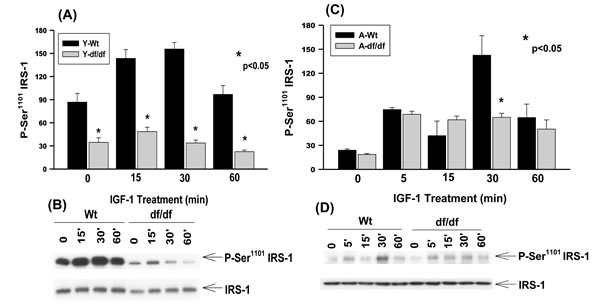 Using genetically identical young and aged WT and Ames dwarf fibroblasts we have identified specific Ser residues of IRS-1 that are substrates for IGF-1 stimulated phosphorylations and are the same as those for insulin stimulated Ser phosphorylation. We thus propose that this may be a crosstalk mechanism by which circulating IGF-1 participates in the regulation of insulin sensitivity and plays an important role in the hormonal balance between GH and insulin thus enabling them to regulate the same metabolic pathways [4]. Importantly, the levels of endogenous and inducible phosphorylation of Ser307, Ser612, Ser636/639, and Ser1101 are significantly higher in the WT fibroblasts suggesting that these epigenetic alterations in the Ames mice control the unique serine phosphorylation patterns that determine the physiological conditions of IRS-1 signaling associated with longevity. We thus propose that epigenetic changes associated with the hormonal deficiencies of the Prop1(-/-) mutation are stabilized and maintained in fibroblasts derived from these mice [23, 30, 31]

The insulin/IGF-1 and mammalian mTOR pathways are highly conserved physiological processes that protect against the development of the aging phenotype. The multiple physiological consequences of IRS-1 phosphorylations are seen in increased activation of the mTOR pathway along with enhanced phosphorylation of IRS-1 at Ser307 and Ser636/639 that occur in animal models of insulin resistance [30]. Thus, activation of the mTOR pathway leading to the down-regulation of IRS-mediated signals is a negative feedback mechanism which may be involved in the development of insulin resistance [33, 34]. Reduced insulin/IGF-1 signaling extends lifespan in both invertebrates and vertebrates [35, 36]. Thus, low levels of insulin and/or IGF-1 signaling (together with high insulin and IGF-1 sensitivity) are physiological characteristics that support extended lifespan of the Ames mutants [37]. That deletion of IRS-1 extends lifespan and increases resistance to several age-related pathologies in male and female mice is further support of this mechanism [9, 36]. These studies suggest that reduced IRS-1 dependent signaling is a robust mechanism for the modulation of mammalian lifespan.

It has been shown that the haploinsufficient IGF-1R(+/-) mouse down regulates the principle pathways stimulated by IGF-1 [8]. Embryonic fibroblasts derived from Igf1r(+/-)mice showed a 50% reduction in IGF-1R levels and a marked reduction in IGF-1 induced tyrosine phosphorylation of its substrate, IRS-1. This suggests that the down-regulation of IGF-1R in haploinsufficient mice down-regulates the principal pathways stimulated by IGF-1 and that the general decrease of IGF-1 via a decrease in IGF-1R can increase mammalian lifespan [8].

Phosphorylation of IRS-1 Ser307 exemplifies a common site that integrates heterologous inhibition of insulin signaling by multiple factors (See Ref.15 for a detailed Table). For example, Ser307 phosphorylation is stimulated by insulin, IGF-1, TNFα [38], anisomycin [36], fatty acids [39], amino acids [10] and C-reactive protein [40]. Our studies suggest that IGF-1 may act synergistically with these factors to promote Ser307 phosphorylation [41] and attenuation of IRS-1 and its targeted downstream pathways, e.g., PI3K and MAPK pathways [40, 42].

We propose that crosstalk between insulin and IGF-1 signaling is mediated by the phosphorylation/dephosphorylation of Ser/Thr and Tyr residues, and that this is the mechanism of regulation of the major pathways that target physiological functions associated with longevity determination.

The isolation of fibroblasts from young (3-6 mos) and aged (21-24 mos) wild-type and Ames dwarf mice has been described [23]. In this study, the fibroblasts at passage 4 or 5 were plated in 100 mm2 cell culture dishes (2x105 cells/dish) and cultured for 3 days in DMEM medium containing 15% FBS. The day before treatment, the medium was replaced with a medium containing 0.5% FBS. The recombinant human IGF-1 (Sigma) was prepared in distilled H2O and filter sterilized. The IGF-1 stock solution (25 ng/ml) was diluted in DMEM medium containing 0.5% FBS and the fibroblasts were treated with IGF-1 at a final concentration of 2 ng/ml. The cells were harvested and cytoplasmic and nuclear extracts were prepared [23]. The protease and phosphatase inhibitors were added to the extraction buffers prior to use [23]. The protein concentration of the extracts was determined using Bradford reagent (Bio-Rad).

Statistical analyses were performed for age-matched comparisons, the single dependent variable being the Ames dwarf mutants. The normalized values of protein and phosphorylated protein bands were analyzed using the 2-tailed t-test to test the mean difference between age-matched groups at a significance level of 0.05. The symbols (*) indicate statistical significance for the values represented by the bar or time-point.

This publication was supported by USPHS grant 1P01 AG021830 awarded by the National Institute on Aging; by 1 P30 AG024832 Claude D. Pepper Older Americans Independence Center grant and by the Sealy Center on Aging. J.P. thanks the Bertha and Robert Bucksch Distinguished Research Professor of Aging endowment for their support of this study. We thank Dr. Karon P. Cassidy for her rigorous review of the manuscript.

The authors have no conflicts of interest relevant to this manuscript.

2. Hsieh CC and Papaconstantinou J. The effect of aging on p38 signaling pathway activity in the mouse liver and in response to ROS generated by 3-nitropropionic acid. Mechanisms of ageing and development. 2002; 123:1423-1435.

6. Flurkey K, Papaconstantinou J, Miller RA and Harrison DE. Lifespan extension and delayed immune and collagen aging in mutant mice with defects in growth hormone production. Proceedings of the National Academy of Sciences of the United States of America. 2001; 98:6736-6741.

15. Paz K, Hemi R, LeRoith D, Karasik A, Elhanany E, Kanety H and Zick Y. A molecular basis for insulin resistance. Elevated serine/threonine phosphorylation of IRS-1 and IRS-2 inhibits their binding to the juxtamembrane region of the insulin receptor and impairs their ability to undergo insulin-induced tyrosine phosphorylation. The Journal of biological chemistry. 1997; 272:29911-29918.

17. Draznin B. Molecular mechanisms of insulin resistance: serine phosphorylation of insulin receptor substrate-1 and increased expression of p85alpha: the two sides of a coin. Diabetes. 2006; 55:2392-2397.

32. Brinks H, Das A and Koch WJ. A role for GRK2 in myocardial ischemic injury: indicators of a potential future therapy and diagnostic. Future cardiology. 2011; 7:547-556.