Apoptosis (programmed cell death) plays a critical role in maintenance of normal tissues homeostasis by elimination of the unwanted or damaged cells from organisms [1]. Evasion of apoptosis is a feature of many cancer cells that is involved in overexpression of Bcl2 (B-cell lymphoma 2) [2]. Bcl2 is a proto-oncogene to inhibit cell apoptosis in the tumor development. Deregulated expression of Bcl2 is linked to many human cancers, such as melanoma, breast, prostate, chronic lymphocytic leukemia, colon, and lung cancer [2–5]. The Bcl2 family proteins contain pro-survival proteins (Bcl2, Bcl-xl, Mcl1) and pro-apoptotic proteins (Bax, bad, Bim) [2, 3]. Under normal condition, Bcl2 constrains the pro-apoptotic proteins (Bax, Bak) to maintain the mitochondrial integrity and cell survival. In contrast, cytotoxic stimuli (chemotherapy or radiotherapy) activate pro-apoptotic proteins and induce cell apoptosis [1]. Although deregulated Bcl2 expression leads to impaired apoptosis that is a critical step in tumorigenesis, it is still unclear the mechanism to govern Bcl2 protein stability. 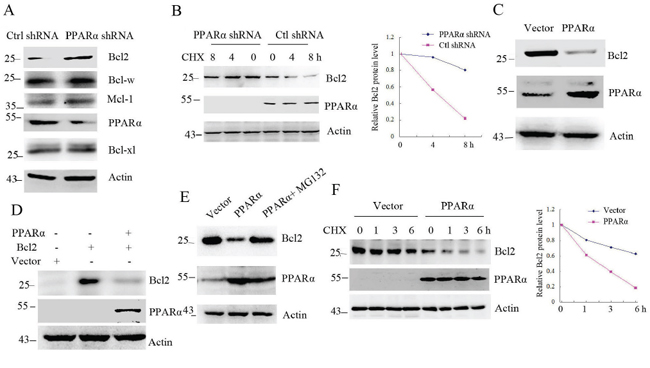 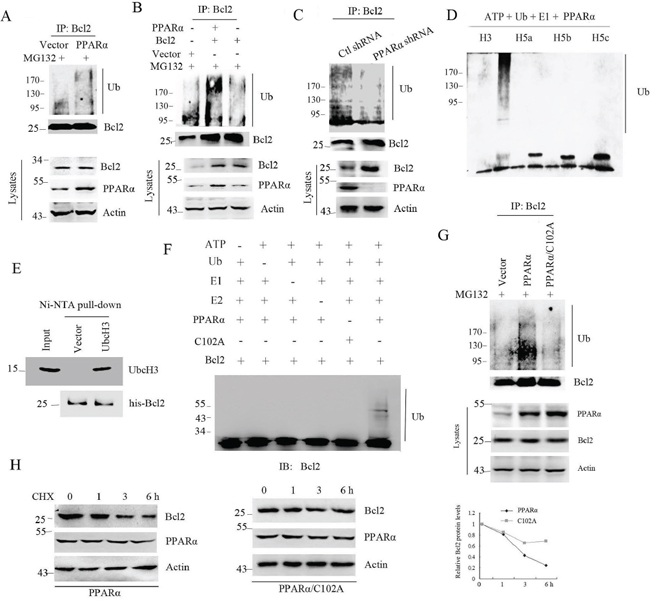 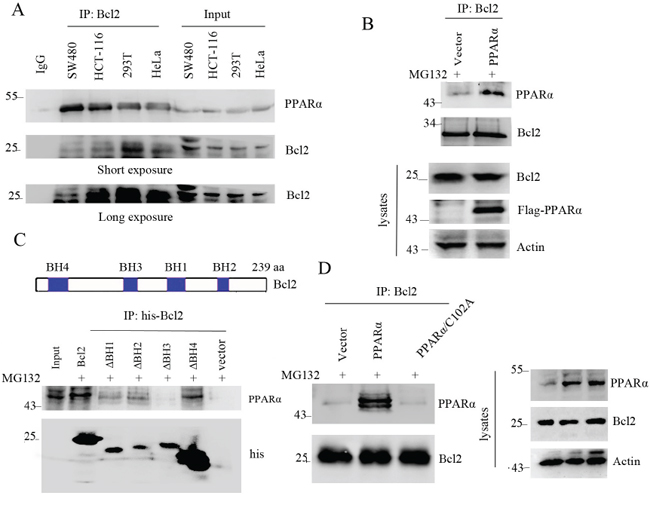 Ubiquitin is attached to the lysine residue on a substrate that will be recognized and degraded by proteasome pathway [6, 22]. To identify the specific lysine site for binding to ubiquitin, the four lysine sites were replaced with arginine (Figure 4A). Immunoprecipitation analysis shows that PPARα did not induce Bcl2/K22R mutant ubiquitination (Figure 4B) and degradation (Figure 4C). Consistent with this, PPARα did not reduce Bcl2/K22R protein half-life (Figure 4D). These findings show that lysine-22 was required for PPARα-induced Bcl2 ubiquitination and degradation. 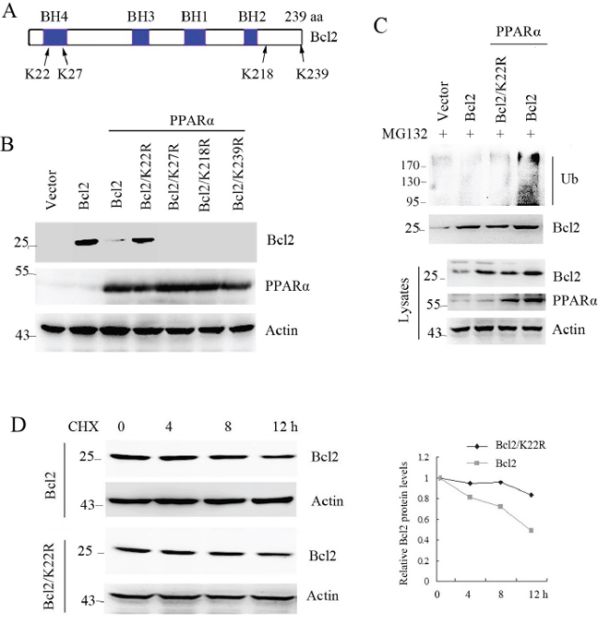 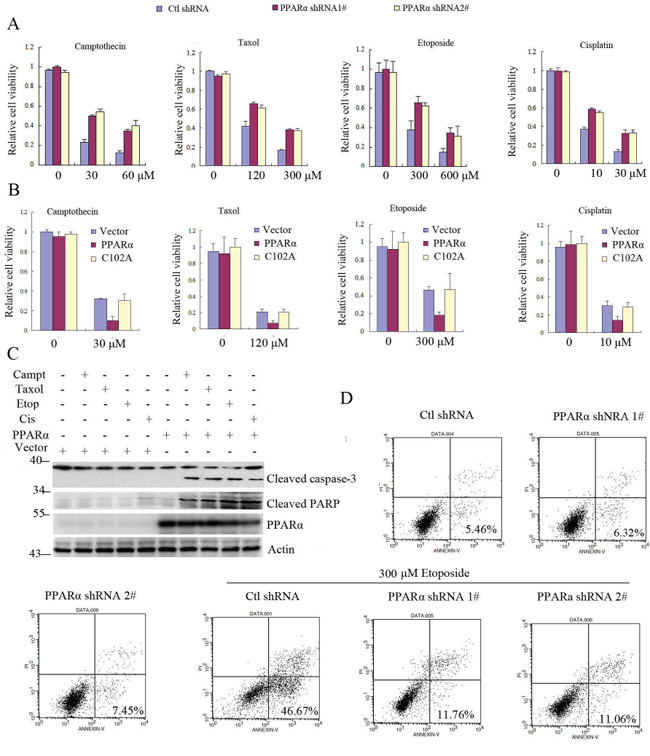 Evasion of apoptosis is a feature of many cancer cells that is involved in overexpression of Bcl2, which inhibits cell apoptosis and enhances chemoresistance [2]. Aberrant expression of Bcl2 is associated with many human cancers, such as melanoma, breast, prostate, chronic lymphocytic leukemia, colon, and lung cancer [2–5]. Therefore, inhibition of Bcl2 expression contributes to cancer therapy. Here we show that PPARα serves as a novel E3 ubiquitin ligase to induce Bcl2 ubiquitination and degradation. The canonical E3 ubiquitin ligases contain RING finger domain, which induces the substrate proteins for ubiquitination and degradation [23]. PPARα contains two zinc finger domains, and the cooperation of two zinc finger domains developed a RING domain. The PPARα E3 ubiquitin ligase activity was identified by in vitro ubiquitination analysis. The results show that UbcH3 but not UbcH5a/b/c was critical for PPARα-induced polyubiquitination formation, suggesting that PPARα was a novel E3 ubiquitin ligase. RING domains possess conserved Cys and His residues, which are critical for ubiquitin ligase activity [23]. As the residues of Y (number 3) and V (number 4) are not conserved C or H in loop 2 of PPARα, suggesting that loop1 could be a critical domain for PPARα E3 ligase activity. Consistent with this, C102A mutant of PPARα inhibited its E3 ligase activity. Previous report shows that PPARα enhances the colon cancer cell sensitivity in response to hydroxycamptothecin (HCPT) [24], while the mechanism is still unclear. Further analysis shows that PPARα significantly increased cancer cell sensitivity in response to chemotherapy drugs. These findings were consistent with PPARα-induced Bcl2 degradation. PPARα agonists (fenofibrate, Wyeth14,643, clofibrate) can induce cancer cell apoptosis and inhibit tumor angiogenesis in a PPARα dependent or independent manner [19, 21, 25–27], while our results show that these ligands had no significant effect on Bcl2 protein levels.

Taken together, PPARα functions as an E3 ubiquitin ligase to induce Bcl2 ubiquitination and degradation, leading to increased cancer cell sensitivity in response to chemotherapy drugs. These findings provide a potential drug target for cancer treatment.

Human PPARα or Bcl2 cDNA was subcloned into pcDNA3 vector. Plasmids were mutated by the site-directed mutagenesis method and were identified by DNA sequencing. Plasmids were transfected by turboFect transfection reagent according to the manufacturer's instructions (Thermo Scientific). PPARα shRNA plasmids (GV248 vector) were purchased from GeneCHEM (China).

Subcellular fractionation extraction or immunoprecipitation was performed as described previously [6]. For denatured immunoprecipitation to disrupt the non-covalent protein interactions, cell extracts were heated at 95°C for 5 min in the presence of 1% SDS, and then tenfold dilution of SDS. The samples were subjected to SDS-PAGE, transferred to a nitrocellulose membrane, then probed by Western blot analysis with the indicated antibody and developed by using an ECL reagent.

Data are expressed as the mean ± SEM. Statistical comparison was carried out with one-way analysis of variance (ANOVA) and Dunnett's test.

5. Rahman M, Chan AP, Tai IT. A peptide of SPARC interferes with the interaction between caspase8 and Bcl2 to resensitize chemoresistant tumors and enhance their regression in vivo. PLoS One. 2011; 6:e26390.