Here we reported a Chinese family from Sichuan China with a history of familial gastric cancer. We sequenced the germline DNAs from four of the family members and identified two rare mutations in ataxia telangiectasia mutated (ATM) genes, one of them resulting in a truncated protein. Using a TCGA dataset of 335 gastric cancer patients, we estimated the prevalence of ATM germline mutations and identified 9 deleterious mutations including 6 truncating mutations.

In routine clinical practices at Zhejiang Provincial People’s Hospital, we encountered a Chinese family from Sichuan province with a history of familial gastric cancer (Figure 1). The family has four members with gastric cancer, and two of them were diagnosed under age 50. 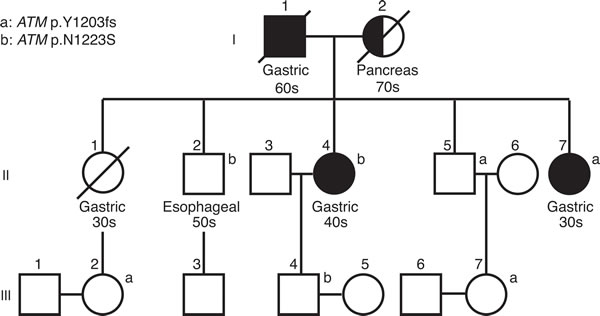 Figure 1: Pedigree of the Sichuan Chinese family. Individuals with gastric cancers are shaded in black. Half-shaded symbols indicate individuals with non-gastric cancers. Generation I-III are indicated. All the members of the family, excluding those who were deceased, were tested for two ATM mutations (ATM p.Y1203fs and p.N1223S). Age of initial diagnosis was indicated as 30s, 40s, 50s, 60s and 70s. Carriers for these two ATM mutations are indicated by a and b, respectively.

The proband’s older sister, individual II-4, was diagnosed with metastatic gastric carcinoma at age 41 and underwent a partial gastrectomy. A stomach biopsy of this patient revealed a moderately to poorly differentiated stomach adenocarcinoma with invasion into superficial layer of muscularis propria. Individual II-4 was tested negative for H. pylori infection.

We identified an average of 80.5 variants per individual in 83 genes (Supplementary Table 2). No mutations in CDH1 genes or mismatch genes were found. We prioritized the variants using the population frequency information from the 1000 Genomes Project [11], assuming the variants with minor allele frequency (MAF) greater than 0.01 to be benign or low penetrance. In total, we found 22 rare variants with MAF less than 0.01 or not reported in 1000 genomes database, none of which segregated with the gastric cancer in this family. Of the total 22 variants, the most interesting one was a frameshift deletion in ATM (NM_000051.3:c.3609delT, p.Y1203fs). Although it was not shared among all the affected individuals (found in II-5 and II-7), it was the most damaging mutation in all the genes tested. Interestingly, another rare non-synonymous mutation in ATM (c.3668A > G, p. N1223S) was identified in individuals II-2 and II-4, which did not co-occur with ATM Y1203fs in any of the four individuals.

Neither of the two ATM mutations was reported before. They are probably inherited from the parents of the proband, although we did not have their genomic DNAs to validate. To validate our findings, we sequenced the exon 25 of ATM in 12 members of the Sichuan family (individuals II-2, II-3, II-4, II-5, II-7 and individuals III-1 to III-7) using Sanger sequencing (Supplementary Figure 1). Individual III-2, one niece of the proband, had the p.Y1203fs mutation. She is in her 20s and unaffected. It is possible that her mother, the deceased patient (individual II-1), was also a carrier of p.Y1203fs. None of the spousal controls had mutations in ATM.

ATM is a well-known tumor suppressor but not a known predisposition gene for gastric cancer. The discovery of two rare ATM mutations (one is likely to be deleterious) in the family promoted us to investigate the frequency of deleterious ATM germline mutations in gastric cancer patients. We analyzed 335 cases in the stomach adenocarcinoma study reported by The Cancer Genome Atlas (TCGA) Research Network [12]. From the sequencing data of normal blood DNA of the 335 patients, we identified 3 different germline heterozygous frameshift deletions and 2 nonsense mutations in ATM, with one nonsense mutation (p.E1978X) occurred in two patients (Table 1 and Figure 2). We did not have any information on the relativeness of these two patients. The p.E1978X mutation was reported in ataxia-telangiectasia (AT) families before [13]. In addition, three rare nonsynonymous mutations may be damaging to the functions of ATM protein, as they were previously reported in AT patients (Table 1). The three missense mutations were considered deleterious by at least two in silico prediction methods (Supplementary Table 3). One of the three missense mutations, p.V2424G (c.7271T > G), was shown to be associated with increased risk of breast cancer in AT families [14]. Another missense mutations, p.R2032K (c.6095G > A) was also reported in familial pancreatic cancer families [15].

In total, 9 of the 335 patients were characterized as carriers of deleterious ATM mutations (Table 1 and Figure 2). To estimate the frequency of deleterious mutations in general population, we analyzed the variants reported in the phase 3 data of the 1000 genomes project. In 2054 individuals, we found four nonsense mutations, one splicing site mutation and one previously reported missense mutation in ATM (Supplementary Table 4). The frequency of ATM deleterious mutations was significantly higher in the gastric cancer patients than that in general population (9/335 for TCGA gastric cancer data vs. 6/2054 for 1000 genomes data; odds ratio = 9.41;the Fisher exact test, p = 0.0000435).

Among the 9 carriers of deleterious ATM mutations, two of them were diagnosed of gastric cancer before 50 years old, with the youngest age of onset at 41. The average age-of-initial diagnosis of these patients was 60.5, while the mean age-of-onset of all the noncarriers was 65.2. The difference was not statistically significant (Student’s t test, p = 0.098).

In the tumor DNA of the germline ATM p.R23X (c.67G > T) carrier in the TCGA dataset, a somatic frameshift insertion in ATM (c.1024dupA, p.V341fs) was reported [12]. The co-occurrence of a germline mutation and a somatic mutation in the same patient is consistent with a “two-hit” model for tumor suppressor genes. Other mechanisms of inactivating both alleles of ATM may also exist, such as chromosomal level deletions and promoter methylation. The impurity of stomach tumor tissues precluded our search for loss-of-heterozygosity directly from TCGA sequencing data. However, copy number loss at ATM locus was found in three samples of ATM deleterious mutations carriers, according to TCGA’s GISTIC analysis [12].

In search of other patients with germline mutation in ATM, we sequenced ATM genes in 20 additional patients in Zhejiang Renmin Hospital. We discovered a rare germline ATM mutation (rs55870064, c.4949A > G, p. N1650S) with minor allele frequency of 0.0024 in 1000 genomes project data in one patient. Sequencing DNA from his blood, tumor tissue and lymph node biopsy showed the complete loss of the reference allele and the retention of the mutant G allele in lymph node (Supplementary Figure 2). Loss of heterozygosity for ATM in this patient is also consistent with the tumor suppressor role of ATM. Interestingly, this patient’s family members had esophageal squamous cell carcinoma and leukemia (Supplementary Figure 3).

ATM is a kinase involved in cell cycle control and cancer development [16]. Biallelic inactivation of ATM results in Ataxia-telangiectasia [16, 17]. Germline mutations in ATM have also been associated with a moderately increased risk for breast cancer and pancreatic cancer [15, 18]. A predisposition role for ATM in gastric cancer was not known, although some evidence of excess risks was reported from Ataxia-telangiectasia family studies [19, 20].

In our study, we found a frameshift mutation (p.Y1203fs) and a missense mutation (p.N1223S) in ATM in a Chinese gastric cancer family. There are some limitations in our pedigree study to prevent us conclude the causal roles of either mutation. First, we only sequenced 83 selected genes and did not have information of mutations in other genes. Also, we only analyzed point mutations, small insertions and deletions thus may miss other types of mutations. Third, although the frameshift ATM mutation (p.Y1203fs) is likely to be deleterious, the individual II-5 who carry the mutation was not affected. It could be due to incomplete penetrance.

Nevertheless, the discovery of deleterious ATM mutations raises the question of the predisposition role of ATM in gastric cancer. By mining a public dataset, we found 2.7% of gastric patients of different ethnic origins have deleterious mutations in ATM, 2/3 of which would result in truncated forms of the encoded ATM proteins. In addition, we found the biallelic inactivation of ATM by both a germline and a somatic deleterious mutation in the tumor of one patient. These data supports an association of ATM mutations with gastric cancer susceptibility.

While we were preparing this manuscript, a GWAS study by Helgason et al. was published online, reporting the discovery of a gastric cancer association with loss-of-function mutations in ATM in a European population [21]. Our observation of a truncating mutation of ATM in a Chinese family of gastric cancer history, as well as the prevalence of deleterious ATM variants in patients of different ethnic origins are consistent with their results. Future work is needed to evaluate ATM mutations for risk assessment and therapy development in gastric cancer.

This study was approved by the Institutional Review Board of the Zhejiang Provincial People’s Hospital. Study subjects include 12 members of a Sichuan Chinese family and one patient from Zhejiang, China. Informed consent was obtained from all individuals or their family members for the biospecimens and medical records used in this study. To protect the privacy of the patients, data used in this study will not be deposited in public databases. Data used in this study could be requested from the corresponding authors pending approval from the family.

A total of 1μg DNA was used to generate genomic DNA libraries according to the protocols suggested by Illumina. A custom targeted capture kit was designed using Agilent Sureselect tools, covering all exons of the 83 genes (Supplementary Table 1). The total coverage of the chip was 434 kilobases. The target enrichment was performed using the Agilent SureSelect Target Enrichment kit (Agilent Technologies). The amplified DNA libraries were sequenced with the Illumina MiSeq Genome Analyzer (Illumina, San Diego, CA, USA), yielding 75 bp of paired end sequences.

Sequenced reads were then aligned to the reference human genome (GRCh37) using Burrows-Wheeler Aligner (BWA, v.0.7.10), and variant calls were generated by the Genome Analysis Toolkit (GATK, v 2.3.1). Sequencing statistics for each sample were listed in Supplementary Table 2. The coding regions of the 83 genes were selected for their association with cancer risk based on published evidences. Mutations were filtered for sequencing quality and depth of coverage.

Germline variants information for 335 gastric cancer patients was downloaded through TCGA data portal on Feb. 26th, 2015. Raw sequences in BAM format for 9 patients with deleterious germline mutations in ATM were downloaded from CGHub (https://cghub.ucsc.edu/). The access to these controlled-access data was approved by TCGA data access committee in Jan. 2015.

Variants were annotated using annovar [22]. Online databases including the Human Gene Mutation Database, the single nucleotide polymorphism database (dbSNP), 1000 Genomes, as well as online search engines (OMIM and LOVD) were used to search for previously identified variants. Only the mutations previously reported in ataxia telangiectasia patients are classified as deleterious mutations. For the unreported mutations, only nonsense, splice site mutations, frameshift insertions and deletions were considered as deleterious. The pathogenicity of missense mutations were predicted using SIFT [23], PolyPhen2 [24], and MutationTaster [25].

We are grateful to the families who generously provide their samples and time for this study. We appreciate the access of data generated in The Cancer Genome Atlas project by the NCI and NHGRI. Information about TCGA and the investigators and institutions who constitute the TCGA research network can be found at “http://cancergenome.nih.gov”. The research is supported by the National Natural Science Foundation of China (#81372598; #81071991; #31470069), and the Natural Science Foundation of Zhejiang Province (LZ12H16004).